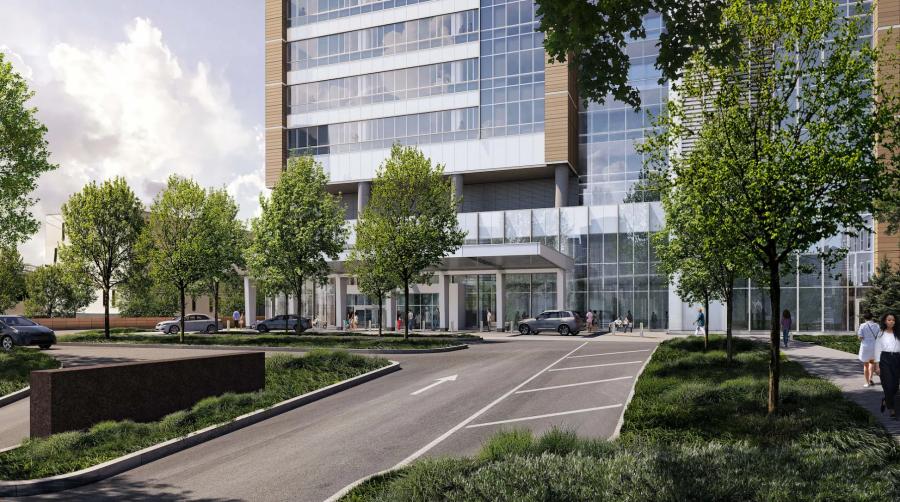 A rendering of the new neuroscience center. (Rendering courtesy of Shepley Bulfinch)

Construction is slated to begin soon on an $838 million, 505,000-sq.-ft. Neurosciences Center at the Yale New Haven Hospital's Saint Raphael campus. Connecticut city and state officials say the ultramodern facility will be transformative both in terms of the local economy and medical care.

Following the Yale project's announcement in April 2019, its construction was delayed due to the COVID-19 pandemic, CT Insider reported.

Now that the Neurosciences Center is back on track, though, scores of construction workers will descend on the job site at 659 George St. in New Haven.

In addition, once the last phase of construction is complete at the end of 2026, approximately 200 new health care and support jobs will be created, said Stephen Carbery, Yale New Haven Health's vice president of facilities.

The start of construction on the project was celebrated Aug. 31 with a ceremonial groundbreaking.

"This project is reflective of our commitment to the city of New Haven and the state of Connecticut," said Christopher O'Connor, president and chief executive officer of Yale New Haven Health. "It will set a new standard in neurological care."

New Health Center May Be State's Largest Ever

Yale New Haven Health officials describe the project as likely the largest hospital build in Connecticut's history. Mayor Justin Elicker added that it is certainly "one of the largest projects in [New Haven's] modern history."

Indeed, the Neurosciences Center will cover over half a city block, take more than four years to complete, and create about 400 construction jobs during peak work periods, Carbery told CT Insider.

The construction effort will require the demolition of four buildings on the Saint Raphael campus, he said, including a multi-story office building and the former convent of the Sisters of Charity of Saint Elizabeth, who founded what was then The Hospital of Saint Raphael in 1907. Yale New Haven bought the care facility in 2012.

The Neurosciences Center will consist of two towers with inpatient beds: The eight-story Sherman Tower next to Sherman Avenue and the seven-story McGivney Tower.

Each are designed to provide enhanced access to care for patients and will house 201 inpatient beds for treatment of those seeking care from multiple sclerosis and epilepsy to movement disorders like Parkinson's disease.

Both towers will share a common podium that will include a new entrance and main lobby on the first floor, as well as neurosurgery and radiology spaces on the second floor. Caregiver spaces and the center's mechanical equipment room will be on the third floor.

Carbery noted that Yale New Haven officials "have been at work on this for quite a while, moving around our operations so that this could happen."

"They are well regarded in the philanthropic community," he explained. "So, their leadership on this project is like a stamp of approval."

A 1959 Yale University graduate, Adams is an entrepreneur and co-owner of Camping World Holdings, which sells recreational vehicles and camping supplies.

"Yale is a world leader in neuroscience research, and discovery can happen at the bedside," she continued. "The center will bring the ability to learn from our patients."