Yoder & Frey Holds 2018 Florida Auctions; Rolls Out Slew of Auction Enhancements for Bidders From Around the Globe 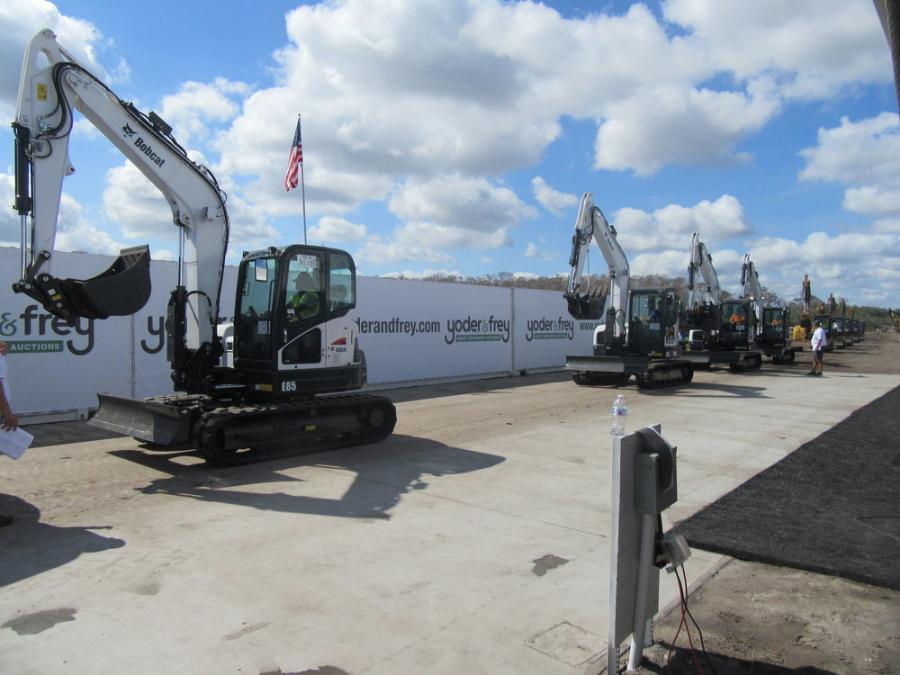 New for 2018’s Yoder & Frey Florida auctions, the company set up an auction ramp so attendees could bid from the comfort of a tent.

Bidders from around the United States and the world participated in person and online, making the sales a huge success for Yoder & Frey. Those who attended were greeted with several very noticeable positive changes and enhancements to the auction experience.

Just before the Florida auctions began in February 2017, a major announcement was made — Euro Auctions, a major player in the auction market, had purchased Yoder & Frey, an auction house that had been a major player in the Florida auction market since 1975. Both companies promised big changes would be introduced at the 2018 Yoder & Frey Kissimmee sale. Construction Equipment Guide (CEG) sat down and spoke with Jonnie Keys, general manager of Euro Auctions and Yoder & Frey, and Peter Clark, president of sales of Yoder & Frey to discuss these significant changes and improvements. 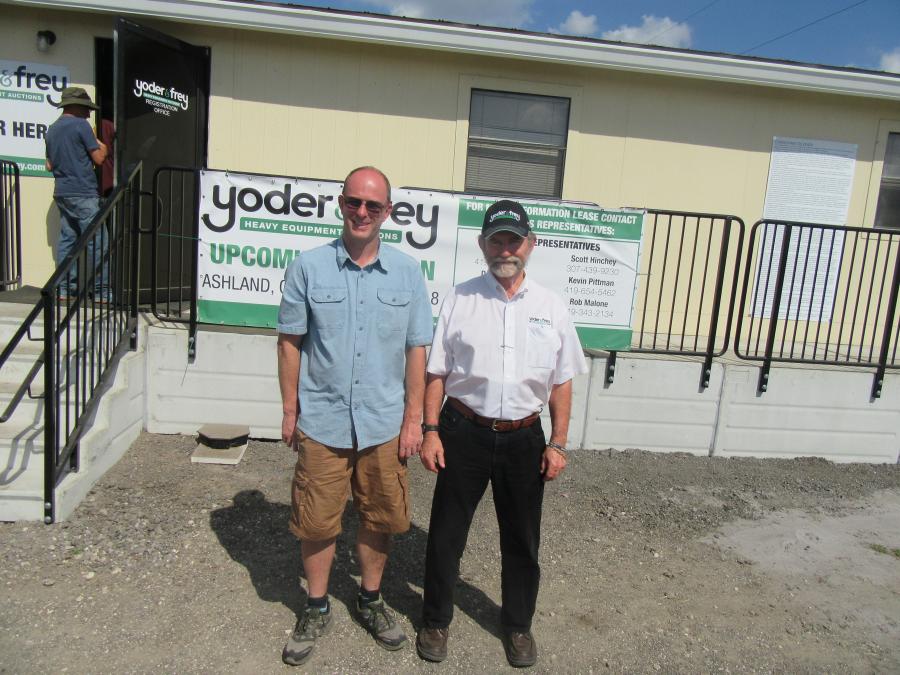 CEG: When we arrived at your sale site this year, it was very evident that you have executed a new plan for the sale. Could you give us an overview of some of the most significant changes that were made to your 2018 Florida auctions?

Keys: When we purchased Yoder & Frey, we bought an old name in the industry that had a great following and hosted a very successful sale for more than 40 years. We felt strongly that the most significant impact we could have on this operation was bringing their methodology up to date. For instance, traditionally auctioneers traveled to each piece across the massive yard of equipment to sell off individual items and the crowd of bidders needed to follow the auctioneer. 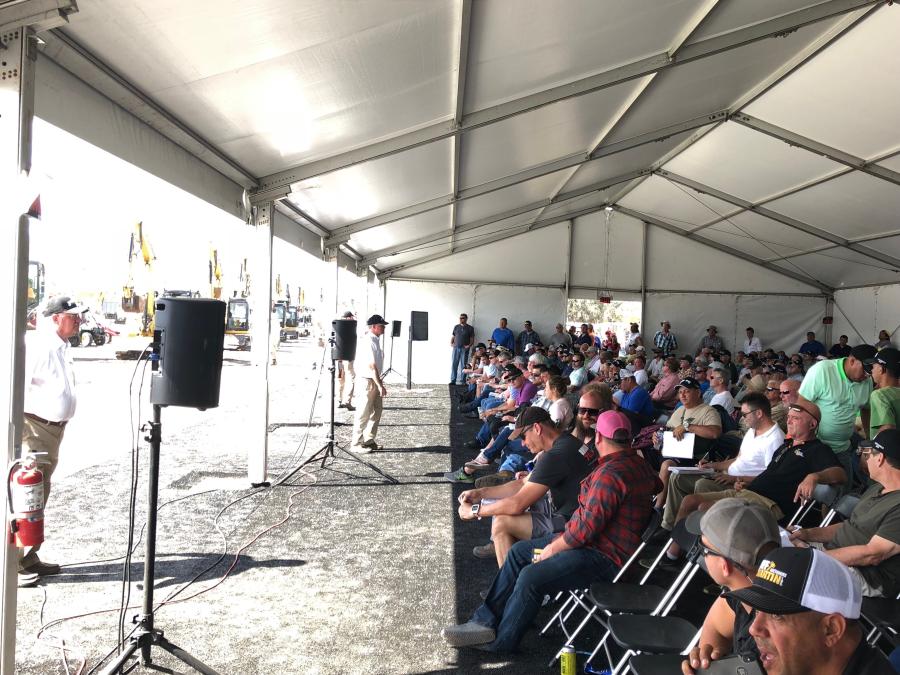 We have implemented a more contemporary approach by installing a permanent ramp that the equipment will travel across and we built an arena so that the bidders could sit comfortably, out of the sun, and do their purchasing without the hassle of chasing the auctioneer.

We moved our offices from the vendor show area to the sale ramp area, making it far easier for attendees to pick up their bidder numbers and immediately engage in the sale.

For the convenience of our consignors and the trucking firms that deliver equipment to our site, we built new loading ramps to simplify the process of getting equipment in and out of the site.

CEG: It certainly appears that the lineup of equipment here has changed dramatically. Have you accumulated newer equipment and more of it?

Keys: Our great successes in Europe have given us the resources to bring in the kind of equipment that you have noticed in your question.

Many of our relationships are in Europe and currently in the European market, there is an abundance of good later model equipment. For the past few years, the economy in Europe has been improving and the dealers, particularly in the United Kingdom, tend to turn their rental fleet inventory more often than the American dealers. That, combined with a favorable exchange rate, made it very possible for us to bring in millions and millions of dollars-worth of equipment that has been built to meet U.S. specs.

Another major change that we have made is a great benefit to the buyers: we have eliminated reserves at this sale. Ritchie Bros. has long had the policy that all items sold at their sale are sold to the absolute high bidder with no reserves and that's exactly how we operate in Europe, so the decision was made to move in that direction here in Florida.

CEG: Peter [Clark], has it been challenging for you, having been previously involved with Yoder & Frey for 43 years, to turn over the reins and work with a new management team?

Clark: No. Not at all. This transition has operated seamlessly. Euro Auctions has given us the resources to accomplish tasks that we knew needed to be addressed, but didn't have the resources to execute on our own. The ramp is perfect. It is a much better experience for our customers. The redesign of the yard makes for a much smoother operation. The economic force of Euro Auctions had loaded this sale up with a lineup of fresh machines like we have been unable to do in the past.

And eliminating the reserve certainly gives our buyers a much higher level of confidence in the value of what they are paying and it's comforting to know you're not bidding against the owner of the equipment or the auction company. This sale started back in 1975 when my father-in-law had a backer with a quarter-million dollars to put on a major sale during the construction of Disney World — a sale that we thought was a no-brainer. Major contractors from the Northeast and across the Midwest were completely shut down with long, cold winters and we felt strongly that if we gave them a reason to come to Florida with their families and buy equipment that they would certainly show up and they did.

That first sale in 1975 was a $2.8 million sale … $2.8 million. That's not a lot by today's standards, but it was huge by 1975 standards. Over the years, we have invested a lot of skin in this game and Euro Auctions has given us the opportunity to bring this to a whole new level.