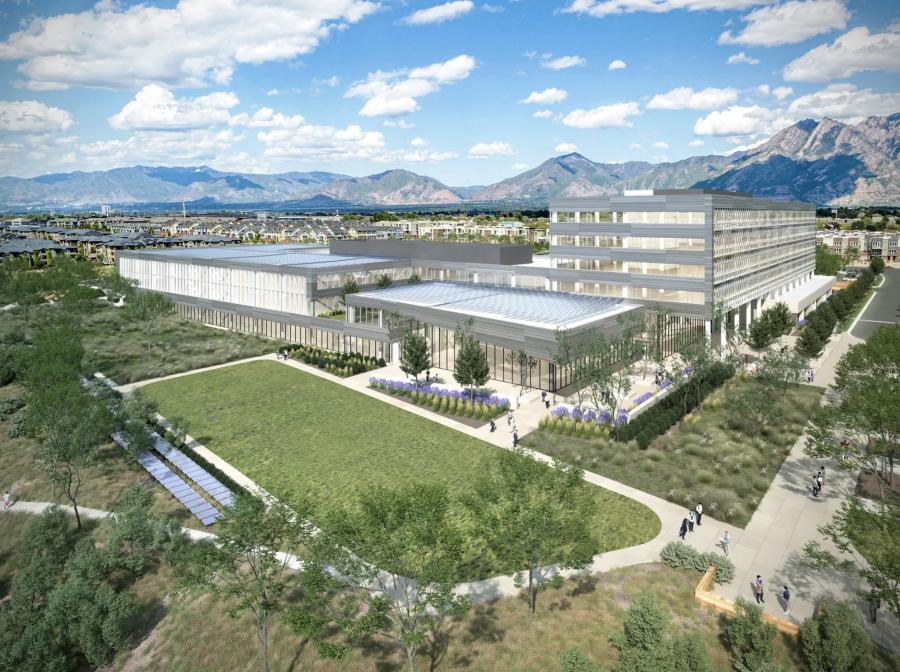 The sustainably built campus will be the $76 billion bank’s primary technology and operations center and is slated for completion in mid-2022.

Zions Bancorporation N.A. has broken ground on its 400,000-sq.-ft. technology campus planned for Midvale which will serve Zions' seven affiliate brands in 11 western states. The sustainably built campus will be the $76 billion bank's primary technology and operations center and is slated for completion in mid-2022.

Utah Gov. Gary Herbert, who was among the speakers at the Aug. 26 groundbreaking ceremony, said in a prepared statement the development will have a significant economic impact on the city of Midvale as well as the surrounding region. He noted Utah has gained a reputation for being a leader in the intersection of the technology and financial services industries and this project is critical to that ongoing growth.

The project, which is anticipated to achieve LEED Platinum certification, is being built on the site of the former Sharon Steel Mill, an Environmental Protection Agency Superfund site. About 1,500 workers will be employed during the construction project and about 2,000 Zions employees will work there upon completion. The bank, which is headquartered in nearby Salt Lake City, plans to eliminate 11 smaller facilities totaling 520,000 sq. ft. when the Midvale center is opened.

Officials said the site is being built to respond to changing work patterns in the years ahead and will provide employees with a highly flexible and engaging work environment. The campus will offer outdoor recreation opportunities, locker and shower facilities, shareable bikes and large modern café with healthy and diverse menu options. The building will be constructed with low VOC-emitting materials, triple-pane exterior glass and ultra-efficient heating and cooling systems. More than 75 percent of the building's electricity will be produced by on-site solar energy. The campus will also feature electric vehicle charging stations and offer proximity to the Historic Gardner Village light rail station. Situated on a bluff overlooking the Jordan River Parkway, the property will support a regional habitat system through ecologically focused design and landscaping.

The project is designed by award-winning architectural firms WRNS Studios and Method Studios. It will be built by Okland Construction and Layton Construction and managed by Gardner Co. Colliers International negotiated the transaction for Zions Bancorporation.