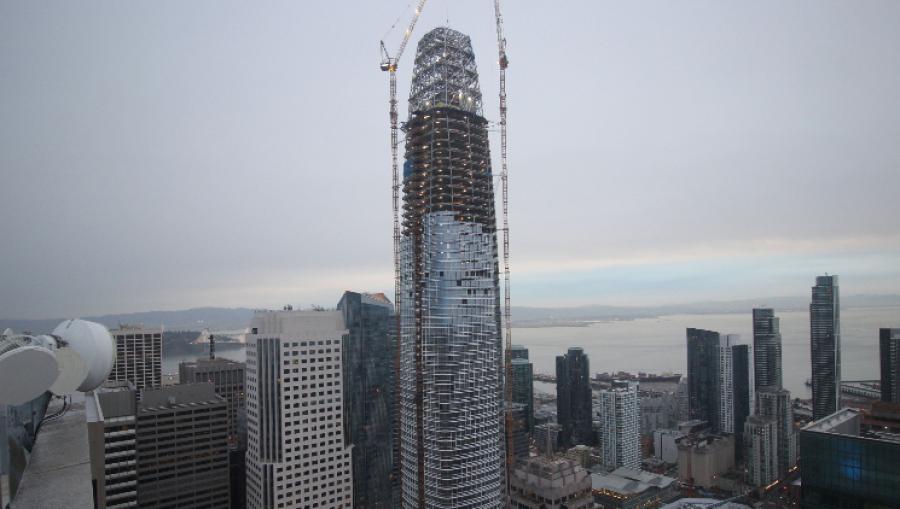 The $1.1 billion skyscraper has already changed the city's iconic skyline, towering over old favorites like Coit Tower and the Transamerica Pyramid.

The $1.1 billion skyscraper has already changed the city's iconic skyline, towering over old favorites like Coit Tower and the Transamerica Pyramid. Unlike in New York and Chicago, the new 1,070-foot (326-meter) high-rise is a gargantuan presence in this liberal West Coast city.

Salesforce Tower and a massive adjoining transit center also embody a larger transition in San Francisco — one that pits the technology industry against the city's charming neighborhoods.

Tech giant Salesforce.com, which provides online software for business, bought the naming rights to the 61-story steel and concrete building, adding to concerns that the tech economy is steamrolling through the city.

"All the tech and people the industry is bringing in . you can work two jobs and barely make a living for your rent and other costs," said Saul Ramirez, 25, who commutes over an hour daily to his San Francisco restaurant job from San Pablo after high rent pushed him from the city.

Salesforce Tower is City Hall's golden child, but the edifice has had to defend itself from the start. Former mayor and U.S. Sen. Dianne Feinstein has said she's annoyed the skyscraper soars far above the downtown height limits she pushed for in the 1970s and '80s.

Salesforce Tower is more than 200 feet (60 meters) taller than the Transamerica Pyramid, which previously was San Francisco's tallest building.

"A lot of people think that the city's defining characteristics are the hills, the water and the blue skies," said John King, urban design critic for the San Francisco Chronicle.

Salesforce will occupy more than half of the building's square footage, while consulting and investment powerhouses like Bain & Company, CBRE and Accenture will lease a portion of the remaining space. When the connecting Salesforce Transit Center opens, developers estimate the bus, train and promised high-speed rail station will serve 100,000 passengers on an average weekday.

"Cities evolve and change and grow everywhere in the world," said Boston Properties senior project manager Mirjam Link, noting the corporate high-rise will house up to 6,000 employees after construction wraps up in October.

Fred Werner, lead instructor of the Architectural Foundation of San Francisco, said he loves both the city's natural landscape and its skyline. San Francisco still has many areas with strict height limits, and concentrating growth in urban centers is the best way to accommodate an influx of people, Werner said.

Kate Borden, a 17-year San Francisco resident, has become a fan as she's watched the tower go up from her apartment window.

"It actually ends up reflecting the sunset, and I think it's really beautiful," said Borden, 37.

Salesforce Tower and Los Angeles' Wilshire Grand Center are competing for the title of "tallest building west of Chicago," a designation the Council on Tall Buildings and Urban Habitat has yet to award. The 1,100-foot (335-meter) Los Angeles high-rise wins by sheer height, but some argue its 295-foot (90-meter) decorative spire shouldn't count.

The top of Salesforce Tower has generated controversy of its own, with nine unoccupied floors set aside as canvas for LED artist Jim Campbell to display low-resolution images captured throughout the day by cameras placed around the city.

The electronic art display will be like a "carnival in the sky," said San Francisco Planning Commissioner Kathrin Moore, who believes the art makes the high-rise look like a children's playground.

Link believes criticism of the building will wane once the lights go on.

"Everybody will love the tower," Link said. "The art is amazing."