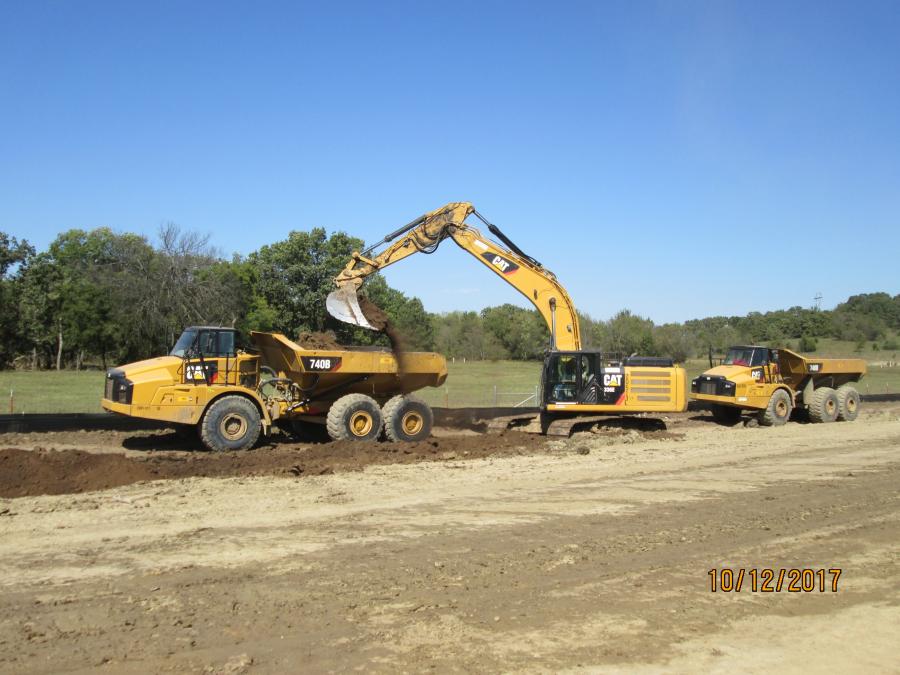 Crews are grading for two future lanes that will expand the stretch to eight lanes. (Oklahoma Turnpike Authority photo)

A $270 million Turner Turnpike expansion project, now under way in Oklahoma, includes widening a busy 22-mi. stretch of highway to six lanes on I-44 between Bristow and Tulsa.

The turnpike has been accident prone, so much of the design focus was on creating a safer turnpike. And the safety effort will continue, as well as adjustments for growth.

Crews are grading for two future lanes that will expand the stretch to eight lanes. Workers also are widening four county bridges that cross the turnpike from 18 ft. to the county standard of 28 ft.

And they will construct 12 new bridges that cross over the turnpike.

Oklahoma State Troopers will provide 24-hour surveillance throughout the project. In addition, service vehicles, wreckers and ambulatory services are being stationed at key points along the route.

Crews are constructing the project in three segments. The first 14 mi. is scheduled for completion in late 2018. The remaining two are expected to wrap up in 2019 and 2020.

Funding is provided through Oklahoma's Driving Forward Bond Program. The program is designed to ensure safe travel, relieve congestion and to shorten commutes.

It is in response to growth and increased use of highways in Oklahoma. The Turner Turnpike has seen increased usage in recent years.

“Traffic has increased along the entire Turner Turnpike, but specifically at the east end,” said Joe Echelle, director of construction for the Oklahoma Turnpike Authority. “We've seen an increase in congestion-related accidents.”

In April of 2017, the Oklahoma Turnpike Authority awarded a $27.1 million contract to Sherwood Construction to widen the Turner Turnpike to six lanes between the Bristow area and Tulsa. The first phase of construction began in July 2017.

The project involves about 3 mi. of work between mile marker 210, near the Kellyville exit, and mile marker 207.3, near the service plaza for westbound traffic.

Poe and Associates of Oklahoma City was hired as program manager for the Driving Forward Bond Program. EST Inc. and Atkins Global, both of Oklahoma City, oversee the construction project.

Some of the major subcontractors for the project include Sherwood Construction of Riverside, Calif.; Duit Construction Co. of Edmond, Okla.; and Advanced Workzone of Muskogee, Okla.

About 200 workers are at the job site six days a week.

The Turner Turnpike expansion is part of the Oklahoma Turnpike Authority's $935 million Driving Forward initiative, financed with bonds that will be repaid through higher turnpike fees. The fees were raised in March and are scheduled to increase again in 2018 and 2019.

Current work on the project includes widening of the existing turnpike in some areas. In other areas, workers have begun median reconstruction.

Crews are busy with a variety of heavy equipment on site, including scrapers, bulldozers, dump trucks, track hoes, a crane and asphalt mixing machines.

In terms of dirt, the project has cut away more soil than what needed to be brought in. So, the contractors are moving the extra soil to neighboring properties under separate construction contracts.

As for the overall success of the project so far, Echelle reports that delays have been minimal and have not affected the mainline construction so far. Most of the early delays were caused by problems in locating utilities.

Road crews have already started construction on the project that will widen the Turner Turnpike from 4 to 6 lanes. One lane will be added to both the eastbound and westbound lanes.

The Oklahoma Turnpike Commission said that the widening project will pave the way for “truck-specific” lanes in the future.

In addition to widening the lanes, crews also will be adding safety features like lights. The Oklahoma Turnpike Commission reports that in the last five years 15 fatal accidents and 514 wrecks have occurred on the 20-mi. section of turnpike.

The Governor Roy J. Turner Turnpike was authorized by the Oklahoma Legislature in 1947 and opened in May 1953. It is the oldest of the state's ten turnpikes.

The route is signed as Interstate 44 for its entire length, but was constructed prior to its designation as the interstate. The Turner Turnpike was named after Gov. Roy J. Turner, who pushed for efforts to build this toll road to connect the state's two largest cities.

The route begins north of Oklahoma City, as Interstates 35 and 44 and SH-66 approach it from the south. I-35 and SH-66 split to the north, and I-44 begins its journey eastward as the Turnpike. Traffic also may travel west at this point, along the John Kilpatrick Turnpike.

It ends 86 mi. later, southwest of Tulsa, at a junction with SH-66. The posted speed limit is 75 mph, making it possible to drive legally from Tulsa to downtown Oklahoma City in less than 90 minutes.

Four lanes are expected to be open for the duration of the project, except on rare occasions, when nighttime lane closures will be necessary.