The project also maintains mobility and continuity of public access along the coast and to the shore including parking at each end of the project. 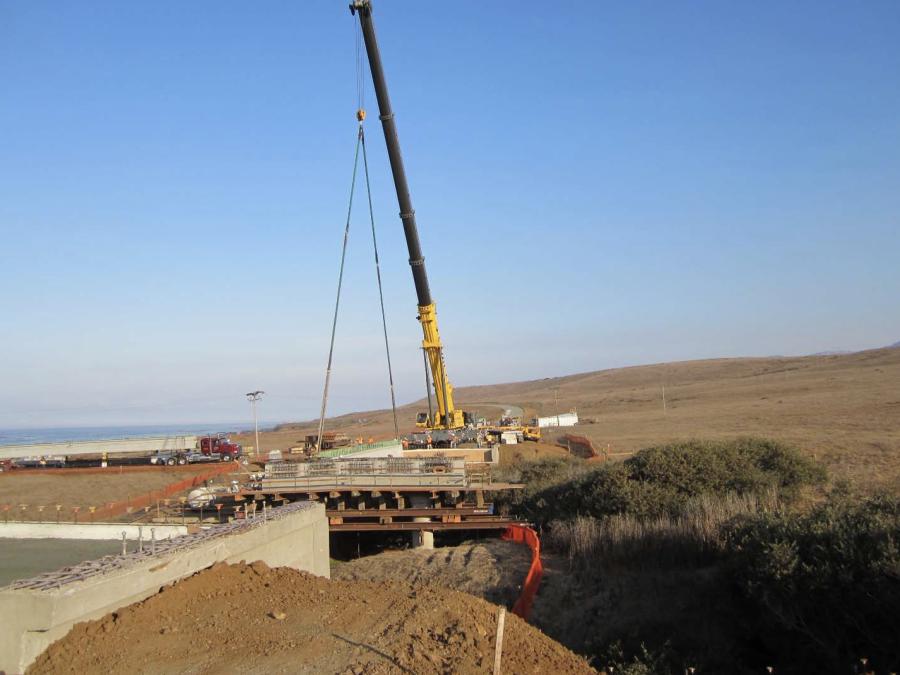 Work is surging ahead on a $54.5 million Highway 1 Piedras Blancas realignment project to protect the highway from a rising sea level and erosion along the coast in San Luis Obispo County.

The project area runs along Highway 1 from Point Piedras Blancas to Arroyo De La Cruz Bridge near San Simeon. Crews began realigning the highway in fall of 2015. Nearly 3 mi. (4.8 km) of the highway will be realigned.

Crews will reconstruct the roadway up to 475 ft. (145 m) inland of the existing alignment. The project will provide two 12-ft. (3.7 m) lanes with 8-ft. (2.4 m) shoulders and a left turn lane and driveway access at the former Piedras Blancas Motel, which is currently part of the Hearst-San Simeon State Park.

The project also maintains mobility and continuity of public access along the coast and to the shore including parking at each end of the project.

The project is needed because of severe coastal erosion of nearly 5 ft. (1.5 m) per year in some areas. Highway 1 has been temporarily mitigated through placement of rock slope protection at the highway shoulder and minor realignment over the past 17 years.

The project will protect the realigned highway for approximately the next 100 years and will provide for continued highway operation while recognizing the need for public access to the coastline and protecting sensitive resources.

Realignment is expected to continue through winter of 2018, followed by landscape work.

Funding for the project is provided through California's State Highway Operation and Protection Program (SHOPP), which includes federal and state funding. The project is fully funded by the SHOPP with an additional $18,361 to fund two follow-on mitigation projects.

Besides being built for long-term use, the new wider roadway is designed for safety. And positioning of the new roadway is consistent with state guidelines for accommodating sea level rise.

Waves could pose a risk to safety if the project was not completed because of debris deposited on the highway and waves overtopping the highway during storms and high tide events.

Contract for the project was awarded on May 27, 2015. Construction completion is expected by March 2018, weather permitting.

After submitting a bid of $19.72 million — the lowest bid among five bidders — Papich Construction Co. Inc. of Pismo Beach, Calif., was chosen as contractor for the project.

About 25 workers are at the project site each day.

“They are working on paving and finishing the bridge work,” said Paul P. Martinez, project manager.

To make way for the new highway stretch, two homes situated in the highway's right-of-way will have to be demolished.

When it is complete, 73 acres will be added to Hearst San Simeon State Park and 3.5 mi. (5.6 km) of new California Coastal Trail will be created. The added trail will be constructed by State Parks with funding from Caltrans, Martinez said.

Planning for the project began in 2001, when the ocean began to encroach on parts of the highway. Coastal bluffs in the area recede an average of nearly 5 ft. a year.

In one location north of the Piedras Blancas Motel, an artificial rock embankment and concrete traffic barriers are the only things that separate the ocean from the highway.

“Approximately, 930 ft. of rock slope protection and 638 of concrete K‐rail are placed at the edge of the traveled way,” Martinez said. “The rock and K‐rail will be removed and the bluff restored to more natural conditions.”

Even with rock and K-rail, waves sometimes break over the barriers, especially during periods of high swells.

The realignment is expected to disturb wetlands and California coastal prairie, a grassland plant community that is habitat for many rare and endangered species. To compensate, Caltrans will restore more than eight acres of wetland and 21 acres of coastal prairie.

The existing Highway 1 will be removed and restored by Caltrans as part of the highway project.

The project includes restoration of the existing highway to natural conditions and restoration and enhancement of 12 acres of off-site state parklands to mitigate impacts to disturbed areas.

All of the land west of the realigned highway will become parkland.

Caltrans is providing $1.4 million in funding for the trail, which will be constructed by State Parks. The trail will connect the existing network of bluff‐top trails. Bicycles will be allowed to use either the highway shoulder or the trail.

Along with bluff-top trails, California State Parks plans to create a network of boardwalks and beach access points.

The project will provide for continued highway operation while recognizing the need for public access to the coastline and protecting sensitive resources.

Crews will restore natural functions of creeks by replacing three significant crossings with bridges. The project maintains hydrologic connectivity of wetlands by use of permeable roadway sub-base materials.

Views are considered important, so the project allows for shoreline views and increases long-range views because of a higher highway elevation.

To help maintain the natural look of the area crews will relocate utilities underground within the roadway and will use contour grading to reduce erosion and promote growth of native vegetation.

The reasons for the interest are many. Highway 1 is a State Scenic Route, a National Scenic Byway and an All-American Road. It is designated as a Pacific Coast Bicycle Route.

The project is within the coastal zone, adjacent to the Monterey Bay National Marine Sanctuary and the Piedras Blancas State Marine Reserve. It also helps in development of the California Coastal Trail, which is expected to draw more visitors to the area.

The project will impact biological resources, wetlands and potentially change the visual experience at some locations along the new roadway. The project includes mitigation measures to reduce these impacts to less than significant. Biological mitigation includes planting natural vegetation as part of restoring the existing highway area to more natural terrain. A mitigation site north of the Arroyo de la Cruz Bridge will create wetlands and a breeding pond for California red-legged frogs and provide additional coastal prairie and coastal scrub lands.

They also will consult with the U.S. Fish and Wildlife Service and National Marine Fisheries Service.

Truck traffic is adding extra volume to the roads as materials and equipment are brought in and out, but weekdays in winter, traffic is generally light and crews have not been working on the weekend when traffic is greater. The current average daily traffic is estimated at about 3,000 vehicles.

Large waves and drought have made work more challenging. At the beginning of the project, large waves inundated Arroyo Del Corral without breaching the beach sand bar allowing elephant seals to enter through the culvert under the existing highway and frolic in the work area at the bridge site.

Also, drought in California has made it difficult to harvest adequate amounts of seed from native plants that are required for use as erosion control and planting by the project's permits. Changes in seed mix and quantities could affect vegetation coverage.

Prior to construction, the contractor was required to remove and stockpile the topsoil for use in dressing the final slopes. Growth has been satisfactory but the vegetation will be monitored.

Seed gathering for the follow-on mitigation project also will likely be limited so the contract will be split to allow a three year gather and propagate period prior to beginning the actual mitigation project.—CEG