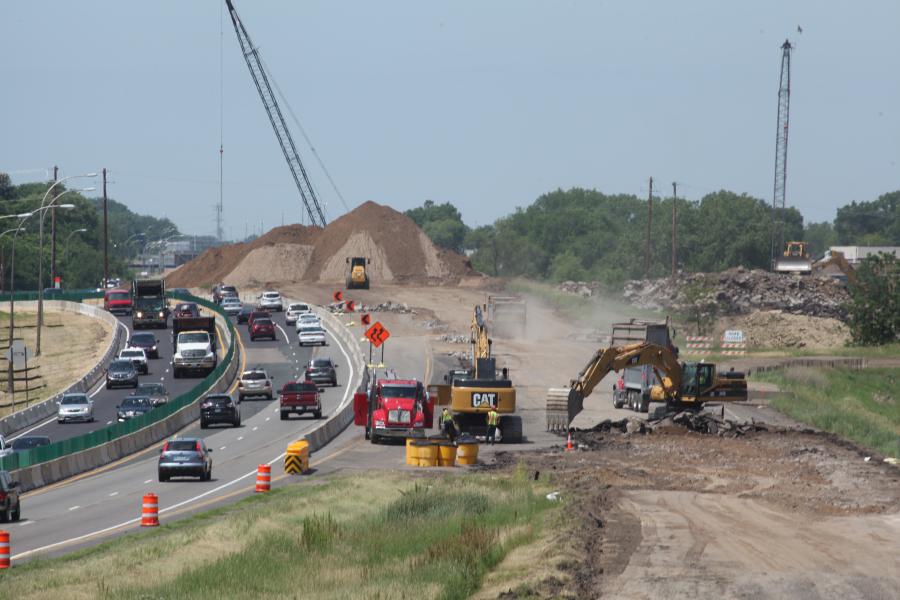 MnDOT awarded the $13 million contract to Ames Construction, based out of Burnsville, Minn.

For years, motorists driving below the long lived 80-year-old TH 36 bridge crossing over Lexington Avenue in Roseville, Minn., have seen the scaling of concrete from the shallow arch above them. Despite its rugged appearance, the arch and its solid concrete façade continued to hold onto its strength and grace.

Bridge inspections over the years, though, by Minnesota Department of Transportation (MnDOT) inspectors showed that while it was still safe to carry the 85,000 ADT, it eventually would need to be replaced.

MnDOT constructed the original bridge over Lexington Avenue in 1937 and earned a good return on its investment as traffic volumes grew over the years. Yet, along with its low structural rating and obvious aesthetic blemishes, maintenance costs were piling up, its geometrics were out dated and the arch construction limited bridge clearances below.

Last summer, bridge crews did something about it. They demolished the old bridge and recently completed two new bridges with wider shoulders carrying two lanes of traffic each direction. Along with the bridge work, crews constructed a total of 1.1 mi (1.8 km) of five lane highway.

MnDOT awarded the $13 million contract to Ames Construction, based out of Burnsville, Minn. The company is a full service heavy civil and industrial general contractor with offices throughout the United States and Canada.

For this project as the general contractor, Ames crews also took on the bridge and excavation work. The company brought on several other contractors to manage the lighting, railing, erosion control, signage and striping work.

TH 36 is a popular east/west commuter highway and vital connection between I 35W running through Minneapolis and I 35E running through St. Paul. Just west of the bridge, the highway brings drivers to a 1 sq. mi. (2.6 sq km) high density, shopping destination packed with two large shopping malls surrounded by busy strip malls and dozens of commercial businesses.

Lexington Avenue is a popular local arterial and runs for approximately 15 mi. (24 km) from the south side of St. Paul through several northern suburbs and links up near I 35E in Lino Lakes, Minnesota.

“We needed to take out the old bridge, build two new bridges, build up the grade for the new highway lanes and build the ramps.”

Working with Ames as the prime contractor on this project, Rustad said, “it's nice to be able to work with one prime and not as many sub-contractors. They can control the schedule and work flow that much better.”

Work began in mid-April when the local electric utility rolled in to move a string of power poles and line farther out from the construction site to add more swinging space for a Terex HC 50 crane Ames crews would move in.

With the pole line quickly relocated in three days, Ames crews closed down Lexington Avenue, dug in and wasted no time building a temporary, four lane bypass to wrap around the bridge demolition and construction site.

As traffic continued to roll on the existing highway, road crews protected by concrete barriers worked safely inside a large swath of MnDOT right-of-way (row) on the south side of the highway and began building from the bottom up a 1 mi. (1.6 km) four lane temporary highway surface.

Equipment operators at the controls of a variety of Cat equipment including backhoes, graders and dozers dug temporary sewer lines, pushed fill and graded the road base. Just after six weeks of construction, dumping an estimated 18,000 cu. yd. (13,800 cu m) of fill, lining the bypass with roughly 7,000 ft. (2,100 m) of concrete barriers and placing 5,600 tons (5.7 t) of asphalt, crews opened the by-pass to traffic.

When crews switched traffic to the temporary by-pass, the clock started ticking on the A and D Contract. Sixty days to build the bridge and 110 days to re-open Lexington Avenue below it.

New highway and bridge construction began immediately. Resembling a giant sand box through the summer, equipment operators free of traffic had plenty of room to roam and strip pavement, dump fill and grade the road base as construction progressed on the bridge.

The biggest challenge on this project was the rain, but it failed to bring work to a complete halt and cause serious traffic delays.

“Every time a storm came through which was at least once a week, we were getting two to four inches,” said Rusted.

The heavy rains forced some random lane closures to make slopes yet did not cause any significant inconvenience to the traveling public.

“There was always something to do and somewhere they could work with the rain,” Rustad said. “The mainline wasn't affected that much. It was in the low areas, building the ponds, the ramps and our slopes. Sometimes we had to wait a day or two to let things dry out.”

Ames crews hit their first milestone of the project when they opened the new westbound lanes to traffic in September while road work continued on the eastbound lanes and traffic continued to roll eastbound on the temporary bypass.

Just days before the bridge open to traffic, the local electric utility moved back in and closed the westbound lanes for one night during the work week to re-string the power line crossing above the highway.

Because the above average rainfalls began eating into the project schedule, MnDOT extended the time frame for Ames crews to open Lexington Avenue within 120 days. With the 10 day extension and the contractor working 12 hour days, six days a week, Ames crews met the amended deadline date to have traffic rolling on all highway lanes and Lexington Avenue below by the middle of November.

The wet weather pattern crews battled all summer began to dry out in September and October.

Though not in the original plan, MnDOT took advantage of the drier and above average temperatures to shut down the eastbound lanes of the by-pass during the last weekend in October to pave the new eastbound lanes, install guardrail and mill and overlay the ends of the road.

Throughout the construction season, annoyances to the traveling public were few and relatively painless compared to other highway projects. Except for the rare lane closures and the tighter curve on the temporary pavement forcing the speed limit to be cut to 45 mph, drivers always had four traffic lanes throughout the length of the project.

Even below the bridge, the closure of Lexington Avenue was manageable because there were other, nearby roads local traffic could dump into.

Because of the 85,000 ADT and the huge shopping hub a prime destination, building the bridge and road under traffic conditions wasn't an option, Rustad said.

“All day long there is traffic on this highway. There was no way to go down to one lane each direction. We would have caused traffic back-ups all day and worse during peak hours,” Rustad said. “So, reducing lanes just were not an option.”

Ames crews will be completing minor punch item work will this spring. CEG