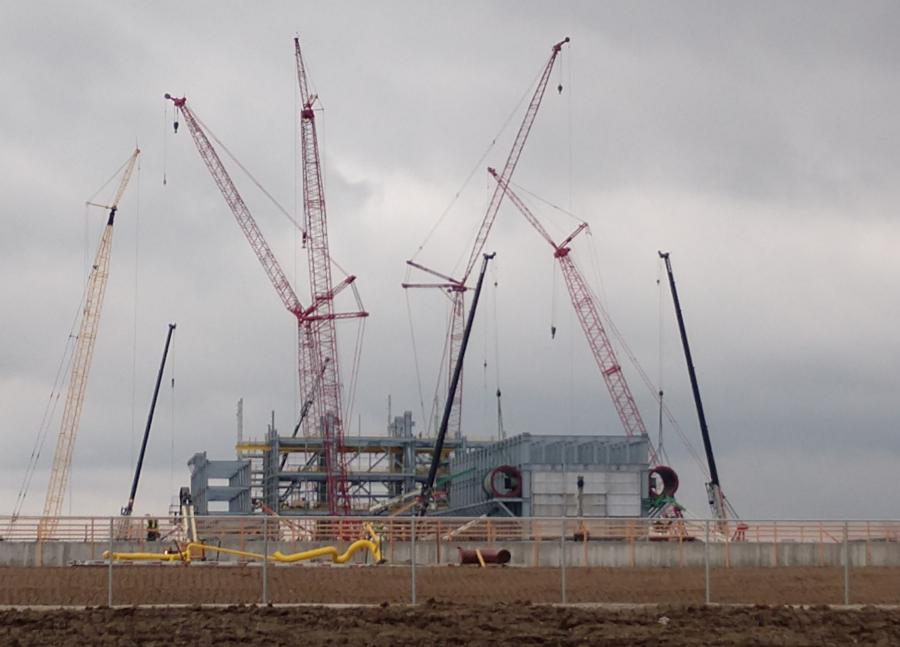 When the new Cleveland-Cliffs hot briquetted iron (HBI) plant in Toledo, Ohio, opens next year, the $830 million plant will have the nominal capacity to produce 1.9 million metric tons of HBI per year. (Ironworkers Local 55 photo)

Considered the largest construction project in the Great Lakes, the new Cleveland-Cliffs hot briquetted iron (HBI) plant in Toledo, Ohio, is already being described as a landmark facility. When it opens next year, the $830 million plant will have the nominal capacity to produce 1.9 million metric tons of HBI per year.

"It's truly amazing to see a project of this magnitude take off," said Joe Cappel, vice president of business development of the Toledo-Lucas County Port Authority. "Currently, the largest crawler crane in the world, with a 3,000-ton lift capacity, is at work helping construct portions of the furnace, which will be visible for miles. Coordinating the volume of construction workers and sequenced activities is truly a team effort. There are road improvement projects happening simultaneously with building construction, site work, conveyor installation and utility work on a massive scale."

In 2008, the former Chevron refinery brownfield site was acquired by the Port Authority, so the port area could be expanded, and direct access could be gained to a second Class I railroad. Improvements were made to the site, and in 2014, the facility officially opened as the Ironville Marine Terminal operated by Midwest Terminals.

Infrastructure and transportation access were fully restored at the site that allowed the receipt and transfer of bulk, break bulk and liquid cargo between vessel, rail and truck. In 2017, Cleveland-Cliffs announced they would lease and use 100 acres of the facility to construct a hot briquetted iron production facility.

"The HBI plant will process [more than] two million tons of iron ore and produce hot briquetted iron units that will be utilized by electric-arc steel furnaces for steel production throughout the Great Lakes region," said Cappel. "The Port Authority, Midwest Terminals, the state of Ohio, city of Toledo, Lucas County and many others were very supportive of this development, and helped accommodate and welcome Cleveland-Cliffs into the community, assisting with an incentive package and other aspects of planning the project throughout the site selection decision-making process." 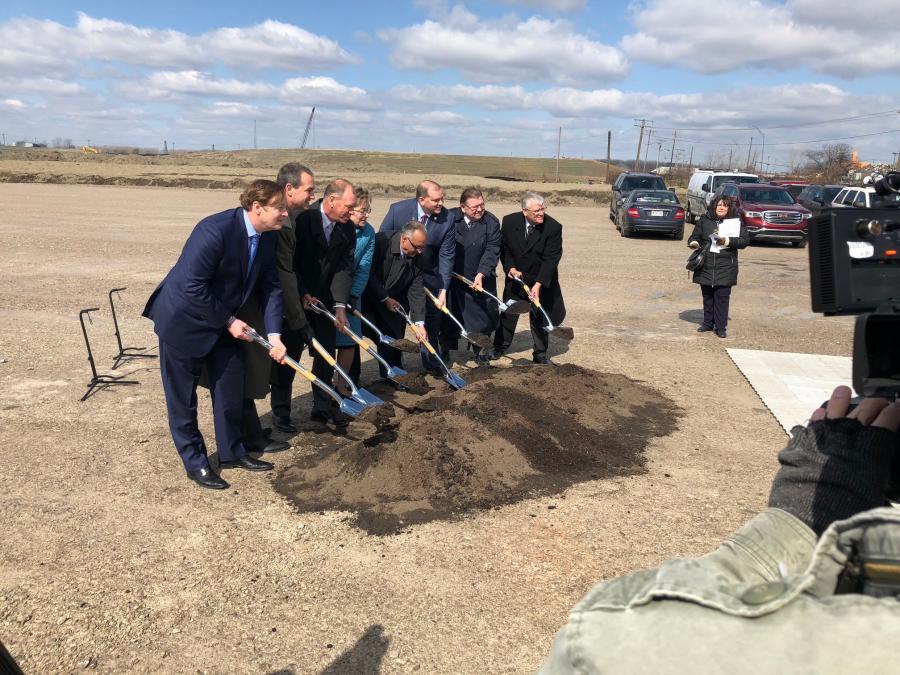 Cleveland-Cliffs broke ground on the project in April 2018, with numerous dignitaries turning out for the ceremony. Cappel noted that while the total economic impact of the highly-anticipated plant is not currently known, more than 1,000 construction jobs and 130 permanent jobs will be created. And that's only the beginning.

"There are countless related benefits to transportation companies, hotels, restaurants, suppliers and other service providers," said Cappel. "The plant also is good for the U.S., and, more specifically, the economy of the Great Lakes Region. U.S. iron ore will ship to Toledo on U.S. vessels to the plant where U.S. natural gas will be used to produce U.S.-made iron units. Those iron units will ship to mills to produce steel that will be used to make U.S. automobiles, appliances and other products.

"The economic impact of such a product is exponential in nature, and has a more profound impact on our national economy than importing substitute products. This is likely the largest development project that involves Great Lakes shipping in the past several decades. More than 100 additional vessels will call on the Port of Toledo each year for this project alone, in addition to the 400-500 vessels that already call upon the port. This project would be huge for any sized port, but for Toledo on the Great Lakes, it certainly will have a profound impact in helping the port grow."

Cappel said reaction from the public has been positive.

"Cleveland-Cliffs has been a great partner. They had several community meetings early on, and we know they will be engaged in improving the area around the plant and throughout the community. The plant will utilize the best technology to minimize impact to the environment."

Even though construction won't be completed until next year, Cleveland-Cliffs will likely begin to receive iron ore this fall to stockpile, so that they can begin making product early in 2020.

"The Soo locks close for winter maintenance annually from mid-January until March, so material needed during that time must be shipped in advance of closure," said Cappel. "There also may be several more project cargo shipments on vessels and barges of large components necessary for construction from various locations."

Brandon Sehlhorst, commissioner of economic and business development of the city of Toledo, said the project helped earn Toledo the title of fifth fastest-growing construction jobs market in the United States, based on data released by the Associated General Contractors of America.

"This project will have a significant impact on numerous aspects of Northwest Ohio's economy, including the utilization of a world-class multi-modal transportation network, highly-skilled workforce and economically competitive utility rates. These are some of our best-selling attributes. It also will complete the transformation of the former Chevron property, in which the Toledo-Lucas County Port Authority and its economic development partners have invested more than $25 million over time to redevelop.

"As a result of the Cleveland-Cliffs project, East Toledo is bustling with activity associated with the construction of the facility, infrastructure improvements and upgrades to the Port of Toledo," said Sehlhorst. "There are thousands of people working on the site on a daily basis. This project has completely transformed the immediate area, which was previously a vacant site being marketed for development.

"Watching the new facility come out of the ground has been exciting for our community. More recently, the excitement has been around the world's largest crawler crane that can be seen from most parts of our fairly flat region. This also gives our community a sense of how tall the new facility will be when it's completed, which will be the tallest structure in Northwest Ohio."

Mammoet's LR13000, known for its load capacity and high flexibility, is among the heavy machinery being used on the project, where activity appears to be non-stop. Based on the most current update provided by the company, 62,000 cu. yds. of concrete has been poured by crews, with more than 7,700 tons of rebar installed. In addition, workers have put in place more than 3,700 tons of steel, with close to 11,000 linear ft. of process pipe installed.

According to Cleveland-Cliffs' website, the selected site at the Port of Toledo is roughly 120 mi. from the company's corporate headquarters in Cleveland, and is a premier location for development. In determining the best location for the new HBI plant, the relative proximity to future customers in the Great Lakes region was a key consideration. The HBI plant will be situated in close proximity to a heavy concentration of electric-arc furnace steel producers.

The Toledo site also has logistical advantages that include an existing dock, rail access, heavy haul roads for construction and operation logistics and availability of natural gas, water and electrical power. Based on its location, the plant will be able to receive iron ore pellets produced in Michigan and Minnesota, similar to how it currently supplies its existing blast furnace customers.

Cleveland-Cliffs has stated that producing steel using HBI requires significantly less energy, and generates lower greenhouse gas emissions compared to traditional processes. The overall life cycle of the HBI plant, and its products, is expected to further improve the energy efficiency and lower the carbon footprint of the domestic steel industry. Natural gas and DR-grade pellets are the only raw materials used in the HBI process. No hazardous or toxic by-products will be generated from the process. Water recycling initiatives will conserve water use and minimize discharges.

Founded in 1847, Cleveland-Cliffs is the largest and oldest independent iron ore mining company in the nation, and is a major supplier of iron ore pellets to the North American steel industry.

Officials of Cleveland Cliffs declined to be interviewed for this story. CEG