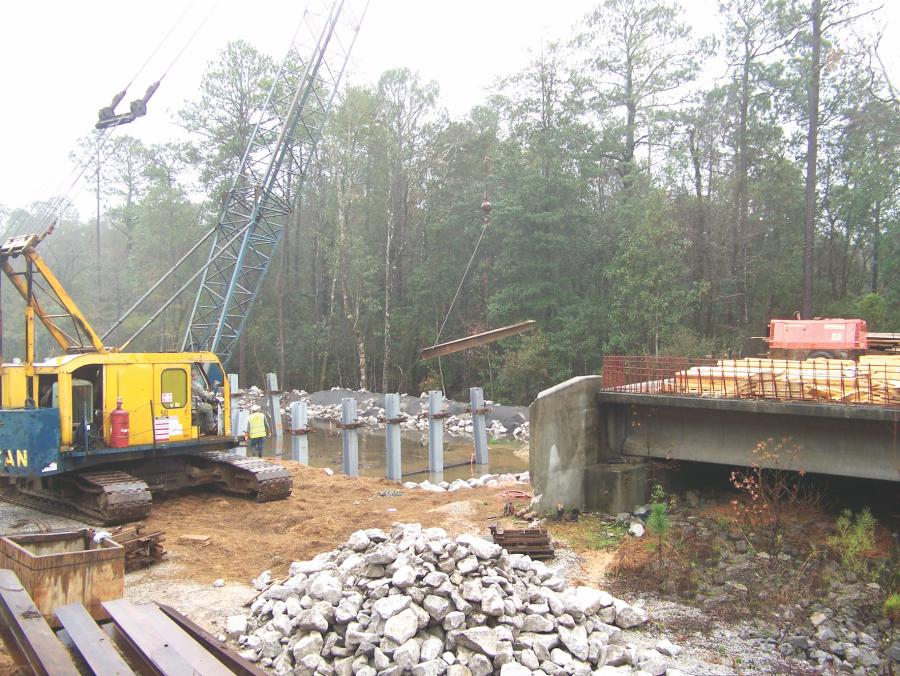 After almost a decade of inactivity, construction of the U.S.-98 and SR-158 extension projects in Mobile County, Ala., has resumed, beginning with work on the Big Creek Bridge. (Volkert photo)

After almost a decade of inactivity, construction of the U.S.-98 and SR-158 extension projects in Mobile County, Ala., has resumed, beginning with work on the Big Creek Bridge. The Alabama Department of Transportation (ALDOT) is overseeing the current effort, which is expected to be completed by fall 2018.

“During construction of the original U.S.-98 project, ALDOT ran into some environmental issues that resulted in the need to include some redesign in the future projects,” said Don Powell, P.E., ALDOT operations engineer, Mobile area. “Some areas where the redesign was needed resulted in additional right-of-way to be purchased. All of that takes time.”

The project scope includes building the foundation and performing the earthwork for four lanes, paving two lanes and creating interchanges. ALDOT will pursue the ultimate divided four-lane design with fully functional freeway type interchanges. as funding is made available. The ongoing bridge extension work, part of a lawsuit settlement, is needed because Big Creek is the major tributary to Big Creek Lake, which is the Mobile drinking water supply. 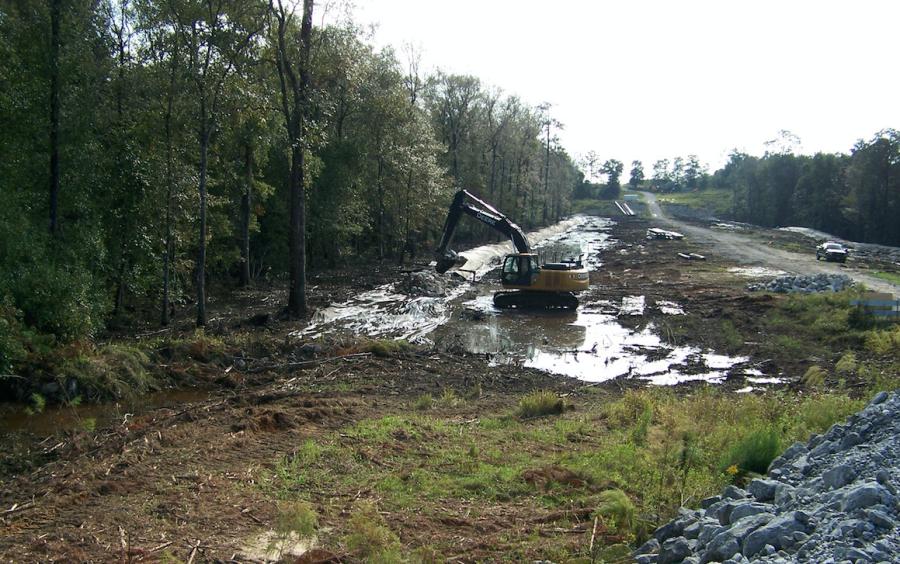 “Extending the bridge within the Big Creek watershed will greatly limit the amount of earthwork required to construct the road,” said Powell. “The bridge extension project was the first project, because it was the one set of plans that were already complete and ready to be let to construction.”

According to Brian Aaron, ALDOT assistant region engineer for the southwest area, “The main reason for the time between projects was a lack of dedicated funding. Thanks to the current BP settlement, the Alabama legislature earmarked approximately $40 million to go specifically to this route. In turn, ALDOT officials agreed to dedicate some additional federal funding to add to this earmark amount. This new BP funding enabled ALDOT to start construction again.”

Like all federally funded projects, ALDOT is required to follow federal and state regulations on the project.

“The largest and most time-consuming is the National Environmental Policy Act (NEPA) process for federal projects, which ensures that projects are addressing all of the environmental issues, and how to minimize the impacts with the proposed project,” said Aaron. “This involves considering different alignments for the project, different wetland impacts, endangered species, etc. The preliminary engineering phase for the new realignment began in 1998, and took about four years to complete the NEPA evaluation. Right-of-way purchasing for the main four-lane highway began in 2003, and still continues today for several interchanges along the route.”

The estimated cost for all seven projects to complete two lanes is $110 million. The funding is a combination of the BP settlement, federal and state dollars. An additional $80 million is needed to complete the remaining two lanes, bridges and interchanges, so that a new four-lane highway could exist from the state line to Schillinger Road.

The work now taking place includes adding an additional 1,400 linear ft. of bridge on U.S.-98 over Big Creek. The structure will be equipped with a runoff containment system and tall barrier rail for water quality and watershed protection purposes. The project was awarded to Tanner Inc. from Laurel, Miss., with Volkert serving as the construction manager.

Future projects to complete the route will be constructed as six separate undertakings. ALDOT officials don't envision the current schedule changing, but acknowledge a lot can happen over the course of five years. Construction will be done in phases, as each separate project is let. Aaron noted it's easier to fund less expensive projects over the course of several years than to support one or two much costlier projects over a two-year period.

“The projects are scheduled over the next several years, such that those that can be completed and open to traffic will function immediately,” said Aaron. “Those that cannot will be completed around the same time to correspond with the completion of the entire route.”

Even though the extension project has been on hold indefinitely, Powell said there haven't been any major issues.

“It's not difficult to resume work on projects that have been dormant for this long. It has actually been easy, because these projects are really needed, and the community is behind the work and is excited that it has begun.

“The biggest challenge for this project would be working in and around wetland areas with the Mobile drinking water watershed. That's why the project was designed to limit land disturbance as much as possible.”

Current work is moving along at a steady pace, with no snags in construction.

“The contractor has driven 75 percent of the piling, and is currently adding inserts to his boom to increase the length, so he can handle the longer piling,” said Joey Fresolone, Volkert project manager.

The first of the concrete bent caps was set to be poured in mid-January, and ALDOT expects to pour two to three a week. Another crew made plans to mobilize in an effort to begin setting girders and placing the sway bracing on the piling.

Work began on the bridge extension project in mid-September 2017. The estimated completion date is December 1, 2018.

“Things are going well,” said Fresolone. “The bridge extension project is on schedule.”

The clearing operations and removal of previously placed fill material have already been completed. The pile driving is ongoing, and are 75 percent complete. The work on the bridge substructure (bent caps) has just recently begun. Weather has already been a factor.

“Hurricane Irma caused delays, due to the extremely heavy evacuation traffic on existing U.S.-98, which delayed the delivery of material and equipment,” said Fresolone. “The current cold weather has slowed the placement of concrete due to temperature requirements having to reach 40 degrees prior to making a pour.”

Key tasks yet to be carried out include the completion of the pile installation and the pouring of 30 bent caps and 1,800 yds. of bridge deck concrete. Crews also must place 8,000 ft. of girders and construct and install the bridge deck containment system.

The condition of the job site prior to work getting underway was wooded and wet. In order to add an additional 1,400 linear ft. of bridge on U.S.-98 over Big Creek, a variety of heavy equipment is required, including large cranes with long boom lengths capable of driving 85-ft. piles with a reach of approximately 75 ft. Competent personnel, cooperative contractors and timely decision making also are considered crucial during the construction process.

Because the bridge will be equipped with a runoff containment system and tall barrier rail for water quality and watershed protection purposes, attention to detail is critical.

“Since Big Creek is the major contributor to the Mobile drinking water supply, the Mobile Area Water and Sewer System (MAWSS) was concerned about possible crashes or spills that could affect Big Creek. The containment system is in place to contain any spills, and the tall barrier rails are in place to keep vehicles on the bridge,” said Fresolone.

The existing bridge is 366-ft. long. The extension is 1,350-ft. long, and together the bridge will span 1716 ft. The bridge extension will consist of 30, in total, 45-ft. simple spans. The sub-structure will consist of 29 pile bents, and two abutments. Each pile bent will be constructed using six 14x73 H-piles that range from 70 to 90 ft. long. The top half of the piling is required to be galvanized to help prevent rust. There are 7,973 ft. of AASHTO Type I girders, with six 43-ft., 9-in. girders being placed per span.

The decks will consist of 45-ft. simple spans, making up four 270-ft. and two 135-ft. continuous decks. All joints will be sealed to ensure all drainage is placed in the bridge drainage containment system. The barrier rail is 3 ft., 9 in., compared to the normal rail of 2 ft. and 8 in. This will help ensure vehicles involved in crashes do not leave the bridge. The bridge ranges from 10 to 24 ft. in height.

Currently, there are 15 employees working for the contractor, with four Volkert employees inspecting the progress. Crews typically work 10 to 11 hour work days. As for the schedule, the contract has used 21 percent of the 240 days, with 26 percent of the work being completed, to date.

Approximately 3,500 cu. yds. of material has been removed during construction. The material was placed on the previous project, to bring the area under the proposed bridge extension back to its natural state.

Numerous safety precautions have been taken during construction, with the contractor providing effective working platforms with fall protection for employees and the inspector. Because the project is new alignment, there will be no impact on traffic.

As for the most delicate part of the bridge extension project, Fresolone said the bridge super structure and bridge drainage system will take a great deal of time.

“The bridge decks will require all of the drainage system pipe hangers and drains to be placed and secured prior to concrete being poured. The plans are very detailed, with very little tolerance of error,” said Fresolone.

As part of its commitment to keep the public more involved and better informed, ALDOT created a community outreach group for the U.S.-98 project. Private citizens volunteered to work with officials to ensure that the project was headed in the right direction. Participants provide feedback to plans, offer alternatives, ask questions and keep the community updated. The group was recommended by an independent panel that included members from Mobile County Government, Fish and Wildlife and the Chamber of Commerce.

For Powell and the other team members involved, resuming work on the languishing project is extremely significant. Powell is looking forward to the continued progress.

“It's something ALDOT has been working on now for two decades. The route is very important in relation to tourism travel, freight travel in and through the state, as well as, and more important, making the U.S.-98 route safer for the traveling public and community. It is very rewarding to see these projects finally moving forward, and getting the funding boost it needed to keep it advancing.”