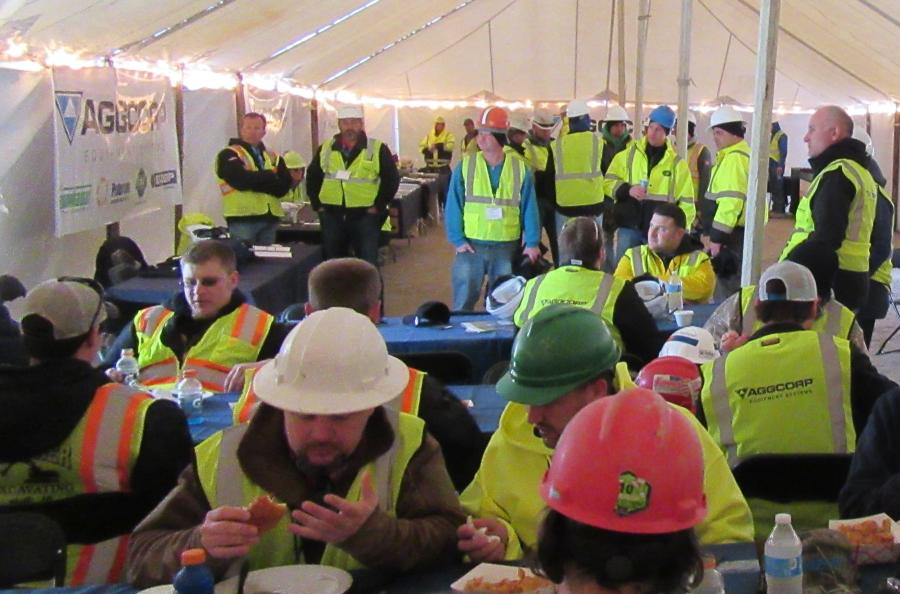 A tent was set up at the quarry where attendees could come in to warm up and enjoy a catered lunch.

Established by Sean McIvor in 2008, the company recently expanded its territory into Michigan, becoming the authorized Powerscreen, MDS Trommels, Terex MPS, Cedarapids, Edge Innovate, EvoQuip compact crushing & screening equipment, Neuenhauser Star Screens and Telestack bulk handling equipment dealer for both Ohio and Michigan. The demonstration site was chosen in part due to its central location for clients in both Michigan and Ohio. A full contingent of AGGCORP Equipment Systems personnel was joined by manufacturer representatives from several of the dealership's equipment lines, many traveling from as far as Ireland to participate in the event.

The demonstration ran from 10:00 a.m. to 4:00 p.m. with approximately 250 people attending from Ohio and Michigan throughout the course of the day. A total of 22 machines, including jaws, cones and screeners were brought in and set up at the quarry for live demonstrations. The setup gave attendees an opportunity to see the equipment in full production mode and also time for an up close look accompanied by AGGCORP and manufacturer representatives to answer questions and discuss applications when the equipment wasn't in operation.

While Powerscreen equipment took center stage at the event, several of the dealership's other equipment lines also were well represented. An MDS M515 rip rap tracked trommel, capable of processing 300 to 500 tons of material per hour, attracted a great deal of attention. MDS International's owner, Liam Murray, was on hand to help oversee the demonstration and meet with AGGCORP's customers to discuss the machine's features and capabilities.

For the presentation, the MDS M515 tracked trommel was paired up with Powerscreen's Warrior 600, a recently introduced multi-purpose, heavy-duty incline two-deck screen.

Among other Powerscreen machines in operation at the site were the Powerscreen Trakpactor 320, a mid-sized horizontal impact crusher feeding and a Powerscreen Chieftain 1700, a mid-sized track mobile screen built for applications requiring high volumes of finished products such as topsoil, coal, crushed stone, recycling materials, iron ore, sand and gravel.

For many attending the demonstration, the event was not only a great place to see and learn about AGGCORP's equipment lines, it also was an excellent networking opportunity. With plans to become more involved with recycling, Wayne Meadows of Wayne's Country Market expressed sentiments that were shared by many in attendance, “It's not very often that you can see this many machines in one place and meet people with the level of knowledge that I've encountered here.”

“There's really an amazing range of equipment here, this is quite a setup.”

Andy Kirby of Kirby Sand & Gravel in Upper Sandusky appreciated the opportunity to see the equipment in action.

The dealership is a full line stocking dealership representing Powerscreen, Terex EvoQuip, Terex MPS, EDGE Innovate, MDS, Neuenhauser, Peterson Pacific and Telestack equipment. Owned and managed by Sean McIvor, the company offers sales, service and rentals in Michigan and Ohio and employs four sales representatives, three service technicians and three office personnel. Located at 22800 Lakeland Boulevard, in Cleveland, Ohio, the headquarters location is housed in a 65,000 sq. ft. facility with 14 cranes with up to 50-ton (45 t) capacity and a plasma cutter with eight torches. The dealership has Kenworth Crane Trucks available for onsite service and a second location in St. Johns, Michigan.

McIvor was extremely pleased with the event and wanted to extend a special thank you to Cardinal Aggregates, who hosted the event, as well as his employees and the customers who braved the weather to attend. He added that seven machines were sold as a result of the event.—CEG