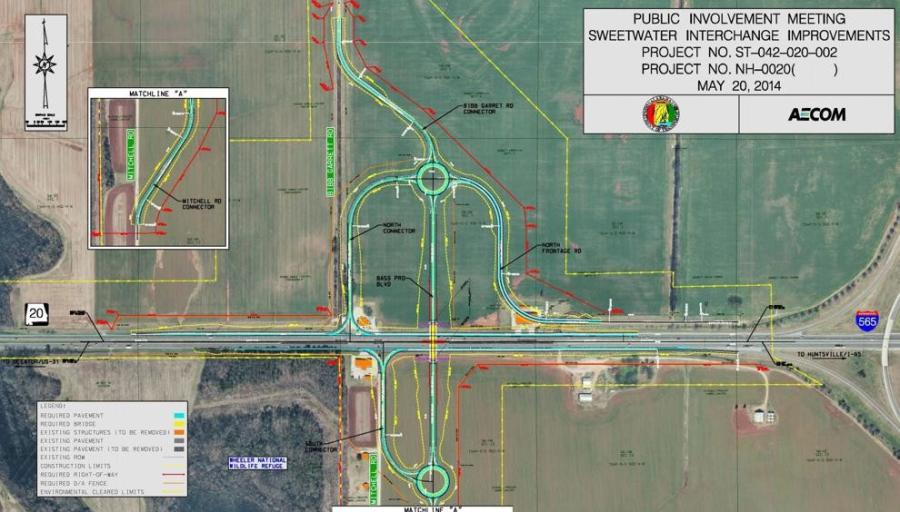 Decatur has been awarded a $14.2 million federal grant for construction of an overpass on Alabama 20 at Bibb Garrett Road, where a now-abandoned Bass Pro-anchored development called Sweetwater once was planned. The overpass was part of the Sweetwater proposal. (Alabama Department of Transportation illustration)

The contractor, Rogers Group, working from its Alabama base in operations in Tuscumbia, was contracted to start the project. The effort is primarily funded by a $14.2 million BUILD grant from the U.S. Department of Transportation, along with Decatur city funds.

The roughly 300-ft. overpass will stretch north-south over Alabama 20 near Interstates 65 and 565. Apple Lane Farms and the former RaceTrac and Chevron gas stations will be demolished for the project. All three are already closed.

"We probably won't see much action in the first few weeks," said Decatur City Engineer Carl Prewitt. "The builder will be putting up construction signs and traffic controls. The utility relocation will begin in a month or so."

Mayor Tab Bowling said this could be a defining moment for Decatur.

The overpass is in an area made up of thousands of acres of farmland, 3,200 acres of which were annexed into Decatur in the 1980s in a controversial reach into another county. The area is considered prime for economic development due to its location near the two interstate highways, each providing quick access northeast to Madison and Huntsville.

"I'm confident you'll see development take place when the overpass starts taking shape," Bowling said. "This could be the start of what will become New Decatur."

City Council President Jacob Ladner called the area a "whole blank slate of Decatur that's waiting to be developed." He said the overpass is a huge opportunity that the city can't miss.

"It's got massive potential because it can be seen from Interstate 65," Ladner said.

Bowling said there are developers interested in the Alabama 20 properties, particularly the 500 acres in the southern corner of the intersection of Alabama 20 and I-65 owned by the Mitchell-Frazier Farms Limited Partnership

Sam Frazier, the property's trustee, has an agreement with the city that the city will pay $574,000 for 11 acres of the partnership's land to use as a right of way.

"We'll see mixed-use development, with a combination of retail-commercial and residential," Bowling predicted. "On the northern side near the Norfolk-Southern railroad, we expect to see some light manufacturing."

As much as city officials believe the overpass could kick-start economic development, Prewitt insisted it's primarily needed for safety in an area that's had several serious wrecks and fatalities.

"There are lots of heavy trucks out there, and that creates accidents," he said.

He said the trucks use Bibb-Garrett Road and, when they turn left onto Alabama 20, they often must "hide in the median crossing to complete the turn before a car runs into them."

The overpass design features roundabouts that are unusual in Alabama and includes ramps, a new access road, improved highway lighting, and accommodations for safe pedestrian access.

Decatur Utilities (DU) is making $482,788 in improvements as part of the relocation of water and sewer mains for the overpass. The company plans to replace 4,500 ft. of 6-in. water mains with 12- and 16-in. pipes. DU is also adding an 83-ft. extension to the gravity sewer main for future expansion and growth.