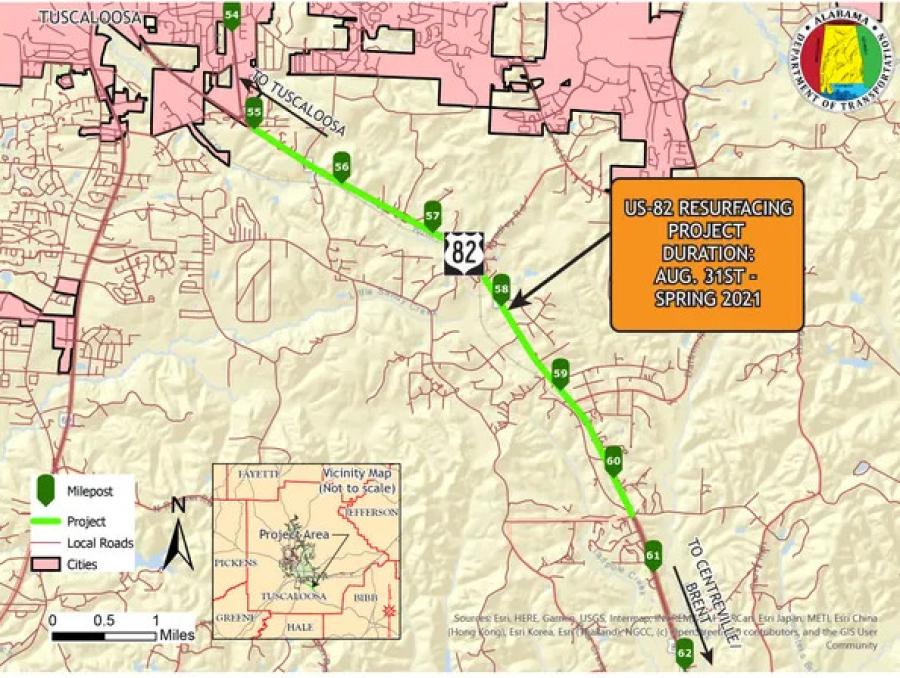 Work has begun on a project to resurface a 5.34 mi. stretch of U.S. Highway 82 in Tuscaloosa County between Greenwood Circle and Duncanville Middle School Road. (ALDOT photo)

The Alabama Department of Transportation (ALDOT) has begun the first of a pair of road improvement projects this year on U.S. Highway 82 in Tuscaloosa County.

Work got under way Aug. 31 to resurface a 5.34-mi. stretch of U.S. 82 on the city of Tuscaloosa's south side between Greenwood Circle and Duncanville Middle School Road.

The goal of the $5.97 million project, an ALDOT spokesman said, is to improve mobility and safety.

Tuscaloosa's S.T. Bunn Construction Co. Inc. is the contractor for the highway improvement, which is expected to continue until spring 2021.

Morning motorists are being warned of delays as the road resurfacing continues. The contractor is not allowed to block lanes before 9 a.m. so as to reduce the travel impact on school and work traffic, said ALDOT spokesman John D. McWilliams.

North of town, a larger project on U.S. 82, known locally as McFarland Boulevard, will not begin construction until later in the fall, at the earliest, according to ALDOT.

First announced in April 2019, proceeds from the new Alabama state gas tax increase will go toward an estimated $35 million expansion of McFarland Boulevard.

The project began with ALDOT purchasing about $750,000 worth of rights-of-way for the expansion of U.S 82 between Alabama State Route 69 and Rice Mine Road.

This stretch of U.S. 82 accommodates about 50,000 vehicles per day and crosses into both Tuscaloosa and Northport. The road improvements are expected to include an additional travel lane in each direction, turn lanes where needed and an overall vehicle access management upgrade of the roadway.

ALDOT said that, when complete, this part of McFarland Boulevard will resemble the roadway improvements that have been added to nearby U.S. 43 North between U.S. 82 and SR 69 North.

"This has been on the shelf for several years, but we couldn't get to it for lack of funding," McWilliams said in 2019. "This is now something we want to move forward with."

The larger McFarland Boulevard work was on the original slate of projects included in the "Transforming Tuscaloosa" sales tax reformation legislation adopted by the Alabama Legislature in 2015. This law overhauled the county's sales tax structure to make permanent the one-cent temporary sales tax for schools and combine it with the existing countywide two-cent sales tax.

But the law also required that a number of these projects — including those like the McFarland Boulevard expansion project — be completed before any proceeds from the new tax structure could be directed to other highway projects.

The Rebuild Alabama Act that was signed into law last year and started at six cents in September 2019 will gradually increase the state's fuel tax to 10 cents per gallon over the next three years. By that time, governments in Tuscaloosa County are expected to receive an additional $2.28 million dollars in gas tax revenue for various transportation infrastructure projects.