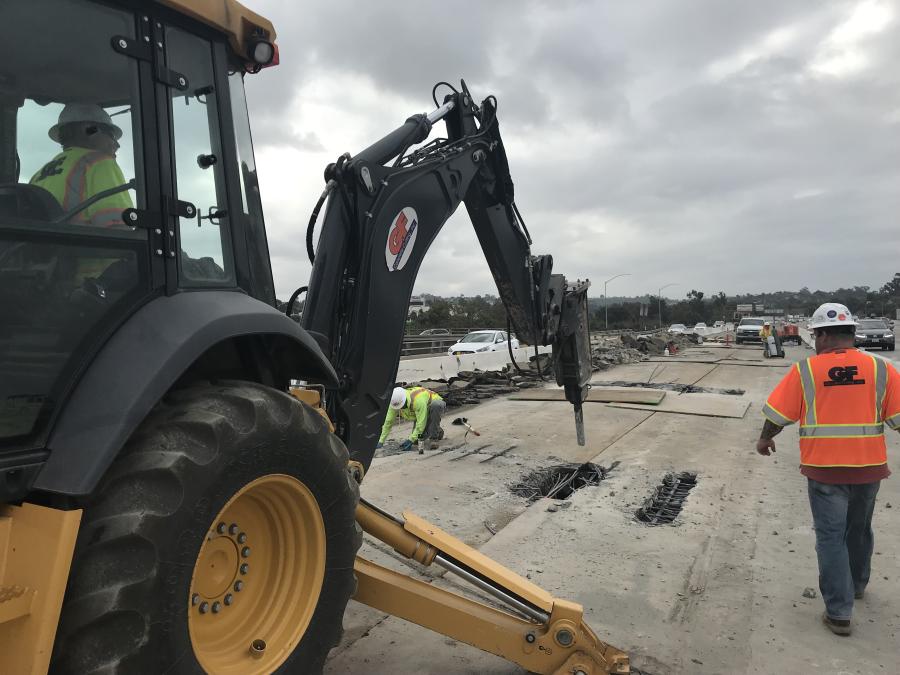 A John Deere 710 backhoe with a hydraulic breaker is demolishing a section of a concrete bridge deck as part of the $25.7 million project in Chula Vista, Calif.

Steady progress is the byword for the ongoing upgrade and rehabilitation of the Sweetwater River Bridge in Chula Vista, a $25.7 million project (total cost) along the I-805 in the South Bay area of San Diego County that is a joint-project between the California Department of Transportation and the San Diego Association of Governments (SANDAG).

The bridge and safety improvements are part of the I-805 South Express Lanes Projects, which cover more than 11 mi. between East Palomar Street in Chula Vista and the I-805/SR 15 interchange.

Flatiron West Inc. was awarded a $17 million construction contract to upgrade the 534-ft.-long bridge (five lanes in each direction, including an HOV lane) between Bonita Road in Chula Vista and SR 54 in National City.

Work began in March 2019 and is scheduled to be delivered in February 2022, but due to the fast-paced progress, Flatiron West is looking at a fall 2021 delivery date.

The bridge, built in 1975, is being widened to have 10-ft. shoulders on either side, which improves safety. Other elements include maintenance for columns, decks and approach slabs; improvements for the northbound connector onto westbound SR 54; and the installation of a new concrete barrier for the full length of the bridge to separate the traffic.

The original design plans called for two consecutive stages in terms of construction, but Flatiron determined that both sections could be dealt with simultaneously.

"This is helping to save overall construction time," said Caltrans' Manuel Rivas, construction engineer. "Flatiron is doing all it can to finish the project in the fall of 2021." 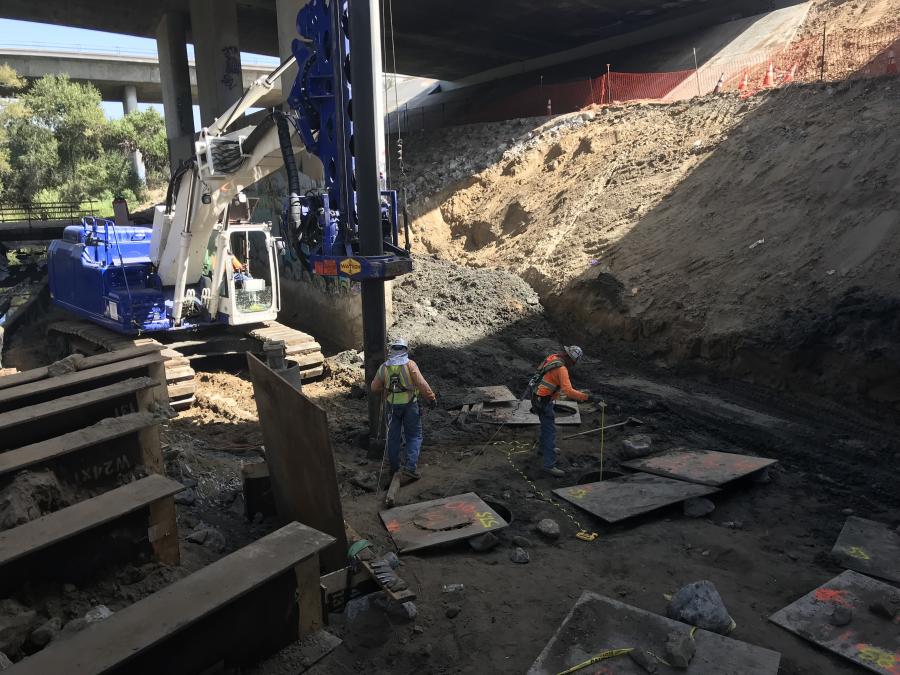 Fifty-plus wooden piles were driven by the end of last year for the bridge support system.

"They went down 100 feet for the permanent construction and 50 cast-in-steel piles [CISS] were drilled," said Rivas.

This process had the casings placed, which were then filled with concrete.

All the column and foundation work was completed in 2020.

"Even though the two sections are being built concurrently, we're about to go into stage 2 as far as traffic handling," said Rivas. "In the next two to three weeks, we will be shifting traffic easterly on the northbound direction. This project is mainly about the bridge, but we are also reconfiguring the approach gore area going northbound so that we can match the new features on the improved bridge."

A Manitowoc 200-ton crane was vital for the work on the foundations and columns in the middle section of the bridge, according to Rivas.

"The tall crane was very visible from the freeway as it dragged piles and lowered down the steel cages," said Rivas. "However, it did not create any impacts to the public traffic."

Demolition and excavation operations generated about 9,000 cu. yds. of material, with some of these materials recycled on other projects and others sent to recycling centers. 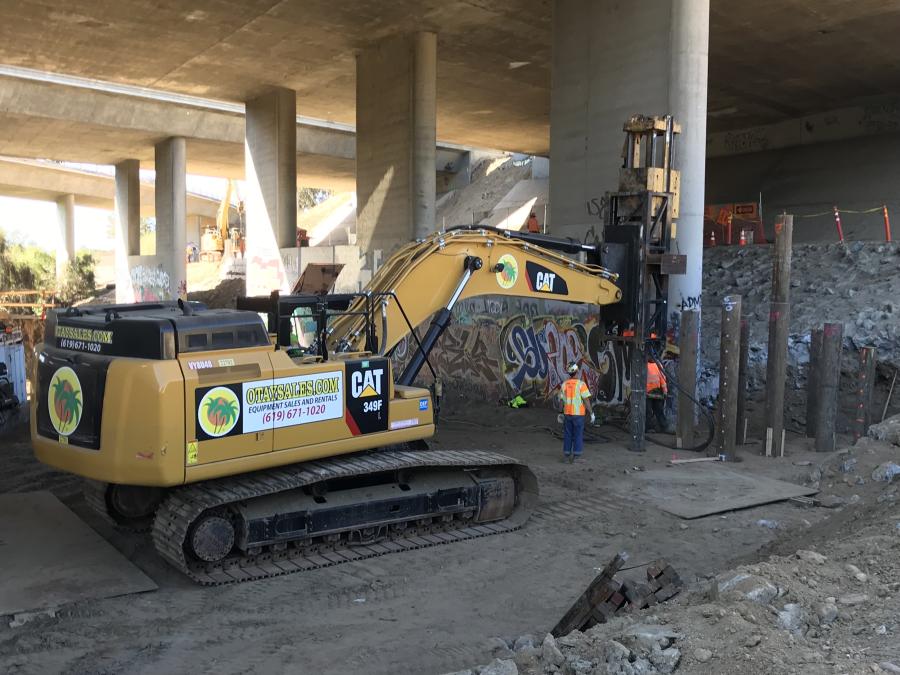 Flatiron West is utilizing a mixture of owned and rented equipment, including: a Link-Belt 75 RT hydraulic crane; a Cat 349F excavator with a hydraulic impact hammer for low profile pile driving; a Cat D6 swamp dozer for water logged areas, loaders, backhoes; and other standard equipment.

"It was normal pile driving wear and tear, but we pretty much had a mechanic on-site daily, making small corrections and just being there to keep things in tip-top shape," said Joe Fontana, Flatiron West's project manager, who stressed the importance of routine maintenance and daily inspections to minimize equipment down time.

"The bridge is in fairly good condition for being 45 years old," said Rivas. "The improvements are in line with Caltrans' mission to provide a safe, sustainable, integrated and efficient transportation system to enhance California's economy and livability, as are many of the corridor improvements. On the northbound side of the bridge, between the main lanes and connector, there was just a raised median island that was not up to current standards. The new shoulders and concrete barrier will give drivers more security. Bridge shoulder widening in the median will eliminate the feeling of being confined by a barrier coming close to divers and will allow a place to pull out in an emergency."

These improvements have been in the planning for many years and are welcomed by motorists.

The bridge and road infrastructure upgrade were designed by Caltrans.

"The grading between the main lanes and the ramp on the northbound side did not allow for the construction of the barrier as was required," said Rivas, "so per-design, we had to remove a 20 foot wide section of the existing bridge and reconstruct it to a proper grade so we could have the concrete barrier on top. To maintain the stability of the existing bridge, per-design, we had to install a temporary support system. This removal and working within the river footprint have been challenging." 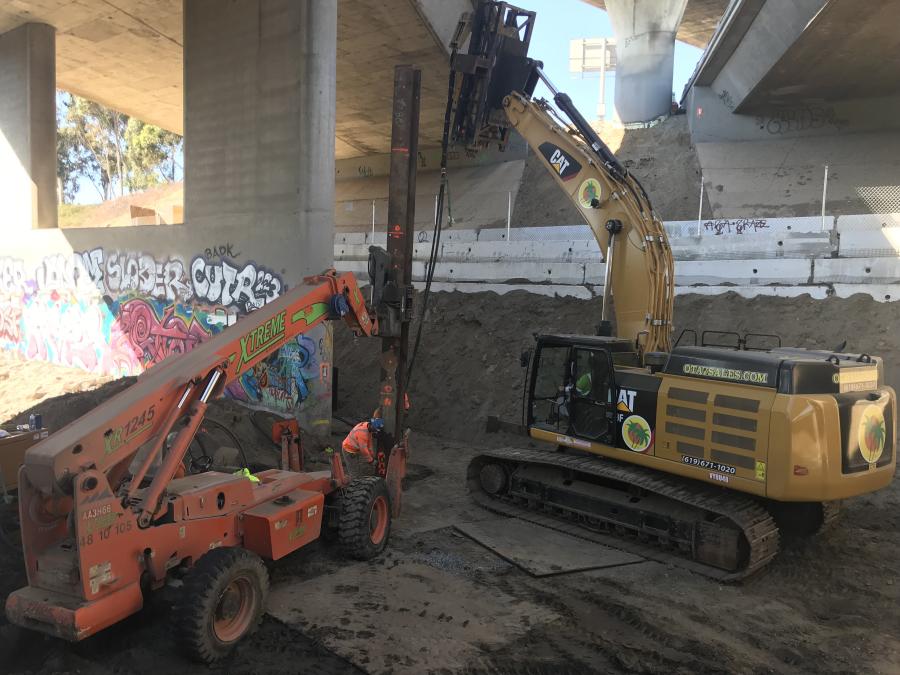 The current upgrade is expected to extend the lifespan of the bridge by 20 to 30 years. Future work on the bridge will include an overlay of the deck.

The traffic management plan is utilizing lane closures and detours as the work progresses. The COVID-19 outbreak, as has been the case for many projects across the country, has reduced traffic volumes and provided opportunities for crews to accelerate work on the bridge.

"We re-striped the lanes and made them narrower, so we did not have to reduce the number of lanes during construction," said Rivas. "To further enhance work zone safety, the maximum speed limit was reduced to 55 mph. This slows down the traffic in the area and helps the travelling public and the workers as well. Quite a bit of the work has been done at night under the lane closures and detours, and we have not had any issues."

As Caltrans stressed on the project web page, "Safety is a top priority for Caltrans and every precaution is being taken to ensure the protection of both workers and motorists during construction."

The DOT is providing regular updates on construction hours, closures and detours through signage, notices and the project web page, as well as through a construction hotline.

Construction-wise, the bridge has been divided into two sections: right and middle.

"On the right bridge, work on the main structure has been done and all we have left to do is the closure to tie it back in," said Rivas. "On the middle bridge, the soffits and stems have been completed. There is deck work to complete."

Activities for the next 12 months will focus on finishing the construction of the median bridge widening and all concrete barriers.

"Extended closures have helped Flatiron finish the work faster," said Rivas. "Now we're going into another challenging part of the project, which is to replace all of the approach slabs in both sections. Because of the traffic and the amount of work, Flatiron will bring in multiple crews to complete this work with as few closures as possible." 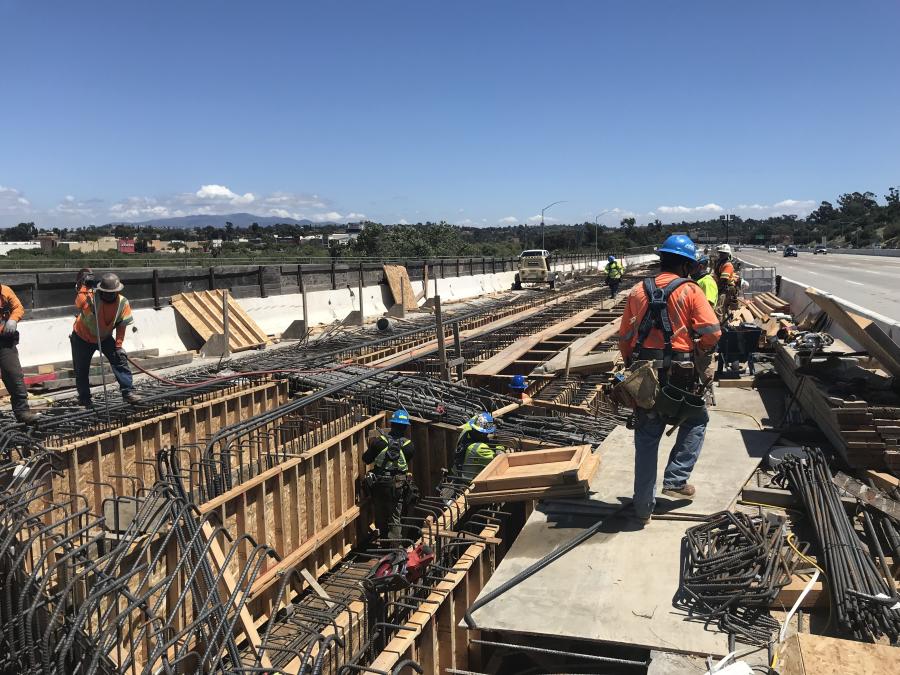 The bridge is located over the Sweetwater River, which made access a challenge for the construction of new columns and foundations, and for the maintenance work of existing structure.

"We had to build diversion channels for the river and that created challenges related to water control and environmental requirements, and erosion control," said Rivas. "During the winter we had a pretty wet season and the crews had to work hard on keeping the sediment and other materials in place to avoid damages to the river. Having to work in the middle of the river brought challenges in designing the falsework. Flatiron came up with the idea to build triangle supports that are supported on the concrete foundations of the bridge piers. This allowed for the falsework to be placed without having to drill more piles into the riverbed."

Relations between Caltrans and Flatiron West are solid and as noted, collaboration is crucial to the production.

"Both parties are committed to partnering and have been utilizing structured partnering," said Rivas. "We have not had to bring any issues to the Dispute Review Board [DRB]. Continuous and open communications have been key to the project's success and this is why we're ahead of schedule."

"Caltrans and Flatiron have been proactive in bringing issues up," said Rivas. "Coming up with efficient solutions has been a team effort."

"We're all diversified and highly motivated to deliver the project," said Fontana. "The crews show up daily and really give 100 percent every day. The commitment to safety and producing high quality work is high — they're really professional."

"Improvements to I-805 will help accommodate the projected population and employment growth in the region by connecting employment and activity centers including offices, retail stores, recreational facilities, communities and schools," stated the Caltrans web page. "[They] also will help maintain and grow the region's economy, through the enhanced movement of goods and services along a main transportation artery for the region. The project corridor links San Diego to the Otay Mesa Port of Entry, as well as Orange, Riverside and Los Angeles counties. It is critical for both international and interregional shipping. The Otay Mesa Port of Entry accommodates 94 percent of commercial truck traffic in the region and handles more than $42.5 billion in goods each year."