All Hands On Deck for Fort Eustis Bridge Job 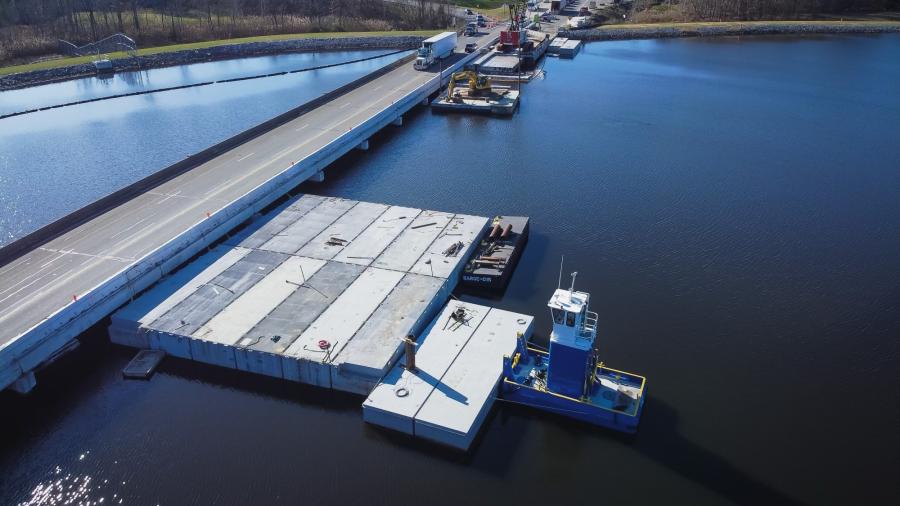 This aerial shows the eastbound lane of Route 105, which is accommodating both eastbound and westbound traffic to facilitate the demolition and construction of the new westbound lane. The Manitowac 4100 will drive onto the barge. The 4100 will be used to drive 24-in. piles at the bents, set bent caps and set concrete girders.

The Virginia Department of Transportation (VDOT) is heading up a bridge replacement in a sensitive and highly trafficked area of Newport News, Va.

The contract was awarded to i+iconSOUTHEAST.

Construction on the $17.8 million project began in spring 2020 and is expected to be complete by fall of 2022.

"This project consists of the reconstruction of this 0.56-mile segment of VA Route 105 and two access ramps to U.S. Route 60 including the full removal and replacement of the Fort Eustis Bridge with a wider cross section," said Katie Spear, vice president of marketing of i+iconSOUTHEAST.

She said the Fort Eustis Bridge, built in 1960, is a part of a heavily trafficked road that leads directly onto the Fort Eustis Army Base and is one of only two access roads on and off the base. 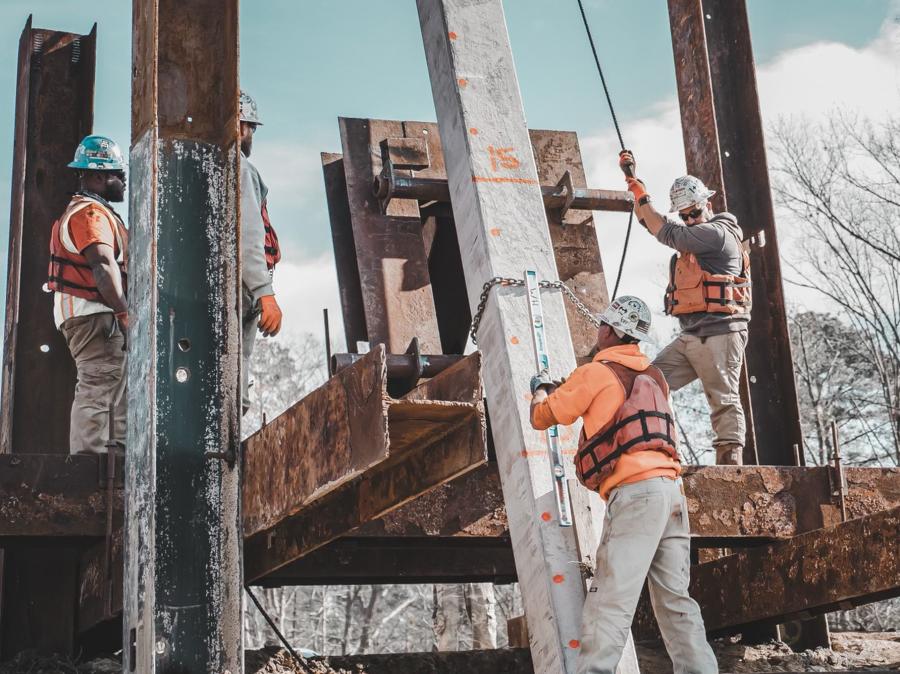 "For years, the bridge has experienced deterioration under the bridge as well as on top that is leading the joint effort between VDOT, EFL (Eastern Federal Lands) and the city of Newport News to address the concerns," she said. "The bridge crosses Newport News's city reservoir and is a highly sensitive area, as such the new bridge will also help redirect pollution from entering the city reservoir."

The work includes raising the grade of the bridge surface and roadway, replacing precast concrete piles, utility relocation, and other miscellaneous work. The deck will be supported by prestressed concrete beams.

The construction of the new bridge will be done in stages so that the existing bridge can remain open during the replacement. The bridge can be accessed by U.S. Route 60 (Warwick Blvd) on the west, and by I-64 on the east.

As of mid-December, the i+iconSOUTHEAST team had established and cleared approximately two acres to accommodate the laydown area and access to the water.

"Barges have been assembled and set in the water," Spear said. "The elevated work platform (trestle) is nearing completion, which will allow the Manitowoc 4100 crane to walk from land onto the barges that are currently in the water. The crane is being used to float and drive piles at the bents; a Pileco D46 diesel hammer is driving the piles; and a Conmaco MDL 24 pile cutter is being used to cut the existing 24-inch piles at the bents."

i+iconSOUTHEAST employees have already demoed 10 spans and abutment B on the eastern side.

"The biggest challenge to date is the sensitive work area and highly trafficked area close to the base," Spear said. "The city reservoir is held back by a dam, which requires a special cofferdam for the construction of abutment A. This cofferdam will be left in place and cut off at the mudline once construction of Abutment A is complete."

Spear reported that the dam is a sensitive area with multiple stakeholders.

"Coordination between all parties has been challenging to get approvals to install the cofferdam and construct abutment A," she said. CEG