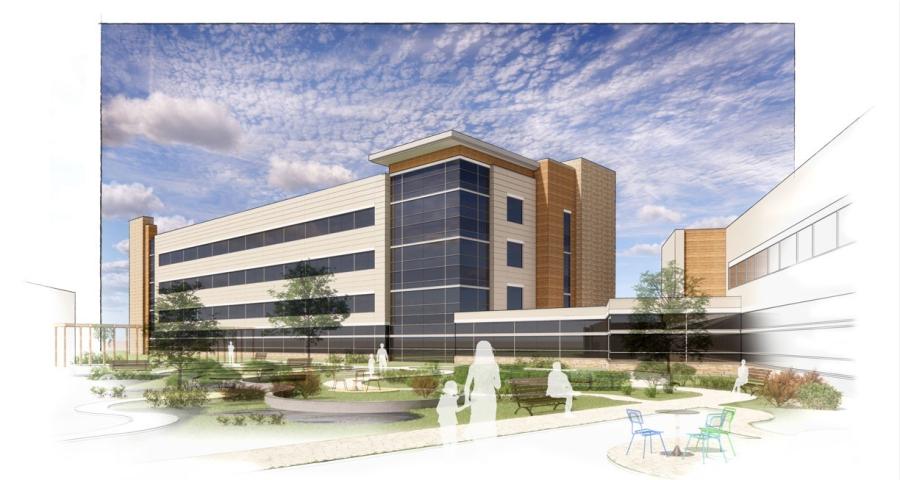 
Before the Hecktown Oaks hospital in Lower Nazareth Township, Pa., was even finished, the Lehigh Valley Health Network (LVHN) took a fresh look and decided it wasn't quite big enough.

The health care network announced Oct. 29 it will add a four-story bed tower to the hospital currently under construction on Hecktown Road near PA Route 33.

"Having the additional hospital space also provides capacity to meet health care needs of Northampton County residents," he explained in a news release.

The 95,000-sq.-ft. addition will include 30 patient beds and a helipad, although a helicopter will not be based at the site. Three of the floors in the tower are available for future growth, as well.

The larger Hecktown Oaks hospital will be 201,000 sq. ft. in size, a total that includes the addition, said Brian Downs, a spokesman of LVHN. The initial phase of the hospital includes approximately 20 beds, he added, plus the 35,000-sq.-ft. Lehigh Valley Cancer Institute, a 61,000-sq.-ft. medical office building and an emergency room with an area dedicated to treating children.

Modern infection control and patient safety protocols in response to COVID-19 also are being built into the overall campus at LVH–Hecktown Oaks. Some of the safety measures include HEPA filters and UV lights within the rooftop HVAC system to control and eliminate bacteria, as well as bacteria–resistant flooring, hand–sanitizing stations and Plexiglas dividers at the registration area.

"We're taking extraordinary care at LVH–Hecktown Oaks to install the most advanced infection control technology as a commitment to patient safety," said Begliomini.

Plans call for the main hospital to open for patients next summer, while the addition should be ready by the fall of 2021.

Begliomini also wants the new hospital to bring LVHN care closer to many Northampton County residents. In fiscal year 2019, the health network said, more than 1,700 of its patients would have been able to receive care closer to home at LVH–Hecktown Oaks, compared to the network's eight other hospitals.

The LVHN includes three hospital campuses in Allentown, one in Bethlehem, one in East Stroudsburg, one in Hazleton and two in Pottsville — all in eastern Pennsylvania.

In addition, LVHN announced Oct. 20 that construction on a new hospital in Dickson City has resumed. Coordinated Health, a leader in orthopedic care, began the 100,578-sq.-ft. hospital project by breaking ground in January 2019, prior to joining LVHN last December. The LVHN Board of Trustees approved the hospital plans in September.