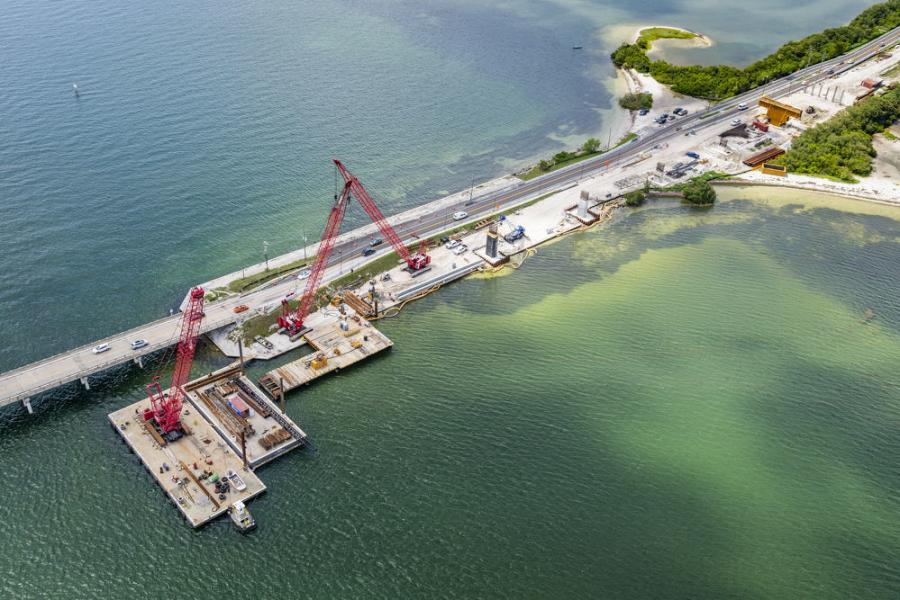 The construction site for the Florida Department of Transportation’s $56.3 million project to replace the SR 679/Bayway Bridge is a hive of activity with crews and equipment from American Bridge Company.

The construction site for the Florida Department of Transportation's $56.3 million project to replace the SR 679/Bayway Bridge (Structure E) and repave SR 679 from north of Yacht Club Lane to SR 682 is a hive of activity with crews and equipment from American Bridge Company (ABC) hard at work to complete the project in the summer of 2021.

The work, which started in December 2018, is taking place along 2 mi. of SR 679 and Pinellas Bayway (north of Yacht Club lane to SR 682) in the cities of St. Pete Beach and St. Petersburg (Pinellas County). The project is being financed by toll revenue. 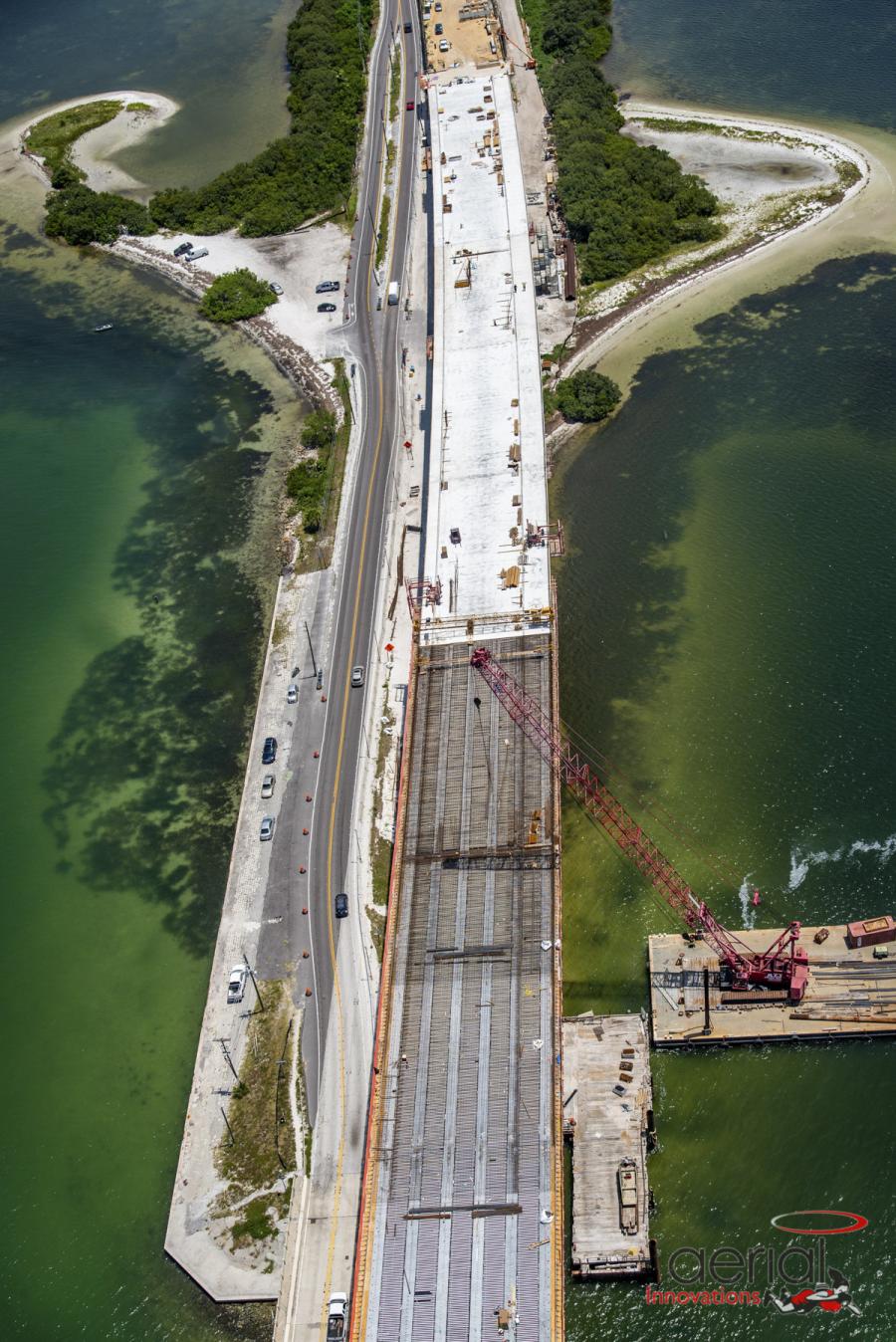 The design-build project includes replacing the existing two-lane bascule bridge, a drawbridge, with a two-lane, high-level, fixed bridge (Bayway Structure "E") between Isla Del Sol and Tierra Verde islands in the Intercoastal Waterway, repaving the existing SR 679 roadway between SR 682 and the new bridge, and replacing a seawall south of the bridge along SR 679 in Pinellas County. Also included is the construction of a 12-ft.-wide shared-use path on the east side and a 5-ft.-wide concrete sidewalk on the west side of SR 679, and a round-about at Madonna Boulevard/First Street.

Originally split into three contracts, it was decided to combine it into one.

The existing bridge, which carries 15,600 cars and trucks daily, was built in 1961 and will remain in use until the new bridge is completed.

"The costs of operating the bridge are increasing, with an annual cost close to $350,000," said Jonathan Yates, ABC's project manager. "You have to pay the operators 24 hours a day and pay for the replacement parts and repairs. The longer the bridge operates, the more issues you will have and more wear and tear."

The new bridge, designed by American Consulting Engineers of Florida LCC, will have an expected lifespan of 75 years.

"The largest challenges are designing the bridge over the inter-coastal waterway while considering the environmental impacts to local residents, motorists, fishermen and cyclists, and building so close to the existing bridge," said Yates. "There also is the issue of tying in the bridge from the roundabout and the Madonna Boulevard and SR 679 Interchange with the grade, while maintaining the 65-foot clearance over the channel. We also have to maintain the esthetic appeal of the bridge — with the large hammerhead.

"The bridge's biggest design advantage is that it is a high-level fixed span and there won't be any more waits for motorists and mariners," he added. "There also will be better pedestrian and cycling access — there are a lot of bikers in the Tierra Verde and Fort Desoto area."

To maximize the structure's lifespan, a glass fiber reinforced polymer (GFRP) rebar is being used in the seawalls. 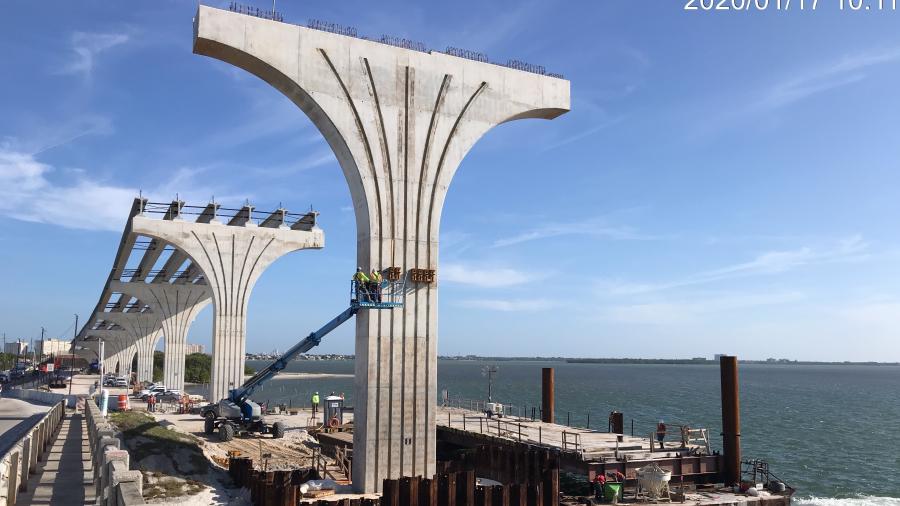 "It doesn't corrode and the seawall caps will be very serviceable and shouldn't have any issues with corrosion or spalling," said Yates. "We're using high-capacity piles throughout the main channel to reduce the footprint, which improved the driving of foundations — reducing the amount of pile — and that had a trickle-down effect throughout the substructure. The footings can get smaller and you're taking up less area for mariners in the channel."

The design also helped with allocation of equipment for various phases of the construction, which optimized the longer span lengths and reduced the size of the substructure element.

The bridge, which provides scenic views of the Tierra Verde area, passes through a residential district and the construction team hosts monthly community outreach events the first Tuesday of each month where team members explain the current and upcoming construction activities and answer questions related to the project.

"We've received a lot of positive feedback and the meetings have kind of eliminated the rumor mill and responded to a lot of questions," said Yates.

So far American Bridge has completed 15 of 18 piers and built five of 17 decks (153 ft. each, 765 ft. so far), with deck pouring operations that started last March.

Piers 2 to 17 are columns on piles and 1 and 18 are on end bents — piles and mechanically stabilized earth MSE walls.

"We're targeting the completion of the substructure in early summer and opening the bridge by late fall," said Yates. "The constricted work zone is probably the biggest challenge — a lot of the roads that we're building are 10 feet from the existing roadway and bridge, so we've got a lot of precautions and controls in place to protect users and construction workers. There's been a few utility relocations and we worked closely with the utility owners to get them moved without major impacts to the project." 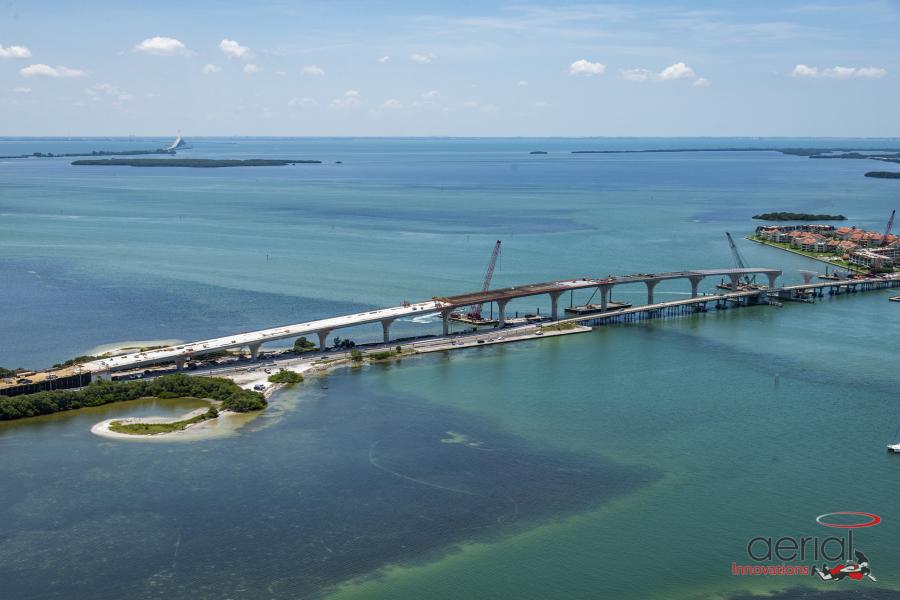 ABC has a solid environmental record and is working with Faller Davis, the environmental consultant of FDOT, FDOT itself and the design team to come with controls and means and methods.

"We're good stewards," said Yates. "The effort we put in early on and throughout the work has helped maintain our great environmental record. There are manatees in the area and if we see one – we have a designated manatee spotter — we have to stop work while it passes. We see all sorts of wildlife — dolphins and many species of birds. We're able to mitigate a lot of the temporary impacts. The trestle installation has been a great benefit for FDOT — they won't have to do any mitigation related to the temporary construction."

Some hard layers were encountered below the sea-bed for three or four of the piers that the tips of the piles had to pass through.

"There were some hard driving conditions, but generally we got through the difficulties and our foundations have been successful overall," said Yates, who pointed out that relations with FDOT are "really good. My FDOT counterpart is Jonathan Gill, and when we have issues, we work together to solve them. We also have a lot of quickly changing weather conditions and we're coordinating with day-to-day marine traffic and the Coast Guard. We've got beams that weight roughly 200,000 pounds. These create some big engineering challenges.

"We designed a precast steel slab with our water-tight footings to allow us to build them underwater," added Yates. "We precast the slabs, grout them in around the pile, and pump out the seawater for the formwork and fill the footer that may be four or five feet underwater."

The 2,583-ft.-long bridge has 18 piers, each of which requires about 2.3 million lbs. of concrete and takes nearly a month to construct. 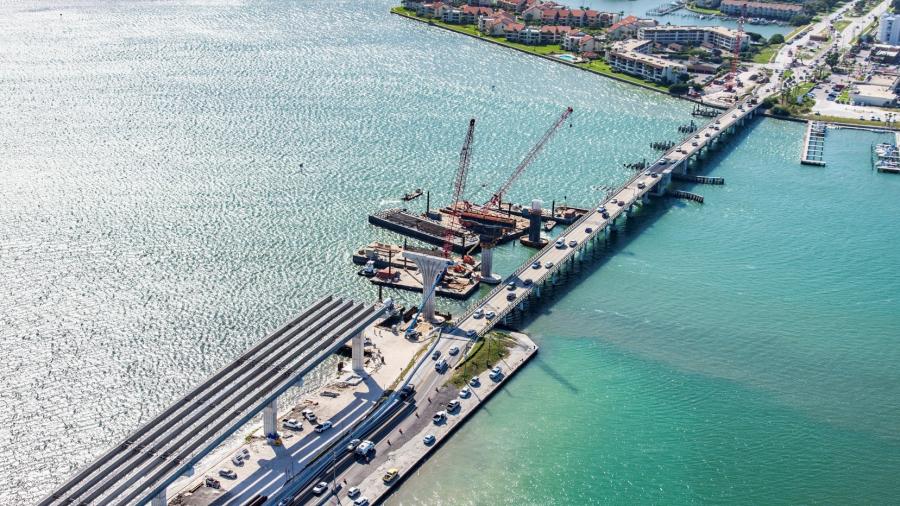 "We're typically working on three or four piers at any one time," said Yates. "As we're working on a footing at one spot, a column is going up behind it."

Many cranes are also on the job.

"The land- and marine-based cranes are instrumental in the construction of the bridge," said Gill. "Specifically, they're for moving and placing many construction components, including 200,000 beams."

Putting up portions of the deck, 17 in total, also requires close coordination.

"We've installed and placed form work to help with the pours," said Yates, who noted that securing skilled craft labor has been an issue. "With all the work in the area, it can be a challenge, but we've got a great corps of craft guys."

Major road work operations began last spring and should be completed in spring 2021.

"We've been working on the roadway," said Yates. "We have a phased plan for working through the roundabout, which is probably the most challenging roadway component. It will be done in phases to make sure we can control traffic and shift it. We have some drainage that has to go underneath the roads."

The demolition of the old bridge is expected to take six months.

"We have a rough plan and we're working through some of the details," said Yates. "We'll have to do some coordination with state agencies and the Coast Guard to develop our blasting plans for the main bascule piers that hold the drawbridge section. Everything else is standard demolition deck removal."

Yates is assisted by Kevin Glass, the design-build coordinator and Mike Banfield, the project superintendent.

"Kevin is doing a great job with design issues and utility coordination and Mike facilitates our field operations, coordinating with environmental agencies and department sectors," said Yates. "We do a lot of safety training and we have formal fall protection for all the guys on heights everyone is trained to make switches from the mobile elevated platforms. Every Monday we have a training topic, with a lot of them focused on marine safety." 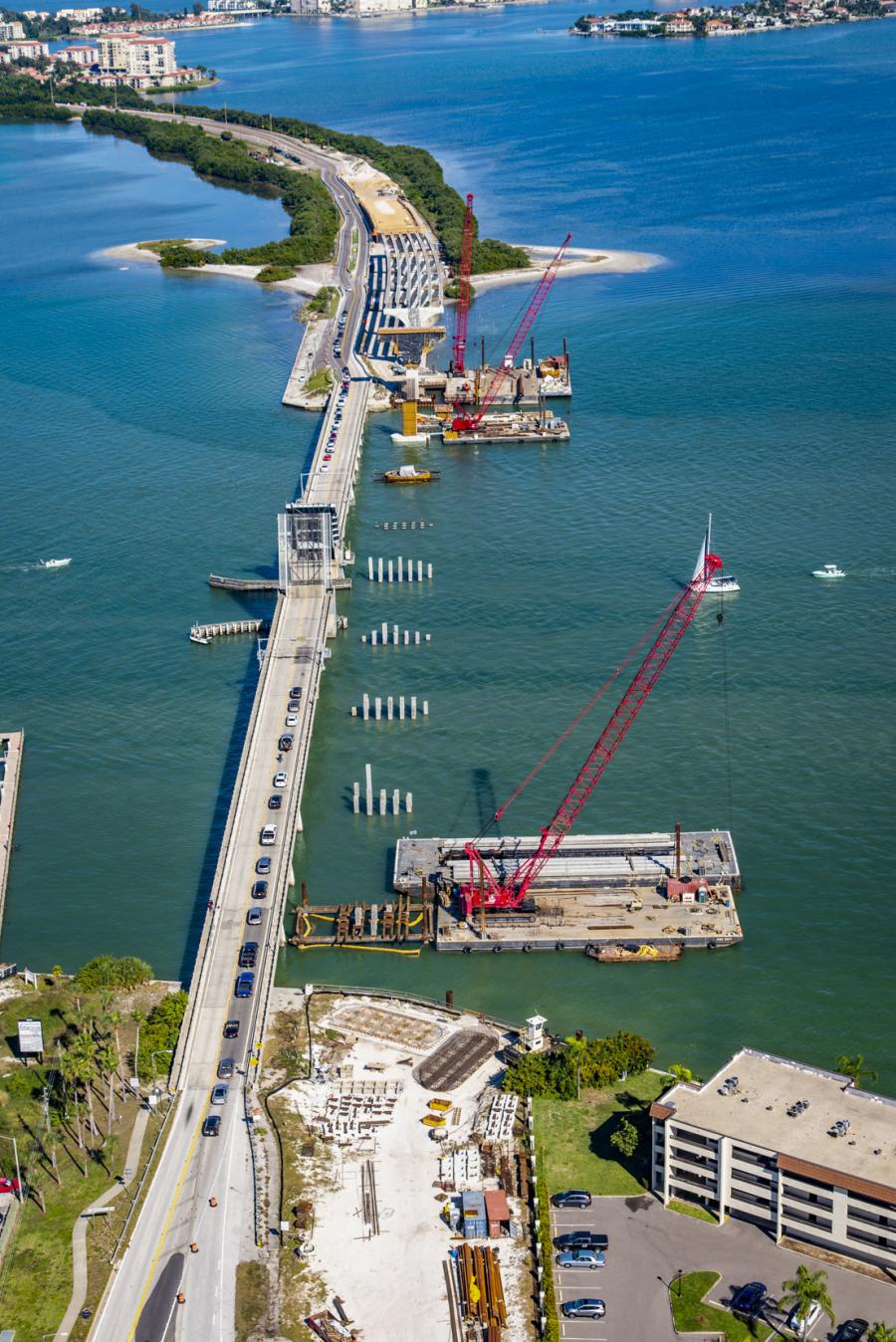 So far most of the work is done via day shifts, but night work is ongoing, particularly for concrete pours that have to be done in cooler hours.

The demolition of the existing bridge and the removal of the material from the roads is expected to yield 5,500 cu. yds. of reinforced concrete and 250 tons of structural steel on the main span.

"We'll use the crushed concrete for building materials and scrap the rebar," said Yates

Crews have been using Manitowoc cranes — a 2250 and two 4100s and an 80-ton hydraulic crane and others, as well as excavators, dozers, loaders, rollers, pavers, barges, tugs and other standard construction equipment.

"All the equipment vendors have been pretty good when repairs have to be done," said Yates. "Working so close to salt water is always a challenge, but we maintain a good maintenance schedule and keep up with everything — if you don't find the time to do maintenance, your equipment will do it for you. We have two on-site mechanics."

"The dealerships give us what we ask for — we tell them what equipment we need and they prepare it for us," said Yates. "We've rented a ton of equipment and purchased a good amount. If there is an issue, we let them know sooner than later before it gets to something that is going to impact us. It's a partnership." CEG