An Eye on Rigging Gear: Complacency Equals the Enemy


Last year, ASME revised its Slings standard to not only include an outline of rigger responsibilities, but guidelines on inspecting slings in special service. Though essential to the crane job site, rigging gear can get overlooked every day by the very crew members responsible for inspecting it and making sure it is in good working order. The new standards volume B30.9-2018: Slings, explains in detail what exactly is required of those responsible.

It's crucial to make sure "the people using rigging gear are trained on how to carry, use and inspect it all," said Tom Horner, corporate rigging inspection manager of Mazzella Companies, Cleveland.

It's important to understand, too, that "when the job is started or new people are coming onto the job site, company policy may have more stringent standards, so you have to make sure the inspection of the gear meets those requirements."

The 2018 standard clarifies that a qualified person should, if necessary, determine additional steps that need to be taken after identifying a hazard during inspection. It also adds a guideline stating that slings in severe or special service should be inspected before each use, and a guideline for maintaining a written record of the most recent periodic inception of slings.

Specific sections of the standard include procedures for finishing fitting surfaces to remove edges on different types of slings. It also adds new language on sling components that employ wire rope slings other than those listed in the standard; and new language on methods of fabrication for wire rope slings. The standard clarifies that a polyester roundsling does not need to be removed due to knots in the roundsling when there are core yarn knots inside the cover installed by the manufacturer during the fabrication process. Removed from B30.9 is a guideline prohibiting slings made with wire rope clips being used as a choker hitch.

Train Them Up Right

"At the heart of it, nylon web slings, wire rope, alloy chain, shackles, below-the-hook devices, all those little things are required to be inspected," said Horner. "So, make sure people are trained and competent to do so, that they're qualified. Make sure you have the right equipment on site and make yourself familiar with each type of rigging gear." 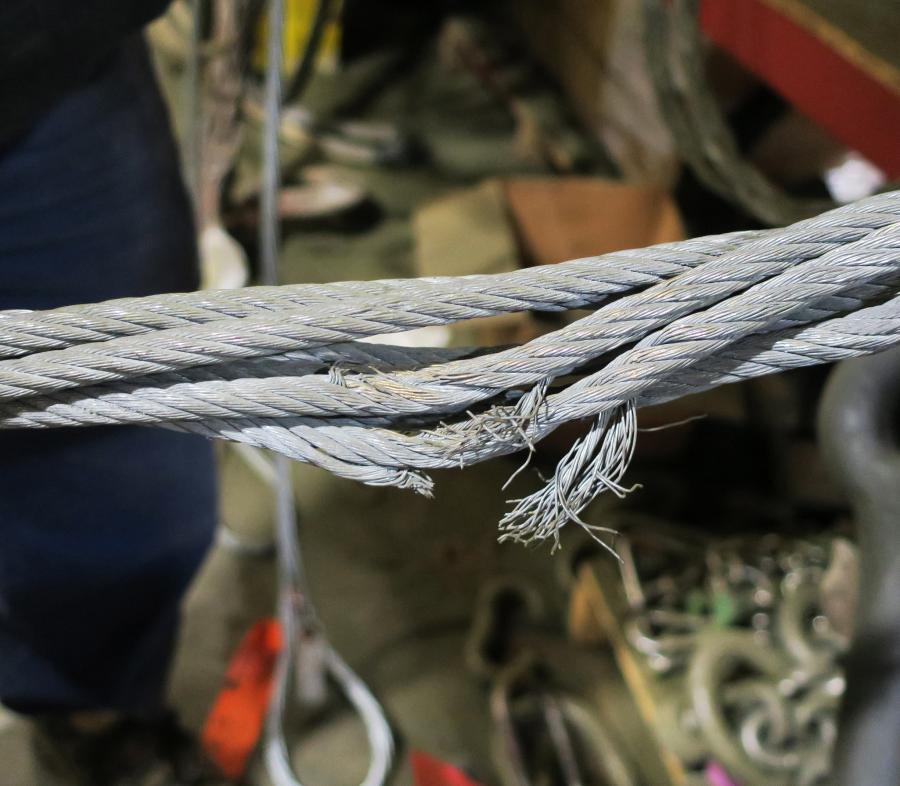 Horner said complacency is a big issue. For example, assuming something you've picked out of a job box is just OK is a mistake. He said often when a crew is done making a lift, they'll hand the rigging gear to someone who takes for granted it's OK for the next job. Or, when a job begins and a manager buys a slew of new rigging gear for the project, he'll toss it all into a job box with older gear. Those who are qualified to inspect rigging gear must understand periodic inspections of individual components are required, along with documentation.

It's also good policy to share what's expected on the job site with all subcontractors, said Horner. On a large construction site with a main general contractor and myriad subcontractors, oftentimes inspection, care and use practices may be solid at the top but different along the subcontractor chain. Subcontractors are responsible for the purchase and maintenance of their own rigging gear, and often these practices don't meet on the same page.

"The top general contractor has their rules and requirements, and as the work trails down to various subcontractors, they might not have been communicated," said Horner. "So, people at the bottom need to show proof that they've been properly trained. They might have low-quality rigging products yet the guy next to them has everything in order. The smallest contractor up through the chain is liable."

He noted that a construction project can last six months or three years, so it's important to make sure you have the processes in place to meet ASME or OSHA requirements, or those of the site owner. Everyone involved in the entire construction project should be on the same page with what's expected, especially in inspections of rigging gear.

"You want documentation that proves there's been a periodic inspection so that you're not only supplying rigging and assuming people are going to inspect it, but that there's a program in place to prove you've done a formal periodic inspection," stressed Horner.

The goal of a sling inspection is to evaluate remaining strength in a previously used sling to determine its suitability for continued use, notes the Steel Erectors Association of America (SEAA). A summer issue of the organization's Safety Flash Newsletter reminds users that daily visual inspections, designed to detect serious damage or deterioration that would weaken the sling, are usually performed by the person using the sling daily. Obvious issues, such as broken wires, kinks, crushing, broken attachments, and severe corrosion, should be looked for. Any deterioration that could result in appreciable loss of original strength should be noted to determine if further use would result in a safety hazard, reads the bulletin. 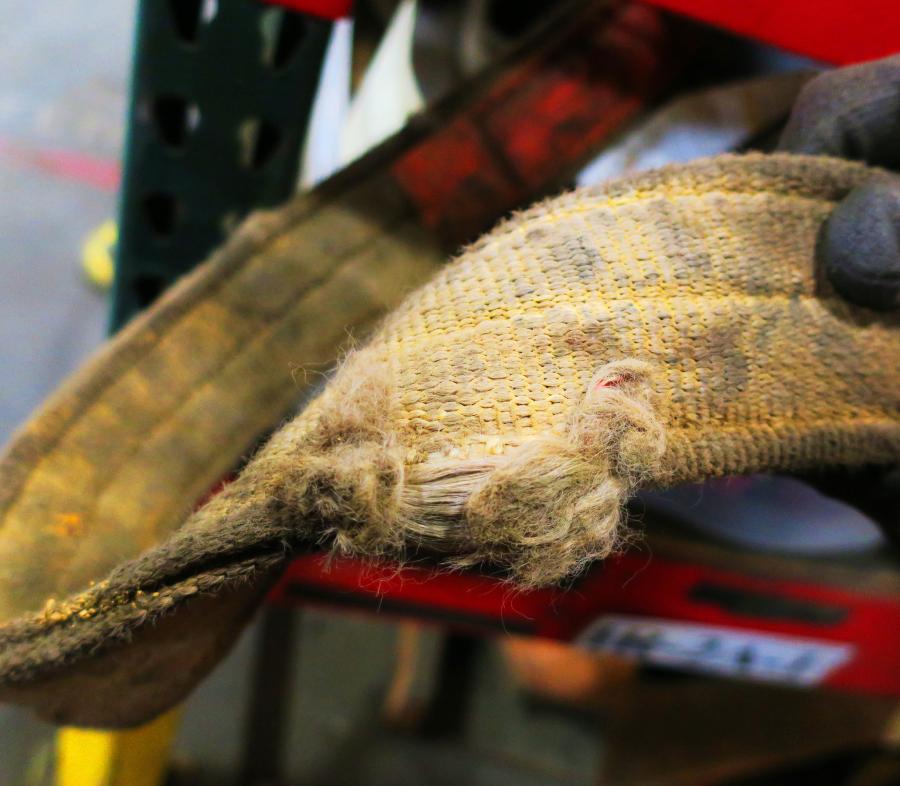 Horner and others offer tips for inspecting various rigging components, beginning with slings. Grabbing a sling without paying attention to its condition or capacity, and on top of that not knowing anything about the load being lifted, are an accident waiting to happen. Make sure you're picking the right rigging for the lift. And make sure you have intact sling tags so the wrong sling isn't used. The tag should be clear and legible, he said.

Also, latches on hooks are required. Make sure latches are operating properly on the crane hook as well as on the sling, continued Horner.

"Nylon slings are popular in construction because they are lightweight and easy to rig with, but they can be torn up easily," he said. "Do your best not to damage them. You also want to make sure you have proper tagging on the sling as well as the right sling for the application. Check for any cuts or abrasions they may have. Make sure you're using corner protection when you rig the lift."

Mike Riggs, founder and president of the Rigging Institute, Aston, Pa., noted that the standard has added a section on high-performance fiber slings. Riggs urges users to get the manufacturer's inspection criteria for high-performance roundslings because there are so many different types.

"For instance, heat is a factor" in roundsling condition, he said, and heat readings are different for polyester roundslings versus high-performance roundslings.

"On high-performance slings, the combination of fibers creates a range of differences in heat readings. If you're using a product with aramid fibers, you can have ratings up to 400 F; without aramid, the heat rating can go as low as 140 F."

One issue Riggs said is hardly addressed in standards of any industry where slings are used on a regular basis is what to do when an inspection detects a faded sling cover, and how to prevent UV damage from exposure to the sun. There is a high potential of UV-related damage to the internal fibers of a roundsling, especially if it's covered by a single jacket versus a double jacket.

"The advantage is high-performance roundslings have the best resistance to UV except for aramids. But because of their capacity they have a denser cover which also helps block out UV damage. It doesn't matter which manufacturer … you need UV protection from exposure to the sun."

Ultimately, the problem is not UV, said Riggs, it's how the user takes care of the sling. And the solution is simple, he added: "Instead of leaving them on the crane hook daily, put them away and you won't have UV problems."

Wire rope, often used in steel construction projects, also must be tagged properly, according to ASME requirements, said Horner of Mazzella. Those performing inspections should look for broken wires, and understand the difference between a kink and a dog leg.

SEAA notes that no more than three broken wires in a rope lay are allowed. Wire rope slings, like chain slings, are subject to damage hidden by dirt or oil and must be cleaned prior to each inspection. In addition, they must be lubricated according to manufacturer's instructions, to prevent or reduce corrosion and wear from friction and abrasion. Before applying any lubricant, however, the sling user should make certain that the sling is dry. Applying lubricant to a wet or damp sling traps moisture against the metal and hastens corrosion.

Corrosion deteriorates wire rope. It may be indicated by pitting, but it is sometimes hard to detect, notes SEAA. If a wire rope sling shows any sign of significant deterioration, that sling must be removed until it can be examined by a person who is qualified to determine the extent of the damage. Using rigging racks or storing slings in a Conex storage container is always a best practice. And using the correct size of shackle while choking slings will prolong the life of the sling. Finally, a monthly inspection color code program will assure inspections are being performed.

Spreader bars and lifting beams should be included in the discussion of rigging gear inspections because the same issues are involved, said Horner.

"You want to make sure they're inspected, and that the identification information is clearly visible on the beam, including the beam's lifting capacity. Then depending on what the device looks like, you want to check it for wear and tear." ASME inspection criteria lays it all out for you unless the manufacturer has more stringent requirements, he says. In that case, you want to follow the strictest standards for the application.

"Make sure nobody's modified the device," he continued. "If the beam isn't quite right, someone might make a fixture, weld it on and consider the problem solved. You want to look for those kinds of issues."

Other questions to ask yourself: Are loads being applied properly? How much are you lifting? Are you overloading the spreader bar or lifting beam?

"You might be using a beam to hold something up and the load arcs it. I've heard stories of items being on a crane that was struck by lightning. You have to be aware," urged Horner. "A beam can be bent if it's been overloaded for years."

Mazzella Companies advises clients on disposing of damaged rigging gear, and Horner said the key is rendering the component unusable. He recounts an old story where someone grabbed rigging gear out of a dumpster, took it home to use on his farm, got hurt, and sued the company that discarded the component. "That's why you must destroy and dispose of defective rigging gear."

If your nylon sling has been torn severely, just go the distance and cut it in half. Cut the sling eyes, as well, he suggested. Make sure it's totally unusable, so a person walking past the dumpster doesn't grab it and take it home or think it's fine to reuse. This policy applies to wire rope and alloy chain slings as well.

SEAA sites the B30.9 standard that reads that a wire rope sling must be discarded when it shows signs of severe corrosion; localized wear (shiny worn spots) on the outside; one-third reduction in outer wire diameter; damage or displacement of end-fittings-hooks, rings, links, or collars-by overload or misapplication; distortion, kinking, bird caging, or other evidence of damage to the wire rope structure; excessive broken wires; or not having the capacity tag.