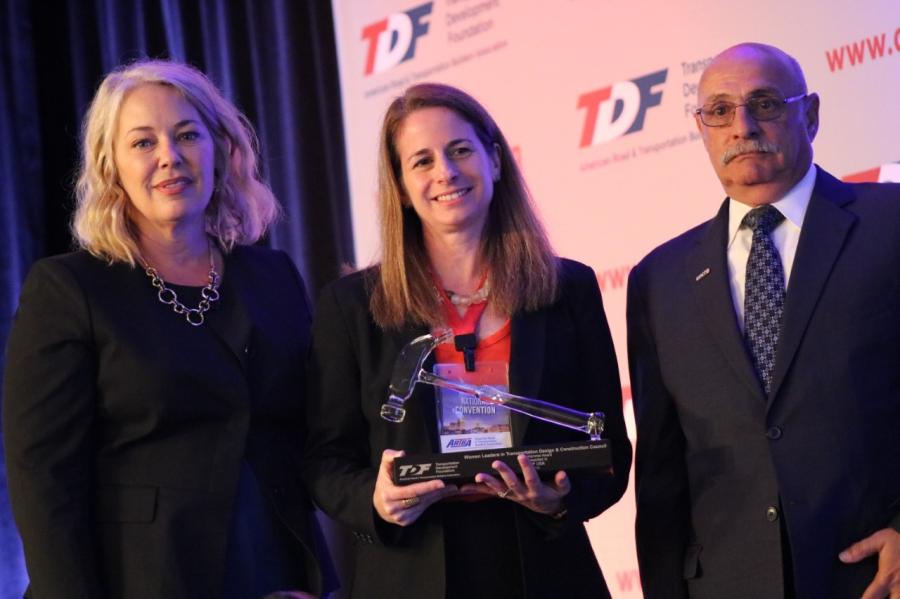 The awards were presented in three categories at a Sept. 23 luncheon held during ARTBA's National Convention in Savannah, Ga.

This award is named after a top ARTBA executive from the mid-1920s and is given to individuals who have demonstrated outstanding leadership, long-term service in the industry's public or private sectors and dedication to the advancement of innovation and other women leaders.

McGinnis began her career in transportation at the Pennsylvania Department of Transportation, where she managed projects in the five most densely populated and congested counties. In 1995, she joined Gannett Fleming and collaborated with a team of engineers and environmental scientists to create the model for how its environmental management and natural resources business line operates today. She has been at the forefront of shattering the glass ceiling and leading the way for females at her firm, blazing a trail from a regional office manager to a senior associate, stockholder, and the first-ever chair of the Gannett Fleming Charitable Foundation.

McGinnis is an inaugural member of the diversity and inclusion committee and is the first female member of the board of directors in the firm's 104-year history. She currently serves as MidAtlantic region director, the largest region at Gannett Fleming, comprised of 24 service lines in 15 offices, with more than 600 employees, and has helped drive significant growth for the last three years.

She is a long-standing member of the Women's Transportation Seminar (WTS) and serves on the Philadelphia chapter's executive women roundtable. She also served as president and director on the American Society of Highway Engineers board.

McGinnis is a co-founder of employee resource group Connected Women at Gannett Fleming and is a role model for the more than 720 women across the firm. Her efforts at gender diversity have paid off, increasing the number of female employees and decreasing voluntary turnover in record numbers.

Berman has dedicated her public-sector career to creating a modern multi-modal transportation system that builds on strong local partnerships to achieve a shared goal of zero traffic-related deaths. A civil engineer by training, Berman spent 13 years at Caltrans, including as director from 2018 until her June retirement. She managed a $15 billion budget, nearly 20,000 employees, and the largest state transportation system in the nation. She also led the implementation of California's landmark Senate Bill 1, the $54 billion, 10-year "Road Repair and Accountability Act."

Berman oversaw the creation of State Road 125 in San Diego, the first public-private partnership of its kind. Her role as a female leader has included mentoring young women in the transportation industry and as a United Way of San Diego volunteer. She has been an active board member of the Intelligent Transportation Society (ITS) of America and the Mineta Transportation Institute. The San Diego chapter of the WTS named her "Woman of the Year" in 2011 and 2011 and 2018.

In its mission to advance and promote women within the workplace, WSP USA is making significant strides, increasing female representation across all business segments and improving gender diversity balance in recruitment. Promotion of women has increased from 37 percent of all promotions in 2018 to 41 percent in the first half of 2019. The company requires at least one gender diverse candidate for every management opening. It also is committed to achieving a goal of women holding 30 percent of management positions by 2021, sponsoring leadership development programs to nurture the next generation. It reinvigorated a formal, national Diversity and Inclusion Council this year, consisting of 21 leaders — including 15 women — focused on creating a work environment that promotes continuous improvement of the firm's diversity at every level.

A WSP International Women's Day celebration implemented a "Better for Balance" toolkit, honoring women in the workplace and a national social media campaign asked its talented women to share what they would tell their younger selves about motivation and lessons learned. More than 400 employees attended a "50 Ways to Fight Bias" workshop and provided examples of workplace gender bias and ways to overcome those challenges. The firm regularly supports and nominates female employees for national recognition through awards and scholarship programs including the Conference of Minority Transportation Officials, WTS, and ARTBA.

This award recognizes students enrolled in undergraduate or graduate studies at a U.S. college or university who have achieved an outstanding academic record and demonstrated extraordinary leadership skills within and outside of the academic environment.

Deliali is pursuing a Ph.D. in civil and environmental engineering at UMass, Amherst, where she received a master's in the same course of study in 2018. She has a civil engineering degree with a specialization in transportation engineering from the National Technical University of Athens in her native Greece. Deliali's research has focused on public health assessments for transportation projects, zero emission bus research, designing and testing a smartphone app that incentivizes users to choose energy efficient transportation options for urban trips, and assessing intersection design configurations for bicycle safety. Her work has been funded by the Massachusetts Department of Transportation, U.S. Department of Energy, and the Safety Research Using Simulation (SAFER-SIM) University Transportation Center.

Khademi is pursuing a Ph.D. in civil engineering at the University of Texas at Arlington, where she received a master's in the same course of study in 2017. Her research projects include assessing driver "sensitivity to dynamic pricing of managed lanes," creating sustainable, inclusive communities in affordable housing, evaluating improved transit connections as ladders of opportunity, state-level transportation policy decisions, and leveraging emerging technologies to respond to transportation infrastructure needs. Funding for her research has come from the North Central Texas Council of Government, U.S. Department of Housing and Urban Development, and U.S. Department of Transportation's National Institute of Transportation and Communities and Transportation Research Center for Livable Communities.

Khademi has served as ITE student chapter president and treasurer, and as a scholar or member of the Chi-Epsilon Honor Society, the Conference of Minority Transportation Officials, American Public Transportation Foundation, WTS, American Public Works Association, the American Society of Civil Engineers, the Persian Academic and Cultural Society, National Society of Professional Engineers, and Women in Leadership. She is a former ambassador for the Center for Transportation Equity, Decision and Dollars student council.