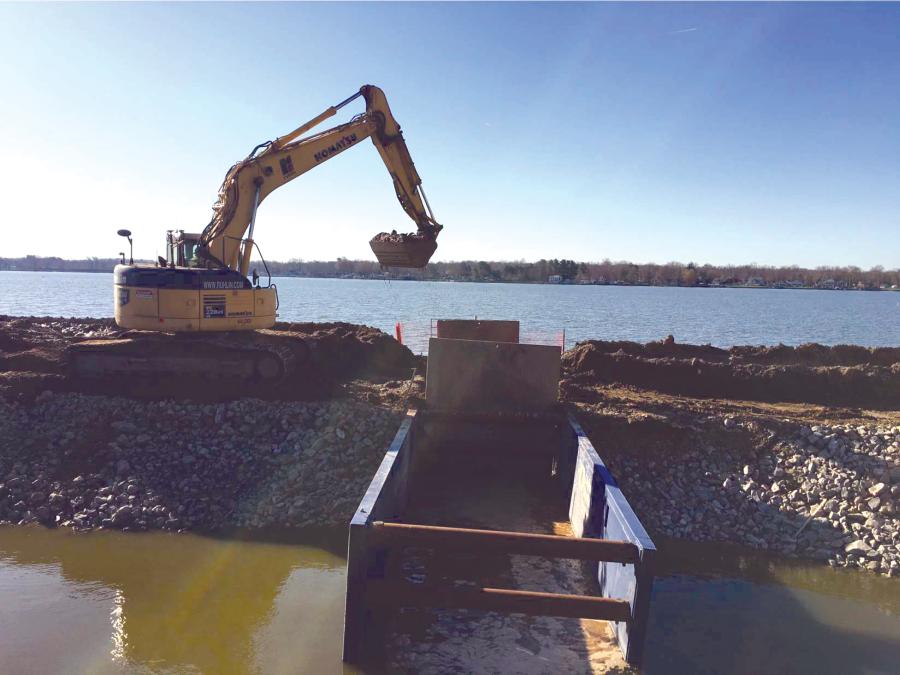 The Buckeye Lake Dam, part of the Buckeye Lake State Park, is undergoing a $110 million rebuild that was awarded to ASI constructors Inc., with design-related services being provided by Gannett Fleming Inc.

The Buckeye Lake Dam, part of the Buckeye Lake State Park, is undergoing a $110 million rebuild that was awarded to ASI Constructors Inc., with design-related services being provided by Gannett Fleming Inc.

The dam, owned by the Ohio Department of Natural Resources (ODNR), is located near the edge of Millersport and the Village of Buckeye Lake and approximately 30 mi. east of Columbus. The lake surface area at the top of the dam is 3,030 acres, and the principal spillway level is 2,800 acres at the normal summer pool elevation of 891.5 ft. above mean sea level. The lake's storage capacity is more than 4.5 billion gallons of water at principal spillway level.

Work on the project began in September 2015 and will be completed in 2019. The project is funded by capital improvement funds appropriated by the Ohio General Assembly.

The dam's maximum embankment height is approximately 15 ft., its principal spillway type is a concrete sluiceway with an AMIL gate and its emergency Spillway (at Sellers Point) is a U-shaped concrete gravity, ungated weir structure with a crest elevation of 892.1 ft. above mean sea level; and in terms of drains, it has a 60-in. (152 cm) diameter pipe at principal spillway, and 60-in. diameter pipe at secondary spillway.

The lake attracts many boating and fishing enthusiasts. The dam needed to be replaced after it was determined to pose a likely hazard in the spring of 2015.

The ONDR is taking nothing for granted. Comprehensive improvements to the dam are needed for it to meet dam safety standards.

While the first phase of these improvements was completed in May, the second phase is yet to be determined and finalized. The dam's deficiencies and relevant dam safety standards were documented in Ohio Dam Safety Program inspection reports (2010, 2005) and in a March, 2015 report issued to ODNR by the U.S. Army Corps of Engineers, according to the website.

Phase One was completed almost one year ahead of schedule, which allowed the ONDR to increase water levels by 2 ft. (.6 m) above the winter pool level. The work included the construction of an embankment stability berm (ESB) — that used nearly 382,000 cu. yds. (292,059 cu m) of local bank material — and a cutoff wall to serve as a new seepage barrier. The cutoff wall was constructed using soil-mixing equipment — two Raito rigs and a Dewind One-Pass trencher — which were assembled at Liebs Island and North Shore.

According to the website extensive defects in the old dam embankment were discovered during the project that had been previously hidden by various kinds of private structures and vegetation. These defects include large voids found in the dam embankment that are suspected to be caused by erosion, tree decay and utility penetrations. These defects are being addressed through various interim risk reduction measures.

This work secured an important milestone as it allows for a higher interim water level to be maintained, support recreational activities and help local businesses.

The plans for Phase Two of the project are being prepared. The design for the new dam is being prepared by Gannett Fleming. The ONDR recently awarded a contract to Grass Groomers Inc. to put a fourth dredge (the only private dredge) into Buckeye Lake this summer.

“The design challenge was preparing plans and specs for a 4.1-mile-long embankment stability berm and cutoff wall within a five month timeframe back in late 2015,” said an ONDR representative.

“The design needed to address over 350 boat docks, a sewer main, yacht club utilities and pedestrian access and maintaining the operation of two spillways within the footprint of the Phase I work.”

The site is in close proximity to more than 350 homes built into the downstream side of the dam which is a highly unusual setting for dam rehabilitation work.

“The dam exceeded its lifespan. It is over 175 years old and had not undergone a comprehensive rehabilitation since constructed. The lifespan of the new dam is at least 50 to 100 years.”

“Phase I was completed in May 2016 and we are starting Phase II,” he said. “As with any construction project, there are quality requirements imposed on the stability berm material and the performance of the cutoff wall. This project is breaking new ground in that cutoff walls have been in use in the interior of existing embankment dams. However this project uses soil-mix technology to create a standalone gravity dam upstream of the existing embankment dam. It is likely one of a kind in the United States.”

ASI Constructors Inc., a heavy-civil engineering contractor specializing in the construction of dams and dam modification projects, agreed to the aggressive 20-hour construction schedule to complete the stability berm and seepage barrier.

“Constructing a new dam is a complex process and the features that make the Buckeye Lake Dam unique are also the elements creating a challenging construction environment for the new dam,” said Pete Buchholz, PE ASI project manager of the Buckeye Lake Dam Improvements Project. “As the construction manager ASI was responsible for overall site safety during construction. In order to ensure site personnel, as well as public safety, ASI employed dedicated construction safety professionals, conducted continues site safety inspections, held weekly site wide safety meetings and completed daily job hazard analysis prior to starting work to identify, eliminate and or control potential hazards. Through this robust safety program/culture, ASI is pleased to report that throughout Phase I of construction there were no major safety incidents involving site personnel or the public.”

The ongoing construction will see ASI crews perform additional work on the cutoff wall at various locations and lead to the removal of the yellow turbidity curtain. By the start of the winter, the old dam is expected to be cleared of patios, flag poles and other defects. Phase two construction of new dam is currently estimated to begin in spring of 2017 after design is complete.

“Phase one included the construction of a 4.1 mile long embankment stability berm that was 30 feet wide,” said Buchholz. “The berm acted as a construction platform for the soil mixing equipment and was constructed around the clock during the coldest weather of the year. Safety of the public, our employees and subcontractors was always our top priority. The soil mixing received much attention but we also had to remove more than 300 docks and other structures that were in front of the old dam and in the way of the berm construction. After removal, these docks were stored on-site for 60 days in case the owners wanted them back.

“Despite the long hours and tough working conditions, the team really came together and completed the project ahead of schedule,” he said. “I'm really proud of the work we did here and am looking forward to finishing the project, which will likely be done in single shifts with regular working hours.”

Testing and verification is essential since the structure is approximately 42 ft. (12.8 m) underground and cannot be inspected directly.

“Since the cut-off wall is underground and cannot be directly inspected,” said Kline, “samples of the cut-off wall are taken using Diedrdich D-50 truck mount for vertical verification core borings. The core barrel used was a pQ3 wireline system. Tests are then conducted based on specifications in the design.”

A variety a different vehicles and equipment were used in the construction of the berm and the cut-off wall. Almost every size of excavator was used from the large Cat 336 an amphibious excavator used in dock removal. Several types of dozers and graders also were used.

The design team at Gannett Fleming will be working to finishing design of Phase II to begin construction in the spring of 2017. Means and methods for Phase II construction have not been determined.