ASR Issues Cause PennDOT to Replace Miles of I-84 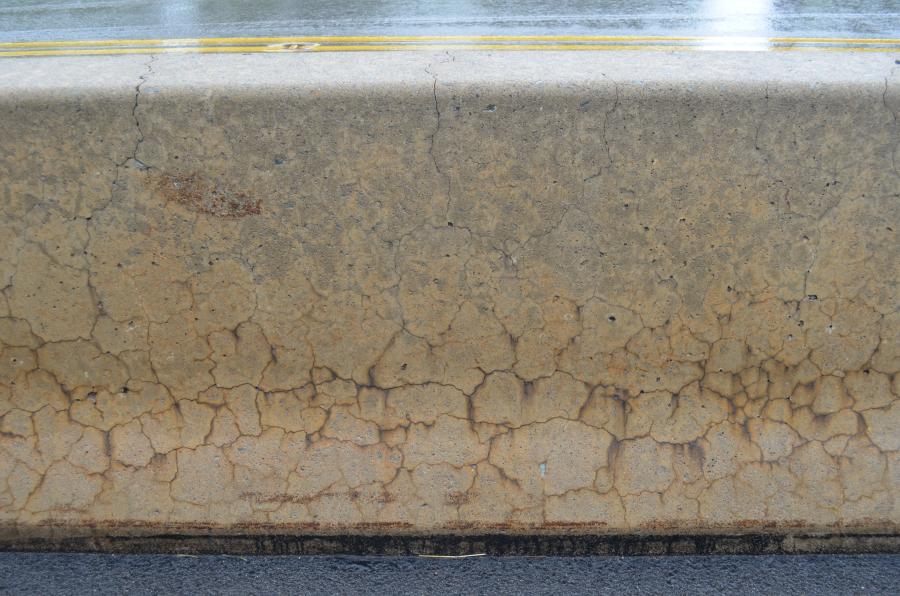 Alkali-silica reaction is a chemical reaction between the alkalis in Portland cement and certain types of silica minerals present in some aggregates.

A few years ago, Pennsylvania DOT began the biggest project in northeastern Pennsylvania since the Casey Highway was built in the 1990s: replacing Interstate 84 through Pike and Wayne Counties.

The highway, built between 1972 and 1977 is “rotting from bottom up,” PennDOT spokesman James May said in an interview with the Pocono Record in 2013.

Along I-84, according to a report by the News Eagle, an unforeseen alkali-silica chemical reaction occurred with the rock underlayment, forming a gel inside the concrete. The gel expands with water and cracks the concrete. The concrete slowly erodes, resulting in a gradual deterioration stemming from the base of the road over the ensuing decades. If not repaired, the entire surface would eventually crumble. First noticed in the 1980s, the problem was diagnosed by scientists in the early 1990s: alkali-silica reaction.

In the 1960s, some sources contend, the cement industry experimented with different mixtures and ingredients, and even the amount of water used. In many locations around the world, certain mixtures, along with age and increased traffic, has led to severe deterioration.

Others, however, like Jim Casilio, director of technical services for the Pennsylvania Aggregate and Concrete Association, remain skeptical. Citing his family's longtime involvement in the cement industry, he said he's unaware of any new mixtures in the 1960s. Furthermore, he said that just because ASR gel is present doesn't necessarily mean it's the main cause of failure.

Alkali-silica reaction is a chemical reaction between the alkalis in Portland cement and certain types of silica minerals present in some aggregates. The reaction product is a hygroscopic gel, which absorbs moisture and swells. Under certain circumstances, the formation of the gel can cause expansion and, eventually, cracking of the concrete.

More specifically, ASR is a heterogeneous chemical reaction that takes place in aggregate particles between the alkaline pore solution of the cement paste and silica in the aggregate particles. The reaction between the hydroxyl ions in the alkaline cement pore solution in the concrete and reactive forms of silica in the aggregate (eg: chert, quartzite, opal, strained quartz crystals) occurs when the hydroxyl ions penetrate the surface regions of the aggregate and break the silicon-oxygen bonds. Positive sodium, potassium and calcium ions in the pore liquid follow the hydroxyl ions so that electro neutrality is maintained. Water is imbibed into the reaction sites and eventually alkali-calcium silica gel is formed.

The reaction products occupy more space than the original silica, putting the surface reaction sites under pressure. At a certain point in time the tensile stresses may exceed the tensile strength and brittle cracks propagate. The cracks radiate from the interior of the aggregate out into the surrounding paste.

The swelling reaction occurs over time in the concrete between the highly alkaline cement paste and the reactive non-crystalline (amorphous) silica found in some aggregates, given sufficient moisture. ASR is measured on the percentage of expansion. Expansion on sidewalks is usually not an issue, Casilio said, but expansions on long pavement and bigger structures can lead to serious problems.

ASR was first noticed in California in the early 1940s, and publicized by T.E. Stanton. Seventy years later, occurrences of this reaction may be increasing, despite knowledge gained over the years.

“It's easy to scare people,” Casilio said, “but you need three things to happen: you need enough alkali from cement; silica, which is in the aggregate, but it has to be the right kind — silica compounds are common on earth, but not all of them are reactive with alkali; and water. The big one is water — and you need lots to cause a problem.”

Signs of potential ASR include “map cracking,” with brown or gray discoloration, Casilio lists. Crazing, which is much more common, also has map pattern cracking, and can be confused for ASR. Crazing cracks are usually much finer, more closely spaced and normally cause few issues. They occur when the top layer dries too quickly, resulting in fine cracks that might be seen only when the surface is wet.

Because ASR can be easy to confuse with crazing and with reinforcing steel corrosion based on visual appearance, the concrete should be tested to confirm a diagnosis.

In addition to the cracking ASR is diagnosed by three other characteristics: presence of alkali silica reactive aggregates, presence of alkali silica gel cracks and Ca(OH)2 depleted paste. Casilio, however, said the only way to truly diagnose is with an “autopsy” after the concrete has failed. The diagnosis of the problem usually begins with laboratory studies involving petrographic examinations that can be followed by length-change measurements of the concrete when exposed to a variety of laboratory conditions.

“It's like the triangle of ingredients for fire; you have to have a fuel source, oxygen and ignition. If you're missing even one, you won't have fire,” he said. “There are few cases of ASR causing damage. It's very difficult to get all three sides aligned for premature surface life failure.”

But it has caused extensive damage on Interstate 84, which connects Northeast Pennsylvania to New York state and New England. All of it needs to be replaced.

“The road is essentially disintegrating from the bottom up,” said PennDOT spokesperson James May. “That's why we're replacing it.”

According to PennDOT, it was the acidic rocks in local quarries in Pike County that caused the problem. Casilio said there are four to five silica compounds known to be bad, but that they're not common in Pennsylvania. Other parts of the country are different.

The fastest growing, outwardly manifested ASR reactions encountered occurred due to particles in fine aggregate used in Minnesota, North Dakota, South Dakota and Iowa. This was a glacier-deposited, easily mined sand containing shale particles with opal-bearing marine microfossils. The solution in that situation was to cure the concrete using limewater, which forms calcium alkali silica gel that has less or no expansive properties.

In many areas of the country, the “good” aggregates have been used up, so the “poorer” aggregates are being used. That, along with higher alkali content in cement, has resulted in ASR occurrences in areas and states previously reported to be free of ASR.

Because it's a more prevalent an issue in the Midwest and is growing everywhere, Casilio said that DOT materials departments are addressing the issue.

“This is important [in order] to get the longest service life [out of roadways].”

In 2013, the Federal Highway Administration published research into the ASR phenomenon, but Casilio said that Pennsylvania, which ranks second in crushed stone production, took the lead in addressing the issue of mitigation of ASR in the mid-1990s by upgrading specifications.

“We have a better understanding of ASR since the 1990s,” said Casilio.

Factors that affect the rate and severity of ASR include:

• the availability of alkalis in the concrete

• the type of concrete element (size and reinforcement details)

ASR can cause such severe concrete deterioration that the concrete becomes more susceptible to damage from other factors, such as freeze-thaw cycles, chloride ingress, corrosion or traffic exceeding its rating.

It is almost impossible to stop the ASR reaction once it has begun. Limiting the ingress of water into the concrete only slows down the progress of deterioration. The best way to mitigate ASR is to prevent it through the use of the right materials in the concrete mixture.

In order to determine what those materials are, the first step is to evaluate aggregate with the best test methods available.

Casilio details the ASTM C1293 test: a prism of concrete is put in a sealed container with water below it; alkalis are added to the cement used to make the concrete prism, and it is kept at 100 degrees for one year, with measuring taking place every three months.

“ASR takes a long time to develop. A history of satisfactory performance is the best method of testing; concrete should be at least 10 years old when examined. The life of a quarry is long, so longer tests are good,” said Casilio.

Unfortunately, some test methods sacrifice accuracy for speed. Casilio said the 14-day ASTM C1260 test gives a lot of false positives. The Pennsylvania Aggregate and Concrete Association, which represents all aggregate and concrete producers in Pennsylvania, coordinates testing and has worked with PennDOT on this testing program and specification development, although Casilio credits PennDOT with taking the lead on that. Pennsylvania recently completed evaluating all aggregate using the 1293 tests. No other state in the region has tested so many aggregates with this method, he said. They use other test methods.

There are several ways to mitigate ASR. One method is to limit the alkali content of the concrete by minimizing the amount of alkali contributed by the Portland cement by using low-alkali Portland cement or by incorporating pozzolan into concrete mixes. The pozollans most commonly used to control ASR include flyash and slag cement.

When pozzolans are used to replace cement, the amount of cement in the concrete mix is lowered. This reduces the total amount of alkali. The pozollans then react chemically to limit the formation of the ASR gel. ASTM tests can identify alkali-silica reactive aggregates and the effects of different alkali-bearing cements and pozzolans.

By specifying slag cement when reactive aggregates are used, the potential of ASR occurrence is reduced. A greater proportion of the alkalis are bound by the hydration products of slag cement compared with Portland cement and this means that the alkali concentration in the concrete pore solution is reduced which, in turn, reduces the risk of reaction with the concrete.

Another option is to limit the use of reactive aggregates.

Fixes Casilio mentions include chemicals to treat ASR to control the reaction; removing/restricting water from penetrating, which limits expansion; and, in rare cases, putting in confining jackets on some structures.

Within the past decade, soluble lithium salts (such as lithium hydroxide) have been developed that mitigate the ASR. However, it's difficult to get them into the concrete.

Much of today's concrete formula includes fly ash or slag cement at levels, which prevents the chemical reaction. If the reactions have not destroyed the concrete's strength, and the expansion is slow, renewing closed joints by saw cutting to re-open them sometimes works. But slow growth cannot be accommodated forever.

In 1997, PennDOT laid asphalt over the concrete in Pike to try to hold it together. However, as potholes form, more water seeps into the concrete below the asphalt, accelerating deterioration of the road. The only viable solution was to rip out the old concrete and start over.

The reconstruction of this 30-mi. stretch of I-84 in eastern Pike County is one of the largest PennDOT endeavors in the four-county District #4 region and possibly in the state. Estimated to cost $300-$500 million, the whole project is projected to last at least 10 years. It has been divided into five sections, which won't necessarily be completed in consecutive order.

According to some sources, the new chemical makeup of cement had become the industry standard, causing widespread failure. Today, engineers specify the mixture, based on research.

Casilio explained that enough alkali is needed to make ASR occur, but that the numbers of alkali for pounds per yard should be limited. New research wants to use a large percentage of pozollans to control ASR, but if you use too much, there are issues: namely, scaling (the top gets weak) and durability. More is not always better.

“You should use the formula for a threshold, but it depends on how reactive the aggregate is,” said Casilio.

Based on the recently completed PennDOT survey, he estimates that 64 percent of Pennsylvania's aggregates are not reactive.

Due to uncertainty in where it develops, Casilio said it becomes an economic choice. However, limiting aggregate sources to avoid ASR would make it very expensive to build anything. The answer, he insists, is to keep sampling and testing.