Advancements in crane operator training simulators run neck and neck with the industry's adoption of simulator technology. The steps forward in system sophistication were incremental during the span since the technology was introduced to the crane sector in the 1990s. But almost overnight simulator providers are bringing better, more realistic graphics and multitudes of possible lifting and rigging scenarios to an industry eager for fast, easy learning.

Today, simulators give instructors the ability to train people in a standard, consistent environment, and train more often. Historically, the industry depended on having a roped-off area, a dedicated machine, and typically a class of eight students — one in the cab, one signaling, and the rest waiting for their turn, said Drew Carruthers of CM Labs, Montreal, Canada. With simulators, "students get much more seat time on a crane. So, they're meeting operator qualifications with more experience and preparedness under their belts," he said. 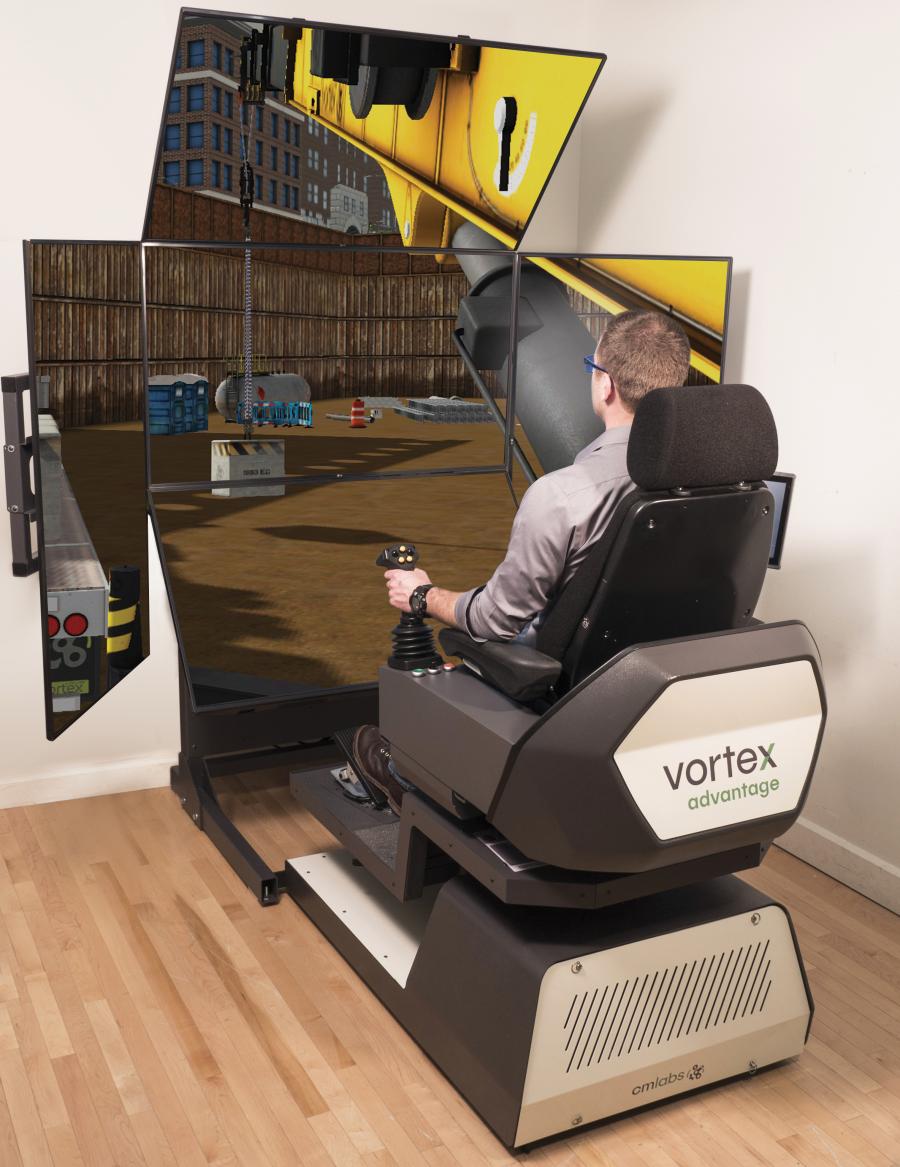 "You're able to see immediate results and get corrective measures in real-life situations. A simulator allows you to apply what you've learned in the classroom, with an instructor in control, so that the training experience is better absorbed."

Another advantage of today's simulator technology is the ability to test-drive a machine when you're considering a career as a crane operator. Simulators have made the process more interactive without all the liability of an inexperienced operator sitting in a real machine. The intimidation factor can be big when you consider the shear size of a crane, said Blanton. A simulator can bridge the gap between intimidation and the field of work.

"A simulator eases the person into operation as it reduces that intimidation, and you can build upon the positive aspects. Simulation is a good way to bridge that gap to youth and get them interested in crane operations as a career," he said.

When it was introduced to the crane industry 20 years ago, simulator technology offered mechanical motion and contact dynamics simulation and visualization in a cab-like setting. Today's virtual reality (VR) simulators involve a desktop and headset to utilize training software. Augmented reality (AR) systems combine camera technology and visualization, allowing an operator to see the environment around him and react to it. In newer-technology CAVE immersible environments, projectors are directed to between three and six of the walls of a room-sized cube.

Since the Oculus Rift and HTC Vive VR headsets were launched in the spring of 2016, for example, the simulator industry has witnessed an incredible advancement in training technology, said Zack Parnell, CEO of Industrial Training International, Woodland, Wash.

"Today, there are dozens of headsets available, and the competition is advancing the technology is a significant way," he said.

When CM Labs entered the simulator field seven years ago, the focus was on safety, said Carruthers. The cost of a simulator was, and still is, miniscule compared to the cost of a crane accident. Today, the company's Vortex simulator technology is geared more toward efficiency as well as the opportunity for higher learning. For instance, CM Labs is using simulators to recreate a crane accident situation so users can see how the accident happened and correct any missteps or mistakes for the future.

"We've been called in three or four times to update a client's simulator so when an accident happens, the client can determine what procedures will be expected of employees going forward," he said. "We now depict wind conditions on a simulator, to help people learn [the effects of wind on a crane]."

CM Labs also works with crane manufacturers so when a new crane model is in production operators can experience that machine's operation before they ever see the crane.

At NACB, the simulator training program has "gone from a lot of graphics, and limited viewing angles to a virtual environment," said Blanton. "We can provide the operator a 360-degree field of view, giving actually an in-environment feel rather than sitting at a desk looking at a giant computer screen."

Seeing Into the Future

When ITI integrated simulators into its industrial and construction training programs, the company started with two crane models and about 200 scenarios. Today, simulation for eight models and more than 1,200 scenarios are available. ITI's content library aids clients in pre-hire screening; long-form training during apprenticeship; new-equipment familiarization; and practical assessments.

"I wouldn't contend that these are new uses, however," said Parnell. "VR has enabled these uses at a much higher level of fidelity and confidence than ever before." 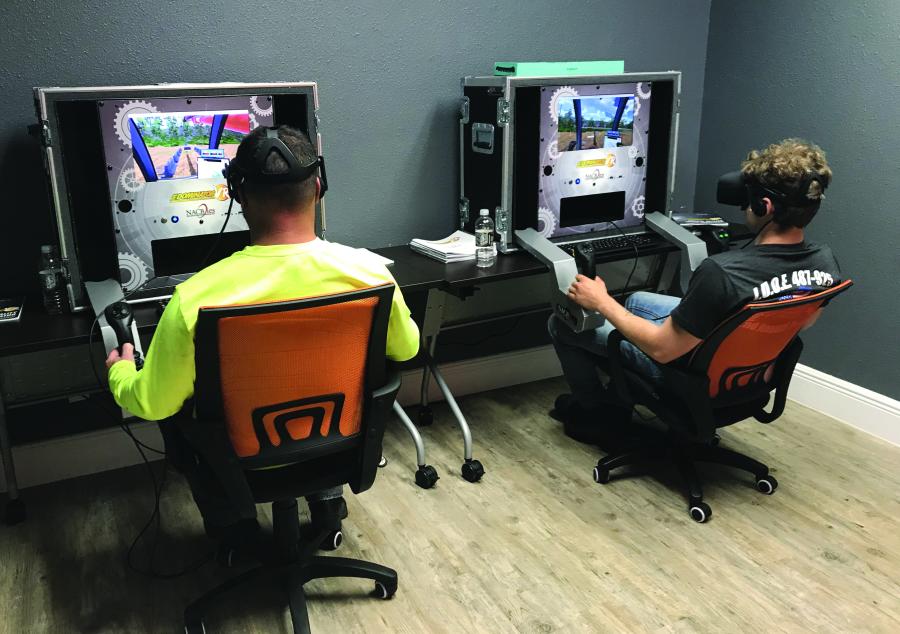 ITI is currently undertaking a study that has already shown that if an operator passes an accredited crane operator certification practical exam in the company's VR crane simulator, that person is 95 percent likely to pass the exam on the real crane.

"We are getting very close to a statistically-proven level of performance that employers and the industry will be able to rely on," said Parnell.

ITI will add three crane models to its simulation library over the next 12 months, including a Liebherr LR1300, which will be integrated this winter. The company is also piloting a VR-based exam pioneered with ExxonMobil on crane and lifting lifesaving actions. Using the Oculus Go VR headset, the exam is intended for any individual working at a refinery, "to ensure that they complete a practical assessment of the lifesaving actions around crane and lifting activities," said Parnell.

The exam can be completed in 30 minutes and 30 people can be processed at a time.

"This is a good example of a practical exam, that wasn't cost-effective nor safe to conduct in the real world, that is an ideal conclusion to an existing course," he said.

Carruthers believes the future of simulator technology is not the shape it takes, but the data and intelligence behind it. Whether the training features hi-def immersive simulators, VR, AR, CAVE, or some other technology, "the real differentiation is going to consist of training that adapts intelligently to the learner's abilities and the training organization's priorities," he said.

"As semi-automated and automated processes become more prevalent in the construction sector, expect to see solutions that focus on enabling the transition from equipment operation to systems monitoring," said Carruthers. "We have already developed solutions that allow organizations to train their staff on remote operation of ship-to-shore cranes in the ports sector, for example."

Simulator training technology in the construction crane sector will remain a viable alternative to traditional classroom instructor-led methods because 24-hour access to three or four systems in a training room as opposed to "beating up equipment," makes sense, said Blanton.

"Will technology change? Yes — It's always based upon what's out there in the industry. We may go more toward process-based systems, where a specific set of procedures provided by a client is practiced over and over before the user goes out into the real world."

He likes the idea that the user can capture real-world environments so it seems like he's operating a tower crane, for instance, before ground is actually broken on the job site.

"Students could be practicing before the building starts to be built," he said. "You could train to a specific project. I believe we'll see these uses more and more as we see simulation become more visible in the industry."

The reality of autonomous vehicles is opening the doors to new uses for simulator training. Simulator providers say remote crane operations may be the next training front. As an example, Blanton talks about a logging company putting an operator in the truck's passenger seat with a VR hood. He's operating the crane loading logs on the back of the truck. He finishes loading, takes that hood off, gets back into the driver's seat, and goes on down the road. "It's just a matter of time," said Blanton.

"Liebherr tower cranes are already being operated by VR. They've got a guy sitting in a box. He turns one crane on, makes a lift and goes on. It's a matter of time before it all bubbles over. Simulator training will roll right into it, because users will learn to operate cranes remotely. A lot of mobile cranes are controlled via radio remote instead of operation in a cab now anyway. Cranes becoming more technologically advanced, and integration of simulator technology with remote crane operators will fold right into it."

Carruthers echoed that perspective. "I feel our industry is going from operators slowly toward system monitors. Equipment is more complex and simulators are allowing people to experience that complexity sooner. We've [engineered in simulation] the operation of cranes that didn't exist yet and allowed users to have a good experience on it."

If operating a real crane is intimidating to a novice, are simulators intimidating to old-school crane users? Despite sophisticated futuristic technology, the technology does have a place in the crane industry. Instructors at ITI have found that VR simulation is ideal for experiential learning, practice time and assessment. Simulators also have their limits. Parnell said even though robust, VR hand controls take a little getting used to. And, "there are some job tasks that require physical touch, like hand-over-hand inspection of wire rope. We could still teach this concept in VR but couldn't deliver the sensation of staging your glove on a broken wire until haptic [touch technology] gloves get a bit further along."

He believes simulators are best suited to training large numbers of operators. Big companies with many crane operators on staff over several states can utilize simulators to provide an opportunity for prospective operators to gain some exposure to cranes before real seat time, "but even then, any operator is going to have to get real time in the seat of a real crane to really learn to control a crane," he said. CQ