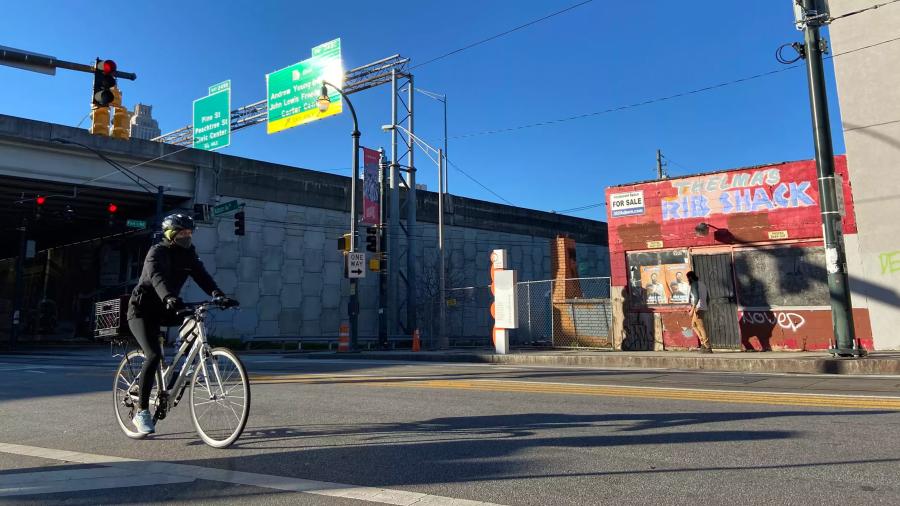 Georgia neighborhoods like Sweet Auburn, Summerhill and others across Atlanta that were split apart decades ago during the construction of the country's interstate highway system could try to repair the damage under a program in the federal $1.2 trillion infrastructure package.

When transportation officials in Georgia and other areas of the country began laying out the interstate system in the 1940s and ‘50s, they often charted many routes through predominantly Black neighborhoods.

The subsequent construction of north-south Interstate 75/85 corridor not only hamstrung businesses in those communities but created a massive barrier that permanently altered the look, feel and energy of the neighborhoods.

Once considered one of the largest concentrations of Black-owned businesses in the country, Sweet Auburn was home to Atlanta's first Black-owned radio station, daily newspaper and office building, as well as being a business, political and cultural hub.

The Reconnecting Communities Act, introduced in 2021, makes available $1 billion to cities across the United States to fund "planning, design, demolition and reconstruction of street grids, parks or other infrastructure."

Projects to reconnect neighborhoods also are eligible for other federal funding.

Some Atlanta groups want to cap interstate segments in the city's downtown, midtown and in Buckhead with parks, but burying or removing I-75/85 is almost unimaginable, Axios Atlanta reported.

Despite that, managing the flood of cars roaring off the interstate through Sweet Auburn, along with improving public spaces, reducing heightened temperatures and increased pollution caused by the freeways are practical options, said LeJuano Varnell of Sweet Auburn Works, a community nonprofit.

So are programs to help start small Black-owned businesses and incentivize entrepreneurs and restaurants to create anchor businesses, Akila McConnell told Axios. She is a historian who leads tours in Sweet Auburn and the Old Fourth Ward with her company, Unexpected Atlanta.

However, a $1 billion program can only go so far, community and equity advocates said, but the investment is a great first step.

"There's likely no amount of sugar you can add to turn this historic lemon into lemonade," Varnell admitted, but added that funding and innovative thinking could "right some of the historic wrongs that [the interstate] has created over the past 60-plus years."

The construction of the I-75/85 expressway decades ago, for instance, displaced 7,000 residents, Newman told Axios, around 75 percent of whom were renters.

"When you add urban renewal, 55,000 total people were displaced, of whom 93 percent were African Americans," he noted.