Auburn Embarks On Its Largest Athletics Project in School History 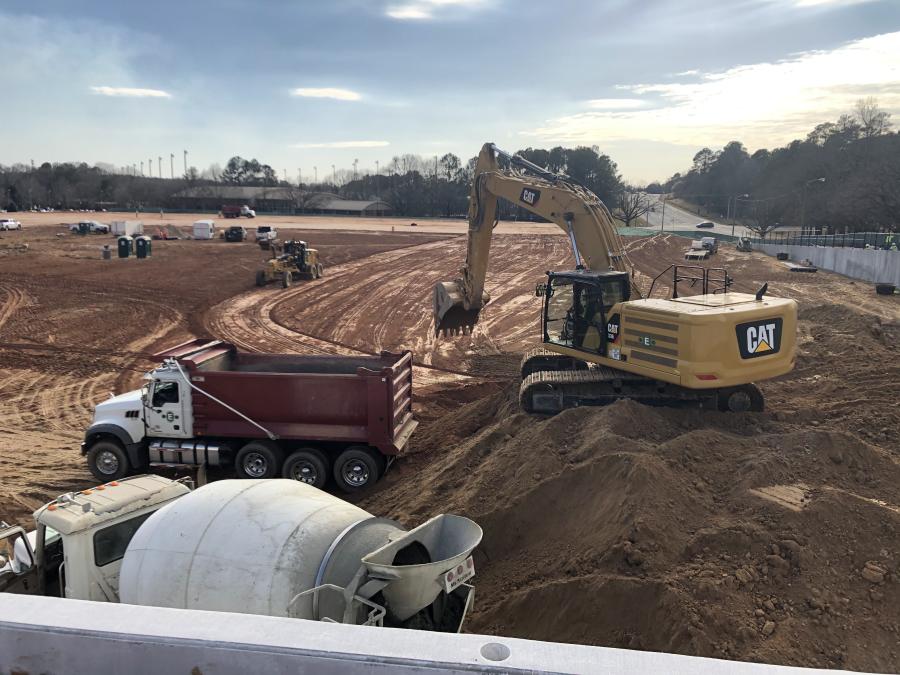 A total of 130,000 cu. yds. of dirt was exported from the site. (Evergreen Siteworks photo)

In east-central Alabama, construction is under way on the largest athletics project in Auburn University's history. 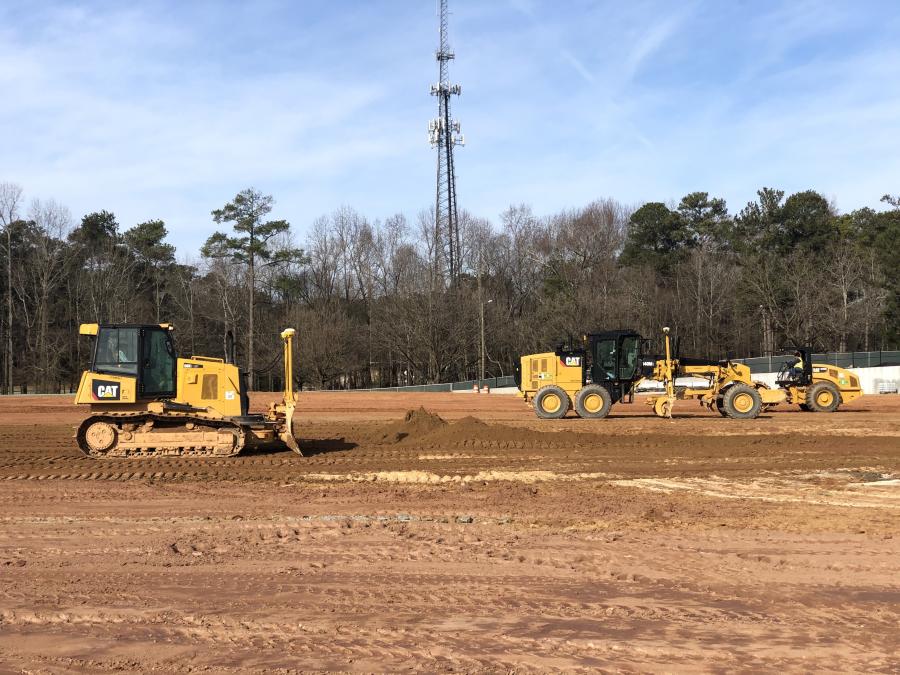 "Auburn was on the leading edge for football facilities when the current facility was built in the 1980s," said Yann Cowart, vice president, sports architecture of Goodwyn Mills Cawood architecture and engineering firm. "Since then, the world of collegiate sports has changed dramatically in a number of ways, including conference expansion, dominance of the SEC, recruiting, player development, wellness and recovery and player retention.

"The facility has consciously aligned player development as its guiding principles, while keeping the facility integral to the campus fabric and collegiate experience."

The project will include a weight room, indoor and outdoor practice fields, an equipment lab, a hydrotherapy pool, a player's locker room and lounge and a teaching lab adjacent to meeting rooms. Cowart said the project would not have been possible without the vision of the university's president, board of trustees, athletics' leadership and alumni who share a love for the university and what it represents.

According to campus architect David Bess, design lead for the project, "The intent of the football performance center project is to provide the Auburn University football program with the key and essential capabilities and resources needed to successfully compete with its SEC and national peers.

"When the project was initiated, Auburn University began a search for an architectural team with specific expertise in designing collegiate football performance and operations facilities for Power 5 conference athletic programs. We knew we needed extensive experience in athletics master planning and successfully executing the design and construction of collegiate/professional football performance and operations facilities."

The two-story building will be located on the site of the old Hutsell track on the corner of West Samford Avenue and Wire Road.

"The facility is near other athletic facilities on campus," said Bess. "It's visible and located along Auburn University's new Parkerson Mill Creek Greenway path. The site is easy to find, and it's walkable to campus. As a result, the center is welcoming to its visitors and is convenient to student athletes, coaching staff and administrative staff that also need access to other areas of campus.

"This site's selection allowed for the design team to maintain an engaged campus experience for the football performance center's occupants, as well as the common campus pedestrian that walks by the facility on a daily basis."

"Steel will top out in December, and the entire building will be in the dry by March," said Peacock. "The new team lockers will be installed in July. Prior to the start of the construction of the football performance center, there was a project to demolish the old tennis courts and old Hutsell track. The tennis courts were relocated to the intersection of Hemlock Drive and W. Thach Ave."

Peacock noted that the most time-consuming part of the project was the procurement and installation of the steel structure.

"Due to COVID lead times, this hindered any work from really starting until the framing was in place." 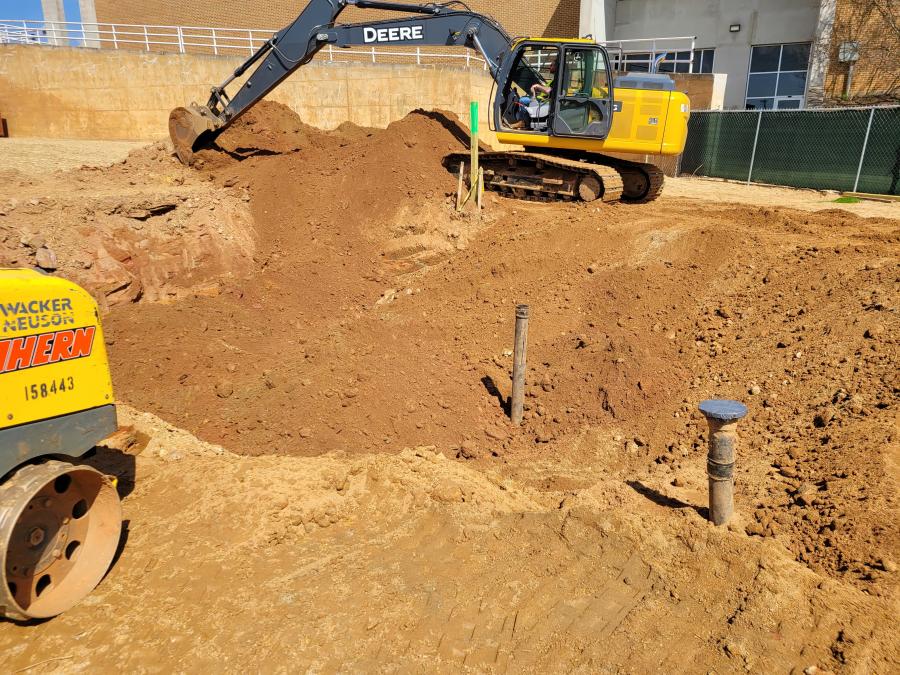 Rabren General Contractors is overseeing construction under the direction of lead superintendent Billy Runnels, a 2005 Auburn University graduate. Georgia-based Batson-Cook was awarded the earthwork contract, and Evergreen Siteworks of Opelika, Ala., served as a sitework partner.

"We were responsible for erosion control, demolition, grading the site, underground utilities, curb and gutter and a small amount of asphalt paving along Biggio," he said.

"There were a lot of existing utilities that conflicted with the new design, which caused some of the design information to be inaccurate, but the team worked through the challenges well," he said.

"Sanitary sewer was difficult, due to having to maintain the flow," said Thomas. "We had to bypass pump as we made the new connections. Water was a challenge due to boring under Samford Drive, and many conflicts with existing and new storm drainage inverts. Storm drainage was pretty standard work."

"We offered an alternative to the design box culvert — an underground detention system provided by Old Castle. The system was certainly an upgrade from the design and allowed us to install the work in a shorter time frame."

Thomas added that underground utility work was a crucial step in the overall building process.

"The utilities required to service a structure of this size and purpose are extensive. The main lines must be put in ahead of the building construction, which creates a challenge to perform that work without damaging the utilities. And the work must be installed correctly and in a quality manner, so that repairs/re-work are not required after buildings, paving, etc., is complete."

"We used two excavators to load 10 to 12 highway dump trucks, which transported the material to a location more than seven miles from the site. When the material was received at the ‘dump site,' it had to be handled to allow room for the trucks to come in and out. A lot of effort went into maintaining the construction entrance, and at times, some of the roadways had to be cleaned."

Prepping the building pads involved using GPS equipment, which has the ability to achieve finish grades of less than +/- one inch. With this technology the work is fairly simple.

"The current GPS technology is very advanced. A surface model is created using the existing contours and the design grades. A GPS signal is used to move the blade on the equipment being used to grade (dozers and motor graders), so that the cuts/fills are extremely accurate. This technology can also be applied to excavators for the purpose of digging a trench for utility work to the same accuracy." 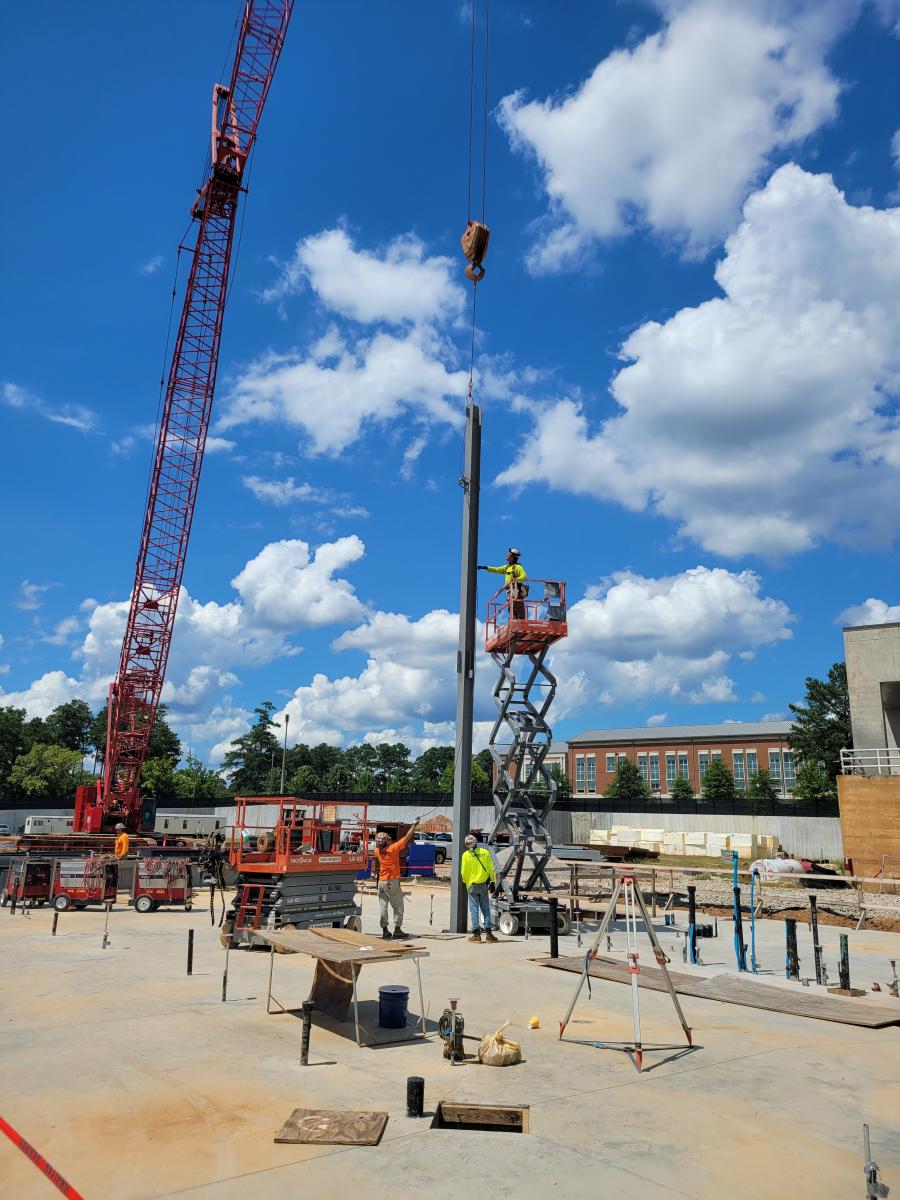 Evergreen used a variety of heavy machinery on the job.

"We utilized all Caterpillar equipment for our work, including excavators, dozers, compactors and motor graders. Craneworks provided a 120-ton crane for two days while we set the underground detention. ALL Crane used a 300-ton capacity crane to remove the large light towers that were existing on site. Eight-inch pumps were used during the sanitary sewer bypass, and miscellaneous equipment included skid loaders, power brooms and water trucks."

"For this type project, you must have experienced operators, lead men, etc.," said Thomas. "The schedule requirements make it so you must have a really good work plan with the ability to modify the plan when things do not go as expected."

The undertaking is one Thomas won't soon forget.

"This was one of the larger sitework projects the university has ever let, and with the scope of the buildings and fields, I have no doubt it is one of the largest overall projects in Auburn history. It ranks as our fourth largest project ever, and while it presented quite the challenge, proper planning allowed us to meet the required schedule and perform the work in a safe and quality manner.

"It's an extreme source of pride for all who have participated in the work to see the end product that will be a valuable asset for Auburn football for many years to come. Also, Batson-Cook is made up of some of the most ethical and knowledgeable people in this business. It was a great pleasure to work with them and their team on the project."

Cowart added, "This is a bucket list project for all involved. Anytime you have a chance to be part of the team's success in the future years brings pride and reward to the effort placed on every detail." CEG