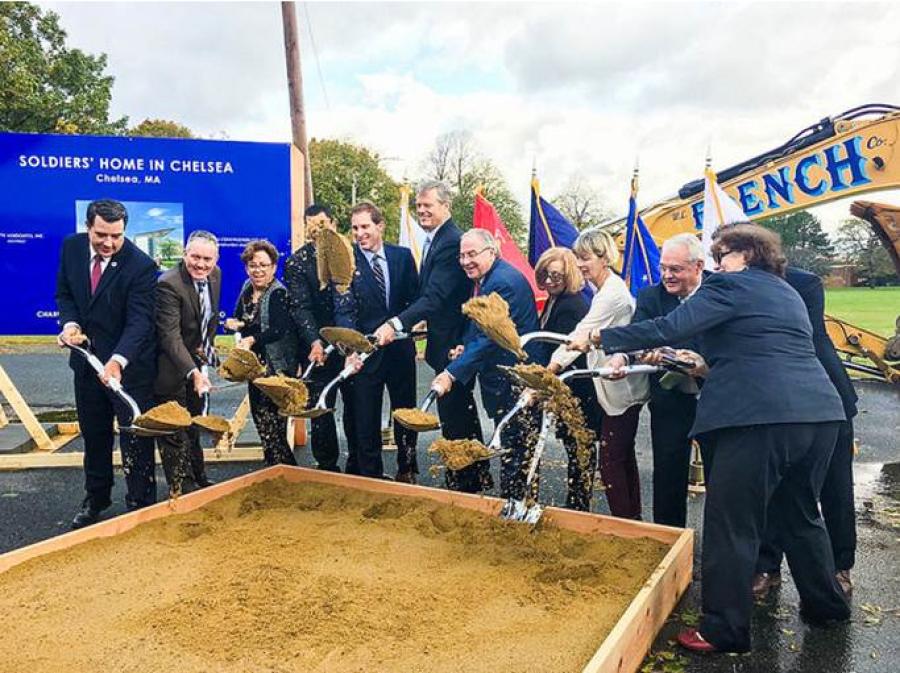 Veterans of the United States Armed Forces and officials were on hand for the groundbreaking of the new long-term care facility at the Chelsea Soldiers’ Home.

On Oct. 29 Gov. Charlie Baker joined Secretary of Administration and Finance Michael J. Heffernan; Secretary of Health and Human Services Marylou Sudders; Secretary of Veterans' Services Francisco Ureña; House Speaker Robert DeLeo; and veterans of the United States Armed Forces for the groundbreaking of the new long-term care facility at the Chelsea Soldiers' Home. The current facility will continue to be fully operational, caring for 154 veterans, during the construction process with an anticipated project completion date in 2022.

"The new long-term care facility at the Chelsea Soldiers' Home will improve the quality of services and care provided to the Commonwealth's men and women who have answered the call of duty and served our nation," said Baker. "Our veterans and their families have sacrificed so much for this country, and it is our duty to care for them with honor and dignity."

"The Commonwealth owes a great debt to the veterans who have served America," said Lt. Gov. Karyn Polito. "Constructing this new facility in Chelsea is a small way to ensure their sacrifices are not forgotten, and we are thankful to the Legislature and the VA for supporting this project."

In May 2017, Baker announced plans for a new long-term care Community Living Center (CLC), which was included in the Baker-Polito Administration's Fiscal Year 2018 capital investment plan, and in November 2017, signed legislation authorizing funding needed to advance the project.

The Administration also has received funding authorization from the United States Department of Veterans Affairs (VA) for the $199 million project. The federal funding was awarded through the VA's State Home Construction Grant Program which provides reimbursement of up to 65 percent of construction costs for approved projects. The Administration, with strong support from the Legislature, plans to spend approximately $70 million net of federal reimbursement on the project.

"At Consigli, we respect the selfless commitment veterans have made in defense of our freedom, and we are proud to have many veterans on our team," said Matthew Consigli, president of Consigli Construction Co. Inc., the construction manager for the project. "It's truly an honor and a privilege to be a partner on this transformational project that will create the highest-quality facilities to serve the dedicated members of our armed services."

The Soldiers' Home in Chelsea first opened its doors to Massachusetts veterans in 1882. The first residents were Civil War veterans who were wounded or unable to care for themselves, many of whom had previously resided in the Commonwealth's "alms houses." Today, Chelsea carries on Massachusetts' proud tradition of helping all veterans in need of both long-term care and domiciliary/supportive services.

The Department of Veterans' Services (DVS) advocates on behalf of the nearly 365,000 veterans in Massachusetts, their families and survivors.