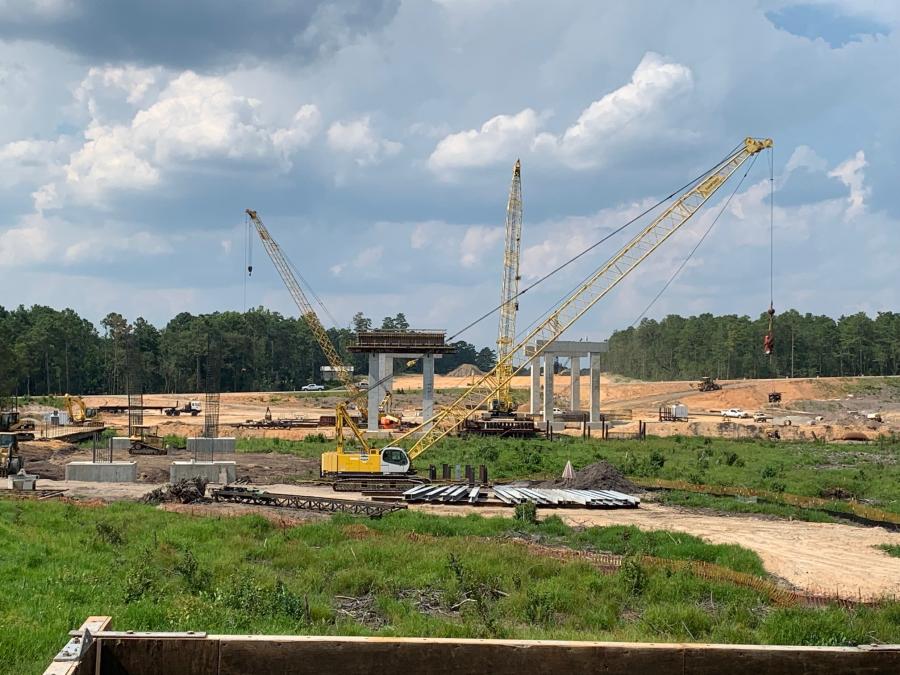 The Outer Loop's path will take the freeway from Interstate 95 at its current intersection with U.S. 13 to the west and south of Fayetteville and reconnect with I-95 north of St. Pauls in Robeson County. The Fayetteville metropolitan area, which is experiencing a surge in population and commercial/industrial activity, is home to more than 300,000 residents today. 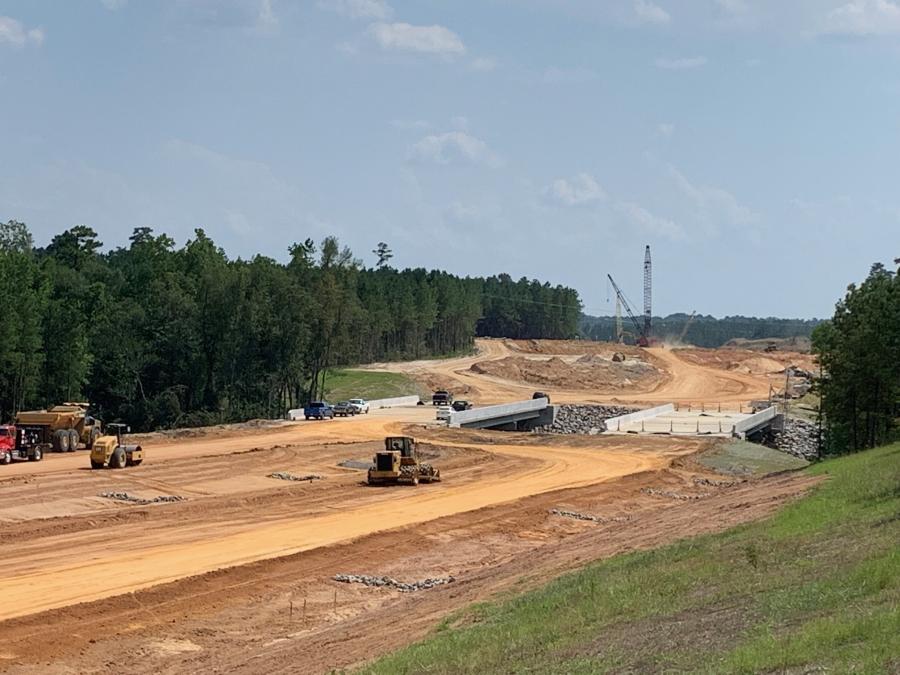 "The Outer Loop will provide unprecedented interstate connectivity for the region and provide Fort Bragg with direct connections to I-95," said Andrew Barksdale, NCDOT public relations officer. "It is critical for the region as it will help support the military, promote continued economic growth and strengthen North Carolina's ability to attract and retain business and industry. It will also reduce traffic on portions of the local street network, connect major routes in the south, west and north portions of Fayetteville and provide an additional crossing of the Cape Fear River."

One of the contracts is the $100 million Cliffdale Road to U.S. 401/Raeford Road design-build that has the Barnhill Contracting Company constructing 3.1 mi. of the four-lane freeway (two lanes in each direction). While not a joint-venture, Barnhill's team includes Sanford Contractors Inc., which is responsible for the bridge construction, and HDR Inc., which is responsible for the project's design and engineering elements.

The contract was awarded in June 2016 and work began in February 2017. Completion is expected by August 2022. The work area extends from the Cliffdale Road interchange to the U.S. 401 (Raeford Road) interchange in western Fayetteville. The southern end has the new road placed next to Lake Rim, the John M. Pechmann Fishing Education Center, and fish breeding center operated by the state's Wildlife Resources Commission.

In addition to the new freeway, which is being built primarily on what was formerly a forested area, as well as on some existing sections of road that are being transformed, the work includes: Replacing the Lake Rim Runoff bridge on Old Raeford Road over Bones Creek, construction of a new interchange at U.S. 401, a roundabout where Raeford Road connects with Old Raeford Road and South Reilly Road, and drainage infrastructure.

Donavon Hunt, one of NCDOT's resident engineers in Fayetteville overseeing this segment of the Outer Loop's construction, explained the benefits of having this section constructed via design-build.

"The design-build concept helps complete projects faster by allowing the design, environmental permitting, right-of-way acquisition, utility relocation and construction to all take place under one contract," he said. "That helps the department lower cost inflation, lessen environmental impacts, and by completing a project faster, reduces construction driving delays for motorists."

According to Hunt, an issue at the beginning of the project was acquiring right-of-way on some parcels. "The topsoil that was removed will be placed back to grow vegetation," he explained. "In terms of utilities, we are taking out old systems and installing new systems such as 30 in. sewer line and 24 in. waterline. Other utilities such as power lines were moved by others prior to construction in those areas. Best management practices are being utilized to prevent debris from getting into Lake Rim, and this includes erosion control devices that are inspected once a week and after every inch of rain or greater. NCDOT's roadside environmental unit and a division environmental officer are on site at least once a month. An assessment was performed before construction of the project started, and it determined that no endangered species were found in the work area." 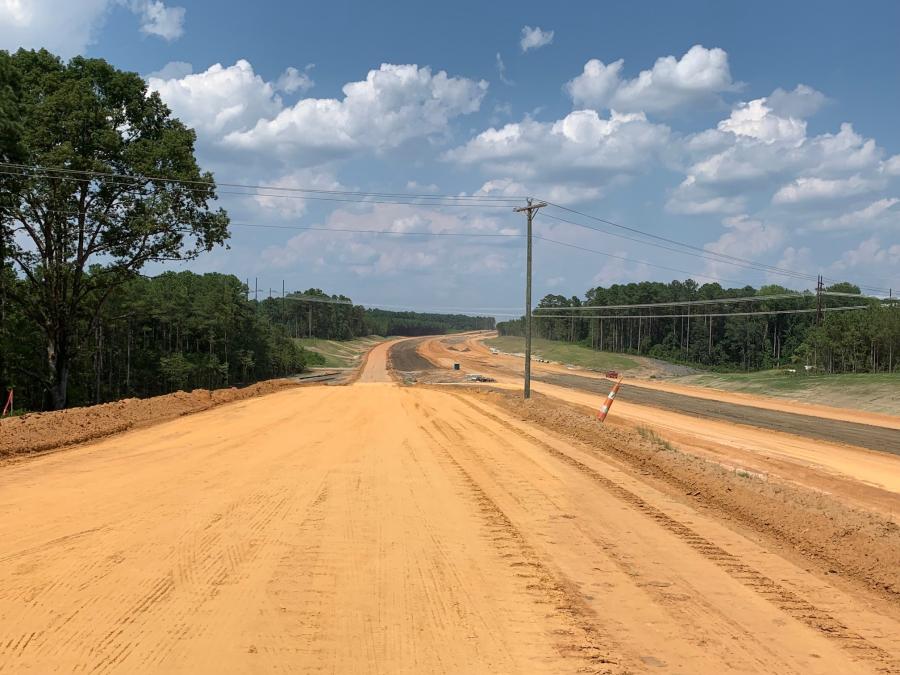 So far Barnhill Contracting has completed the following elements: The demolition and replacement of Bridge No. 14 on SR-3569/Old Raeford Rd. over Bones Creek (Lake Rim runoff). The benchmarks for the 2019 construction season are to complete utility work on the 30 in. sewer line and 24 in. waterline, as well as continue with grading and structure operations.

"Material is readily available and staged on site for quick access," Hunt stated. "Crews are working nine to 10 hours daily. The contractor is currently installing a new 30 in. sewer line that is 1,200 feet in total length and should be completed by early August. Then they will start installing a new 24 in. waterline that should take eight to 10 working days. Issues that arise are solved pretty quickly as we meet and work together to resolve them to keep the project moving."

The clearing of the forest and fields started in November 2017 and operations are ongoing.

"Clearing and grubbing is being performed using mechanical equipment and hand clearing operations [chainsaws]," Hunt said. "Clearing limits were surveyed by specific location. Some material was stockpiled for a few days and then hauled off. Off-road trucks are being used to haul dirt as everything is new construction at this point. Debris designated for disposal and generated at locations within the project limits were taken to waste or borrow sites in Cumberland County, in accordance with state and local rules and regulations."

With most of the land cleared, the earth work operations began in July 2018. The earth work is being completed using off-road dump trucks for hauling and the design was performed in a manner to balance the project, removing material from high areas (cut sections) to the low areas (fill sections). A grass median is being placed between the northbound and southbound lanes. The road base is 12 in. of asphalt on the "L" line, and ditches were cut and graded along the roadway.

With essentially no traffic affecting the work area for the new freeway, crews are able to work on both sides of the asphalt road simultaneously, which is 44 percent complete and about seven percent ahead of schedule.

The old Lake Rim Runoff bridge, a 40-ft.-long concrete girder bridge with one lane in each direction, was removed and replaced with a 70-ft.-long cored slab-type bridge, which was constructed between February and December 2017. The old bridge was removed and the new one was placed over the dam in same location. 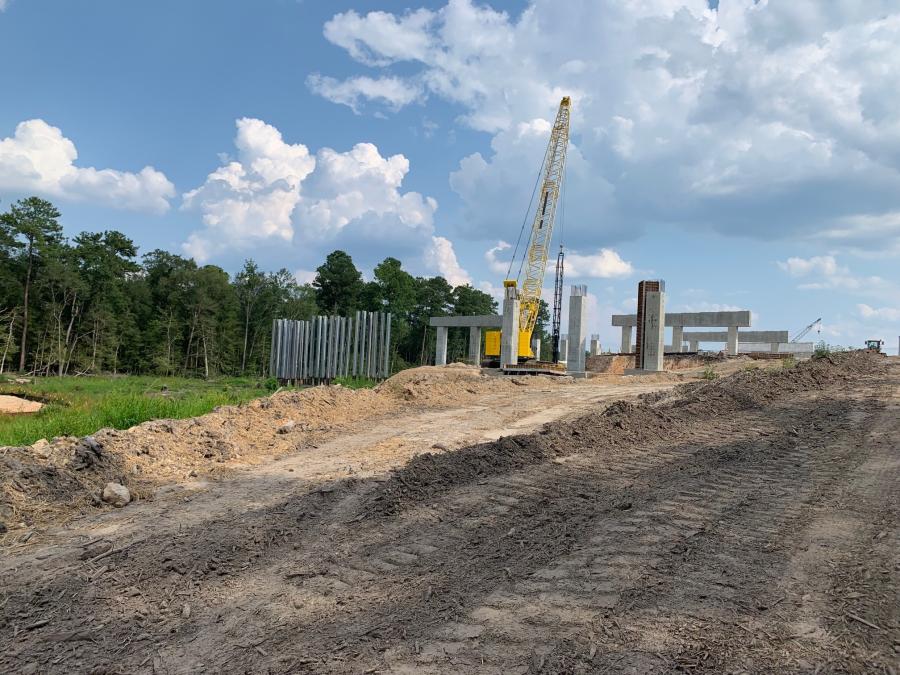 "We kept the existing spillway walls," Hunt explained. "The contractor removed the existing bridge by saw cutting and not using vibrations, which could have caused damage to the existing spillway and adjacent dam. To protect the dam, the water level of the lake was lowered during construction and tarps were placed across the spillway to capture any debris."

NCDOT permanently closed a section of Old Raeford Road to make room for the new highway and interchange with Raeford Road. Work on this element began in February 2017 and was completed in December of that year. Construction on the interchange at U.S. 401 began in December 2018 and should take about 24 months to complete at a minimum. Temporary lane closures on U.S 401 will be implemented during the day as needed from 8 a.m. to 4 p.m. and at night from 10 p.m. to 5 a.m. to set the girders and install overhead sign structures. The interchange will be a single point urban interchange, according to Hunt.

Peak days see nearly 15 Barnhill workers, 28 Sanford employees and those from the subcontractors. There are 20 subcontractors associated with the project, including Smith Rowe for bridge work, Lineberry for seeding and mulching, several trucking companies for hauling and Hauls Tree Service for clearing and grubbing.

Barnhill expects to remove large amounts of concrete and steel, along with 4,530 sq. yds. of asphalt. "The dirt is being moved around (utilized) on the project from cut areas to fill areas," Hunt said. "Some of the wood was mulched and placed on shoulder slopes for stabilization erosion control."

New material to be used is still being tabulated. The NCDOT onsite team consists of about 16 people, including inspectors and engineering staff.

"The challenges of overseeing a multi-year project like this include being able to balance the work load with other projects and ensuring that the project has the inspection staff needed to cover multiple operations occurring at once," Hunt stated. "And being sure to keep an open line of communication between NCDOT and the contractor to stay on top of issues that arise, maintaining a good working relationship. This project has great opportunities to train lower level technicians on all aspects of a highway construction project, such as utilities, earth work, structure work, concrete testing, density testing and paving operations." CEG