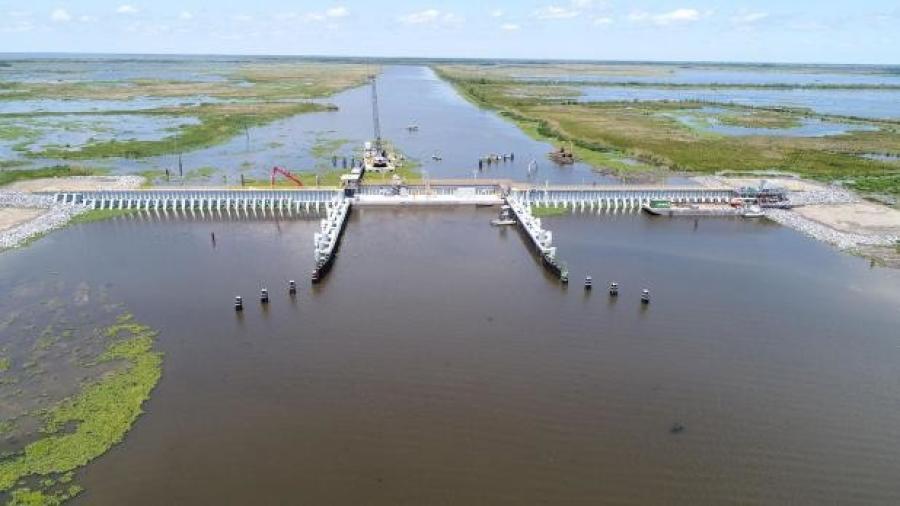 Sealevel Construction of Thibodaux, La., the company that has been awarded two major contracts for the state's Bayou Chene Flood Control Project, has now earned a National Excellence in Construction (EIC) award for its Falgout Canal Flood Control Structure in Dularge.

The company will be recognized at the EIC awards program Aug. 18 in Nashville, Tenn.

"This award is a huge honor," said Sealevel President Richard Roth. "We are extremely proud of our team's accomplishment."

The Falgout Canal Flood Control Structure is the last major floodgate to complete the southern portion of Louisiana's Morganza to the Gulf Hurricane Protection System, a 98-mi. alignment composed of levees, locks and floodgates designed by the U.S. Army Corps of Engineers to protect south Louisiana from flooding.

Funded by Terrebonne Parish, Terrebonne Levee and Conservation District and the state of Louisiana, this $35 million flood control structure provides approximately 1,025 linear ft. of flood protection for the Parish.

The floodgate is named in memory of Jimmy Dagate, who served as the first attorney of the Terrebonne Levee and Conservation District. He died at age 60 in 2015.

The structure was first used in July 2019 in preparation for Hurricane Barry, and it prevented approximately 7 ft. of storm surge from devastating the Dularge community, according to the Terrebonne Levee and Conservation District.

The EIC awards program, hosted by Associated Builders and Contractors (ABC), is the construction industry's leading competition that honors general and specialty contractors for innovative and high-quality building projects. The winning enterprises, selected from entries across the nation, were judged on complexity, attractiveness, unique challenges overcame, completion time, workmanship, innovation, safety and cost.

The Eagle Award honors all construction team members, including the contractor, owner, architect and engineer.

"The craftsmanship of Sealevel Construction and their hardworking employees continues to raise the bar when it comes to how we define excellence in construction," said 2020 ABC National Chair Tim Keating, owner and president of R.C. Stevens Construction Co., in Winter Garden, Fla. "It's an honor to recognize these award winners for their respective commitments to build safely, on time and on budget, as well as contribute to the communities in which they work."

Sealevel has the contracts for Phases I and II of the Bayou Chene project, designed to prevent back-flooding from the Atchafalaya River during high water. The phases consist of a flood gate and a barge, which is to be constructed in Amelia and which will be swung into place in the gate to block flooding.

Sealevel Construction is a locally owned heavy civil construction company founded in Thibodaux in 1997. The company has 180 employees for the industrial, municipal and oil and gas markets in Louisiana, Texas, Mississippi and beyond.