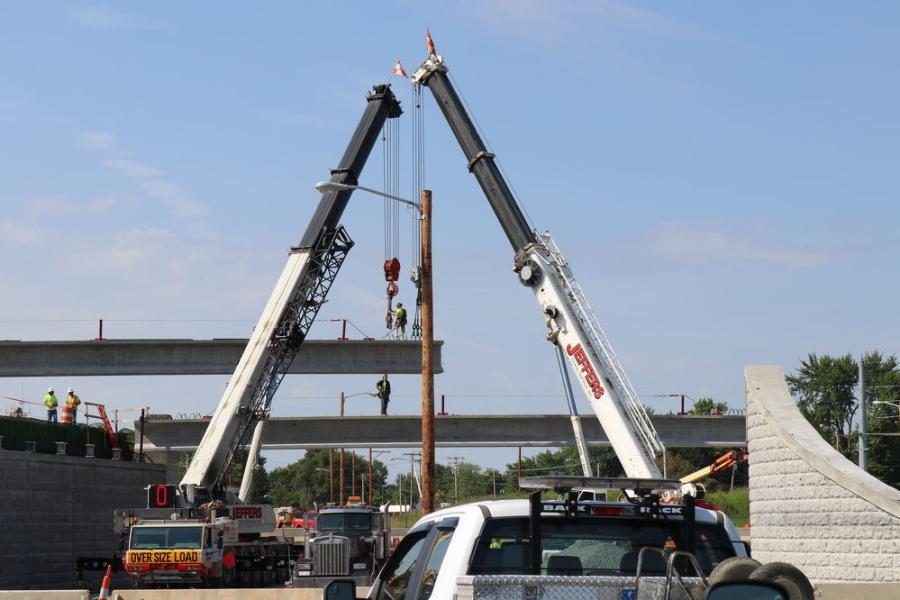 The entire interchange is being redesigned, save for one ramp. Only two remaining structures need to be reconstructed at this point. (Ohio Department of Transportation photo)

Beaver Excavating Company is scheduled to deliver the Ohio Department of Transportation's (ODOT) $114 million Interstate 75 Widening and Reconstruction project in Hancock County through the city of Findlay this year.

The project is rebuilding 5.5 mi. of I-75; adding a third lane in each direction; and reconstructing the interchange between U.S. 68/state Route 15 and Interstate 75 (Lima Avenue) and upgrading the roadway to modern highway standards.

The project started in March 2017 — see story "First Year of ODOT's I-75 Reconstruction Comes to a Close" — and since then, serious progress has been made and with less than one year to go, crews are pushing hard to meet the deadline.

The northern portion of I-75 has been rebuilt and the acceptance will be for 3.5 mi. 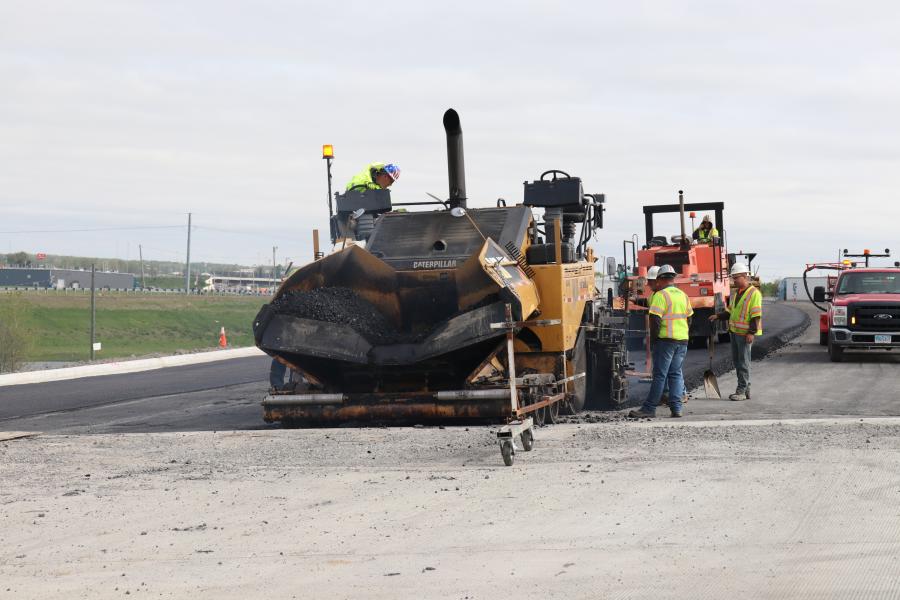 The dogbone design round-a-bout interchange Lima Avenue is open with the new bridge and five of the eight directional ramps finished.

Crews finished the left side of the bridge over the Norfolk Southern railroad last fall, which allowed ODOT to switch all of I-75 traffic onto the southbound lanes for contra-flow.

"In doing so, that will allow us to close the northbound lanes to finish the last two structures of the job — the right side of the railway bridge and a bridge to carry U.S. 68/state Route 15 traffic to I-75 southbound," said Ryan Bair, project engineer of ODOT District 1, Lima. "We have a brand new structure that we have not touched yet, and there's the right side of the railway bridge, due to phasing, that has to be finished."

Other benchmarks that have been met include the completion of a service road for properties along Lima Avenue; the Harrison Street Overhead infrastructure over I-75; and the Blanchard Bridge.

Bair was assigned to the project last July, and pointed out that the construction of the Lima Avenue Bridge at the interchange was a challenge because it had multiple crown points and different grade brakes on the structure itself as opposed to a more traditional one crown point structure.

"There were two crown points and a valley where the median barrier wall will be poured — it was a challenge for them to set up and be poured," he said, noting that the cost of the project increased from the original $113.2 million price tag and May 2020 completion date. "We're on schedule and considering the weather they had last spring and fall, they've done pretty well. Thankfully, the Lima Avenue bridge was part of the round-about design because, through phasing and traffic switches, we were able to close the whole new mainline alignment down and the construction was done without having to maintain traffic on that portion. It also made it easier to set beams at night on the left half of rail bridge." 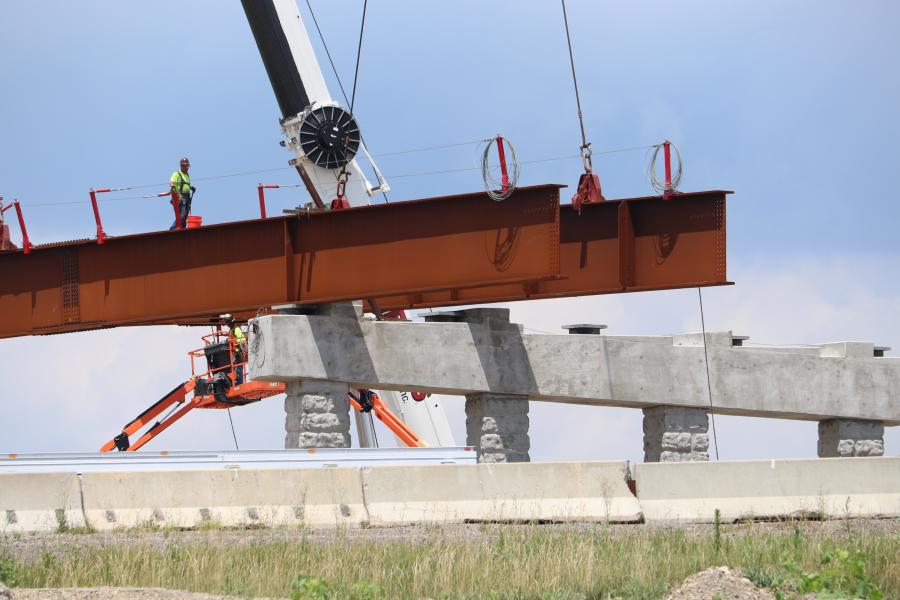 The right half of the existing Lima Avenue bridge was demolished and rebuilt first. Work on the railway bridge was coordinated with the Norfolk Southern railways, and a flagger was on site daily to help with traffic control.

"The majority of their train traffic was at night," said Bair. "The railways have been pretty good to work with and the periods when we had to stop production at night were maybe 30 minutes. It went smoothly. This work also was affected by Lima Avenue structure butts that went up to the Findlay airport, and we had to make sure we were in clearance and tolerance of the air restrictions on that structure."

False decking was essential for the bridge construction, most of which were two lanes in each direction with shoulders and median wall. Several bridges for the directional ramps were single lane structures with wide shoulders.

Most of the bridge and road construction is being conducted via day shifts, with night shifts mainly done for beam settings and deck pours, which also required lane closures.

"Phasing and MOT changes have probably been the biggest hurdle — just trying to get everything completed on one side so you would be ready to switch traffic onto the next phase," said Bair. "If we could have closed everything down and built from scratch, it would have been far simpler and much more efficient. Due to the interchange, we were unable to do that as we had to maintain access to all state and U.S. routes along I-75."

For the remaining I-75 reconstruction, the plan is to only have 0.5 mi. left to replace by spring. The northbound and southbound lanes are separated by a barrier wall.

Most of the excavation for the remaining 2 mi. of mainline I-75 has been completed.

"Once we get the traffic switched to the southbound lanes, we can start with the bridge demolitions," said Bair. "Eighty percent of the roadway embankment has been completed. The excavation was done on the flat sections. A subcontractor was brought in to mill all the existing asphalt and once it was down to the original concrete pavement, they brought in a concrete pulverizer to rubbilize it. A large excavator placed the debris onto articulated dumped trucks which hauled it away."

Some of the concrete was recycled for the larger fills, and the remainder sent to recycling centers.

All of I-75 mainline will have an aggregate base, with an asphalt pavement build-up. There will be concrete pavement for some of the directional ramp areas near the round-about. 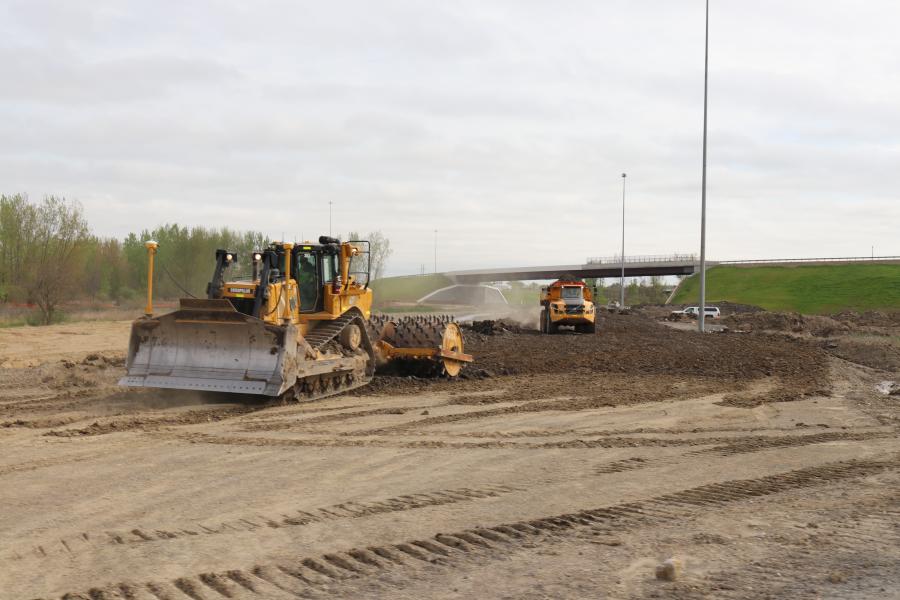 "We've had to do quite a bit of it — box culverts, culverts and plastic and concrete pipe installations," said Bair. "We've had to do numerous waterline and storm sewer upgrades At the Lima Avenue interchange, the city requested an additional waterline upgrade — they wanted to increase the size for a potential project at the airport. We try to get these aspects completed prior to placing the aggregate base so that we're not disturbing any of the new pavement.

"Beaver has its own drainage crew and they've done about 75 percent of it," he added. "This has benefitted work as they've been able to coordinate all the drainage, roadway and structural components without having to rely on subcontractors."

The entire interchange is being redesigned, save for one ramp. Only two remaining structures need to be reconstructed at this point.

To coordinate the work and traffic switches and lane closures, daily and weekly meetings are held between Beaver and ODOT.

"Beaver also prepares a monthly updated schedule with us and it is reviewed so that everyone is up-to-date and we know where we're gaining and losing ground," said Bair.

When the project is delivered, the drive on I-75 will be smoother and the third lane will improve traffic flow.

"The directional ramps going from the interchange to I-75 will improve traffic flow and efficiency," said Bair. "Sections of the original traffic pattern had motorists fighting traffic to get in and out of the ramps. The new ramps will designate a lane and eliminate the conflicts. The Lima Avenue portion will separate the interchange traffic by having it stay up top going across the structure, and no longer require local Lima traffic to cross it."

A key lesson learned for the ODOT staff was the need for good communications, not only with the general contractor, but with the public.

"Keeping everyone up-to-date on the changes, MOT phasing, and trying to minimize congestion points while making changes," said Bair. "Scheduling and keeping everybody on track also is important — it's knowing what needs to be done and when and where the resources need to be directed. This has been a challenge for Beaver given the weather changes and unforeseen events that occur on the job."

Ben Geletka, Beaver Excavating's project manager, appreciated the efforts of the crews and those of the subcontractors. 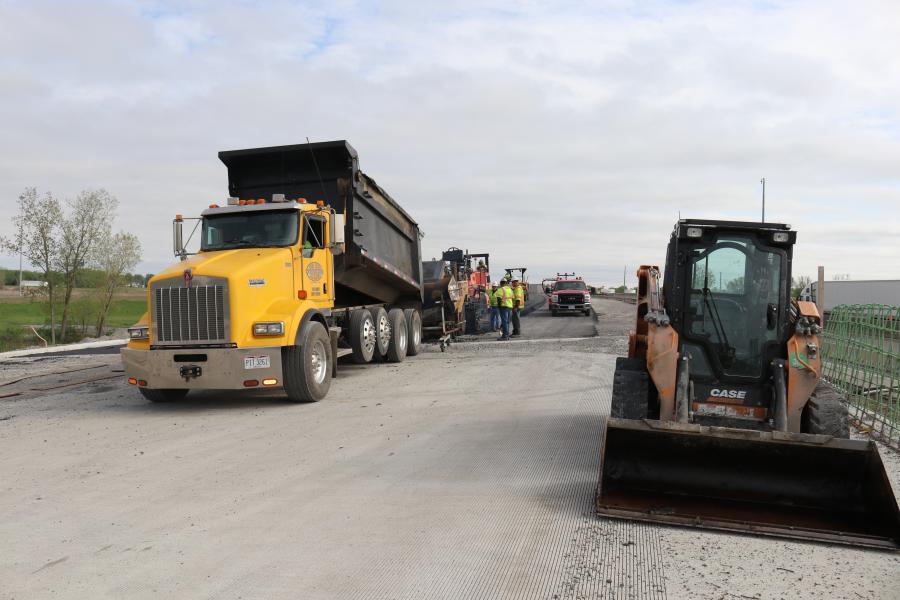 "Without the men and women that come to work day in and day out, this project would not be possible," he said. "Their skills and experience make sure the work is complete and to the quality expected by ODOT. Since the beginning of the project, weather has been the biggest obstacle. The extended periods of rainfall have presented additional challenges to a complex $114 million project. The wet weather has shortened the timeframe on constructing embankment fills for the proposed bridge structures on the project. This has forced our men and women to work more efficiently in a shortened period."

Materials removed through excavation and demolition and new materials being brought in are still being tabulated, although roughly 1 million cu. yds. of embankment will be placed.

Peak days have seen more than 100 Beaver and subcontractor personnel. The subcontractors include Shelly Company for asphalt paving; Cem-Base for soil stabilization; Lake Erie Cos. for highway signage and guardrail; Miller Cable for highway lighting and electrical; A&A Safety MOT items and pavement markings; Foundation Steel for rebar installation; Youngstown Bridge for steel and concrete beam erection; Oglesby Construction for concrete median wall; and Smith Paving and Excavating for concrete flatwork and curb/gutter. Shelly & Sands performed the concrete paving and full construction of the northern portion of the project, including all noise walls.

Heavy construction equipment continues to be employed throughout the project, including pieces from Cat, Case and Komatsu. The Cat equipment includes dozers, backhoes, rollers and pavers. Komatsu pieces included a large excavator and for Case, a mini-dozer. A variety of dump truck and articulated truck have played crucial roles.

To maintain the equipment fleet on site, Beaver Excavating has a full-time third-party mechanic. CEG