Beck and Bellucci Leads Way on Bridge Work in Peterborough

The replacement of the Main Street Bridge in Peterborough, N.H., is the main element of a construction project that started this summer and also includes work on Route 202, which intersects with Main Street.

The replacement of the Main Street Bridge in Peterborough, N.H., is the main element of a construction project that started this summer and also includes work on Route 202, which intersects with Main Street.

Aaron Lachance, a project manager and structural engineer of Hoyle, Tanner and Associates, Manchester, N.H., the design firm on the job, said, "It's five projects rolled into one," with the bridge replacement joining a list that also includes structural work on Route 202.

Chris Schroeder, engineer/estimator of Beck and Bellucci, Franklin, N.H., the lead contractor on the job, said, "The scope of the work is to demolish and replace the existing concrete rigid frame arch bridge on Main Street and replace the decorative masonry stones salvaged from the existing bridge on the new bridge.

"We will rehabilitate several hundred feet of existing stone retaining wall along Route 202 injecting grout to stabilize existing dry-laid boulder masonry," he added. "We will replace 175 feet of existing stone retaining wall with a new ‘King Pile' wall system. The King Pile wall consists of drilled shafts with embedded vertical beams, with sheet piles spanning between the beams. We will also realign Route 202 near the Main Street intersection."

As for the sequence of construction events in the project, Schroder said, "We are currently installing temporary retaining walls to allow for construction of an access road at the existing Route 202 retaining wall and beginning demolition of the concrete bridge. We are also removing the existing bridge masonry, with stones being labeled and stored for re-use on the new structure. This fall and winter we will complete demolition of the bridge and construct new concrete footings and the king pile wall should also be installed. In spring 2021 we will install EFCO concrete formwork, place the arch superstructure and begin rehab work on the Route 202 retaining wall. By fall 2021 we should be complete with the new bridge and retaining wall work and the new bridge will open by spring 2022." 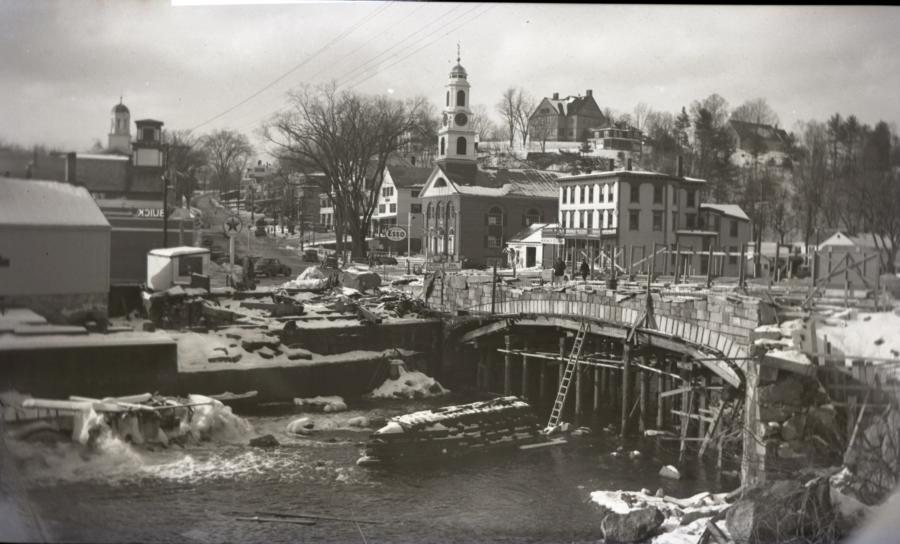 The Main Street Bridge over the Contoocook River in the center of Peterborough is a 75-ft.-long rigid frame structure that was constructed in 1940 to replace a two-span structure that was lost to flooding during the hurricane of 1938. It is one of the state's red-list bridges, which means it has one or more major structural elements in poor condition.

Improvements to the current bridge were planned to address the deteriorating condition of the bridge with a rigid frame that shows evidence of heavy leakage, minor to moderate cracking in the frame and a surface cracked with random potholes.

The goal according to a NHDOT report "is to provide a low maintenance bridge that meets NHDOT requirements while minimizing cost and construction duration."

Beck and Bellucci won the job with a low bid.

The existing Main Street Bridge will be replaced with a cast-in-place concrete frame bridge on spread cast-in-place concrete footings, according to the NHDOT report. The replacement bridge will be wider, measuring 47 ft., 7 in. to allow for the widening of traffic lanes to improve vehicle movement and safety over the bridge and through the Main Street/Route 202 intersection. The lane widths of the bridge of 10 ft., 10 ft. and 10 ft. will be replaced by widths of 12 ft., 7.5 in., 11 ft. and 10 ft., 7.5 in. from the north side of the bridge to the south. 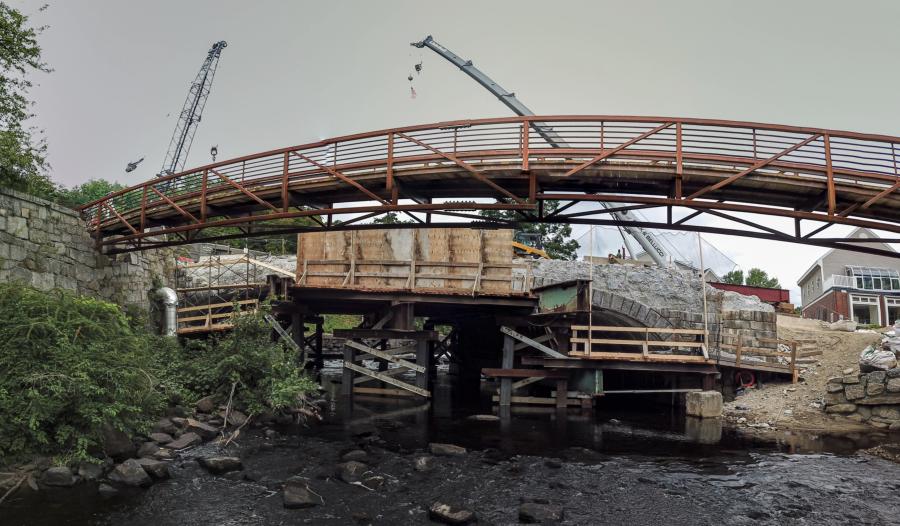 The budget for the job is $14.7 million, with the state paying for 80 percent and the town 20 percent. Ninety percent of the state's share is paid by the Federal Highway Administration and the Municipal Off-System Bridge Rehabilitation and Rehabilitation Program. In January, Peterborough residents voted to approve an additional $1.4 million for bridge repair.

The Main Street Bridge was closed to traffic on April 13 and will not reopen until the project is complete. CEG