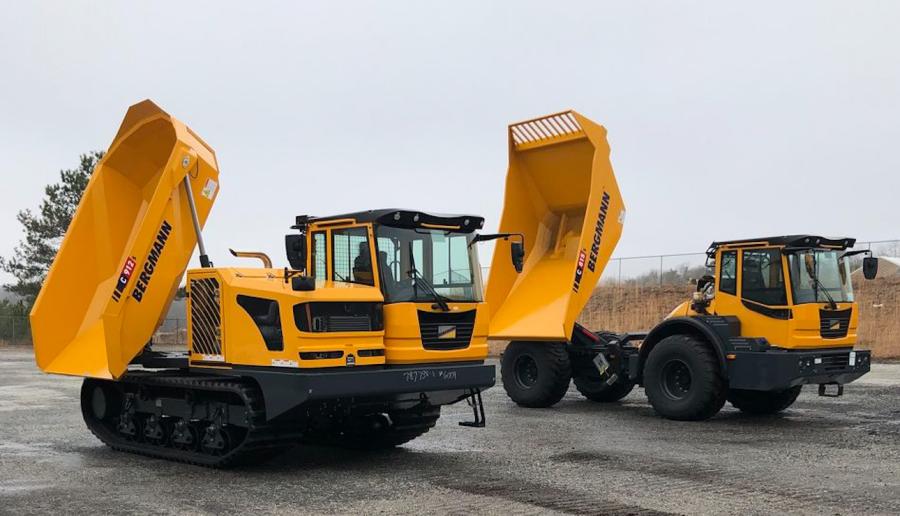 The Bergmann Americas C912s track dumper offers dumping in both swivel and dump with 180 degrees. The 815s model is available as a rear, round or three-way tipper.

A few years ago, a trio of veterans in the construction equipment industry came together with the goal of finding and marketing a unique product line that was not being widely offered in North America.

They were looking for a line of relatively small machines to work on construction job sites alongside more conventional equipment, but with the skill to get into places where the big machines could not.

Their search ended when they found Bergmann Maschinenbau GmbH & Co. KG, a German manufacturer of wheel- and track dumpers under 20 tons that had very little market presence on this continent.

Within two years, though, Kevin O'Donnell, Tom Hartman and Sterling Roberts had negotiated a partnership with Bergmann to market and sell the latter's complete line of site dumpers in the United States, Canada and Mexico.

In early 2020, they officially launched Bergmann Americas Inc. in Spartanburg, S.C., and quickly began developing a network that today numbers 18 dealers covering 35 states. The manufacturer's product line in the United States quickly grew in popularity, borne out by the fact that approximately 170 units sold in the first two years, noted O'Donnell, president of Bergmann Americas.

Bergmann products have quickly found favor with contractors and operators because of their size and ability to deftly move large payloads. Owners of the machines also like the trucks' versatility and maneuverability.

O'Donnell credits Bergmann America's success to its drive and conviction, in addition to the strength of its dealer network, and the precision workmanship employed by the German factory.

Although Bergmann Americas had an inventory of machines ready for delivery in early 2020 as O'Donnell and his partners began lining up distributors, they wanted to first make sure they had plenty of parts on warehouse shelves to support their dealers.

Huntersville, N.C.-based Ascendum Machinery was the first construction equipment dealer to sign with Bergmann Americas in February 2020, but O'Donnell explained, "We would not release those machines to Ascendum until we had parts because in product support, you get one shot at making a good impression, especially with a brand-new product coming to the states. We did not want any hiccups."

Since then, despite Bergmann Americas' opening for business just before COVID hit, O'Donnell said that the factory has been able to satisfy all their equipment demands, and Bergmann Americas has yet to miss a shipment.

The manufacturer exports seven different models to Bergmann America, noted Hartman, the company's vice president of sales and marketing. In addition, Bergmann Maschinenbau is the only maker that produces both types of dumpers: a compact articulated truck and a track machine.

Bergmann's lone track machine, the C912s, is a 12-ton unit available in two dumping configurations: a rear-tip and a swivel-tip.

The rest of its models are of the rubber-tire variety, including an electric model set to debut in 2022.

"We produce a 15-ton, low-ground-pressure compact articulated truck, the C815s model, in four different versions: a rear dump, a swivel dump, a three-way dump, and, in 2021, we introduced a 3,000-gal. water truck, with the tank mounted on the C815s chassis," Hartman said.

Because of its capabilities, O'Donnell believes the C815s three-way dumper to be among Bergmann America's most versatile offerings and has proved to be perfect for use in road construction.

"You can set the hinge point to dump to the left, to the right or to the back," he said, "and from the operator's cabin, you can rotate the controls 180 degrees. For instance, if you are driving the truck forward, and you get to where you need to rotate it, you can hit a switch on the seat, turn your entire control to face the rear, make the dump, and drive it straight out in that configuration, thereby powering it in and out without turning the machine itself." 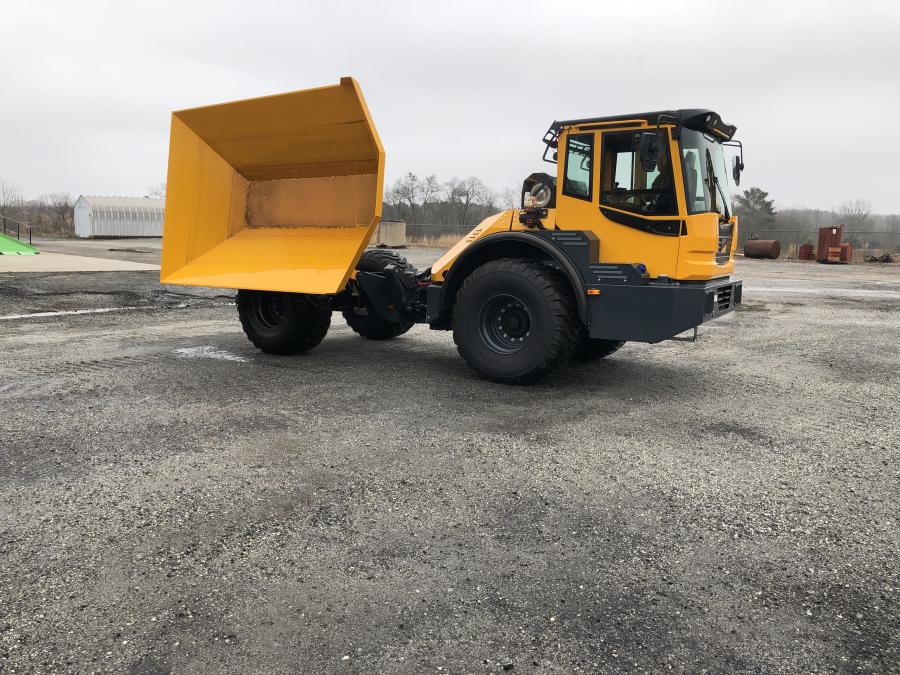 Hartmann, too, is a big fan of the accomplished 15-ton truck, especially the C815s rear tip, which offers the lowest ground pressure in the Bergmann Truck line and is close to the ground pressures of a track dumper, he said. Bergmann Americas also began offering site dumpers to the U.S. market — a lineup that includes 10-ton, 7-ton and 5-ton capacity dumpers.

Of the two types of machines marketed by Bergmann Americas, though, Hartman said the rubber-tire trucks have been the bigger sellers. Among other jobs, they deftly perform their duties in a wide variety of applications, like beach renourishment projects and stream remediation, projects where the ground is soft.

"When we talk about tight conditions, most people think of an urban area where job sites are often smaller, and with our wheeled dumpers we have a truck that is much more agile and a little quicker in those conditions," he said. "Tighter spaces can also be found where you are working on slopes because you do not have the room to turn around easily, or on a cloverleaf at an interstate project."

In the research O'Donnell and his partners conducted prior to setting up a North American operation for Bergmann, they found that when a customer has a need for something smaller than a 30- or 25-ton truck, the first thing they ask for from most dealers is a track machine — knowing, of course, that that equipment exists.

"But a lot of the same applications that the bigger trucks handle can be done with our compact articulated trucks because you are dealing with hard ground," he said. "If you can get [customers] into the rubber-tire truck, they are going to be moving more material faster and at a lower operating cost, which is a win-win for the contractor."

Likewise, making the Bergmann C912s track dumper available for contractors and operators, he said, "also gives us the added flexibility to say, ‘Hey, if you are working on steep slopes, short hauls or soft conditions, that machine is also ideal to use.' It is just another way to move material more efficiently on some job sites.

According to Hartman, later this year Bergmann Americas will begin marketing the model 804e truck, a four-ton electric rubber-tire dumper powered by a lithium iron phosphate (LFP) battery with a total capacity of 24 kilowatt hours. The new machine can be recharged using a standard domestic socket outlet, a quick charging station, or via three-phase industrial power.

Bergmann Maschinenbau is a family company that started 62 years ago in the Emsland region of Germany. From the district's capital city of Meppen, the equipment maker began producing the Baufix, a 2-ton dumper, in 1962, according to O'Donnell.

"The ground conditions [in that region of Germany] were often bad in places due to a lot of peat moss, with a seam about 18- to 25-feet deep," he said. "Bergmann had to build these low-ground pressure machines to get through it. After site dumpers, it later moved into manufacturing dump trucks and track machines."

The story of how Bergmann expanded its operations to the North American market is one of perseverance on the part of Hartman, Roberts and O'Donnell.

"Tom and Sterling found Bergmann by looking online for a certain machine, and after they saw a truck with a track machine on it, they thought that would be a great way to go for us," said O'Donnell. "They contacted Bergmann, but the Germans said they couldn't do anything at the time because they were building a new manufacturing facility. Later, once that plant was up and running, we contacted them again, and they said they were then ready to meet the needs of the U.S. market. Shortly after that, we put together a deal as their North American distributor."

One of the virtues about Bergmann Maschinenbau that fueled the Americans' excitement about becoming involved with the manufacturer was the level of artisanship and detail the German company put into its products. 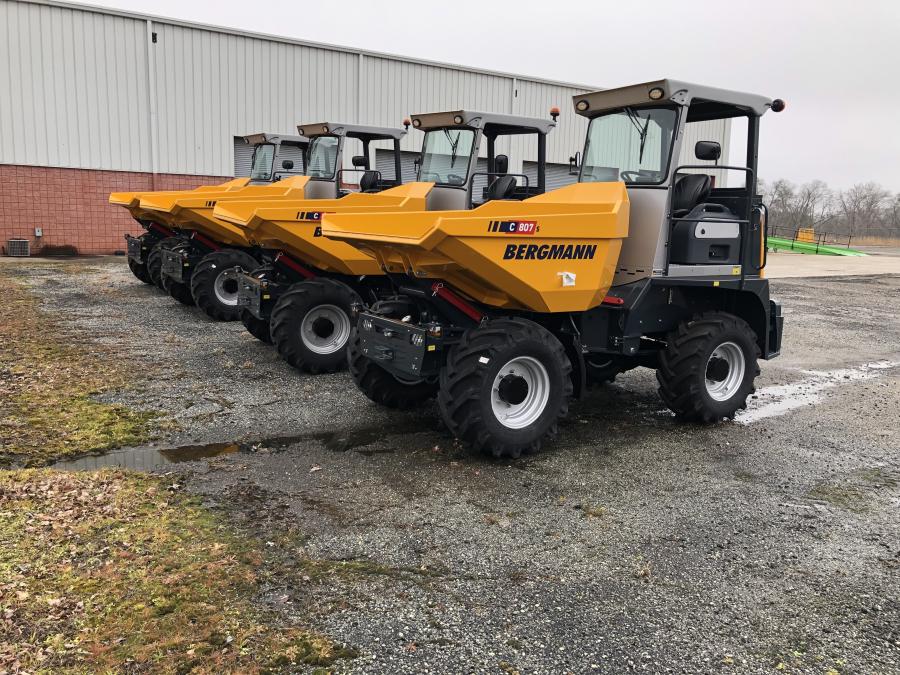 Bergmann Americas Inc. and Bergmann Maschinenbau each believe in offering the best in product support. As vice president in charge of that aspect of the Bergmann Americas, Roberts has assembled a tremendous team to support the machines in the North American market with first-rate service and parts availability.

To illustrate that, O'Donnell said Bergmann's trucks are powder-coated, and their hoses are individually wrapped.

"We have had people come by when we were at ConExpo-Con/AGG telling us, ‘You can't do that. It adds to much expense to the machine.' We feel, though, it adds quality to the machine, and that is well noted when people are looking at them," he countered. "The fit and finish is fantastic, but more importantly, I think that it is part of the professionalism and the communications we have directly with the German factory. We are on the phone with them twice a week — once on Tuesdays for service meetings, and on Thursdays we talk with production and upper management."

O'Donnell added that when Bergmann Americas finds issues with machines that it feels would make sense to modify, the German maker is always willing to listen and make the needed changes.

A good example of that productive back-and-forth across the Atlantic Ocean came when Hans-Hermann Bergmann, president of Bergmann Maschinenbau, approached Roberts at ConExpo to ask him if he had any dislikes about the current crop of its site dumpers.

"Sterling pointed to some Allen key screws that are above the battery box on the track machine and said, ‘These screws have got to go. Material is going to get overloaded from the back, getting them filled with dirt and sand, and we will have to drill that out. Just take the hex heads and put them right there,"‘ O'Donnell remembered. "Mr. Bergmann immediately picked up the phone, called the factory, and that change was made for all units coming to the U.S.

"Little things like that add up, to our way of thinking, and have contributed to the respect we have for Bergmann," O'Donnell added. "We fully understand that if they are going to do the little things right, the big things will be done right as well."