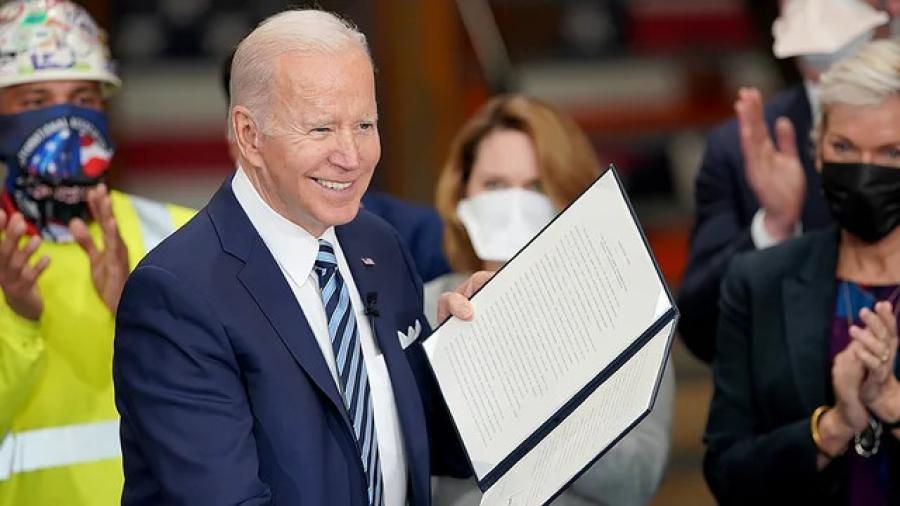 The agreements set standards for wages and other conditions with a labor organization prior to a project. Biden touted the move to reduce costs and improve efficiency, although some have argued that PLAs increase costs, Fox Business reported.

The president's order came as part of a broader pledge to help unions.

"The executive order I'm going to sign today is going to help ensure that we build a better America, we build it right, and we build it on time, and we build it cheaper than it would have been otherwise," Biden said in his remarks to the Ironworkers Local 5 union members in Upper Marlboro, Md., according to The Hill.

Biden added that the collective bargaining deals are aimed to "help defuse problems before they arise."

"I promised you [that] you'd have a union president, and I am," Biden said in the speech.

The order applies to projects more than $35 million and, according to the White House, could affect $262 billion in federal contracting. It requires projects to involve an agreement with one or more labor organizations while allowing all contractors and subcontractors to compete regardless of whether they are parties to collective bargaining agreements.

Following Biden's announcement, the Associated General Contractors of America (AGC) on Feb. 4 warned that the executive order would inflate costs.

"Government-mandated project labor agreements undermine the collective bargaining process by imposing a separate agreement in a specific region that applies only to a limited number of construction firms and unions," read an AGC press release.

"These imposed PLAs undercut the benefits of the collective bargaining agreements that were negotiated in good faith between employers and labor unions and will likely prompt many firms to think twice about participating in the bargaining process in the future."

"Such agreements avoid labor-related disruptions on projects by using dispute-resolution processes to resolve worksite disputes and by prohibiting work stoppages, including strikes and lockouts," read the White House press release. "They secure the commitment of all stakeholders on a construction site that the project will proceed efficiently without unnecessary interruptions.

"They also advance the interests of project owners, contractors and subcontractors, including small businesses. For these reasons, owners and contractors in both the public and private sector routinely use [PLAs], thereby reducing uncertainties in large-scale construction projects. The use of [PLAs] is fully consistent with the promotion of small business interests."

The Hill reported that Biden's executive order also directs both the federal Department of Labor and the Office of Management and Budget to lead a training strategy for the nearly 40,000-person contracting workforce on the implementation of the new policy.

The president has promised that the bipartisan infrastructure law, which he signed in November to provide funding in part for construction projects, also would create good union jobs.

"As president of the United States, I award contracts," he explained. "Unless the project I'm purchasing for the American people was made in America and [all] its component parts were made in America, we're not buying it. Every single project that we're talking about is paid for with federal dollars, is a federal project, is going to be [built with] union jobs."

Biden's executive order builds on one issued by former President Obama in 2009 to use project labor agreements for federal construction projects.

The current president told the Maryland iron workers that his new executive order will "ensure that major projects are handled by well-trained, well-prepared, highly skilled workers."