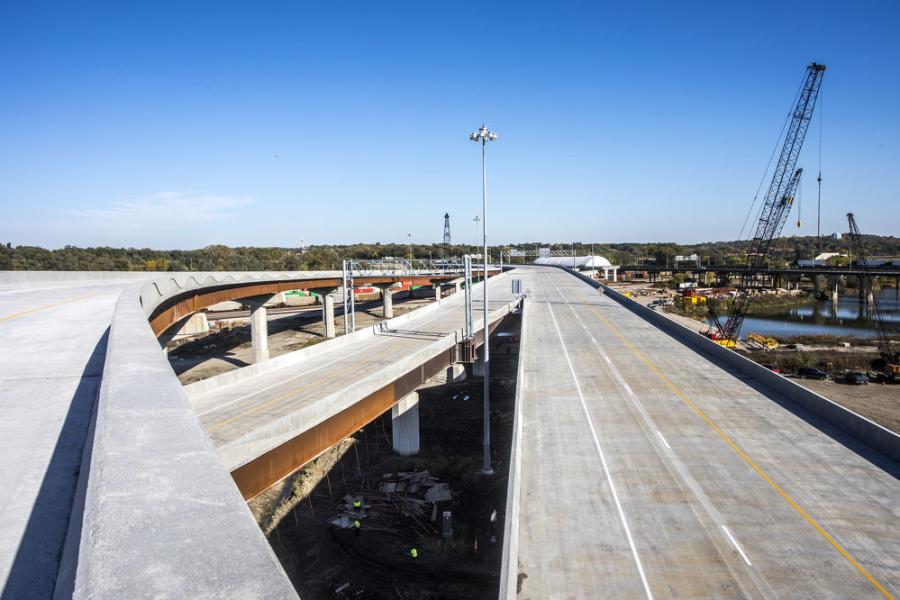 “During the Tier 1 evaluation of highway design alternatives, it was determined that a dual, divided freeway should be constructed along the 3-mile overlapping section of I-80 /I-29 between the west system interchange and the east system interchange,” said Scott Schram, P.E., Iowa DOT, District 4 engineer. (Iowa DOT photo)

Construction teams in Iowa continue making progress on a dual, divided freeway that will separate through-traffic on I-80 from motorists traveling on I-29, destined for Council Bluffs.

The project, which creates I-80 express lanes and I-80/I-29 local lanes, was designed to keep motorists moving during lane closures, maintenance and other interruptions. 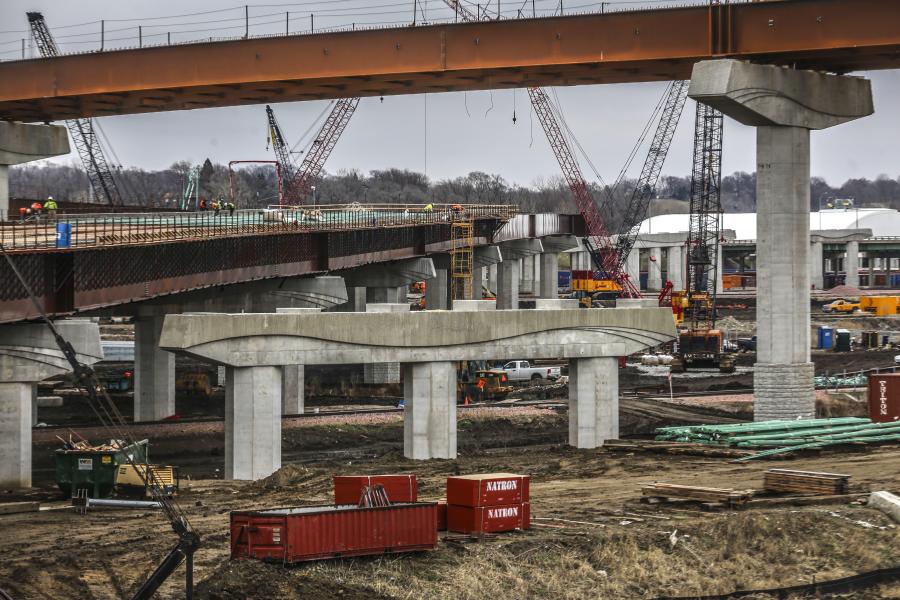 “During the Tier 1 evaluation of highway design alternatives, it was determined that a dual, divided freeway should be constructed along the 3-mile overlapping section of I-80 /I-29 between the west system interchange and the east system interchange,” said Scott Schram, P.E., Iowa DOT, District 4 engineer. “This area represented a large volume of traffic projected to exceed over 100,000 vehicles per day. The volume of traffic at this location caused delays and crashes due to weaving traffic trying to make exits, some of which were left-hand exits, which does not meet driver expectations.”

The dual, divided freeway physically separates through-traffic on I-80 from motorists on I-29 who are headed to Council Bluffs, creating I-80 express lanes and I-80/I-29 local lanes. There will be a concrete median dividing each of the four sections of highway. There will be three I-80 express lanes in each direction and three lanes, plus auxiliary lanes, in each direction for I-29/I-80 local. The dual, divided freeway will have six 12-ft. lanes east bound and six 12-ft. lanes west bound.

Twelve-ft. shoulders are included to allow officials to shift traffic, in the event of an incident or future maintenance and construction activities. The dual, divided freeway also enables a traffic shift to one system or the other in case of an accident, to help keep drivers moving through the area.

Based on 2016 traffic data, roughly 76,000 vehicles per day travel through the Council Bluffs interstate system, with trucks accounting for 11 to 25 percent. The ongoing construction is expected to have a tremendous impact on drivers.

Schram said the new freeway will offer greater flexibility to travelers, and will improve the overall efficiency of the transportation network.

“For example, it allows traffic to keep moving in both directions of the highway, even if lanes are closed because of a crash or maintenance,” said Schram. “The dual, divided freeway permits through-traffic to utilize both the express and local lanes, offering more lanes overall to travelers. Currently, the weaving of through-traffic and local traffic using the on and off ramps creates congestion, especially during peak traffic hours. The dual, divided freeway separates through- traffic from local traffic, eliminating this source of delay.”

“There was an interim project in the late 1990s adding an additional lane to the inside in both directions to help with capacity problems,” said Schram. “The interstates were due to be reconstructed, and this time allowed us to look at the transportation network as a whole. Just as the interstate did not function like it did in the 1960s, the railroads do not function like they did in the 1800s. Working with the railroads and the Corps of Engineers, along with the city of Council Bluffs, we are able to improve the transportation network for years to come that will handle added capacity, fix geometrical issues from the existing system and provide a safer system for motorists and freight.”

Schram said the work ties into the broader Council Bluffs Interstate Improvement Program. The Council Bluffs interstate system was developed to the design standards from decades ago. Although routine maintenance projects were completed in the 1980s and 1990s, significant changes have not been made since its original construction.

“The Council Bluffs Interstate System Improvement Program is a comprehensive interstate redesign that will modernize the highway system, and improve mobility and safety of approximately 18 miles of interstate. The dual, divided freeway accounts for approximately three miles of the interstate reconstruction, and is the first one in the state of Iowa. It's one of the largest projects currently in the Iowa DOT's five-year Transportation Improvement Program. The program has been implemented in smaller, manageable projects over time. These projects are prioritized by available funding and most significant impacts to traffic management, safety and vehicle capacity.”

The original plan was to divide the Council Bluffs interstate system into five segments. Segmenting allowed easier packaging of projects, and would help Iowa DOT better manage construction activities. Segment 1 is located primarily in Nebraska, along I-80, from just east of the I-80/I-480/US 75 system interchange in Omaha to the Iowa Nebraska border, including the Missouri River bridge and 24th Street interchange. Segment 2 included the east system interchange to the Indian Creek channel. Segment 3 was from the Indian Creek channel west to 9th Avenue on I-29 including the west system interchange. Segment 4 includes the area along I-29 from 9th Avenue north to 25th Street and will provide access to West Broadway, formally U.S. 6, which does not exist today. Segment 5 stretched from Madison Avenue north to U.S. 6. Segment 1 is complete, with segments 2, 3 and 4 under construction.

The two current projects are projected to cost $147 million. The full program requires an estimated $1.5 billion and $2 billion.

“The program relies heavily on federal funding, almost 90 percent comes from federal funds,” said Schram. “Iowa DOT has committed resources to getting it done, and works closely with the Federal Highway Administration (FHWA). FHWA has been a great partner with the Iowa DOT on the projects from being part of our project management team and attending several meetings to providing resources and funding for the project. The phases have been completed on time, and have been able to continue due to the packaging of projects and a schedule that allows us to accelerate projects that will ultimately cost less and have less disruption to motorists.”

Schram noted that feedback on the program has been provided for roughly two decades. 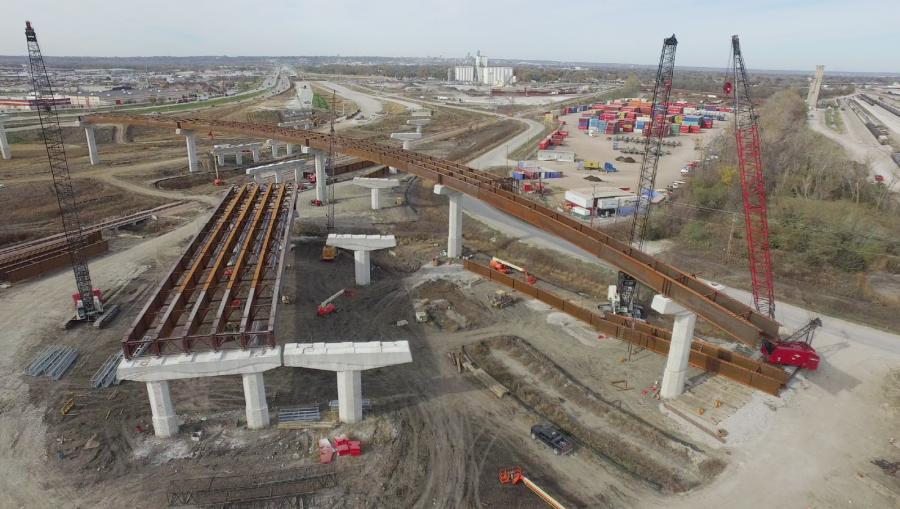 “Iowa DOT has worked closely with the community to develop this plan. Although the dual, divided freeway itself is not open to traffic yet, many have commented on the ongoing construction and future improvements as they've seen things begin to take shape.”

“Iowa DOT committed to maintaining the same number of lanes as travelers were accustomed to during the construction process and has been able to accomplish that through careful pre-planning and forethought about staging,” said Quernemoen. “Projects in the program were prioritized in order to address capacity and safety issues. As projects have been completed, additional capacity has been opened.”

Quernemoen said coordination between adjacent active projects with different contractors has also been a concern; however, careful planning and detailed schedules required from each of the contractors has been extremely beneficial.

Geotechnical issues on the project also had to be addressed.

“The subsoils of the area has been a design and construction challenge from a time and cost viewpoint. Contracting the soil borings and studies earlier in the design phase has improved the time and cost impact as the program has progressed.

“Overall, we're ahead of schedule on the current work,” said Quernemoen. “Ramps in both the west and east system interchanges are under construction that will help tie the two interstate systems together. Paving will be completed for the current dual, divided freeway project, and a traffic shift will occur later this year for that portion of the interstate. The eastbound viaduct work is also kicking off this year in the east system interchange.”

During peak construction periods, there are approximately 150 workers on the various sites. For the most part, work is completed during the day, but at various times, some night work is perform to reduce impact to traffic.

Ever mindful of the nature of the work, crews don't take any chances. Building offline has increased work zone safety.

“When an emergency closure needed to be done, traffic analyses were completed and the district recommended additional ramp and lane closures, thus diverting traffic so that possible crashes could be averted,” he said. “Construction is occurring in a railyard and along rail lines, and good communication has resulted in safe work zones.

“We have utilized intelligent work zone technology equipment such as truck entering systems to alert drivers and queue detection for unplanned congestion occurring.”

The majority of the paving and bridge substructures is complete on one of the two active projects. The second project is just starting, with workers beginning to build bridge substructures over the winter. Tasks yet to be carried include construction related to bridge decks and bridge rail, as well as completion of paving and striping on the current active project in the dual, divided freeway.

Crews expect to execute a traffic shift this summer. With construction just beginning on the other project, the focus is on completing bridges and paving for the east system interchange. One additional project for the dual, divided freeway is yet to be designed and let.

The current job site was the old interstate mainline. Failing pavement was present and has been removed, re-graded and paved. Quernemoen admitted that constructing four separate roadways can be a lot to juggle, but, ultimately, it's worth the effort.

The project is located in a portion of the state with rich farming soils and hills dubbed the Loess Hills area. To mitigate use of this soil for roadways, the state provided an optional borrow site for contractors from which to take fill material. In addition, as existing roadways have been demolished, contractors have crushed the pavement and use it for the base materials for the future roadways, creating less waste.

Quernemoen said that teams have invested a lot of time and detail into project development.

“Contractors are given lane closure restriction times to limit the time that motorists are impacted. For the most part, we have built as much offline as possible to limit the impact to traffic. Iowa DOT also has a public involvement effort to notify the public well in advance of closures and impacts.”

Significant planning has taken place to carry out construction, which has not experienced any significant setbacks due to extreme weather or other conditions.

Construction on the program was approximately 50 percent complete, as of 2017. The westbound viaduct opened in fall 2017. In fall 2019, Iowa DOT will open first half of the dual, divided freeway (I-80 westbound/I-29 northbound). The plan is to complete segments 1 through 4 by 2024.