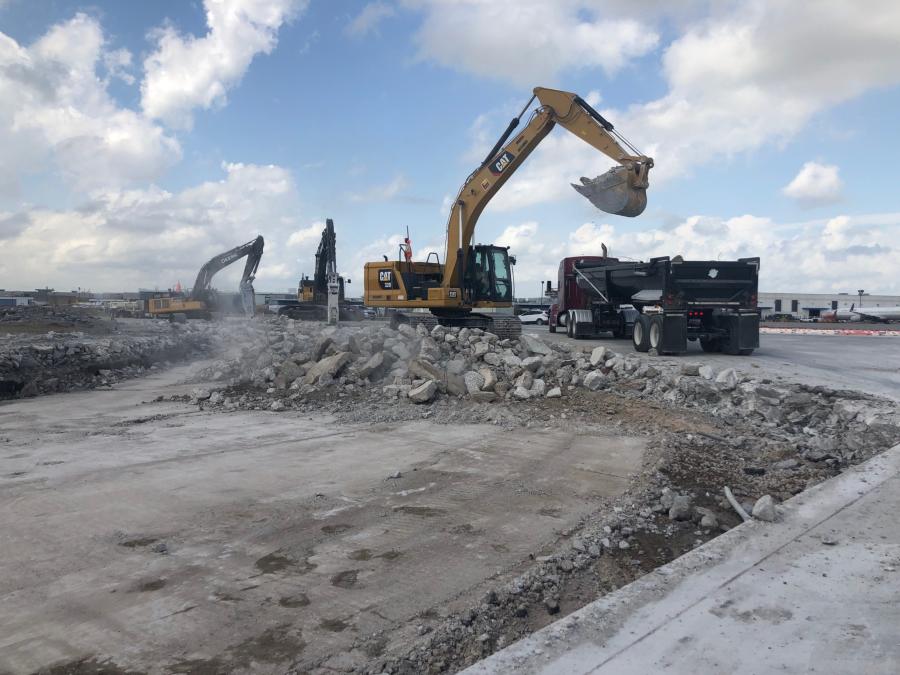 Construction crews are making necessary upgrades to George Bush Intercontinental Airport as part of the IAH Terminal Redevelopment Program (ITRP), the largest capital development program that the city has invested at Bush Airport since it opened in 1969. (Photo courtesy of IAH.)

Construction teams are making significant progress on the $1.3 billion upgrades to George Bush Intercontinental Airport (IAH) in Houston. The IAH Terminal Redevelopment Program (ITRP) is the largest capital development program that the city has invested in the airport since it opened in 1969. 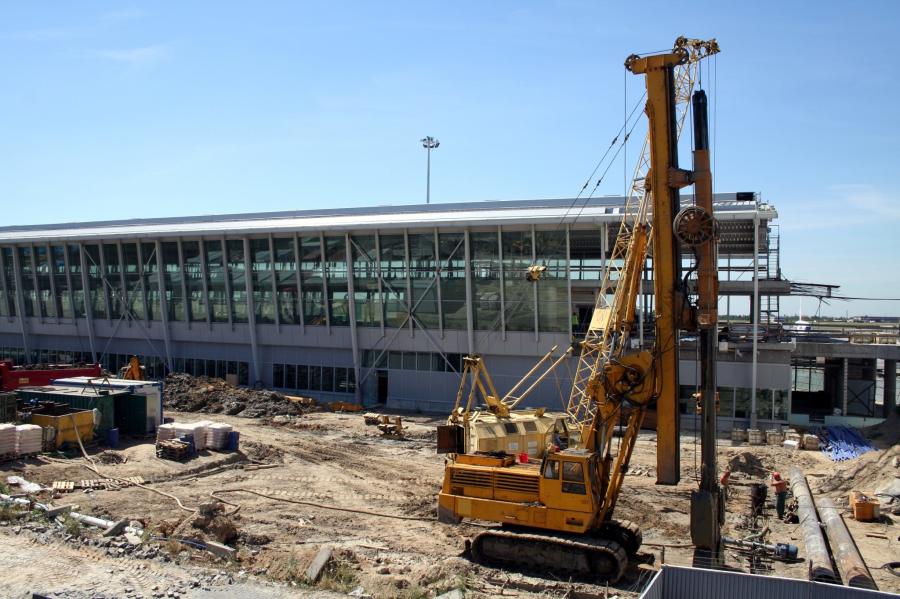 More than 45 million passengers traveled through IAH in 2019, including more than 11 million international passengers. The airport services 27 passenger airlines and has the fifth-most international flights in the US.

The new international terminal complex will welcome 18 foreign airlines and United Airlines' international services. Project planners believe the new development will allow the airport to meet passenger demand and improve the customer experience. Since 1990, IAH passenger traffic has nearly quadrupled. New construction began in 2019 and is expected to be complete in 2024. The project is on schedule.

The planning, design and preconstruction of the upgrades are complete and construction is approximately one-fourth finished.

Steven Andersen, ITRP executive program manager, is overseeing the construction at the airport.

"Our goal is to support Houston Airports' vision to make IAH airport a five-star airport," he said. "This past January, William P. Hobby Airport became the first airport in North America to receive a 5-star designation from the Skytrax ratings organization. We would like to see IAH, currently a 4-star airport, also achieve 5 stars and the success of ITRP is a significant component in making that happen."

Andersen and his team have their eyes on the details while they keep the big picture in mind.

"Houston is the fourth-largest city in the country and serves as a logistics hub," he said. "We want to make sure the airport is keeping up. An airport has an enormous economic impact on a city. We are building capacity for the airport as well as making it possible to have an awesome passenger experience. Construction at the concourse will have new technologies, modern concessions, local artwork and aesthetically pleasing design."

Construction at a large, busy airport is always tricky. It usually begins with demolition of the old before new structures can rise. Construction planners for the redevelopment work very hard to minimize the impact on operations and the busy airport traffic.

The massive project began in 2019 with most of the demolition completed a year later. COVID caused air traffic to decrease and enabled workers to advance the demolition with less interference with airline traffic. 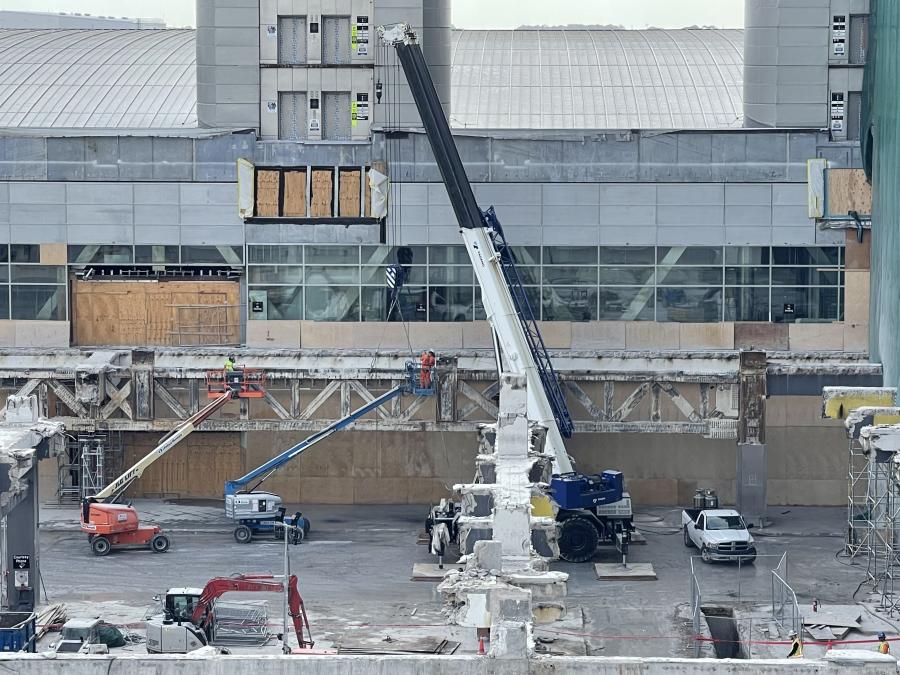 The demolition of Terminal C North will make way for six new widebody aircraft gates that can accommodate larger aircraft that can fly greater distances and bring additional business to the city.

The demolition included leveling the Terminal D/E parking garage. Workers were able to recycle 53,000 tons of concrete and 2,000 tons of metal.

The demolition process required specialized equipment as well as excavators and skid steers to deconstruct the decks and then the rest of the structure piece by piece.

Building the foundation for the new terminal began with identifying utilities and new facilities systems.

"One of our biggest challenges was working in a live operational environment, especially around the fuel systems and ensuring that no debris remained where it could be sucked up into any of the aircraft engines," said Andersen. "One of our prime concerns was to maintain safety for passengers and our workers."

Andersen also has been pleased by the effective collaboration between the 70 contractors working on the project, many of whom compete against each other in other projects.

"We have had great productivity and compiled an excellent safety record," Andersen said.

Workers drilled piles 75-ft. deep for the new foundation. Two types of concrete were required for the project: one for the terminal and a second type for the airfield pavements near the new terminal. 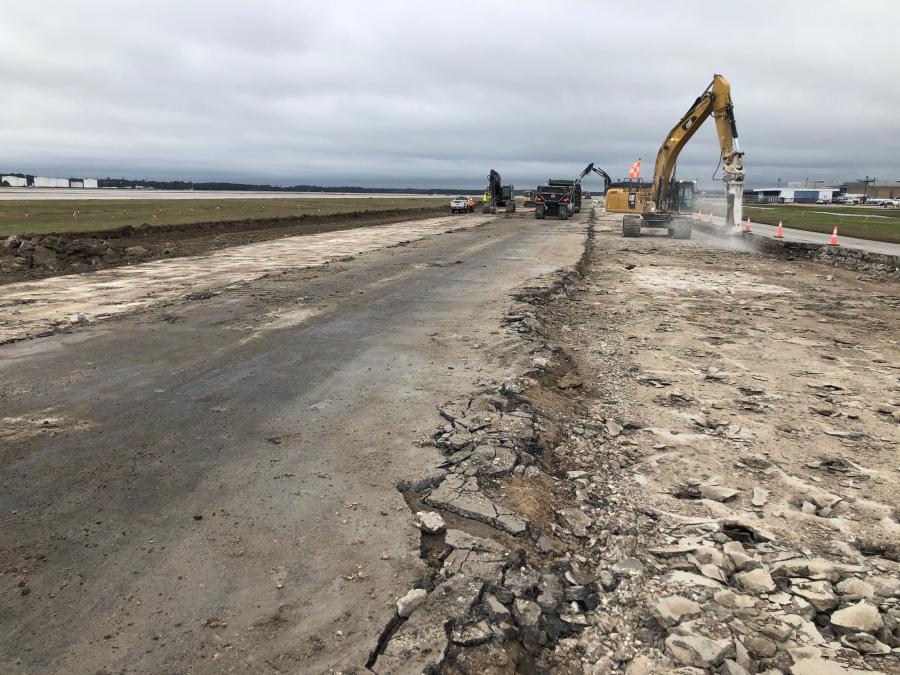 A project of this magnitude and cost has required input from city officials.

"We have had several reviews and updates with the city council and kept the mayor informed of our progress," said Andersen.

The city controller audited the program in 2020 and in 2021. Accounting firm BDO stated, "We found that ITRP appears to run a very tight ship." The firm also stated that ITRP as being in the top 5 percent of programs audited by the large firm.

Many airports are located near water and have been endangered by flooding. IAH, like many facilities, continues to be threatened by the changing weather patterns, specifically flooding. IAH was impacted by the massive flooding caused by Tropical Storm Imelda in 2019. Construction planners have that in mind and have built the new concourse and baggage handling above 100-year and 500-year flood levels. In addition, the new construction focuses on directing the water away from the airport and into the drainage system. Workers also have upgraded drainage channels to capture excess water and direct it into waterways and detention ponds.

"The baggage systems are state-of-the-art," said Andersen. "The sterile corridor walkways are one-of-a-kind structures specifically fabricated in our laydown yards and will be transported on-site for installation."

Jarrett Simmons, chief infrastructure officer, is pleased with the construction progress at the airport.

"Our ITRP team is diligently working to construct and seamlessly blend a new international concourse with our 30-year-old international terminal which will be fully modernized," Simmons said. "From a passenger perspective, the look, feel and experience of the combined building will be very impressive and unlike anything that they have ever seen at a Houston Airport System facility." CEG