Birmingham Project to Tie Industrial Past to Its Present, Future

A project that will tie the city’s industrial past to its present and future is making headlines in Birmingham, Ala. 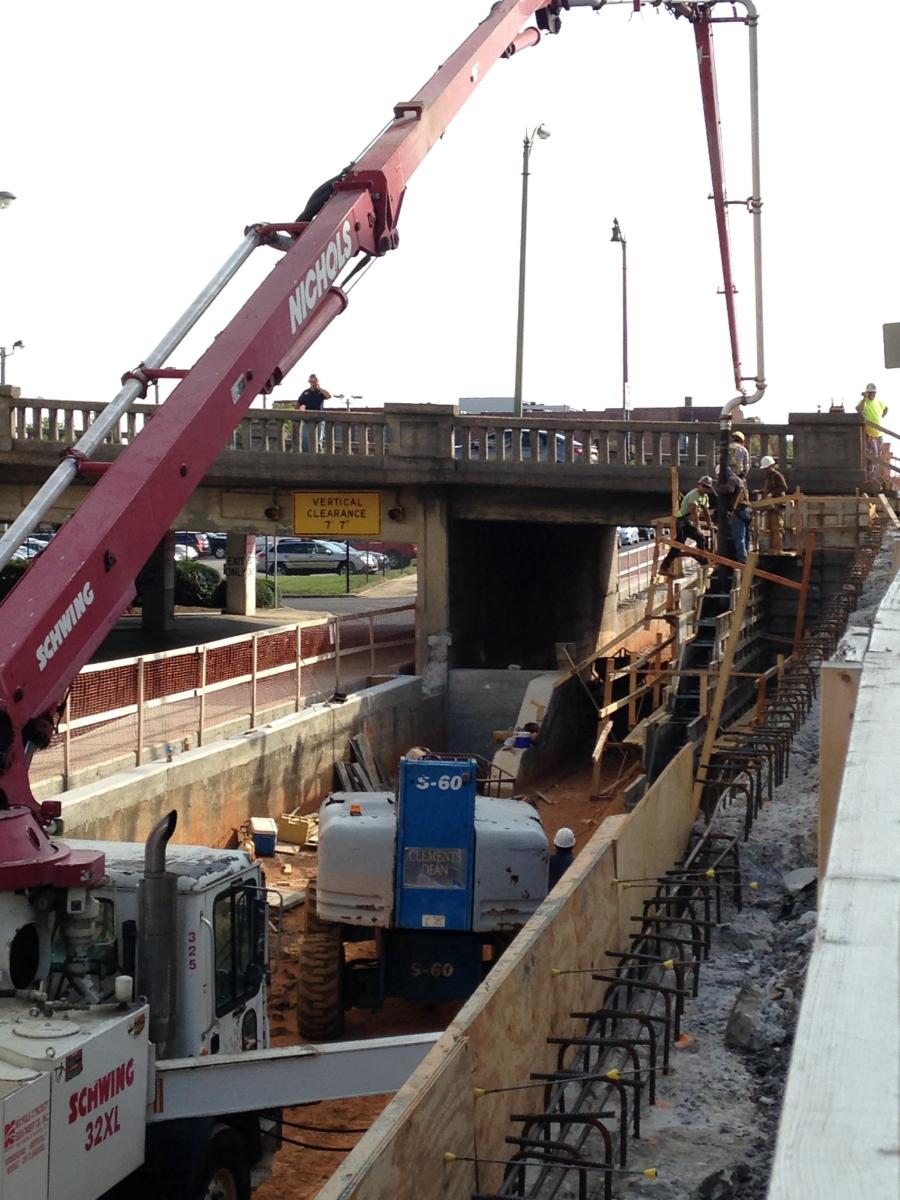 Cheryl Morgan, FAIA photo A project that will tie the city’s industrial past to its present and future is making headlines in Birmingham, Ala., Rotary Trail — more than a quarter-century in the making — is an extension of nationally recognized Railro

A project that will tie the city's industrial past to its present and future is making headlines in Birmingham, Ala., Rotary Trail — more than a quarter-century in the making — is an extension of nationally recognized Railroad Park from 20th Street to 24th Street along First Avenue South.

“To commemorate its 100th anniversary in 2013, the Rotary Club of Birmingham chose to fund the construction of a greenway park in 'The Cut', an old railroad bed along First Avenue South,” said Bill Jones, co-chair of Rotary's Centennial project. “This old rail bed was a terrible eyesore, full of trash, and deteriorating quickly. The idea for this revitalization project was presented to the Rotary Club by Wendy Jackson at Fresh Water Land Trust. More than $3.5 million was raised by the Rotary Club of Birmingham membership, and the park, when completed, will be known as Rotary Trail.

Rotary, an organization of business and professional leaders united worldwide, provides humanitarian and other services as a way of giving back. The Rotary Trail project is one example of how the Birmingham community can be better served.

“Its significance is that it's located within the Red Rock Ridge and Valley Trail system that runs for several miles throughout the city,” Jones said. “Rotary Trail connects Railroad Park and Regions Field with Sloss Furnace and Avondale. While several unique residences, offices and other businesses exist along Rotary Trail now, the park will have a significant positive impact on additional development in this area. There are many other unique aspects of the trail, including indigenous plants, trees and boulders, solar charging stations and informational areas.”

Wendy Jackson, executive director of Freshwater Land Trust, said, “The Rotary Trail adds a significant downtown connection to the Red Rock Ridge and Valley Trail System. This addition will provide additional green space for downtown residents to enjoy, which is what matters most to us.

“A linear greenway through the heart of downtown will connect Sloss Furnaces to Railroad Park and beyond. In addition, the innovative design of the trail will improve water quality for Valley Creek, a critical watershed for the Birmingham area.”

Jackson said, “The Freshwater Land Trust takes a businesslike approach to conservation, and prides itself in its ability to bring unique public and private partners to the table. Through this partnership, we are not only able to bring an urban greenspace to life, but we are also contributing to the economic development and renaissance of Birmingham.

“This public/private partnership will not only support outdoor family recreation, but also improve our community's water quality through an appropriate storm water drainage system. The historic cut is an abandoned rail line that is 16 feet below street level, plagued by crumbling concrete and graffiti. Although mostly hidden from view, this site was a forgotten part of Birmingham, relatively unknown to most observers. The century-old cut only served as a water wasteland, draining non-point source pollution from the streets of Birmingham directly into Valley Creek.”

The trail's new design raises the grade of the cut to approximately six feet. The trail, along with the green vegetation located along its corridor, will allow for the filtration of sediment, oil, pollution and other storm water runoff before it flows into Valley Creek and eventually into one of the area's primary drinking water sources, the Black Warrior River.

“The new Rotary Trail is helping to make one of the largest positive impacts on our community's water quality in recent history,” said Jackson. “This project is a testament to what public-private partnerships can do for the community.”

Wilsonville, Ala., based Clements Dean Building Company LLC is serving as general contractor on the high-profile project, which should open in 2016. According to Clements Dean managing member Gary Dean, completed tasks include site grading and the demolition/extension of the retaining wall at the site.

“Tasks under way or remaining include site lighting, irrigation, landscaping, concrete pedestrian bridges, concrete stairs and ramps, perimeter fencing and security cameras. The biggest challenge on this job is access to work, due to the narrow, linear nature of the job site. In addition, one day of rain usually prevents two or three days of meaningful work, due to a soggy site.”

Equipment being used on this project includes loaders, track hoes, skid steer loaders, a boom truck, dump truck, trenchers, forklifts and basket man lifts. Roughly 2,000 cu. yds. (1,529 cu m) of dirt is being moved during construction, which began in May 2015.

Supporters hope the trail will lead to more economic development outside the area surrounding Railroad Park. David Fleming, chief executive of REV Birmingham, said, “Birmingham has become a shining example of how well-placed and well-designed public spaces can attract new development, business and residents. Railroad Park has been a game changer for downtown. But Railroad Park was envisioned by early advocates as one central part of a larger greenbelt through the City Center. Rotary Trail will pick up the vision and keep it going. We are already seeing businesses seek locations near the trail and it's not even finished yet.”

“A city should not just be a collection of individual projects, but a seamless flow of connected places. Public spaces and private uses should flow together to make a great city.

“Rotary Trail is an adaptive reuse of a historic industrial element in our landscape, namely the railroad cut used by industry in the area. It give this older element that was obsolete a new life.”

To mark the site, a nearly 50-ft. (15.2 m) sign will read “Rotary Trail in the Magic City” on a metal skeletal frame. Landscaping, lighting and railing will welcome visitors into the trail. At Richard Arrington Jr. Boulevard, stairwells and additional signage will make travelers aware of a greenway with spaces to walk, sit or play just below.

Boardwalks under the viaducts at Richard Arrington Jr. Boulevard and 22nd Street will feature rocks and small boulders indicating a dry riverbed. The eastern terrace at 23rd Street will have space for additional bench seating, as well as sculptured seating.

An amphitheater at 23rd Street will provide the setting for impromptu street performances, as the elevation of the trail brings visitors back up to street level and a more modern entrance will adorn the 24th Street entrance to the trail.

At a groundbreaking for the new trail, Johnathan Austin, Birmingham city council president served as one of the shovelers for the ceremony.

“The potential for the downtown area continues to grow with the addition of beautiful spaces like the Rotary Trail that will be a unique asset for both residents and visitors to enjoy,” Austin commented. “This project has been in the works for a while now, and I am excited to see it finally come to fruition.”

The suggestion to utilize the railroad cut for recreation was first made more than 25 years ago. A former Birmingham City Council member led a movement following proposals in a city center master plan to fill in the below-grade areas and plant trees in the resulting street-level median to create a boulevard on First Avenue South.

In addition to the pivotal donation from the Rotary Club, the city of Birmingham has pledged $2 million from a federal TIGER grant for streetscape and infrastructure improvements to enhance the highly anticipated project. The trail, created to expand Railroad Park's impact eastward into downtown Birmingham, will serve as part of a proposed “Cross to Sloss” continuous recreational link between the Birmingham CrossPlex at Fair Park and Sloss Furnaces.

The Birmingham firm Goodwyn Mills Cawood serves as landscape architect on the project, with urban designer Jane Ross having played a key role in the process. According to Jeff Slaton, Goodwyn Mills Cawood architect, “The primary design challenge was, of course, the confined site that is narrow and below grade. Also, it was changing people's perceptions about what this unused rail bed could become.

“For so long, the rail bed was a big question mark, and what should be done with it. Changing perceptions was only possible because of the new development taking place downtown, the success of the nearby Railroad Park and the willingness of the Rotary Club to step up with a big portion of the funding for their centennial project, as well as the city,” said Slaton.

One of the chief concerns when designing a project of this nature was the stability of the wall, according to Slaton.

“There was plenty of spalding concrete to deal with. Overall, though, after examining the condition, it was surprisingly stable. The elements are a concern with any outdoor project like this. You are subject to the elements throughout the project. You are never dried in. Also, because it sits lower than street level, you have to deal with some drainage, because of rain.”

Incorporating green features was another goal of the firm, although options were somewhat limited.

“There aren't many sustainable features that can be integrated in a space like this,” said Slaton. “The trail will include solar powered charging stations; however, the largest sustainable feature is the park itself and the fact that it re-uses a space that was once seen as unusable. Taking what you have and making something new is the most sustainable thing you can do.

“Although named Rotary Trail, it's really more of a linear park, an extension of the highly successful Railroad Park nearby, but also a companion project to the Jones Valley Trail which runs parallel to Rotary Trail and extends across downtown Birmingham from east to west.”

The firm has experience designing a number of city parks and trails for various uses, which Slaton called a plus in designing Rotary Trail.

“They all seek to engage the community and provide a space for passive and active recreation or gathering spaces for play or open expression through the arts,” Slaton said. “All of these respond to their environment, whether it be topographical, geological or hydrographical. This one is unique in the confined space it occupies, and what that space has been for the city. It creates an opportunity to respond to a unique urban feature, and apply those same goals for a park or trail in a new way. We have the opportunity to create something no one else can replicate, because these are very specific existing conditions.

“We hope it engages the community as successfully as Railroad Park has. We want the park to help revitalize the business around it, and connect the new and exciting development taking shape from Regions Park to the Lakeview District. With the multiple access points throughout the trail, it will take an abandoned area with no real purpose that was seen as a literal scar in the middle of the city, and turn it into an asset where people can have lunch or just take a stroll in the middle of the day.

Slaton said, “Rotary Trail defines a new moment in Birmingham's history. It reflects the city's dedication to preserving its assets, and providing new opportunities for the community. Rotary Trail takes a departure from your traditional park and, instead, breathes new life into an abandoned railroad cut. Amidst the existing graffiti and rubble, there's an opportunity for the trail to be an instrument of social connectivity — to reconnect the many neighborhoods of this city.”