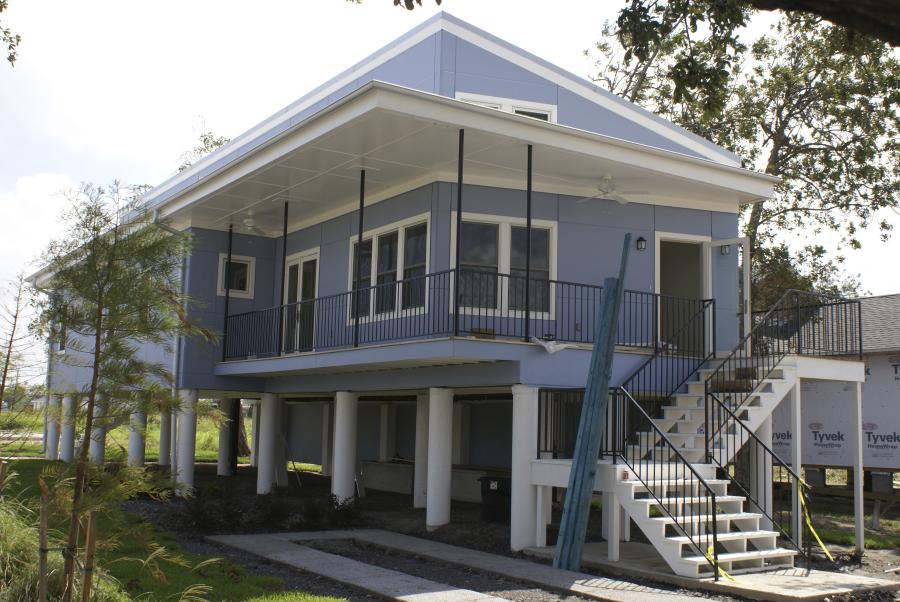 NEW ORLEANS (AP) — An attorney plans to sue actor Brad Pitt's foundation over the degradation of homes built in an area of New Orleans that was among the hardest hit by Hurricane Katrina.

The forthcoming lawsuit against Pitt's Make It Right foundation will be filed on behalf of some Lower Ninth Ward residents, who attorney Ron Austin told WWL-TV have reported sicknesses, headaches, and infrastructural issues.

Enlisting award-winning architects, Pitt founded the venture in 2007, two years after Katrina devastated the city and essentially washed away what would become the Make It Right enclave.

Construction began in 2008, working toward replacing the lost housing with 150 avant-garde dwellings that were storm-safe, solar-powered, highly insulated, and “green.” The homes were available at an average price of $150,000 to residents who received resettlement financing, government grants and donations from the foundation itself.

But 10 years and more than $26 million later, construction has halted at around 40 houses short of Pitt's goal, and some homes are falling apart. Residents have reported sagging porches, mildewing wood and leaky roofs.

“Essentially, Make It Right was making a lot of promises to come back and fix the homes that they initially sold these people and have failed to do so,” Austin said.

The foundation in 2014 did spend an average of $12,000 each on 39 homes to replace the deteriorating TimberSIL lumber, which was billed as environmentally friendly, weatherproof and durable, NOLA.com / The Times-Picayune reported. Make It Right then sued TimberSIL for $500,000, but it's unclear whether that dispute was settled.

Despite that expenditure, a year later, Pitt expressed satisfaction with what had turned into a proper Crescent City neighborhood.

“I get this swell of pride when I see this little oasis of color and the solar panels,” Pitt told The Times-Picayune in 2015. “I drive into the neighborhood and I see people on their porch, and I ask them how is their house treating them? And they say, 'Good.' And I say 'What's your utility bill?' And they'll throw something out like, '24 bucks' or something, and I feel fantastic.”

Earlier this summer, Make It Right hit the headlines in New Orleans again with the demolition of one of the houses. Having been unoccupied for years, the moldering house demolished in June was described by The Times-Picayune as “a tattered loaf of rotting wood, fraying tarpaulin and ominous open doorways.” Fed up, resident Constance Fowler made City Hall aware of several building code violations, and The New Orleans Advocate reported that Make It Right paid for the demolition, citing a contract.

Make It Right did not respond to WWL-TV's request for comment this week, nor to The Times-Picayune's request for comment following the demolition. But when station WDSU-TV reported on the blighted house and other residential problems in April, the foundation did provide a written statement.

“Our homeowners' well-being and privacy are some of our top priorities and we work closely with them to address their concerns,” the statement read. “Each situation is different and we are currently coordinating the necessary follow up with the appropriate parties to address any areas of concern.”

The report didn't indicate how many residents would join Austin's lawsuit, and many residents quoted in news articles this year said that despite some problems, they were appreciative of the foundation's work. Fowler herself told The Times-Picayune that without Make It Right, she might never have been able to afford a house.

Another resident, Neal Dupar, told WWL-TV that he's not a part of the forthcoming lawsuit, and echoed Fowler's sentiments about affordability. He said that Make It Right has responded to his complaints, sending an inspector to look at his house, though he's heard nothing in the month since.

“I don't know what the future is going to bring with this house or everybody else's house, but it's going downhill now,” Dupar said.