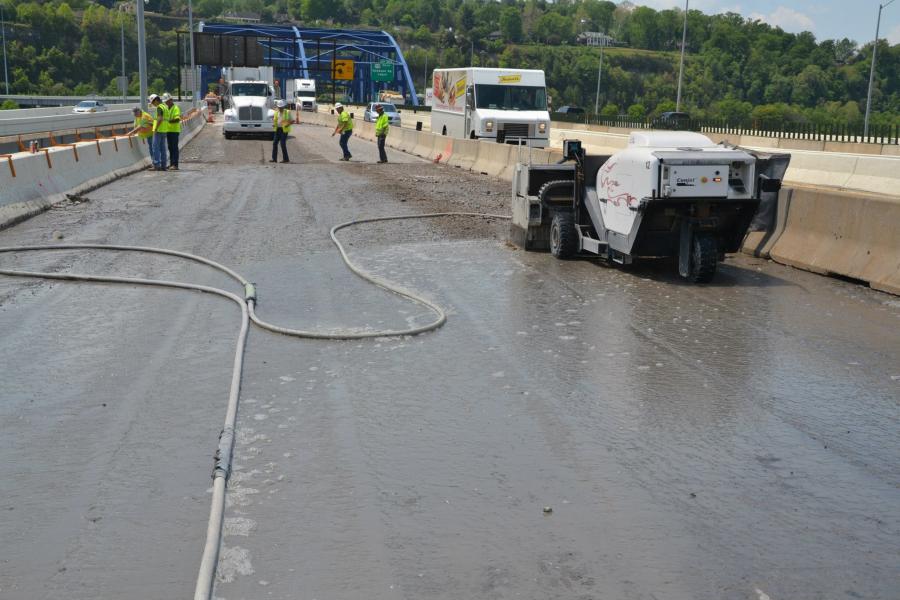 WVDOT photo. The West Virginia Division of Highways is nearing completion of a project to rehabilitate a total of 19 bridges along Interstate 64 in the Charleston area.

The West Virginia Division of Highways is nearing completion of a project to rehabilitate a total of 19 bridges along Interstate 64 in the Charleston area.

The project began on April 4, 2015, and the original completion date was set for Oct. 28, 2015. However, it was extended due to weather and project issues.

The $18 million contract was awarded to Kokosing Construction Company Inc., where Mike Koelbl is the vice president. Jason Jackson serves as the field engineer on the project.

The contract calls for the rehabilitation of 19 bridges along Interstate 64, beginning at the Eugene Carter Memorial Bridge (also known as Fort Hill Bridge) and ending where the Brooks Street on-ramp enters the interstate. Numerous expansion joints will be replaced, repairs will be made to barriers, a latex modified concrete overlay will be applied to bridge decks, and several cathodic protection systems will be replaced. Four structures utilize the cathodic system, which is a technique used to control corrosion of metal in the bridge deck.

“Kokosing Construction is the first contractor in West Virginia to implement a traffic control pattern known as contra-flow,” said Scott P. Love, PE, of Kokosing’s highway division. “The contra flow lane allows the public and highway construction workers to travel safely and work efficiently within the I-64 construction zone. Kokosing Construction also is installing a new cathodic protection system, a complex rehabilitation method that electrifies a titanium layer within the concrete to protect against corrosion to help sustain a concrete structure’s integrity.”

To install the contra flow lane and safety barrier for the construction crews, Kokosing used a 20-ton (18.14 t) rubber-tired excavator with a bracket attachment to move nearly 20,000 ft. (6,096 m) of temporary barrier wall. To remove and install the 86 expansion joints on the interstate system around Charleston, Kokosing used a 43 ft. (13.11 m) boom operated forklift, known as a telehandler, paired with the versatile construction 107 hp backhoe.

To replace the bridge deck surface, a Kokosing subcontractor, the Velotta Company, used a flexible concrete paver to pave more than 3,000 sq. yds. (2,294 sq m) — half a football field — of smooth concrete in one night.

Pullman was subcontracted to rehabilitate and metalize the undersides of the Eugene Carter Bridge. Metalizing provides the Al-Zn-In protective surface that absorbs the corrosive chemicals that deteriorate a structure.

Michael Baker International is the designer and inspector of the design-build project.

“Ongoing efforts for effective communication, a hard-at-work attitude, and determination to provide the best product for the owner and their contractors is leading this project to be a success for all,” Love said.