Broadway Avenue is billed as the gateway into Boise, and this gateway is receiving a makeover with the construction of a new Broadway Bridge that is slated to open later this fall. 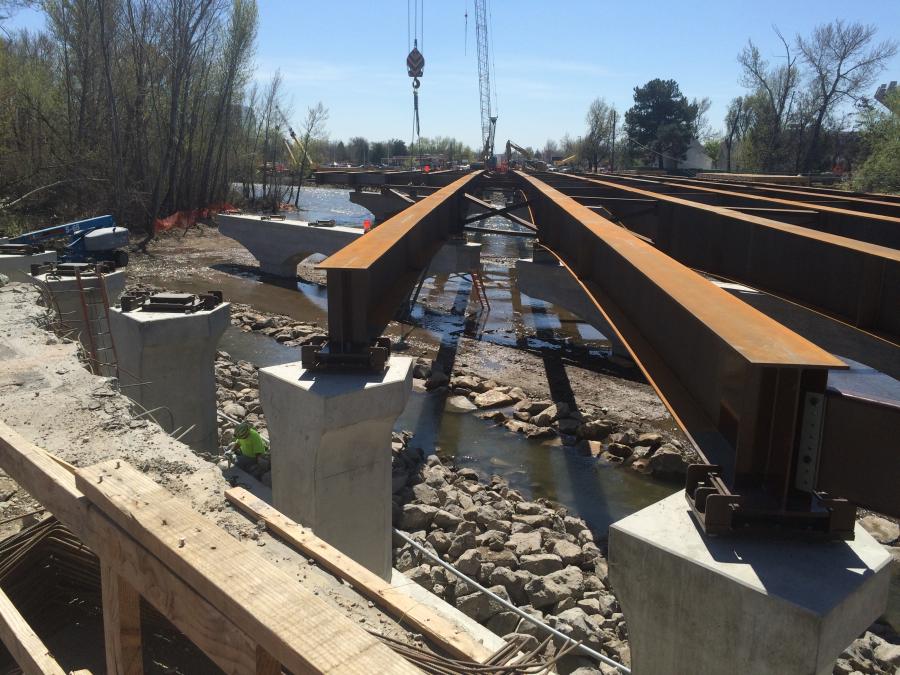 Broadway Avenue is billed as the gateway into Boise, and this gateway is receiving a makeover with the construction of a new Broadway Bridge that is slated to open later this fall. Since fall 2012, the Idaho Transportation Department (ITD) has shepherded this $20.2 million-dollar project through its design and environmental review phases, and earlier this year, construction finally began.

The new Broadway Bridge is the third iteration to span the Boise River; the first was built in 1892, and the second bridge, which existed until a few months ago, was built in 1956. With average daily trips (ADTs) totaling over 24,000, the bridge started showing its age in recent years.

“It's standard for ITD to inspect our bridges every other year,” said Mark Campbell, a project manager of the Idaho Transportation Department. “But for the Broadway Bridge, we had to inspect it every year, and with it slowly deteriorating, it was approved for replacement.”

A replacement could then accommodate Boise's future growth — an estimated 37,700 ADTs by 2037 — and also safely serve other users including bicyclists and pedestrians. The previous bridge hadn't been designed to accommodate both vehicles and cyclists.

ITD's vision of the new bridge was for it to have a 100-year service life, and Bruce said that “because of the location and considering the fact that this bridge will be relied upon to provide service for the next 100 years, we needed to upgrade the bridge to current highway standards and make it acceptable by all stakeholders and to the entities involved.”

Because of Broadway Bridge's significance to the surrounding Boise neighborhoods — Boise State University to the south and St. Luke's Regional Medical Center to the north — and the impacts of the construction upon the community, commuters and businesses, ITD embarked on an aggressive outreach strategy “that went above and beyond other construction projects” to educate the public as to why the bridge needed to be replaced. Beginning in fall 2012, a number of stakeholder meetings were held, in addition to two public open houses. During the series of design workshops that began in 2013, the ITD design team solicited feedback from the public on the proposed bridge design until the unveiling of the final design in December 2015.

“As the meetings progressed, the detail got a little deeper and deeper until we came up with the final product,” Campbell said. In response to their outreach efforts, he added that the community members “really felt like they were part of the decision making, which they actually were. They felt like they were being listened to.”

One of the design elements the public requested was reducing the number of piers in the river to avoid impacting the river's flow and also to benefit the recreationalists who float down the river. This was a design request that motivated the team to come up with a design structure that impacted the river even less than the original design, Campbell said.

The final design resulted in a five-span bridge with six vehicle lanes, two 6.5-ft. (1.9 m) bike lanes, and 10-ft. (3.04 m) wide sidewalks. Three 18-ft. wide (5.48 m) belvederes provide viewpoints, and the curved railing design running the length of the bridge enables all users an open view of the river. Other design elements include improving ADA connections at all four corners of the bridge to the greenbelt located beneath the bridge and raising the greenbelt above the floodplain to alleviate the spring flooding.

Knife River was awarded the bid and commenced work in January 2016. The winter phase of the construction consisted of bridge demolition and pile driving to complete the foundation of the bridge structure. Campbell said they did this work while river flows were down, and because of the potential environmental impacts this work would cause, Bruce said that in the beginning there were numerous special interest groups watching activities closely.

“We continue to exercise our typical due diligence to make sure we are working within the permitted parameters,” he said. “Throughout construction, we have been in contact with various organizations that were interested in different aspects of the project. I think they have a level of confidence now in what we are doing, and we welcome any questions they may have.”

Now with the piers installed and the last girder set into place, crews no longer have to work inside the river channel when the river flows are up. Following the placement of the 33 girders, work this spring consists of building of the bridge deck, and work will also commence on the greenbelt and pedestrian and bicyclist access points.

With the bridge construction under way and on schedule, traffic is detoured onto the Parkcenter Boulevard Bridge, and Campbell said the concerns that the neighborhoods had, such as drivers taking shortcuts, haven't materialized because the detour is working.

“Because it's such a high volume of traffic through the area, we were hoping everything to go well. The detour was implemented and it went very smooth, almost better than we expected,” he said, “and the concerns from the neighborhoods haven't been an issue.”

The Broadway Project website has weekly/monthly construction updates and there also is a construction camera so the public can see the progress.

“We've had cameras on a few other project and this is just another one we're doing it on. It just so happens that because of its location and the interest [in this project], that it's a very unique feature that we've included,” Campbell said, adding that the public can see their suggestions coming into play as the bridge is being constructed because of the construction cameras.

In addition to the Broadway Bridge construction, there also is pavement work on Broadway Avenue between University Drive and Myrtle Street and Myrtle Street and Front Street, which will occur during summer and into fall. Campbell said that they attached this rehabilitation work to the Broadway Bridge project so as to avoid having to return to the area in 2017 and impact traffic again.

“The most exciting thing about this project is being able to upgrade this location; there's a lot going on in this neck of the woods, so to speak,” he said. “To [build a new bridge] that is up to today's and the future's, standards as well is just fantastic. Pedestrians and vehicles will get a better use out of it. It just benefits the entire city.”