Bronze Artwork Honors 'Mr. JCB' on the 100th Anniversary of His Birth

The 100th anniversary of the birth of JCB’s founder was marked with the unveiling of a specially commissioned bronze bust. 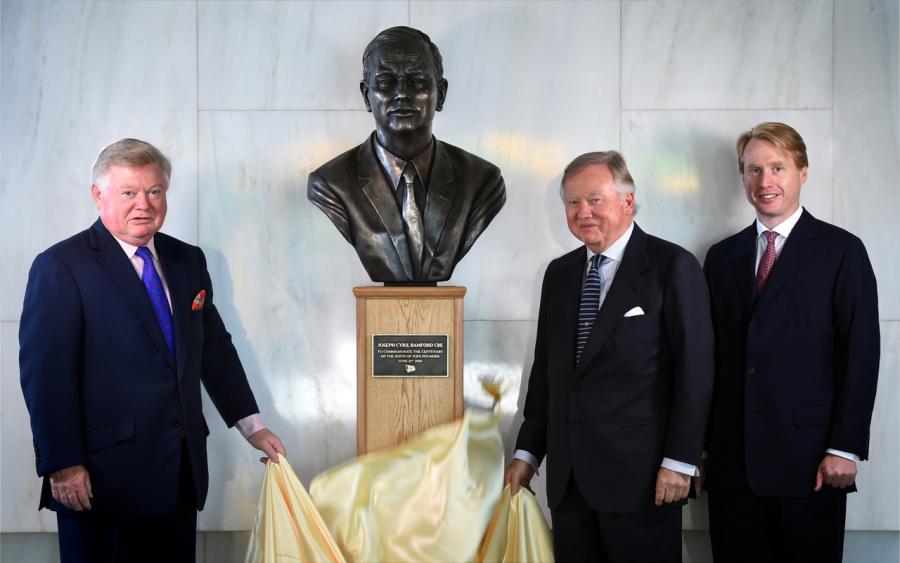 Earlier this week,, the 100th anniversary of the birth of JCB's founder was marked with the unveiling of a specially commissioned bronze bust.

The son of Cyril and Dolores Bamford, Joseph Cyril Bamford CBE was born on June 21, 1916 at his family home, “The Parks,” in Uttoxeter, Staffordshire. Young Joseph's playtime was spent building cars and boats – early signs of an inventive flair which would see him become one of Britain's most celebrated engineers.

Bamford retired in 1975 and handed the company he founded in a lock-up garage in Uttoxeter in October 1945 to his son Anthony. At that time, JCB was turning over more than $63 million a year and employing hundreds of people. Bamford had also become universally known as “Mr. JCB” as well as “Jamais Content” (French for “never content”) Bamford, thanks to his unwavering drive to do things better.

On June 21, Mr. JCB's sons Lord Anthony Bamford and Mark Bamford and grandson Jo Bamford marked the 100th anniversary of his birth and his many achievements by unveiling the one-and-a-quarter-scale bronze bust at JCB's World Headquarters in Rocester.

The bust is the work of another innovative son of Staffordshire, Stoke-on-Trent-born sculptor Andrew Edwards, 52, who spent five months creating the image of Mr. Bamford in his 1960s heyday when JCB was establishing itself on the world stage.

“My father was without doubt an engineering genius and we wanted to mark the centenary of his birth and the huge contribution he made to Staffordshire and to Great Britain,” said Lord Bamford. “We are delighted with the bust, and it's very fitting that it has been created in the county of his birth and by a sculptor whose talent was developed right here in Staffordshire.”

The bust will now be on permanent display at JCB's World Headquarters and will be seen by the thousands of visitors who pass through the company's doors every year.

“I am always extremely nervous when I undertake projects of this nature because they are so very personal to the family members involved,” said Edwards. “By working closely with the Bamford family, I believe we've created a wonderful likeness of someone who is undoubtedly one of Staffordshire's most famous sons. It has been an honor to have undertaken this work.”

The bust weighs around 110 lbs and stands around 28 inches high. It's not the first bust of Mr. JCB to be commissioned; a smaller one was cast in 1964 and presented to him by employees in gratitude for a nearly $370,000 bonus he shared with the workforce after a record year. That work of art sits on Mr. JCB's original desk in the “Story of JCB” permanent exhibition at the World Headquarters.