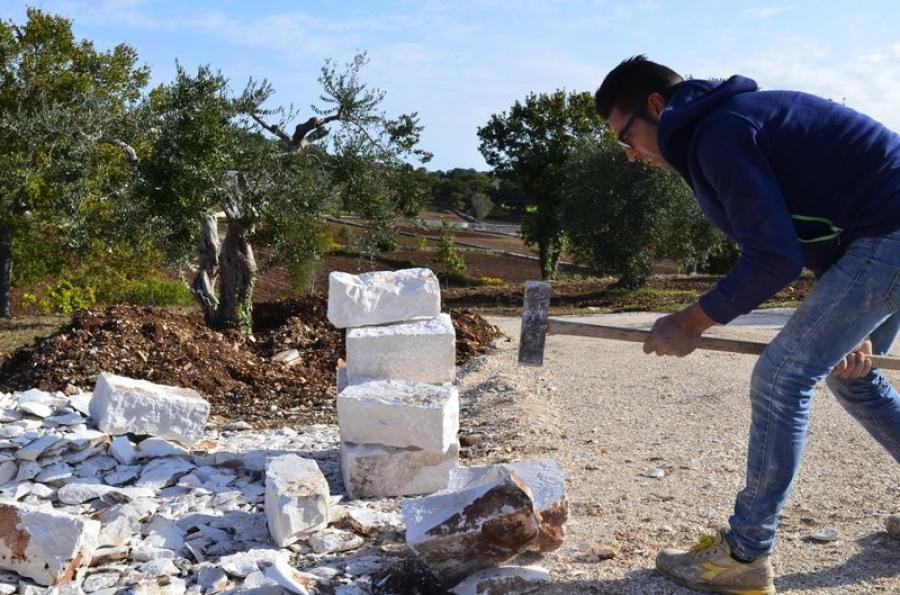 Angelo Pentassuglia, a master stone builder from Italy's Puglia region makes a block out of a chunk of limestone with a pickax. His work site is an old trullo - a stone structure built without mortar - being incorporated into a luxury modern home. Stone is a quintessential building material in Europe - and one largely gone by the wayside in the United States. (Photo Credit: Cain Burdeau via AP)

LOCOROTONDO, Italy (AP) — There's no better place to understand how to build in stone than this hilltop town in Puglia, Italy's boot heel, where master stone-builders have been sculpting rocks for centuries.

Stone, of course, is a quintessential building material in Europe, and one largely gone by the wayside in the United States, where much of the construction is in wood, cement and brick.

I'm interested in what to do with a pile of stones because I've got one.

A few years ago, my wife, two boys and I bought an abandoned and overgrown farm property in northern Sicily. On it was a big pile of stones from a collapsed circular structure of some kind at the property's entrance. We wanted the rocks out of the way. So during our first winter a year ago, with nothing better to do on cold rainy days, I moved the pile. I carted them in a wheelbarrow to a field where once a vineyard had grown.

The pile of stones was not recorded on the catasto, the land register, and I wondered what they could have been used for. I was told by friends they might have been an animal shelter or a kind of room in which to make charcoal.

But what could I do with them?

I was eager to learn more about stones during a visit to my father, who has lived for years in Puglia. In Locorotondo, I quickly learned, the locals are blessed with an abundance of limestone, an easy-to-work material. Megalithic temples on Malta and at Mycenae were erected with limestone blocks, as was everything from city halls to country walls in this part of Puglia.

My guide into this world of rock building was my friend Amanda Roelle, an American architect studying stone construction. She drove me to meet Angelo Pentassuglia, a 33-year-old stone-smith carrying on a generations-old building enterprise.

Pentassuglia knows how to build a trullo, which is a dry-stone construction — a technique using no wood. This involves constructing self-supporting conical-shaped stone roofs. A trullo's wall consists of two separate rows of stacked blocks with smaller stones in between them — and it all stands firm without the use of mortar.

In the past two decades, the market in trulli — long considered unsuitable as homes due to their dampness and lack of light — has skyrocketed. Trulli vary in size. Often, several structures are attached to one another to form many cones, and thus many rooms.

Pentassuglia, a limber and muscle-taut thin man, is a wizard with stones. His work site was an old trullo that he and his cousin were taking apart to incorporate the stones into a luxury modern home. Moss grew on the trullo's walls.

The work site was dazzlingly complex and yet rather simple. There were only a few tools, and little noise other than the sound of a hammer chipping and striking stone.

“To make a trullo, all you needed was a pail, a hammer, a pickax and a string,” Pentassuglia said.

He picked up a pickax to demonstrate how to make a block from an irregular chunk of rock.

“You start by making a flat surface,” he said, and began striking.

Within a minute he had a nice block. He placed it on a growing pile of similar blocks, to be used to build new parts of the house.

He stopped at a pile of oblong, stone roof tiles, preserved from the original cone roof. They are the chianche, flat limestone plates. Laid on top of each other in concentric circles, they constitute an impermeable roof.

Pentassuglia said the chianche are highly valued because their quarries are depleted.

Mounting them takes a masterful touch. If it's not done right, water enters.

He walked up the trullo's steps, through its archways, over its floors. “There's a lot of labor with rocks,” he said, stopping to admire the workmanship of the stone, worn smooth with time.

Why did people make trulli?

“What did you have? The earth and stone. So, they used them to make a life for themselves,” he said. “It's what you have under your feet.”

Chip, chip, chip went the sound of his cousin's hammer. Pentassuglia smiled. “You can be there chipping for a month.”

“It's difficult to explain what we are doing here,” he said. “It looks like everything will fall and you can't understand a thing.”

But it was all going to be put back into place, he said.

Afterward, Roelle explained that the type of stone found in the area was fundamental to understanding why stone buildings have been so successful in Puglia.

“It's workable stone, and that is what vernacular architecture is all about,” she said. “It can only be experienced in this place.”

What did I learn?

First, know your stone. I, for one, still don't know for sure what kind of stone my pile is made up of.

So, after I get it identified, I think the next step will be to find out what tools are used in Sicily for working stone.

Then, I too may try my hand at erecting retaining walls, terraces, steps along walkways, maybe even a structure like the one that once existed in front of our property.