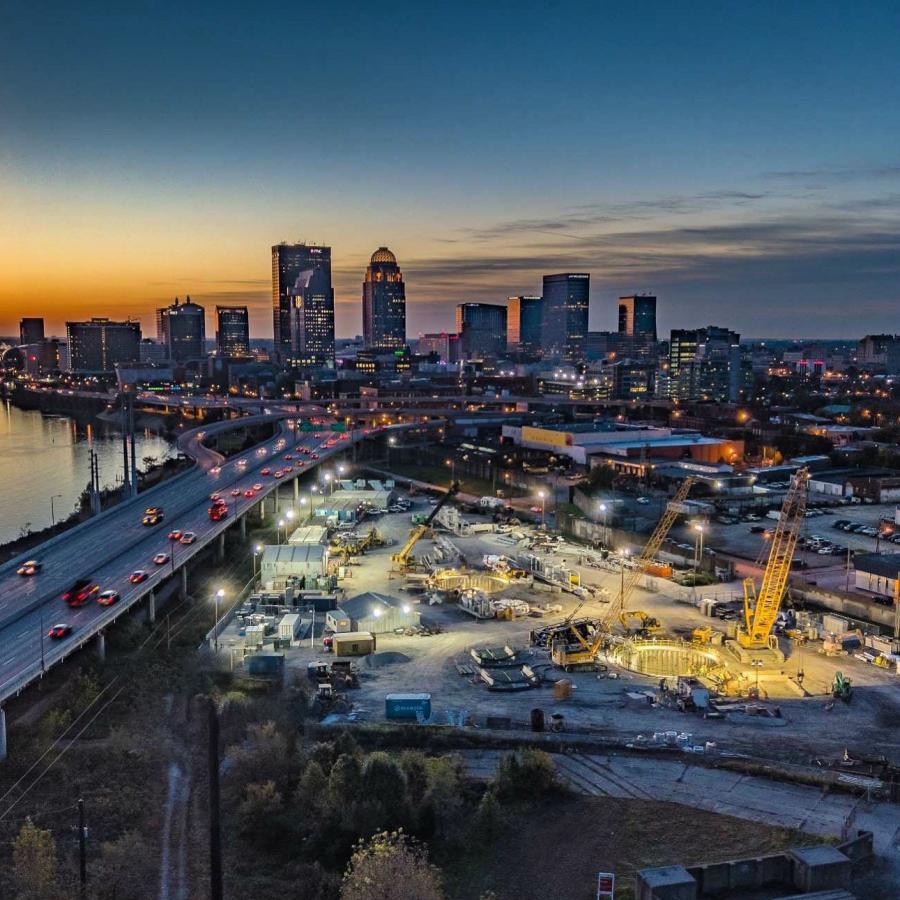 A boring machine dubbed “Bumblebee” continues carving out a 4-mi., 18-story deep tunnel in Louisville, Ky., as part of a $200 million project to help prevent wastewater and stormwater from overflowing into the Ohio River during periods of heavy rain. (Louisville MSD photo)

As work on a unique $25 million pump station wraps up, a boring machine dubbed "Bumblebee" continues carving out a 4-mi., 18-story deep tunnel in Louisville, Ky. It's all part of the Louisville/Jefferson County Metropolitan Sewer District's (MSD) $200 million project to help prevent wastewater and stormwater from overflowing into the Ohio River during periods of heavy rain. 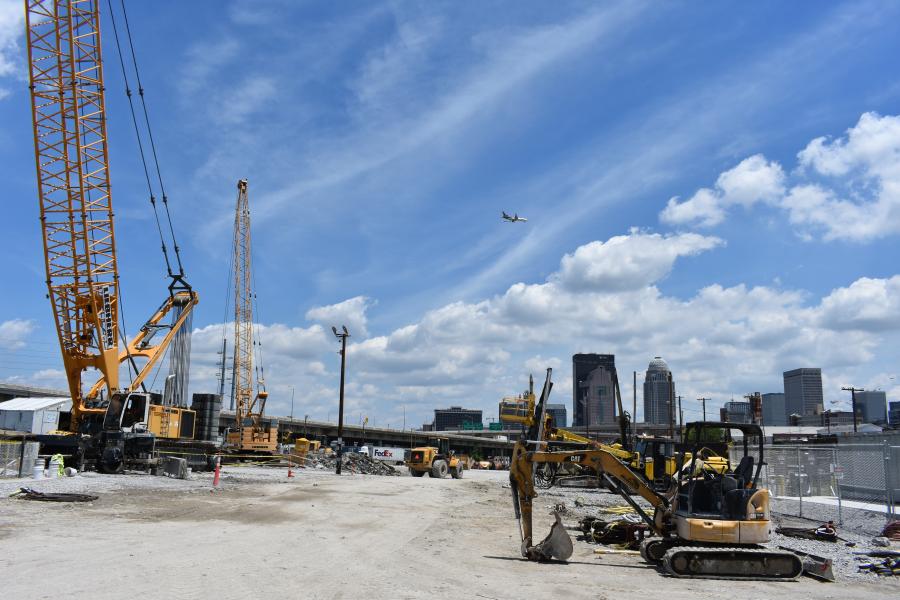 Construction on the tunnel began in 2017 and is anticipated to be complete in October.

"Work on the tunnel goes on in three, eight-hour shifts Monday through Friday," said Project Manager Jacob Mathis. "They use Saturdays as make up days or to do maintenance on the machine. Sunday is an off day. The tunnel, being as big as it is, has the capacity for 55 million gallons of storage. That's the equivalent of 83 Olympic-sized swimming pools."

The tunnel is 22 ft. in diameter and will be lined with a 12-in. fit form concrete liner for a 20-ft. tunnel when completed.

Bumblebee was named in an internal MSD contest by an employee whose mother once met Mohammed Ali, a native of Louisville. The boring machine is owned by JF Shea, of Walnut, Calif., in partnership with Traylor Bros. Inc. of Evansville, Ind. It was built in 1977 and has bored 18 mi. of tunnel in five cities in North America, including one in Canada. It arrived at the Louisville job site on 55 tractor trailer loads.

"The contractor owns it, but as part of the bid, MSD sent out requirements for the machine and the contractor had to take the machine they had and refurbish it," said Mathis. "We paid the $8 million cost of refurbishment. The machine is 412 feet long and weighs about 9,000 pounds. The 22-foot cutter head, which spins clockwise, is brand new, specifically designed for the conditions of our project and it came from Italy on a cargo ship to a New York harbor and was loaded and delivered in three separate pieces." 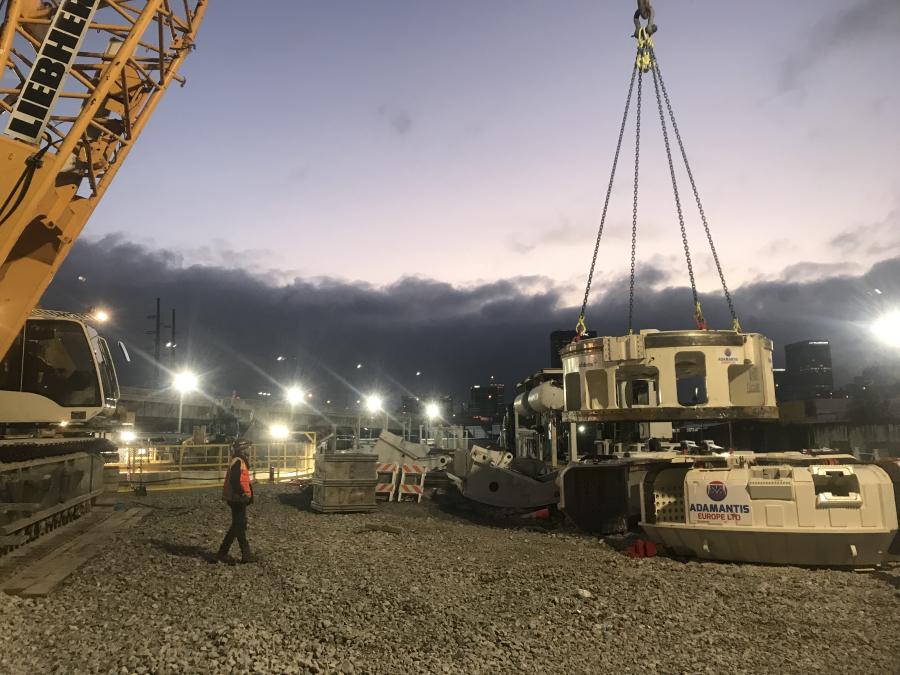 The excavation works like this, said Mathis. "We have a conveyor belt that stretches the length of the tunnel. There is an apparatus above ground that holds what is referred to as a cassette. It kind of looks like a cassette tape, but with a rubber conveyor belt. They insert a new cassette as the previous cassette of belt feeds out into the tunnel stretching it out as it goes. When the tunnel is finished, there will be eight miles of conveyor belt underground. As Bumblebee excavates the rock, it loads onto a horizontal conveyor belt and is transported back to the working shaft, where it transitions onto a vertical conveyor belt and brought to the surface. Once on the surface it is loaded into dump trucks and hauled to a local quarry for re-use. They can run up to 300 dump trucks a day."

One challenge the MSD did face early on was getting easements.

"We try to pick our alignment and stay on publicly owned property," Mathis said. "A portion is beneath the Ohio river for about a mile. There were a handful of private properties. Explaining what we were doing was more difficult than usual. Generally an easement starts at the surface and goes all the way down. You can't build above it. With the tunnel, we got an easement that goes 140 to 150 feet. Our easement is that and deeper, to the center of the earth. The property owner retains all rights above."

The Waterway Protection project features four major components. One of those, the Rowan Pump Station, is unique in its own right. While pump stations are generally bland, uninspired structures, Mathis describes this one as "piece of art." 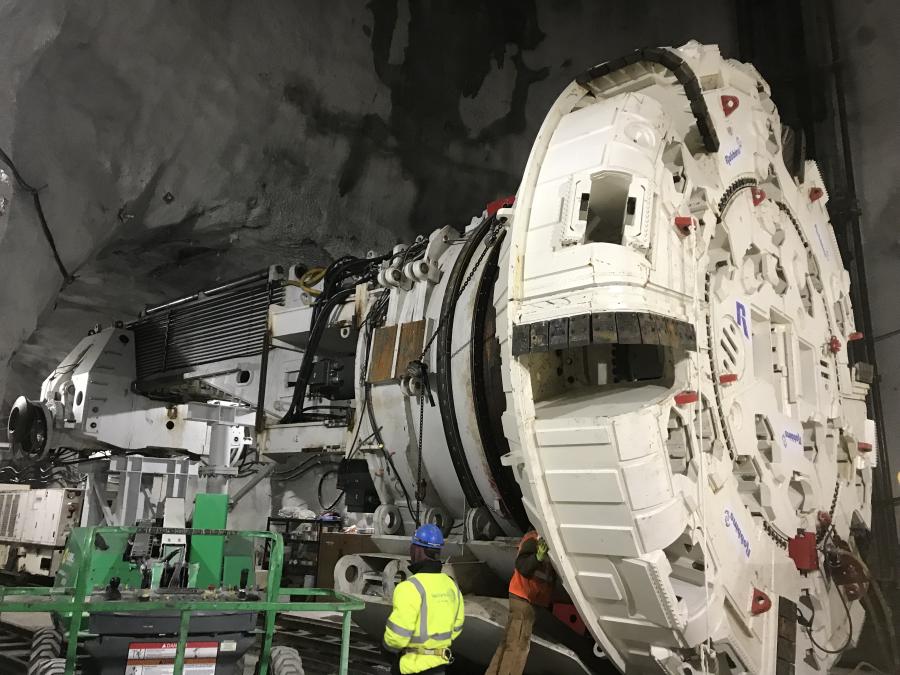 The park is a part of a long-standing, four-phase project to connect it to a downtown Louisville park. When the pump station is complete, MSD will deed the property to park owners while maintaining an easement.

Rather than build an unattractive structure, MSD and the park owners brought in architects to design something that stands out, but also is easily maintained.

"The building itself is 70-by-105," Mathis said. "The shaft that connects to the tunnel is in that building. They used aluminum corrugated and perforated panels for the top two thirds and it is illuminated with LED light fixtures that can illuminate through a backlight. The lower third is a corten steel panel. When they put it on the building, it was a shiny, brand new piece of metal. Once it has been exposed, it starts to rust and get that patina to it. Typically, MSD will put a fence around the entire perimeter to protect it from people. There is a fence around the back part. The front is open to the public, you can walk up and touch this building. The concern is if there was graffiti or any markings, we didn't want to go out and paint it every month. It wouldn't look very nice. So what this panel does if it is tagged or marked with graffiti, all we have to do is go out with a pressure washer and rust will come off and the graffiti with it."

How Bumblebee Was Named

The Metropolitan Sewer District (MSD) held a naming contest among its employees with the winner winning a tour of the tunnel, said Sheryl Lauder, spokeswoman of MSD.

"Mohammed Ali did a lot of charitable events. He was at a bank to do a signing event. The employee's mother worked there as a teller. She took in cookies for this charity signing. At the end, when Ali finished, he said, ‘I've been eating these cookies all day, they are really good, where did they come from?' They told him and he said, ‘Bring her in.' He basically said these are the best cookies I've ever had, why are you a teller in a bank? You should own our own bakery. Two years later, she had her own bakery."

The name is inspired by Ali's famous line, "Float like a butterfly, sting like a bee." CEG