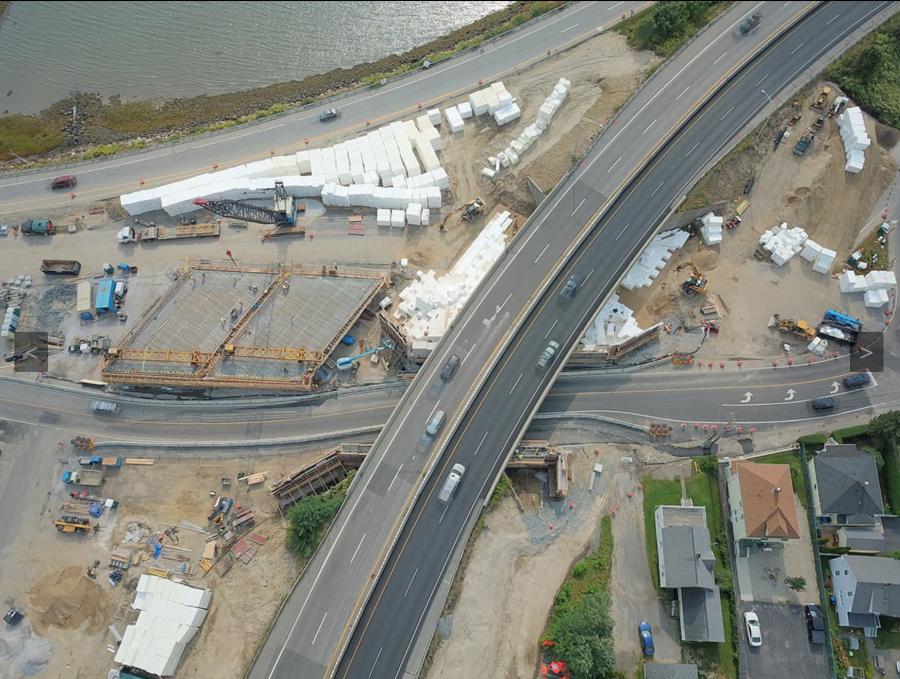 An aerial view of the I-295 Veranda Street bridge.

The busiest stretch of Interstate 295 in Maine is going to be shut down to traffic for almost three days in April, a move that will allow construction crews the time they need to install a new bridge over Veranda Street in Portland.

A section of the highway between Portland and Falmouth will close for 64 hours so that construction crews can demolish and remove the 61-year-old Veranda Street bridge and replace it with a completely new one. The modern bridge will be rolled into place next to the old overpass.

Officials from the Maine Department of Transportation (MaineDOT) told the Portland Press Herald that they chose to use the roll-in technique to limit the closure on I-295 to as little time as possible, rather than the years it might have taken to complete if normal from-the-ground-up construction methods were used.

Despite the state's accelerated bridge replacement plan, thousands of motor vehicles will still be affected by the closure, which is scheduled to start at 7 p.m. Friday, April 22, and end at 11 a.m. Monday, April 25.

In conjunction with the I-295 closure, Veranda Street will be closed for a full week, from April 18 through April 25.

MaineDOT told local news outlets that it is doing everything it can think of to spread the news about the closure, including hosting a live virtual meeting at 6 p.m. on April 6 during which the public can hear a presentation and ask questions about the $20.8 million project. Project fliers also have been mailed out to businesses and residences in the Portland-Falmouth area.

"This project has the potential to impact people from Aroostook County to Rhode Island," explained Paul Merrill, a MaineDOT spokesperson, during a telephone interview with the Press Herald on March 16. "We hope that no one is surprised or shocked by what we are planning to do."

He noted that before the pandemic, the stretch of I-295 near Tukey's Bridge in Portland and U.S. Highway 1 in Falmouth averaged 53,000 vehicles a day.

"It's the busiest stretch of road in Maine," Merrill said.

State officials said they realize there is no perfect time to undertake a project of this size but chose the weekend in April when they expect traffic to be lighter than it would be after the Memorial Day weekend in May.

MaineDOT contends that the Veranda Street Bridge is nearing the end of its useful life and needs to be replaced for safety reasons. The bridge was built in 1961 and, according to the transportation department, the deck condition of the overpass is rated as "poor" and, overall, the bridge is structurally deficient.

The Press Herald reported that the state agency had originally planned to shut down I-295 last October for the project but had to delay the closure until April due to a national resin shortage that slowed the process of obtaining replacement geofoam blocks for the bridge. The delay occurred after crews found that some of the blocks that were to be used to support the bridge foundation had been damaged, and the lack of resin made it impossible to find replacement blocks at that time.

The new bridge was constructed using what MaineDOT refers to as the "accelerated bridge construction," or ABC, design process. The practice is a common one but is used more extensively in other parts of the country.

A Self-Propelled Modular Transporter — or SPMT — will be used to move the new bridge structure into place during the interstate closure, Merrill noted

SPMTs transport heavy, massive objects that cannot be moved by traditional flatbed trucks. Most notably, NASA uses SPMTs to transport space vehicle components to and from one of its launchpads.

This will the first time MaineDOT will be using an SPMT, he said.

According to the Federal Highway Administration (FHA), accelerated bridge, or slide-in bridge, construction is a relatively new process that allows states to reduce the amount of on-site construction time needed to build or replace bridges.

The technique can significantly reduce traffic impacts, especially in urban centers with high traffic volume, by reducing planning and construction efforts by years.