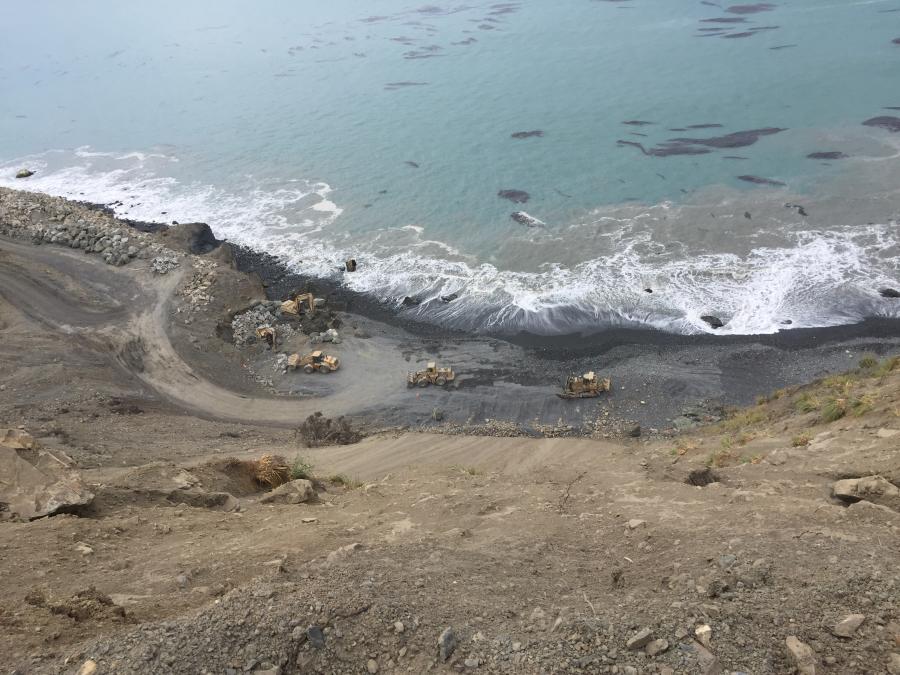 The new road will cross over the landslide material. Bulldozers and compactors will create a sturdy roadway surface atop the material. (Caltrans photo)

California Department of Transportation (Caltrans) has determined that the best way to repair and ultimately reopen coastal Highway 1 at Mud Creek near Big Sur is to build a road over the massive landslide covering a quarter mi. of the highway. Mud Creek is in the southern portion of Big Sur State Park.

Bulldozers and compactors will create a sturdy roadway surface atop the fallen material. Then asphalt will be applied for a new section of highway.

Initial work on the project began on Aug. 3 with contractor John Madonna Construction of San Luis Obispo, Calif., about 15 Caltrans workers and 20 support staff on duty.

The two-lane road has been closed since May 20, when the hillside above the highway gave way, dumping more than 5 million cu. yds. of mud and rock onto the highway and the ocean below. It was the largest slide ever recorded along the Big Sur coast.

Caltrans expects to have cost details as well as a timeline for reopening the highway by the end of August.

Engineers from Caltrans had a big decision to make in how to deal with the monster slide. They considered various alternatives including tunneling through the landslide material, building a structure around the slide or reutilizing the original roadway surface by pushing huge amounts of dirt and rock into the ocean below. The roadway is covered by about 40 ft. of material and the width of the slide is about one-third of a mi.

Traversing the landslide was considered a workable, less costly alternative. The new roadway will be realigned across the landslide and will be buttressed with a series of embankments, berms, rocks, netting, culverts and other stabilizing material.

Highway 1 is mainly used by motorists in cars and recreational vehicles seeking a more scenic route along the central coast of California.

“The highway is not suitable or very efficient for big-rig trucks, which you do not see,” said Jim Shivers, public information officer of Caltrans District 5. “Smaller trucks can make deliveries to the businesses in the area and of course many RVs use the highway.”

“Our staff has been working hard to tackle the weather-related challenges faced by Highway 1,” said Malcolm Daugherty, director of Caltrans, in a release. “We have made tremendous progress on Pfeiffer Canyon, have opened Paul's Slide and now have good news on the slide at Mud Creek. Our goal is to reconnect the areas impacted by winter storms as quickly and safely as possible.”

Tim Gubbins, district director of Caltrans District 5, agreed. “Our emergency contractor continues working dawn to dusk every day and will continue until we can safely reopen the highway.”

Subcontractor Associated Traffic Safety of Atascadero, Calif., is supplying flaggers and spotters. Other subcontractors are said to be on duty at the Mud Creek site.

Caltrans recently sent its rebuilding plan to various state, local and federal resource agencies and continues to work with the Big Sur community.

As part of the plan to traverse the landslide, extensive bulldozing will be needed to smooth out the surface for the new roadway.

“Graders, loaders and other equipment will need to work at the site extensively to create the subgrade for the new roadway,” said Susana Cruz, public information officer of Caltrans District 5. “In this respect, it will be like a typical realignment project.”

Once the new roadway is completed, motorists will climb just under 100 ft. from south to north at the site of the mudslide. “The entire section of roadway was lost due to the slide, so all of it will be replaced,” Cruz said.

Cruz added that existing rocks will be used to buttress the roadway. “Yes, many are being mined from the body of the slide,” she said.

The slide, which followed a wet winter in the area, adds to multiple problems on the route that has not been fully passible for months.

Highway 1 also is known as SR-1 and Pacific Coast Highway. Mud Creek is about 2 mi. southeast of the small town of Gorda and 60 mi. south of Monterey and 9 mi. north of the San Luis Obispo-Monterey County Line. The slide cut off northbound travel to much of Big Sur State Park.

Big Sur is situated on a rugged stretch of California's central coast between Carmel and San Simeon. Bordered to the east by the Santa Lucia Mountains and the west by the Pacific Ocean, it's traversed by narrow, two-lane SR-1, known for winding turns, seaside cliffs and views of an often-misty coastline. The sparsely populated region is known for hiking, camping and beachcombing.

During the mudslide, debris fell from as high as 1,000 ft. above the highway, creating 16 acres of new beachfront that now extends 250 ft. beyond the shoreline into the Pacific. In 1983, a slightly smaller slide closed Highway 1 for more than a year.

In terms of the current slide, crews have assessed the soil at the site and radar equipment has been used to assess movement of the slide.

Crews also used drones to conduct aerial reconnaissance to formulate a strategy for repairs at Mud Creek. The first order of business is to ensure the slide site is safe enough to work on, Shivers said.

Prior to the decision to traverse the Mud Creek slide, Shivers reported that some of California's most breathtaking coastal scenery will be off limits for a year or possibly longer.

Mudslides have been a problem in coastal California, especially along the coast and in hillside areas where recent brushfires have stripped away vegetation. A variety of strategies have been tried to reinforce potential slide areas including use of wire mesh, rock curtains, plastic mesh reinforcement, rock-fill buttresses, retaining walls, concrete-filled pile walls and seeding of the hills above roadways.

“Most of these applications have been installed between Ragged Point and Monterey,” Shivers said.

Ragged Point is in the southern stretch of Highway 1 on the central coast. It is just north of San Simeon and Hearst Castle. Monterey is about 150 mi. north of Ragged Point.

Meanwhile, work has begun on replacing a SR-1 bridge located about 30 mi. northwest of Mud Creek at the north end of Big Sur. Winter rains and shifting earth caused the original Pfeiffer Canyon Bridge to crack and collapse. Caltrans reports that the new bridge should open in mid- to late September.

The Pfeiffer Canyon Bridge project will cost $24 million. Caltrans has been working on an expedited schedule to complete the new bridge on the scheduled date.

The original bridge, built nearly 50 year ago, was demolished in May and crews are installing a single-span, steel girder bridge in its place.

On July 28, Caltrans announced that the first steel girders for the new bridge were being trucked in from a paint yard near Stockton, Calif. A 15-truck convoy brought the girders to the Pfeiffer Canyon Bridge site. Each truck was escorted by the California Highway Patrol as it carried a 62-ft., 62-ton steel girder.

Contractor for the bridge project, Golden State Bridge of Benicia, Calif., will use the bridge-launch or roller-launch installation method to slowly slide the heavy, 15-girder completed bridge into place.

“I have not seen a number about the amount of debris which came down,” Shivers said.

But some construction equipment was at the repair site in July. “Other than large trucks and backhoes, I'm not sure about other equipment,” Shivers added.

Projects for Caltrans range from as large as 125,000 tons of asphalt while smaller county, city and private projects vary in size. The company also is no stranger to earthwork and trucking, performing dirt moving projects that have involved 500,000 cu. yds. of material.

The Pfeiffer bridge, Mud Creek and Paul's Slide projects are not eligible for FEMA funding, but each will likely qualify for Federal Highway Administration reimbursement.

“FEMA does not reimburse on bridges and the other two incidents occurred outside the funding window, which they created,” Shivers said.