Caltrans: Initial Fixes on RSR Bridge Due to Complete in July 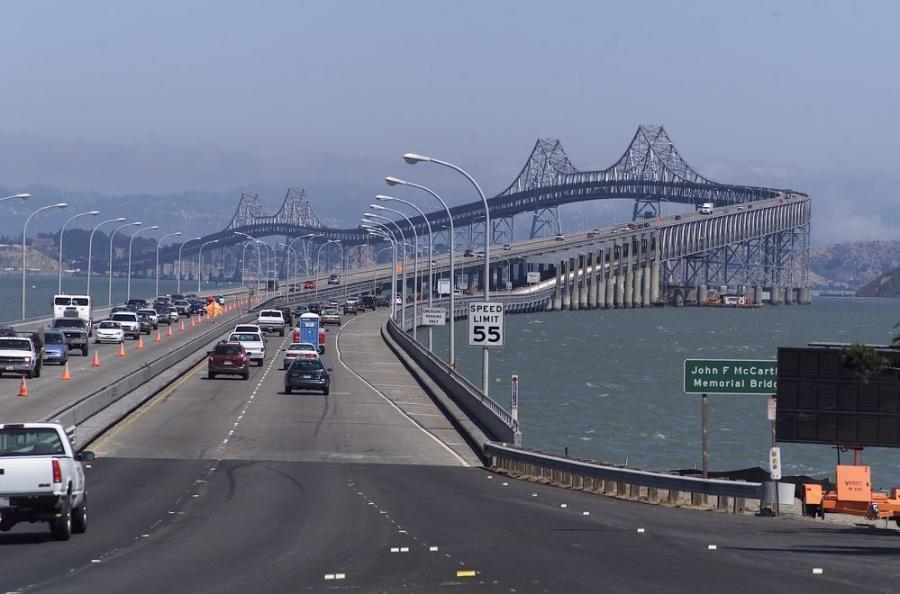 Opened in 1956, the Richmond-San Rafael Bridge utilizes two decks to carry traffic across Interstate 580 and connects San Rafael in the west to Richmond in the east. (Caltrans photo)

It's never good when crumbling concrete falls off an aging highway bridge, but particularly so on one that crosses a portion of San Francisco Bay, one of the busiest traffic corridors in the world.

The structure in question is the 5½-mi.-long Richmond-San Rafael Bridge, the northernmost of the Bay's five crossing points. Opened in 1956, it utilizes two decks to carry traffic across Interstate 580 and connects San Rafael in the west to Richmond in the east. 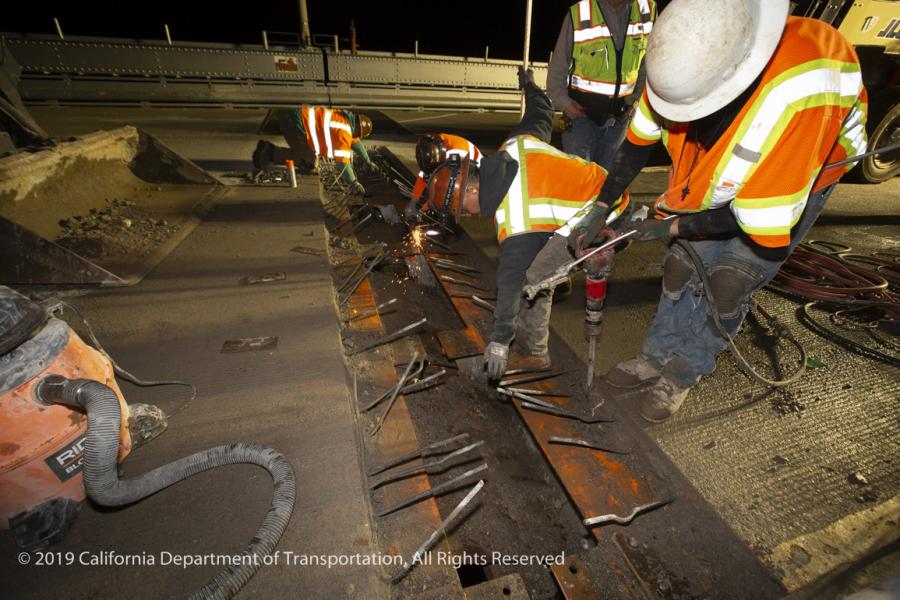 Although not as well known as the more handsome Golden Gate Bridge a few miles to the west, the dual-cantilever RSR bridge has become a workhorse for moving people and freight in the Bay Area. Though lacking in style and elegance (many area residents consider it ugly), the RSR Bridge nonetheless is an important and utilitarian structure that has seen a continuing rise in the number of vehicles crossing it each year.

Understandably, then, commuters using the toll bridge were more than a bit upset on the morning of Feb. 7 when pieces of concrete, some as big as footballs, fell onto the lower deck of the RSR structure. Some motorists were so agitated that they turned their vehicles around and drove against the traffic to get off the bridge.

Commuters had to seek other routes to reach their destination that morning, in part because the California Highway Patrol quickly closed the bridge in both directions for nine hours as inspectors and engineers from the California Department of Transportation (Caltrans) assessed the damage.

Experts quickly determined that spalling — concrete that flakes or breaks up, most likely due to the bridge's age and the Bay Area's often harsh weather — had caused the deterioration along an expansion joint near the bridge's eastern end. Other likely factors include the constant vibration and wear-and-tear on the grizzled old bridge. Each of the probable causes for this incident has done damage to the RSR structure before. 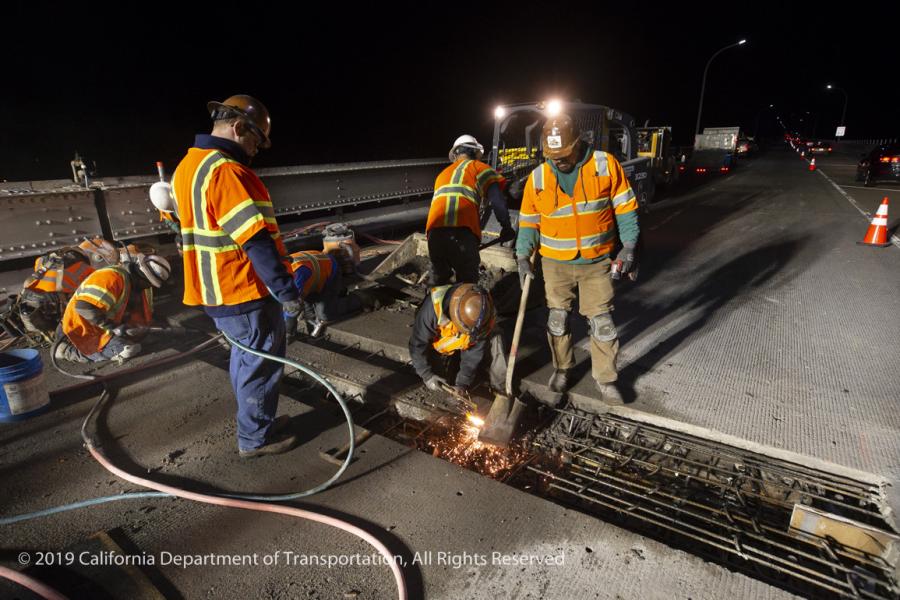 Shortly after the February accident, Caltrans announced that crews would immediately begin replacing a total of 31 joints on the upper deck of the structure, with a mid-summer completion, before replacing another 30 joints on the lower deck later in the year.

According to Vince Jacala, a public affairs officer for Caltrans in nearby Oakland, contractors were dispatched to the site to perform a temporary joint repair, while also starting an emergency project to replace the broken bridge joint entirely.

"Caltrans performs regular inspections of all its structures and these joints were inspected last year," he explained. "All joints were inspected again out of an abundance of caution after the spalling occurred February 7. While there were no issues identified with any of the other joints, it was decided to proactively replace the remaining 60 sliding plate joints that date back to the original construction of the bridge in 1956."

Rainy weather in late February and into March, though, delayed the start of concrete work on the RSR bridge, Jacala said, but he added crews were able to make up for lost time and have stayed on track to finish the construction in July, as originally planned.

Veteran Engineering Contractors on the Case

O.C. Jones & Sons, the respected engineering contracting firm based in Berkeley, was chosen to make the needed fixes on the bridge, with Bridgeway Civil Contractors in Vacaville working as the subcontractor. 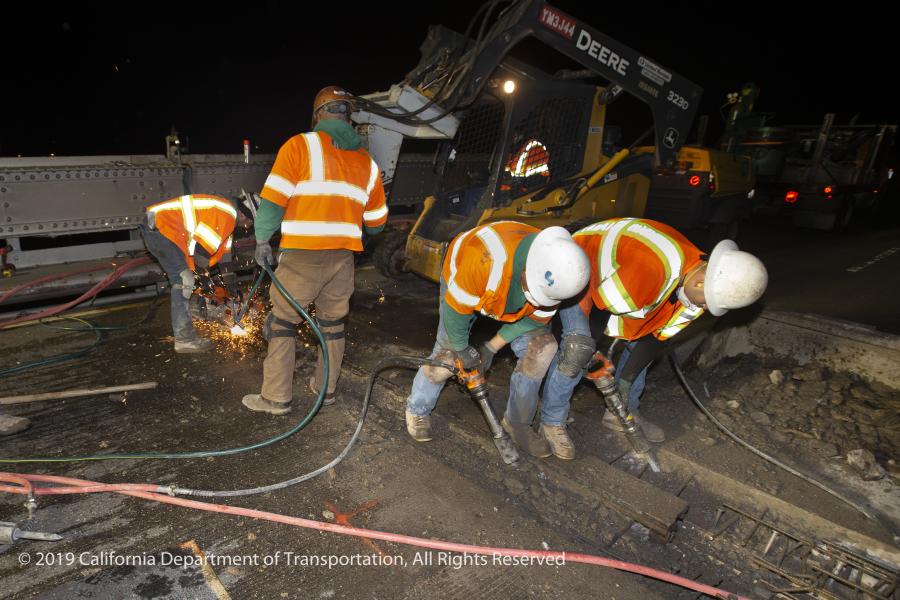 For the emergency fix, an average of three full crews are working to install and weld the new joints onto the bridge. Light towers also are on hand to allow them to do their nighttime work, ably assisted by Kubota SSV75 skid steers to haul materials to where they're needed.

Jacala estimated the contract for the joint replacements and repairs to be $8.3 million — a relatively modest amount, perhaps, but a newsworthy one if it keeps the busy interstate running smoothly over the Richmond-San Rafael Bridge.

One of two traffic lanes remain open during the nighttime construction hours, Jacala added, when there is the least amount of traffic. No daytime work was planned so the heavy workday commute over the bay would not be interrupted.

"On any construction project, we work with safety and traffic impacts to the public at the forefront of our minds," he said. "This bridge is heavily relied upon by commuters so we've limited work windows to overnight from 9 p.m. to 5 a.m., which does limit how quickly we can get all of the work done. The contractors, though, are making great progress and are replacing at least two joints in total per week — often more — while getting started on additional joints." 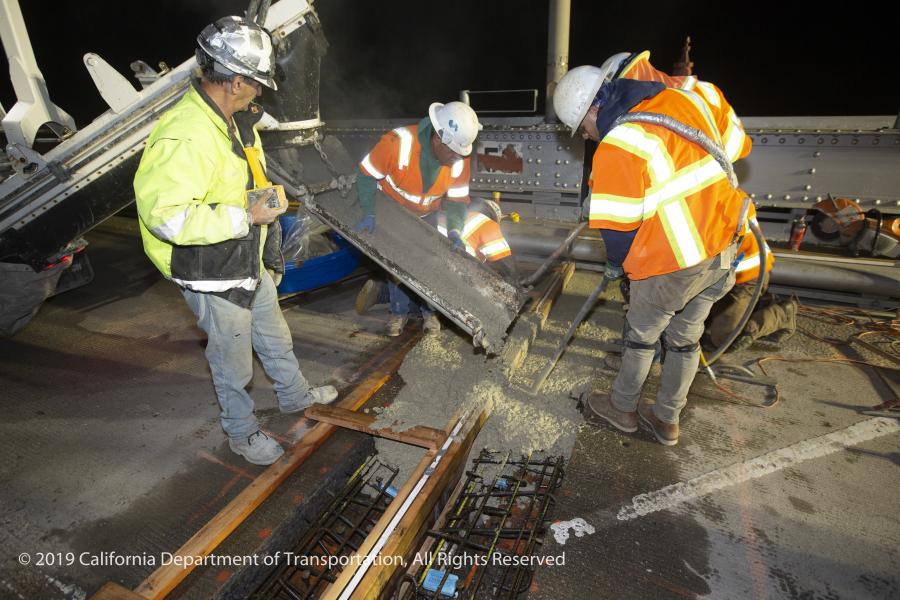 The sliding plate joints are made up of a large "C" channel cast into each side of the concrete deck joint with a steel plate welded to the top of one of the "C" channels, Jacala explained. These joints are designed for thermal expansion and contraction — a key engineering feature for any bridge in San Francisco Bay where winds and temperature changes are capricious.

In late May, Jacala reported that 22 of the 31 joints on the upper deck had been replaced and he anticipated no problems in getting the first portion of the two-phase project completed in just a few weeks.

Within the next year, the other 30 joints on the bottom deck will be replaced as part of a planned maintenance project funded by the Metropolitan Transportation Commission and the Bay Area Toll Authority (MTC/BATA).

The MTC serves as the transportation planning, financing and coordinating agency for the nine-county San Francisco Bay Area. It works closely with BATA to fund and maintain the seven state-owned toll bridges in the region.

In the early 2000s, Jacala explained, the MTC/BATA funded work that seismically retrofitted the Richmond-San Rafael Bridge and made rehab improvements to the structure. That project included the replacement of 97 percent of the original joints (in total, there are more than 800 joints connecting the bridge segments). At that time, the 61 sliding plate joints that are the focus of today's restoration were determined to be in good condition and did not need replacement. CEG