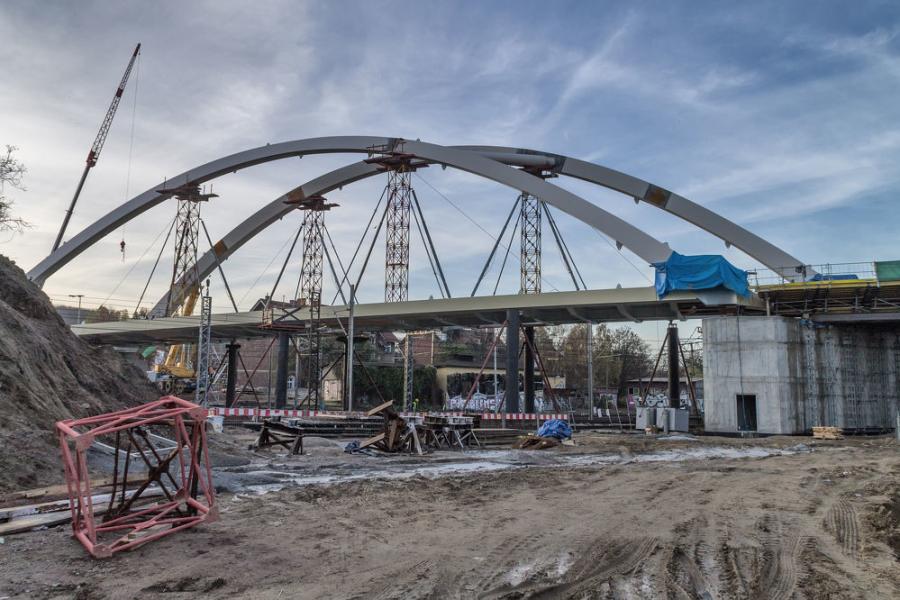 Construction industry leaders, including Stephen Sandherr, CEO of the AGC, want to see the nation’s roads and bridges benefit from a major infusion of multi-year funding in the next relief package being ironed out by Congress.

The Coronavirus Aid, Relief, and Economic Security (CARES) Act signed by President Trump is a shot in the arm for parts of the U.S. construction industry. The $2 trillion funding package passed by Congress in late March designates billions of dollars for potential construction of hospitals, airports and transit systems. It is hoped the next relief package, being ironed out at press time, will boost road and bridge construction in a major way.

Ken Simsonson, chief economist of the Associated General Contractors of America (AGC), said the CARES Act includes "a variety of measures to help businesses stay afloat and retain employees. Construction firms have been among the beneficiaries, but the industry and the economy need more."

Contractors quickly signed up for loans through the Act's Paycheck Protection Program (PPP). In fact, 74 percent of respondents to a weekly AGC member survey reported they had applied for a PPP loan or intended to do so. AGC found that of those contractors who have applied for a PPP loan, 10 percent had actually been approved, and 54 percent were awaiting an answer on approval or rejection.

"However, the loan fund has reportedly been exhausted already, and many firms may not receive as much as they need, or any" funds, said Simonson. "Accordingly, AGC is lobbying Congress to quickly agree on expanding the program."

Other programs under the Act's umbrella, such as the reinstatement of net operating loss carrybacks and payroll tax deferrals, are helping some companies. However, they only benefit select firms that meet specific program terms, according to the AGC economist.

"In our April 6-9 survey, 48 percent of respondents call for more funding for loan programs to maintain cash flow," said Simonson. "There is also significant support for a larger federal investment in highways and other infrastructure."

Once the COVID-19 pandemic hit, many states called for delays in new construction projects scheduled for this spring and summer. Other states have stopped ongoing projects altogether. In the AGC survey, 27 percent of respondents reported that some government entity had ordered them to stop current or planned construction projects. Likewise, 53 percent said a project owner stopped the project, while 65 percent reported they'd experienced project delays or disruptions. And, 42 percent stated that some suppliers or subcontractors have notified them that deliveries would be late or canceled. 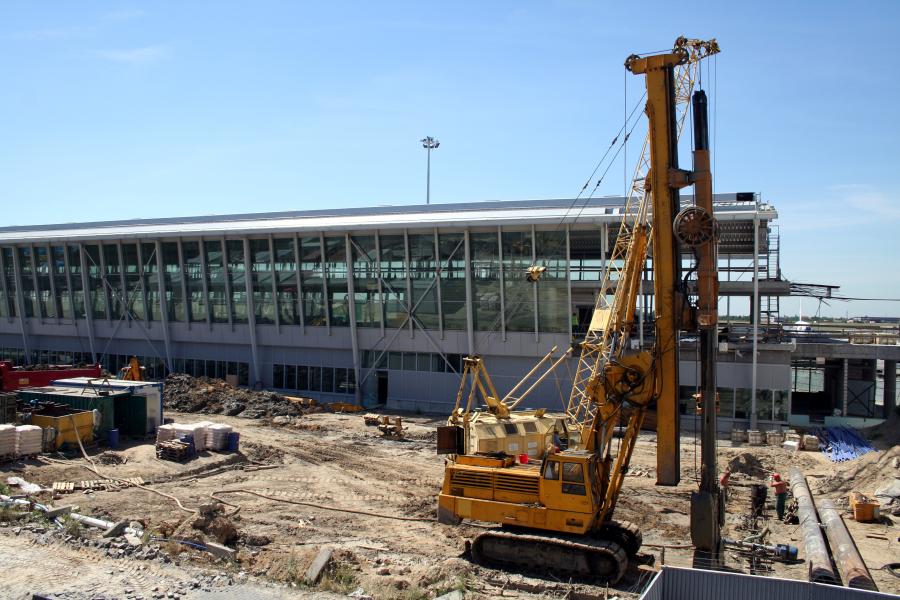 The early April weekly survey asked AGC members, "Are you working on any new or expanded construction as a result of the pandemic?" Surprisingly, in the midst of jobsite shutdowns, 18 percent of those surveyed responded in the affirmative.

Simonson mentioned a few positives in the COVID-19 crisis. He noted a "small number of new projects" have been undertaken to respond to the crisis, in the healthcare, manufacturing and lodging sectors. Some highway and airport work has actually ramped up as traffic declines, reported Simonson, and substantial price reductions for fuel and other commodities are another bright spot.

Under the CARES Act, contractors and suppliers may benefit from investments in new or existing projects. In a blog about the effects of the virus and the CARES Act on the construction industry, New Orleans-based construction payment service Levelset writes that contractors could see a sharp uptick in jobs as infrastructure and hospital projects get off the ground quickly. And, in states where construction is shut down, the CARES Act could reinvigorate projects in critical industries.

Airports all across the country are experiencing construction windfalls as a result of the pandemic-aid bill approved by Congress. The state of Alaska was awarded $124 million, and the state has already decided most of its share will go to state-owned facilities. Municipal airports will share about $42 million, according to the Anchorage Daily News.

The Federal Aviation Administration will dole out $10 billion to regional, national and international airports across the country to "allow critical safety and capacity projects to continue as planned regardless of airport sponsors' current financial circumstances," the agency said. The distribution is based on how many commercial passengers and cash reserves an airport has versus debt payments.

"With those dollars, we're putting construction companies to work, and they sub out various projects," Ralph Gibbs, manager of Alaska's Merrill Field in Anchorage, said. He believes it makes sense to think of the money as an economic booster shot, and said he's "already started talking to my contractors saying, "Get ready, because the money's coming," Gibbs said.

Part of the money replaces an airport's cost share of federal grants for improvements. This replacement ensures critical safety and capacity projects continue despite an airport's current financial circumstances. Memphis International Airport, Memphis, Tenn., will receive $24.6 million, reported the Daily Memphian. Ongoing projects there include modernization of the B Concourse, construction of an airfield support facility, and a centralized deicing facility.

The Minneapolis-St. Paul International Airport will get $125 million in federal money. Part of that allocation will be used to move construction projects forward. The Star Tribune reported that work will continue on airport improvement projects, including expansion and modernization of the Terminal 1 ticketing and baggage claim area.

Mark Evans, a partner, with the Cincinnati, Ohio, law firm of Bricker and Eckler Attorneys at Law, reported that the CARES Act appropriates funds for construction projects related to fighting COVID-19 and treating victims of the virus. Some $156 million is earmarked for construction, demolition, renovation and acquisition of equipment for vaccine and infectious disease research facilities used by the National Institute of Health.

About $100 billion will be set aside for emergency grants to hospitals. The CARES Act allows the money to be used for new construction projects to increase patient capacity, according to Levelset. And $3.5 billion will be earmarked for Biomedical Advanced Research and Development Authority that "may be used for the construction or renovation of U.S.-based next generation manufacturing facilities, other than facilities owned by the United States Government."

And $150 million will be designated for "to prevent, prepare for and respond to coronavirus, domestically or internationally, including to modify or alter existing veteran hospital, nursing home, and domiciliary facilities."

The Next Big Break

Many in the highway and heavy construction sectors are calling for the next round of federal COVID-19 relief funds to include major funding for U.S. infrastructure. Ray LaHood, former transportation secretary under President Obama said, "it's got to be big, it's got to be bold." Co-chair of the Building America's Future coalition, LaHood said federal funds could finish state projects that are under way or ready to start.

Stephen Sandherr, CEO of the AGC, said, "Congress has provided the industry with a much-needed lifeline that will help firms and workers over the coming days and weeks, but the industry will not be able to truly recover until federal officials pass measures designed to stimulate new demand for construction, make contractors whole for losses incurred because of the coronavirus and protect employee retirement and health plans."

In a letter to Congressional leaders he cautioned that the size of the COVID-19 outbreak means more needs to done to support the construction industry. He urged Congress to take up measures to bolster infrastructure nationally, compensate contractors for losses on federally funded projects due to delays or cancellations, and take action to protect the retirement and health plans of construction workers in multi-employer pension programs.

House Speaker Nancy Pelosi (D-Calif.) wants to see another round of legislation that goes "from emergency mitigation to recovery" and addresses infrastructure in the process. Sandherr agreed that there's a need for additional legislation to "facilitate long-term recovery." He wants to see multi-year surface transportation and water resources infrastructure funding included. CEG