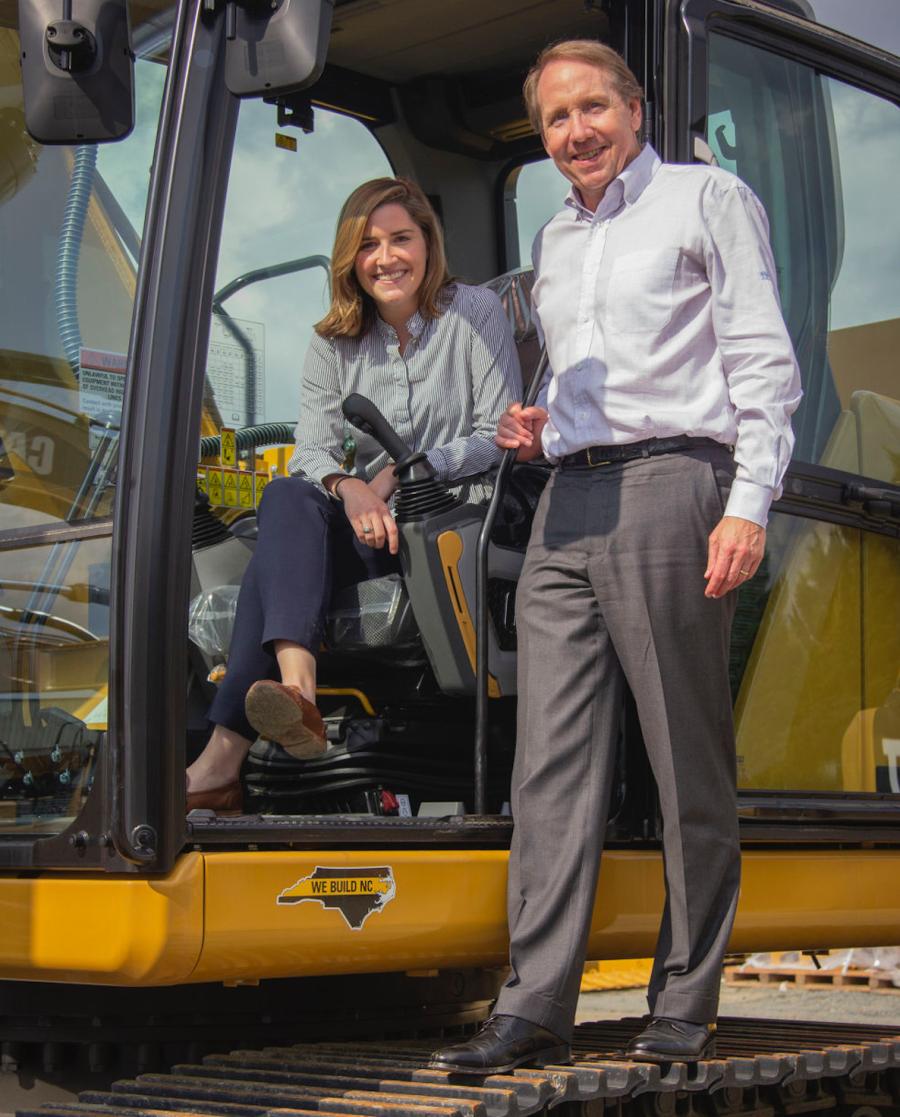 From its headquarters in Charlotte, Carolina Cat (CTE), formerly known as Carolina Tractor & Equipment, is one of those rare jewels of American business: a family company founded during the "Roaring Twenties" that has achieved immense success without being acquired by a larger conglomerate. 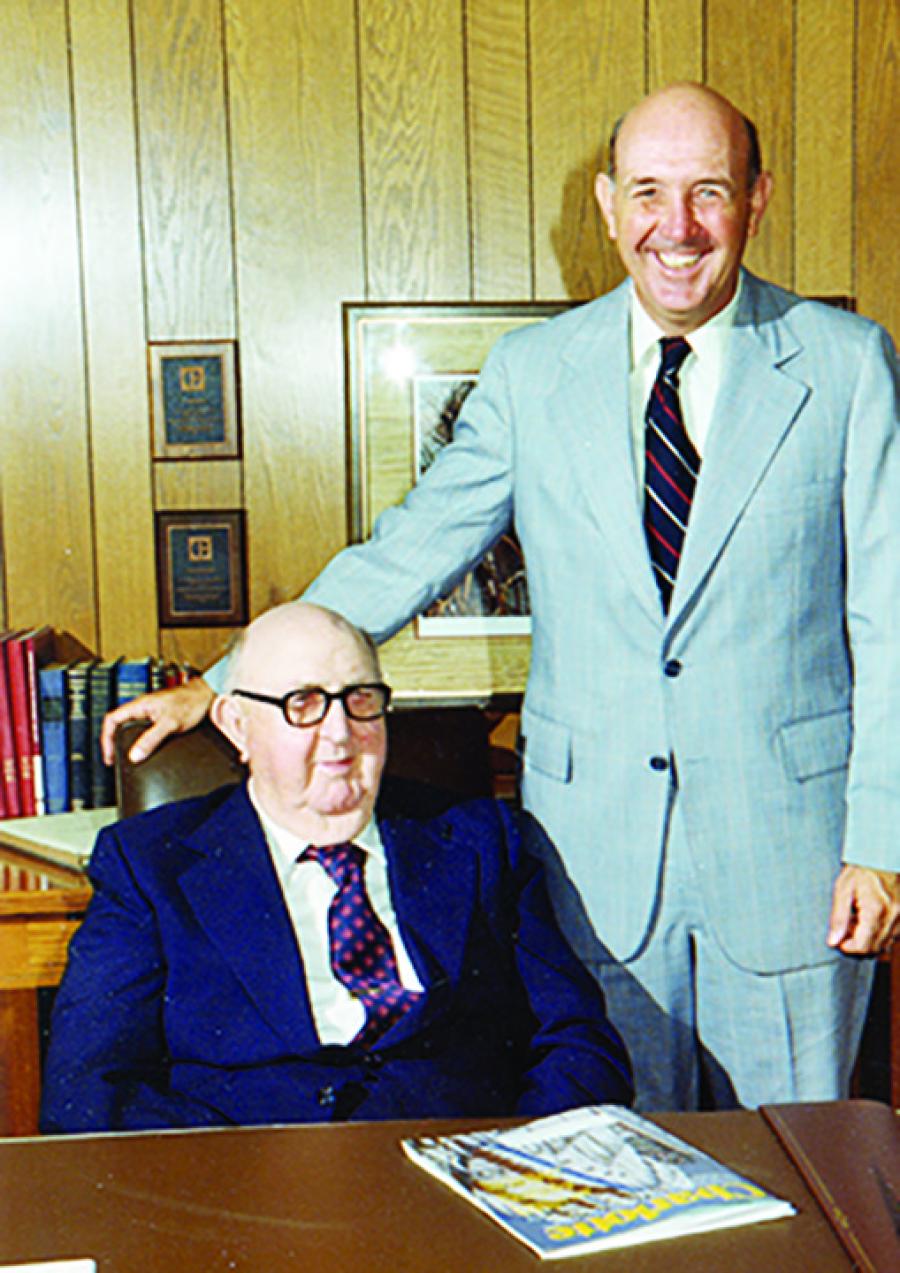 Founded in December 1926 by Les Weisiger with a commitment to help grow the Carolinas by supporting the region's construction, roadbuilding, utility and mining industries, he could not have realized at the time that in 2022 his family not only still runs it, but has grown the business to such lofty heights.

In fact, the company is managed by the family's third generation, with a fourth generation now being groomed to one day own and operate it.

But it all started with a fledgling equipment supply company 95 years ago that is now recognized as one of the Southeast's best full-service construction equipment dealerships.

From its nine branches in western and central North Carolina (three in Charlotte, and one each in Asheville, Boone, Sylva, Hickory, Greensboro and Monroe), Carolina Cat supplies parts, service and sales of construction equipment, power generation and on-highway trucks. It also is a proud member of Caterpillar's dealer network.

Today, Les Weisiger's grandson, Ed Jr., serves as the company's president and CEO. As he tells it, Carolina Cat was born from a combination of his grandfather's skills as a civil engineer and contractor, along with his desire to build in poor, rural areas underserved by passable roads.

"He had gone to school to become a civil engineer back when nobody went to college," said Weisiger. "When my grandfather went to work for the South Carolina highway department, the region was beginning to invest in and build paved roads due to a lot of bills being introduced in the late 1910s and early '20s. Then he became a contractor, recognizing that there were more roads that could be built than the state could construct. He was pivoting from one successful career to take a risk based on the opportunity he saw." 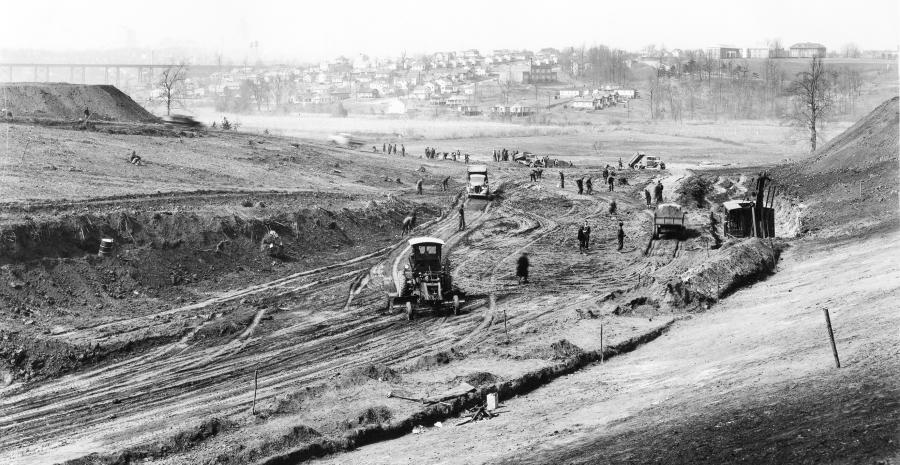 The younger Weisiger added that his grandfather later moved into the construction equipment business when he recognized that the same mechanization process that had proved so successful in making automobiles was just starting to be used in the manufacture of earthmoving machines.

"Before machines, building a road was arduous work using mules, drag pans, pickaxes, dynamite and things like that to get a project done," he said. "My grandfather saw that the equipment business looked like an interesting place for an entrepreneur to be, and that is how he got into it."

Weisiger is unsure exactly how Les became aligned with Caterpillar in 1926, but he said that he believes it was because his grandfather was betting on something that he had faith in following Cat's formation a year earlier with the merger of Holt Manufacturing and the C. L. Best Tractor Co.

With the onset of the Great Depression, though, the elder Weisiger, along with the rest of American business, was presented with a formidable set of challenges that many companies simply could not overcome.

"We talk all the time about how we at Carolina Cat want to be trailblazing and sell more to our customers because we know them and understand their needs," Weisiger said. "In the 1930s, that was done out of necessity. One of the stories that we tell is that my grandfather sold milk bottle caps, washing powder and other things at CTE in addition to earthmoving equipment. That was what his life was like then."

But his granddad's wager on becoming a Cat distributor paid off when the manufacturer rapidly expanded across the globe before World War II and continued to do so during the years afterward.

Following the Allied victory in 1945, the United States experienced unprecedented prosperity and began a long economic growth spurt. In addition, returning soldiers needed homes in which to raise families and, in the 1950s, with the backing of President Dwight Eisenhower, the interstate highway building program was started.

Weisiger said that both efforts, "not only economically supercharged this country but equipment sales in general." 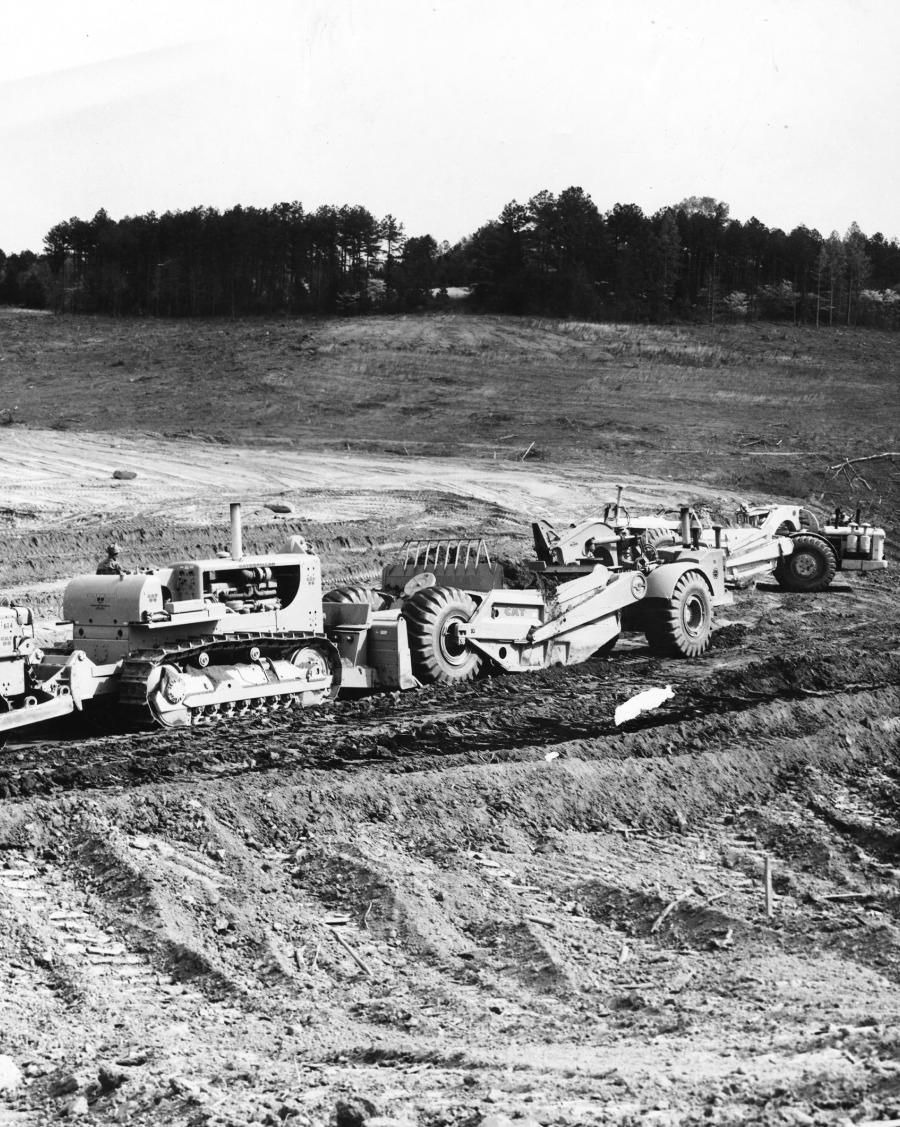 The post-war period also provided Carolina Cat with new opportunities to build on its success as Les Weisiger began adding people and branches.

"As Caterpillar expanded its product line, that helped us not only with contractors but in selling truck engines, lift trucks, power generation equipment and other things that came from applying the diesel engine to lots of different uses," his grandson said.

By the 1950s, Les's son, Ed Sr., had joined his father in running Carolina Cat. His talents, said Ed Jr., were firmly rooted in building relationships with customers.

"He loved people, but he also recognized that the contractors, who were providing most of the highway work, were the ones you wanted to get close to, and he did that, as well as getting to know their families," he said. "Few of the contractors of that era were national, or even regional; instead, they were local. So, my father had to know all the contractors in every town or city that did this type of work."

After working summers in the company's warehouses since he was a teenager in the 1970s, Ed. Jr. came aboard CTE full time in late 1987 following his undergraduate days at North Carolina State University and graduate studies at Boston's Harvard Business School (HBS).

As the third generation Weisiger to run the family business, he is very aware of the legacy that his grandfather and father established in building Carolina Cat. He has made it his duty over the past 30 years to be a keeper of the stellar reputation the company enjoys among its customers. 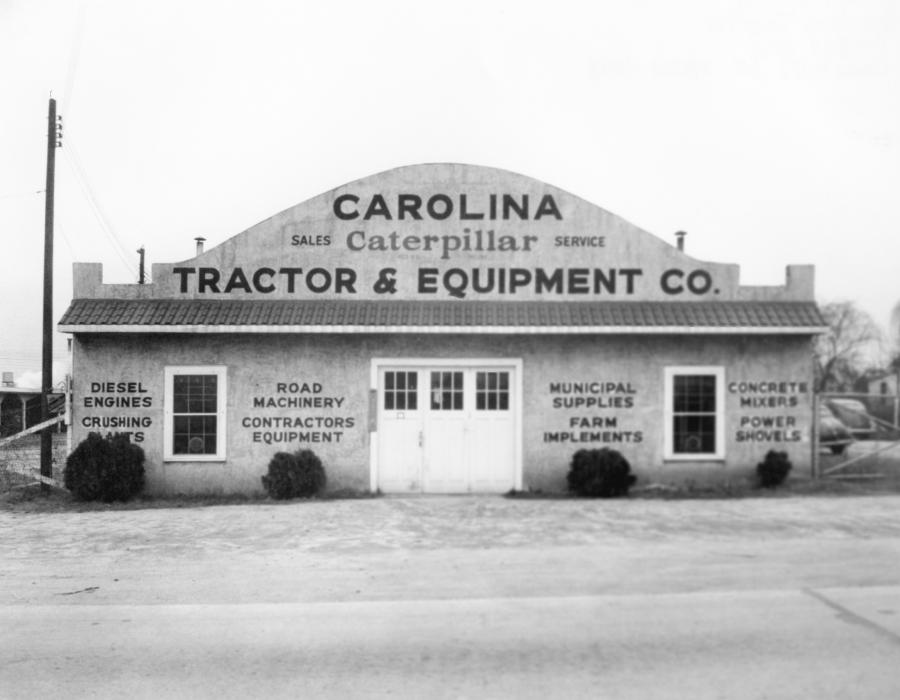 "We can afford to lose money on a particular transaction, even lose money for a year or so, but we cannot afford to lose our reputation," he said. "That is our stock in trade and the thing that people believe in about us."

Ed Jr. also is busy instilling the company's values into his children, including daughter Amanda Weisiger Cornelson, who may one day assume his role in running the company. After working and learning in a variety of divisions within CTE, she currently handles the dealership's financial planning and analysis (FP&A) but will soon move into a sales role in the second quarter of the year.

Her father noted that Cornelson and other family members have long been prepared to be good shareholders of the company, but they also must learn to be good managers or leaders if they want to play an active role.

"Anybody in our family can be an owner, at least for some period, but not everybody can or should be a leader because that is a calling, and if you are really going to care about people that work for you, it must be a mindset," Weisiger said. "That is what Amanda is learning."

Repeatedly, the dealership has shown its loyalty to those who buy and rent equipment and, in turn, helped them to relate more easily to the dealership and its line of Caterpillar products. 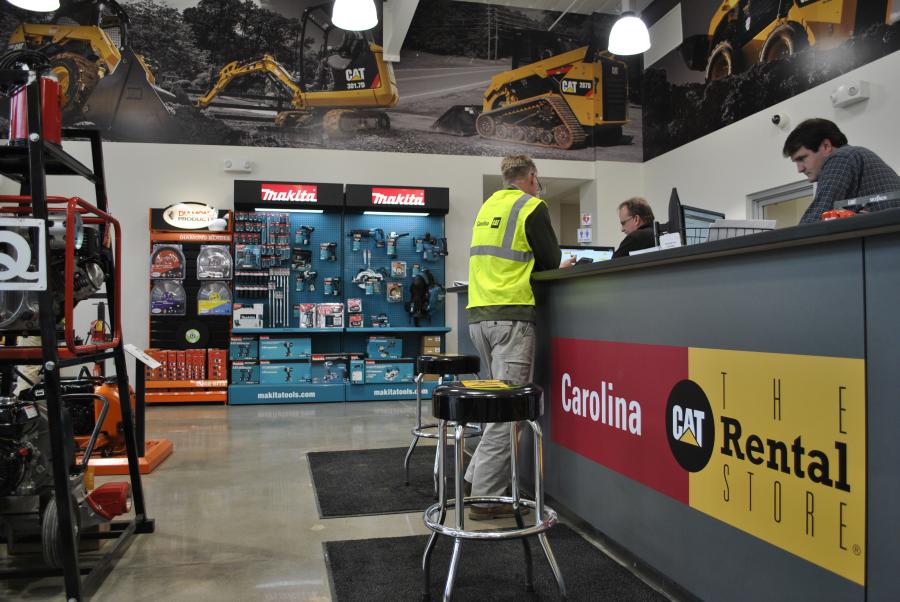 Carolina Cat has done so by investing heavily in building and updating its branches to be modern facilities designed to suit the needs of its customers. Each branch offers new and used equipment, complete parts departments, rental counters, and full-service service bays and field trucks — all for the benefit of the contractors to keep their downtime to a minimum and maximizing their uptime and profitability.

In addition, the Charlotte-based dealership recognizes that its customers consider A+ product support to be a critical element of any construction equipment dealer. With that in mind, the company has exceeded standards with the number of parts and service vehicles it keeps on hand.

"I think that, uniformly, product support is where Cat and its dealers have come together for success, due to Cat being able to supply the parts, and our possessing the parts and labor for the customer," Weisiger said. "I feel confident in telling people that we are their best bet in after-market product support."

Ability to Problem-Solve Proved Essential in 2020

Among the many takeaways from Weisiger's time at HBS that could apply directly to his business was how to solve problems and make sound decisions, the primary role of anyone running a large equipment dealership, he said.

"You are taught how to deal with reality if you are a decision maker, something we ask of our managers as well. We prefer not to sugarcoat things or sweep problems under the rug. That means we must make determinations based on data and on facts, but first and foremost, we must decide and then act."

As an example, Weisiger pointed to March 2020 when the coronavirus was starting to rage across the planet. People were getting sick, many more were staying home, and uncertainty was hanging over everything, including commerce.

"At Carolina Cat, we didn't know what the coronavirus was all about or how bad it was, but we knew we had to come together as a leadership team and figure out how we were going to make decisions because we knew that certain parts of our business could be shut down," he said.

"What we did want to do was have a set of running rules with which to make decisions amid this uncertainty," Weisiger added. "To begin with, we needed to look after the health and well-being of our employees to the best of our abilities. Secondly, we had customers out there that still depended on us, so we continued to do a good job of serving them the best that we could under the circumstances. Next, we felt like we needed to say, ‘We cannot lose the confidence of the people that provide capital to our business,' so we decided to make sure that even if we had to make hard choices, we would do so in the context of balancing the needs of each of our self-imposed running rules."

Lastly, Weisiger explained that it was essential to the business to stay focused on thinking, "We are not going to shut down all our projects; we are going to continue to invest in our future because there is going to be a future post-Covid.

"We shared those four rules with our employees several times because in that uncertainty there was lots of angst, and we wanted to see to it that we tamped down people's stress and anxiety, [assuring them] that everything was going to be okay," he said.

In the end, these critical decisions have allowed Carolina Cat to mark its important anniversary, leaving every reason to believe many more decades are ahead for the company. CEG