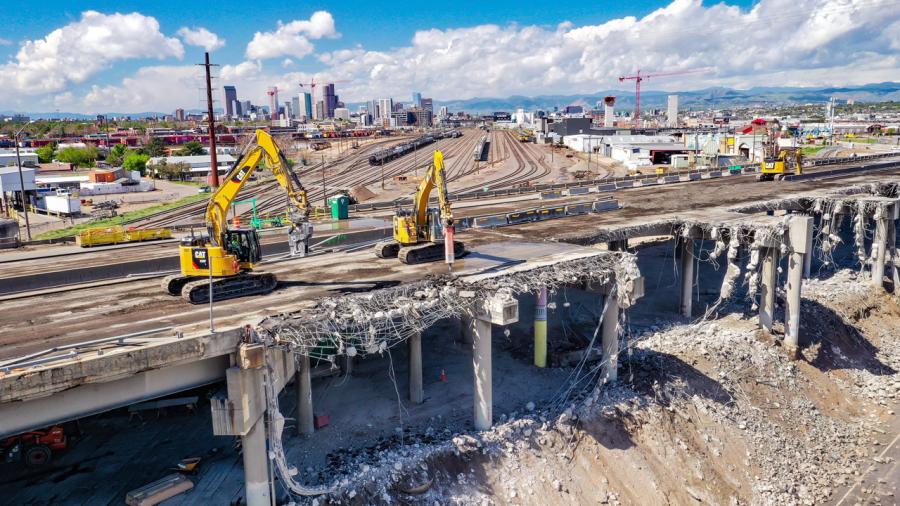 Construction crews have created a new and permanent alignment on westbound I-70 between Brighton and Colorado boulevards, marking the project one step closer to substantial completion. (Denver 7 photo)

The Colorado Department of Transportation's Central 70 Project has successfully completed the last major milestone on Interstate 70, which marks the end of major construction impacts on the roadway. There is now a new and permanent alignment on westbound I-70 between Brighton and Colorado boulevards.

"There was never a doubt that the main goal of CDOT was to complete the Central 70 project within budget and on schedule and we are on track to do that," said CDOT Executive Director Shoshana Lew. "We are grateful for the public's patience as we work to complete this critical project. Our number one priority is to deliver a high-quality product to the people of Colorado. Having I-70 in its final configuration now allows motorists to safely travel along the corridor and let crews focus on completing the 4-acre cover park above the interstate."

Central 70, between I-25 and Chambers Road, is one of Colorado's economic backbones. It is home to 1,200 businesses, providing the regional connection to Denver International Airport and carrying upwards of 200,000 vehicles per day. Since the project's groundbreaking on Aug. 3, 2018, I-70 has undergone a complete reconstruction. A total of 19 bridges have been constructed. Many of the bridges were removed and replaced and some were newly built, including the Union Pacific Railroad bridge, BNSF Railroad bridge and all of the streets that are now above I-70 in the lowered section.

The Central 70 Project has reconstructed 24 ramps, bringing them up to today's safety standards, including extending acceleration and deceleration lanes which will help to reduce crashes as motorists come on and off the interstate. This 10-mi. stretch of I-70 now also has wider shoulders, or in some instances brand new shoulders, for motorists to safely pull off the interstate in case of an emergency.

The most dramatic change to this stretch of I-70, however, was the removal of the viaduct between Brighton and Colorado boulevards. For the first two and a half years of the project, crews worked diligently next to the viaduct to excavate and build out the future westbound half of the lowered interstate. In May 2021, crews switched into a temporary configuration in the new lowered section as a part of the Mile High Shift. This configuration allowed crews to demolish the existing viaduct, which was completed within four months, and excavate and build the eastbound half of the interstate. More than 2.4 million cu. yds. of soil was excavated.

"More than seven million hours have been dedicated to building this project," said Lew. "It has been incredible to watch this project come to life after an over 15 year study period. CDOT is proud of the partnerships we have developed with the Central 70 Project Developer Kiewit Meridiam Partners, the city and county of Denver, Northeast Transportation Connections, WORKNOW and our many dedicated subcontractors to make this project successful. It has been a long time coming and we hope the public will enjoy the many safety improvements that come with the reconstruction of the corridor as well as the trip time reliability when the Express Lane tolling comes online in early 2023."