Challenges and Solutions on I-880 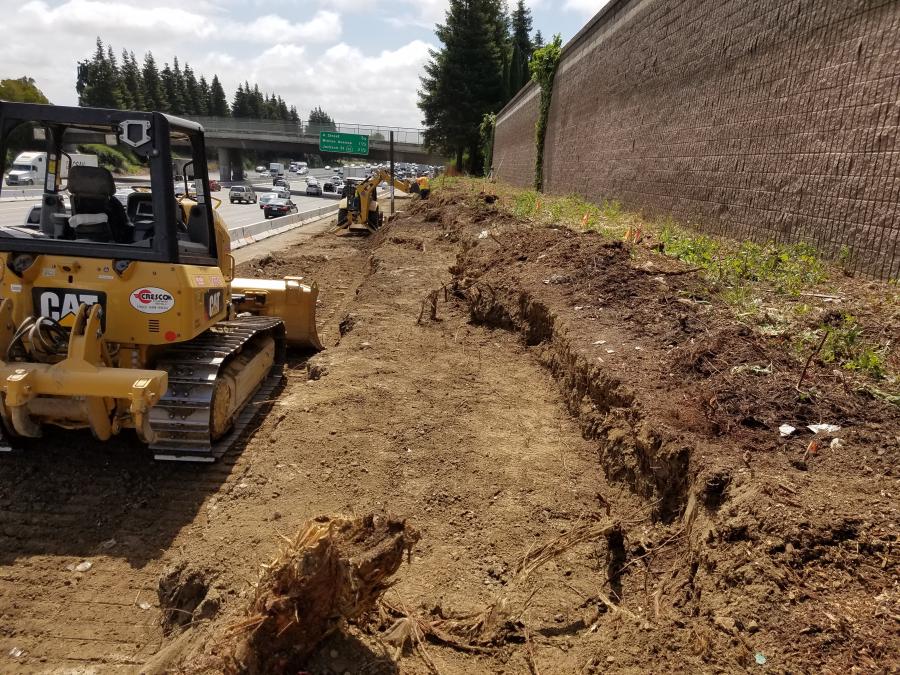 Bay Cities Paving & Grading Inc. is on target to deliver the Metropolitan Transportation Commission's (MTC) $139 million I-880 express lanes project between Oakland and Milpitas in late summer, an initiative that will create 45 mi. of new express lanes.

Close to three miles of new lanes were constructed by Bay Cities at three locations, which also installed overhead sign structures, new drainage improvements, retaining walls and weave/merge lanes areas to help people get in and out of the express lanes.

The existing I-880 HOV lanes are being converted into express lanes, and that involves restriping lanes and installing lighting, sign structures, signs, FasTrak toll tag readers and other tolling technology, traffic monitoring video cameras, a data communications network and CHP observation areas. The road widening that created merge lanes between the express lanes and the general purpose lanes is being coordinated with Caltrans, including the replacement of the median barrier on I-880.

Bay Cities has completed the capital construction elements, and the remaining items include the permanent striping, which began on June 1, and the removal of temporary signs that are being replaced with permanent signage for the express lanes along the sides of the highway and on the overhead sign structures.

An added challenge for the excavation of the new lanes was the lead contaminated soil.

"There was a misclassification of it and we approached BAIFA to re-test and classify a lot of the soil," said Nott. There were three types of roadway excavation — regular clean dirt, ADL with a lower amount of lead that can be reused or taken to a common facility and Type 2 ADL, which has to go a hazardous material facility and we only have one in California — Buttonwillow, near Bakersfield. We had to change our methods. Instead of digging it out, we had to break it up and dispose of it according to the new test results." 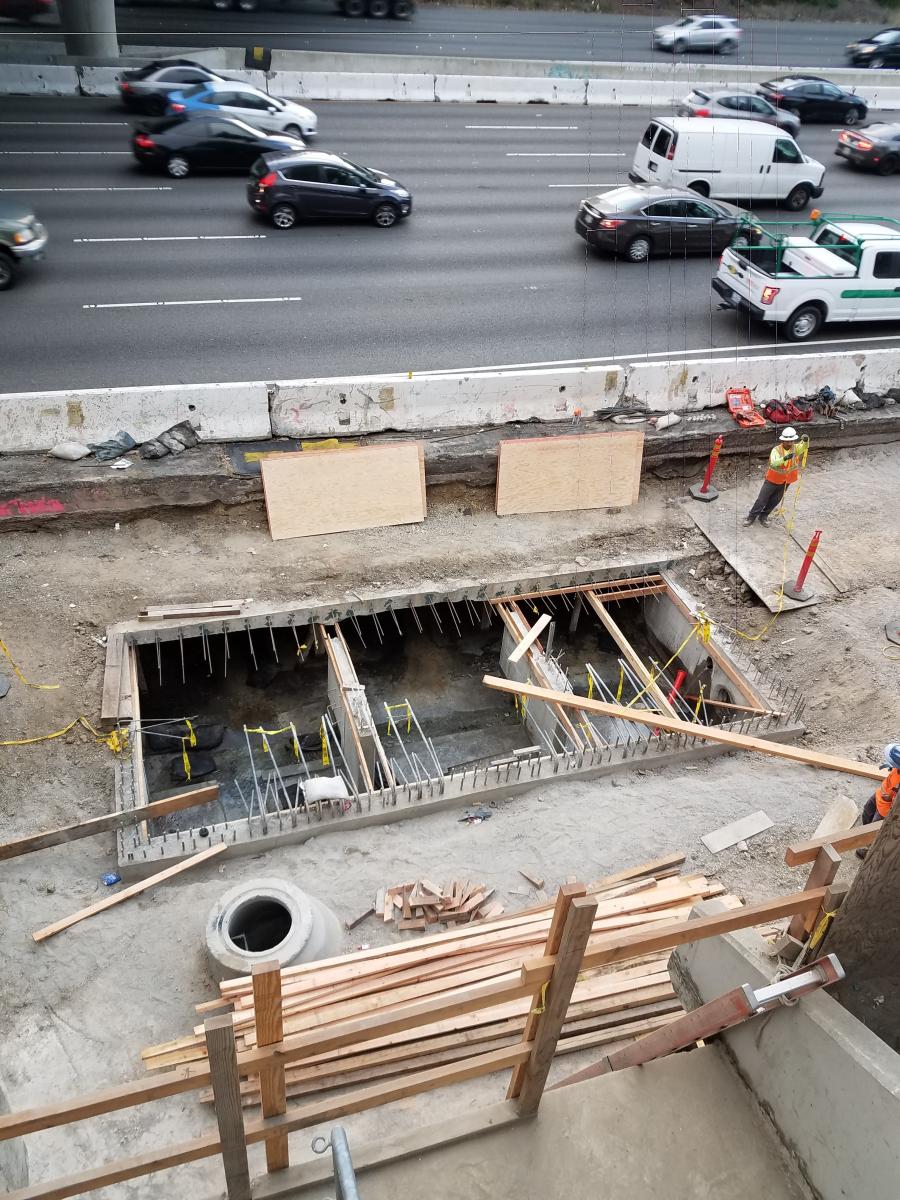 After excavating each section, crews would install the new drainage infrastructure and place the subbase, lean concrete base and asphalt surface. The three widening sections were spread out over a large area and each one had different milestones.

"There were times when we would work at two locations at the same time," said Nott. "The crews developed a good rhythm."

‘They were full of debris and trash and they pump station did not function properly," said Nott. "This created some flooding and we spent a lot of time cleaning both structures out to get them somewhat functional so that we could continue our work. We had to do an extension of the storage box. In many ways, this job turned out to be an almost complete design change around the existing facilities."

The restriping operations went smoothly, as did the installation of the overhead signage structure and new lighting systems and poles. This work was often coordinated with TransCore, which installed the FasTrak toll tag readers and other tolling technology, traffic monitoring video cameras, data communications network and CHP observation areas.

"It was straight-forward work," said Nott. "With the survey staking, we knew exactly where the center lines had to go and where to drill for the overhead signs and light structures."

Due to the limited hours for night work, extensive planning was required to maximize operations and clear the work sites for the morning traffic.

The project has been a challenging one for the general contractor, but solutions were found for those that arose.

"The biggest challenge was the unforeseen buried utilities," said David Nott, Bay Cities project manager. "There are a lot of existing Caltrans electrical and drainage systems that were either not shown on the plans or in the correct configuration. We had to modify some of the structures, and sometimes we had to go back to the designer to get their blessing for the modifications to change our plans. Other times decisions were made in the field by the inspectors on how to move forward. Finding out what was working or not was also a challenge — a lot of times we found out that they were abandoned. If they were live and functioning, we had to wait to proceed."

Day and night operations were a staple for the construction, especially for the overhead sign installation and the temporary striping that often took place in the median area, and temporary K-rail was used to protect the workers and motorists. 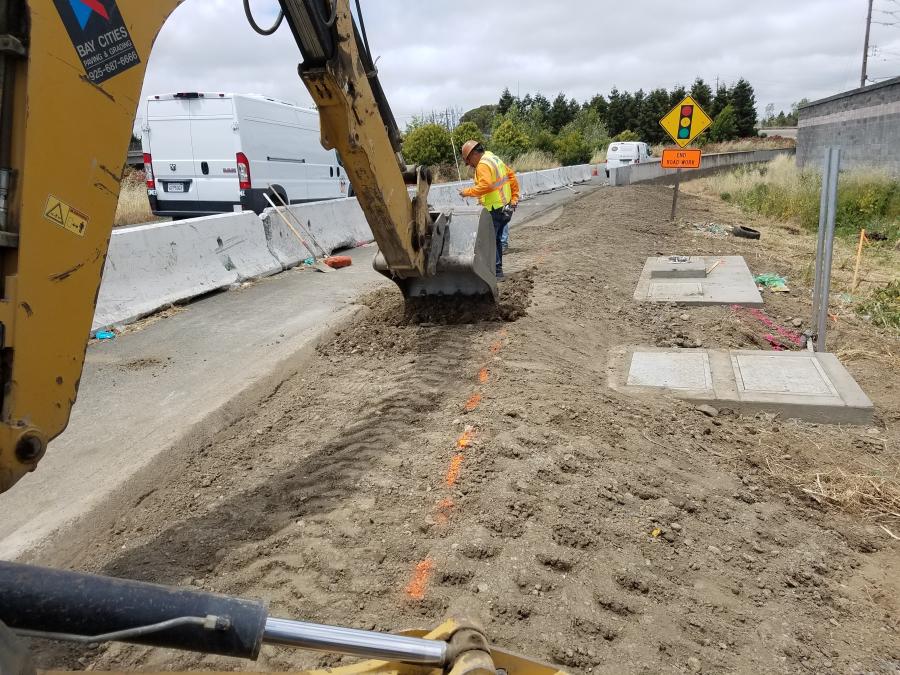 Bay Cities has a shop 40 mi. from the construction site and mechanics can easily be dispatched to it rapidly effect repairs.

"Our equipment is serviced daily," said Nott. It is fueled and lubed and the oil is checked daily. If there is a break down, it is usually repaired the same day. It's a team effort. If the operators or lube guys see something, they'll mention it."

Equipment involved in the excavation of contaminated materials were cleaned at the end of shifts.

"A lot of equipment was rented for this project," said Nott, who noted that rented equipment was primarily serviced by the dealerships. "We have a long running relationship with our dealerships — they appreciate our business as much as we appreciate theirs. Open and honest communications are crucial and we try to give them as much lead time as possible – we don't call them up and say that we need this piece of equipment tomorrow.

"We want to give them advance notice, especially during the busy seasons so they can meet the demands of their clientele," he added. "Planning ahead and scheduling our equipment needs is a big thing."

With so many variables out of Bay Cities control, patience was key to managing this multi-year project.

"We are adjacent to ongoing Caltrans projects and you have additional MTC projects like the Tolling System Integration contract," said Nott. "Their work impacts our schedule to some extent. It's all about coordination and seeing the big picture to get things done."

Two of the five weave lanes did not require any construction, with the other three connected to the widening operations.

The road work was complicated due to the drainage and electrical infrastructure that needed to installed or relocated. Pulling new fiber optic line for the express lanes was important.

"A lot of it was supposed to be pulled through existing empty Caltrans conduit, and some of the existing conduit was not where it was shown or could not be used," said Nott.

A majority of the widening work occurred adjacent to sound wall and for the road work adjacent to homes and businesses, a public outreach campaign notified people when the operations would take place.

I-880 is owned by the California Department of Transportation (Caltrans), including the right-of-way, but the MTC operates the express lanes. The Bay Area Infrastructure Financing Authority (a subgroup of MTC) is funding the project. The MTC is the transportation planning, financing and coordinating agency for the nine-county San Francisco Bay Area. 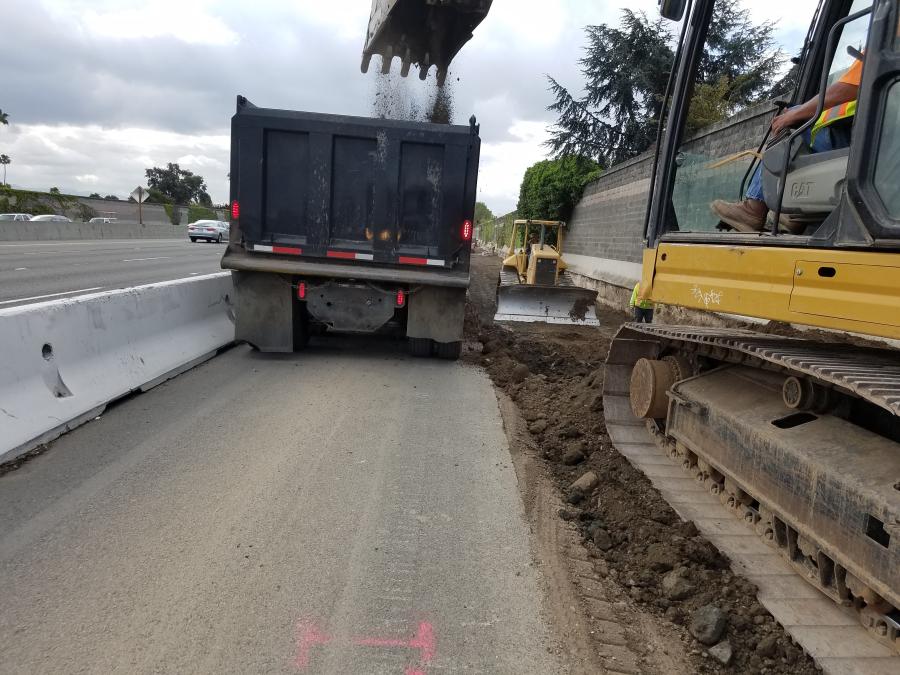 Prior to the work, the section of I-880 was five-lanes in each direction throughout most of the corridor.

The promotion of carpooling to help reduce traffic volumes on a stretch of highway that carries some 300,000 cars and trucks daily is a crucial element. A new toll ordinance adopted by MTC last January calls for cars with three occupants to be exempt from the toll, while those with two occupants will receive a 50 percent discount, and solo drivers pay full price.

"Given the incompatibility of promoting carpooling while also encouraging social distancing during the Covid-19 pandemic," said John Goodwin, assistant director, communications of MTC/Bay Area Toll Authority, "MTC may opt to delay the introduction of tolls for two-occupant vehicles until sometime after the Express Lanes open for business."

Between 2015 and 2040, the Bay Area's population is expected to grow about 25 percent and employment about 17 percent.

Caltrans points out that express lanes allow for more reliable trips; ensure use of all lane capacity; reduces carpool cheating; provides tools to manage traffic flow and give more vehicles the opportunity to use the lanes; grows the carpool lane network; and funds operations and maintenance with user fees.

The project was designed by HDR, Inc. Key concerns regarding the construction plan were coordinating the effort with ongoing projects in the corridor and I-880 traffic volumes and patterns - heavy truck traffic and commute traffic.

"Protecting express lanes infrastructure from inadvertent damage was important," said Goodwin. "The approach to dealing with all these issues was creating partnerships with other projects/agencies and communicating extensively to identify and resolve any issues."

Social media and email are being utilized to inform motorist about construction and traffic updates. Temporary lane closures continue as the work proceeds, particularly for night operations.

The tollway systems are being installed and tested by TransCore.

This work is being done at night via lane closures by Independent Structures, a subcontractor with vast experience in this field. These operations will have crews using boom lifts.

"They've been doing this on multiple corridors and are proficient in their means and methods," said Nott. CEG