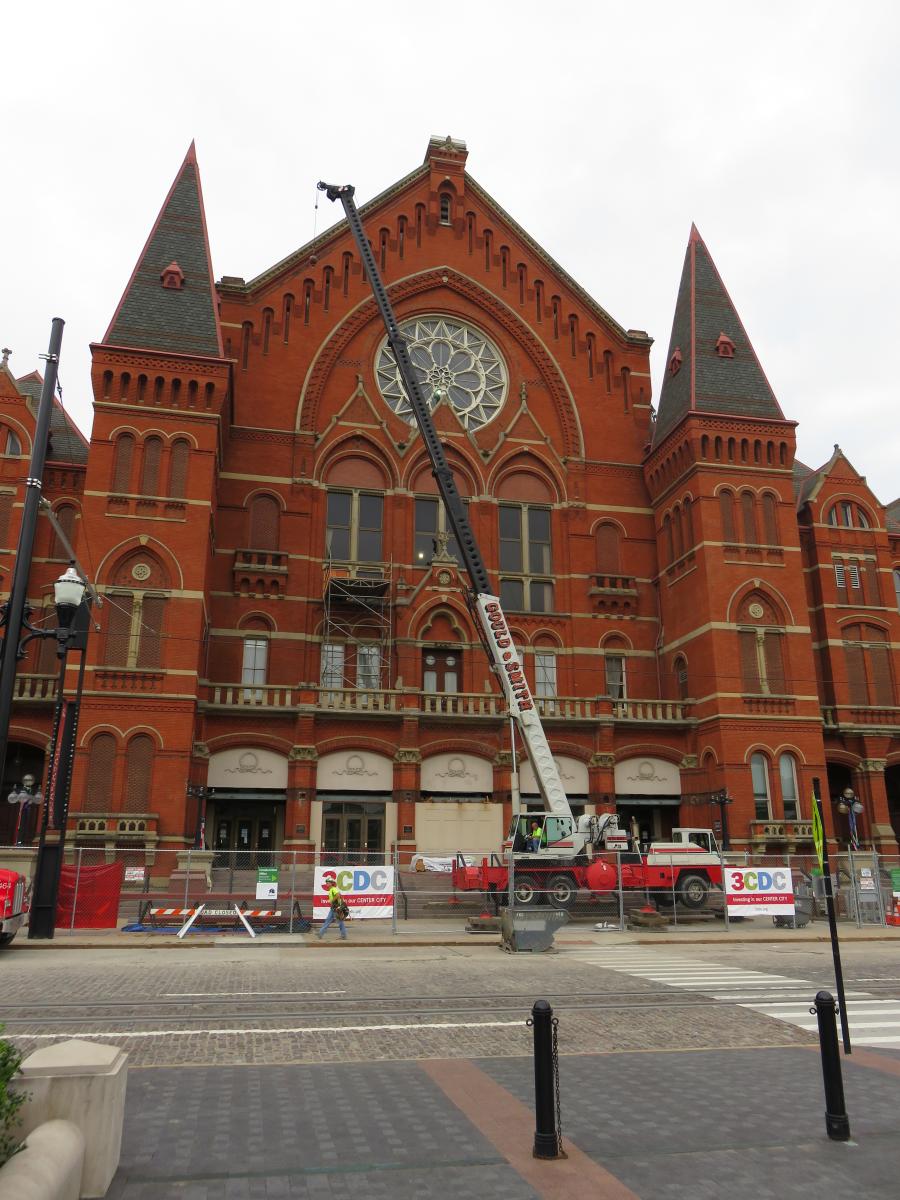 The Music Hall in Cincinnati — owned by the city, built in 1878 and designated as a National Historic Landmark in 1975 — is nearing the end of a $135 million-plus renovation.

The Music Hall in Cincinnati — owned by the city, built in 1878 and designated as a National Historic Landmark in 1975 — is nearing the end of a $135 millionplus renovation. The Cincinnati Center City Development Corporation (3CDC) awarded the contract to Messer Construction Co. in 2015.

For decades, this historic, iconic home to Cincinnati's renowned performing arts organizations has been surrounded by blight and is itself in need of significant functional upgrades. Cincinnati, the building's tenants and patrons, and the residents of the surrounding low-income neighborhood have long recognized its ability to create jobs and provide cultural enrichment to the community, according the 3CDC website.

3CDC, a non-profit real estate company, bringing neglected buildings and spaces in our center city back into use, has partnered with the city to complete the exterior and interior renovations to the 225,000-sq.-ft. facility to expand Music Hall's programming capacity and its ability to engage with the surrounding community.

“Music Hall hasn't had a major renovation in over 40 years,” said Scott Santangelo, Music Hall's director of operations. “Its MEP/HVAC systems were layered on top of still older equipment, and have exceeded their life expectancy. As we worked through the years of pre-planning, we were experiencing various system failures that were impacting client events and daily building operations. Today's renovation takes advantage of the opportunity to not only replace these systems with more efficient hardware and technologies, but to re-imagine the way they are installed and distributed.

“Music Hall is actually three separate buildings, and PWWG, our lead architect, has been brilliant in their approach and attention to those details,” he said. “Structural reinforcement of the original building materials has also been made possible by the scope of the project, allowing us to replace old wood balcony trusses with steel, reinforce and stabilize the sandy foundations, and modernize the stage grid and shop areas.”

The work also significantly improves accessibility, including new elevators at street level for anyone with mobility needs. The renovation adds 62 percent more restrooms and makes many other general improvements such as paint, repairs, replacing carpeting and reopening long-bricked windows in the historic façade.

“The proscenium and plaster work around the stage in Springer Auditorium has been restored and look better than ever, as are the fascias around the balcony and gallery levels,” he said. “The painted fresco and crystal chandelier remain prominent features in the center of the coffered ceiling, and all the signature architectural detail will remain, including the existing columns and their ornate capitals.”

Improving comfort in the Springer Auditorium was also a high priority.

“The seating was clearly not designed for 21st century audiences and was cramped and uncomfortable,” said Santangelo, “the facility's long-term viability required improvements to the seating, especially in the gallery.”

Maintaining Music Hall's old-world elegance has been crucial and when all is done, people will be able to stand in the beautiful Grand Foyer with its historic white marble and red slate floor and appreciate the attention that was paid to architectural details. The lobby will seem bigger due to the removal of the aluminum/glass partitions that formerly separated it from the North and South hallways.

Improved acoustics have been key to the upgrade, and the renovation team carefully selected firms with international reputations to maintain and improve the fine acoustics for which Music Hall is well known. Santangelo noted the patron's experience in the theater could vary dramatically depending on their location, and the project's acoustician, Akustiks, was determined to create an even, present sound throughout — one which conveys the full timbral and dynamic palette of the performers, and creates a more intimate experience between performers and audience.

“Sound and light locks will separate the auditorium from lobby areas,” said Santangelo, “insulating performances from ambient light and noise. The total cubic volume of the auditorium is thereby reduced, simultaneously eliminating pockets of the least desirable seats (tucked under the balcony and Gallery overhangs for example). The seating capacity has been reduced as a result, from 3,500 to 2,500 (with adjustable configurations). This is still considered large among the world's great concert halls and theaters.”

Professional and public input at many levels helped to prepare the design team vision. Due to its historic landmark status, there are restrictions on what can be done, and all renovation planning was submitted for review and approval at city and state levels — also critical to leveraging tax credits essential to financing the project.

Messer and subcontractor crews demolished an existing freight elevator and other sections of the building; completed most of the electrical work; and are nearing completion of the hanging ceiling in the Springer Auditorium - orchestra level and the balcony; have completed framing work of the South Corridor wall at the escalator and the south stair in the South Circulation area, with the framing of the bulkheads ongoing, the drywall ceilings on the first level in the North Circulation Area the border stenciling on the ceiling of the Corbett Tower has been completed, the installation of shower pans and the storefront in the receiving area; and the fireproofing work in the second rehearsal room has begun.

Other work recently completed dealt with the sub-floor demolition of the Corbett Tower and plaster repair work in the main lobby; installation of seat lighting and light fixtures and wood flooring in the auditorium; the painting of the Side Circulation areas; paint and resilient flooring work in the back-of-house/performer's support area; wall framing in the second rehearsal room; and the staining of the exterior brick.

Alexis Barnes, a 3CDC development officer and one of several project managers, said that Brian Campbell, Messer's project executive, is fully aware of the challenges of the project and has ensured that the project is on schedule.

“One of the initial challenges was when we tore up the Orchestra floor to integrate a new orchestra pit and encountered some human remains,” said Barnes. “The building was built on a former cemetery. We engaged the help of a forsenic anthropologist from the University of Cincinnati and the County Coroner's office. But we have always been running against a very intense schedule. We weren't able to fully shut down the building until June 2016 and we've had 14 months to get a 225,000-square-foot building completed.

“Essentially it's working with Messer and rethinking the schedules for different areas and targeting the auditorium and public areas to finish for the late August acoustic test and to complete what is left in October,” she added. “Repairing and restoring the historic plaster within the building is key component of the overall project scope. Making the building watertight and avoiding moisture intrusion from the exterior spaces has been a concern throughout, but has been mitigated by the design, engineering, and construction team.”

The exterior work focused on the roof replacement —main hall, south hall, part of the north hall and carriageways, as well as installing new glazing on the front façade (east) that had been bricked in over time.

“With the help of one of our donors we were able to restore the brick staining on the east and west façades so that it highlights the beautiful architectural details of the historic facade,” said Barnes. “It had been sandblasted over time. We also did all new concrete work for the main front plaza, got rid of an old access ramp that was blocking the main entrance and moved the main accessible entry to the south.”

The new roof consists of a carefully installed hand-nailed shingles that required serious time and effort.

“We wanted to maintain the historic look of the original building and bring it up to current standards with more contemporary finishes,” said Barnes. “We spent a lot of time and money to repair the interior's historic plaster and creating a new aesthetic as far as finishes and a paint scheme. This effort was largely driven by PWWG with the assistance of Martinez and Johnson and our historic consultant Judy Williams, who thoroughly researched the history of building and helped with the selection of light fixtures and other elements for the renovation.

“This project has been a collaborative process with the help of the design team, ourselves, Messer, the symphony/opera/ballet, Cincinnati Arts Association, Society for the Preservation of Music Hall, the city and the state,” said Barnes. “We vetted everything with everyone along the way with weekly meetings, monthly updates, emails, and double and triple checking.”

The work began with exterior, moved to the interior, and in the final months, has focused on exterior and interior elements.

“Brian Campbell knows what he is doing and is keeping us on target,” said Barnes. “He is great at figuring out schedule and sequencing and relating sequences based on the needs of everybody. We haven't had any delays, just re-arrangements of the schedule.”

Messer has also been praised for the efforts it has undertaken to preserve that historic elements of Music Hall from being damaged, including the red and white stone tile in the Main Lobby, which are now being cleaned.

The amounts of materials being removed and brought are still being tabulated as the work progresses.

SSRG has been instrumental for the repair and replacement of original materials and finishes, helping with waterproofing and brick staining.

“They found the right shade for the staining and they are really the experts in their field,” said Barnes. “They helped us source the right products and materials to complete the job.”

For much of the work there has been an average of 200 people on-site, which is now at the 250 plus level as deadline approaches. There has been very little night work, with the majority of shifts being 10-hour days and some weekend shifts.

Messer helped save time by changing the plan to use giant lifts in the auditorium to repair the ceiling and using scaffolding instead, which allowed more workers to access the work area.