Cleaning Up One Million Cubic Yards of Dirt 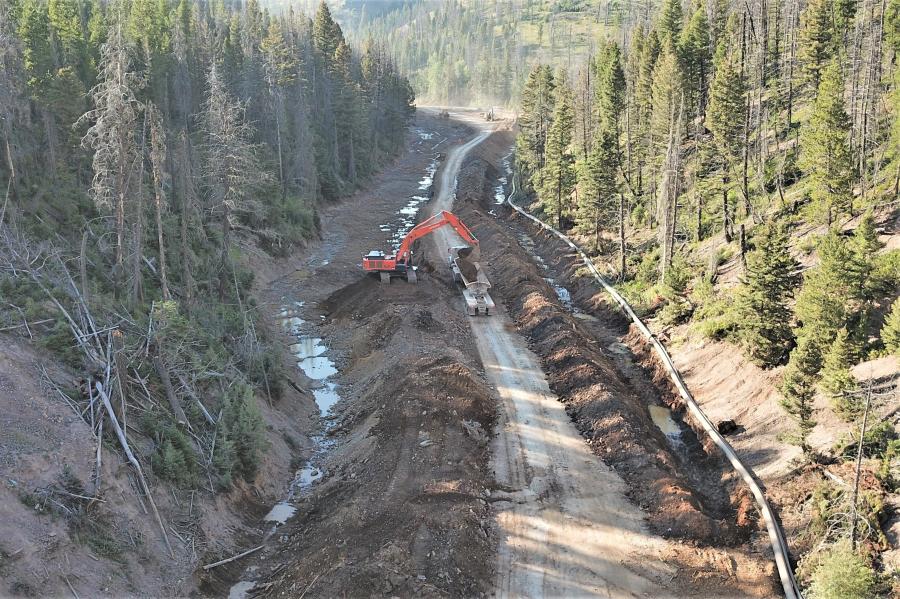 An MRC excavator loads a haul-truck. The creek is contained in the 19-in. pipeline to the right and the mounded material on which the excavator sits, as well as the roadway itself.

They crank up their heavy machinery each work day in isolated, timber-screened mountain canyons of western Montana. Travelers on interstates or freeways cannot gawk as they pass the project because the work only intersects glancingly with a lightly traveled state highway. Large-scale but low-profile, out of sight and mind — the massive Upper Blackfoot reclamation project goes on year after year under the radar.

The work itself dates to 2013, but the history really goes back to 1898 when a lead and zinc mine was developed in the crease of a mountain range drained by Mike Horse Creek. The mine was expanded in 1919 and reached peak productivity in the mid-1940s. In 1941, a dam was built below the mine to contain the water-borne tailings. However, that earthen structure failed in 1975 after heavy rains inundated it. Contaminated water and a portion of the mining debris spilled into the drainage plain and migrated down the valley. 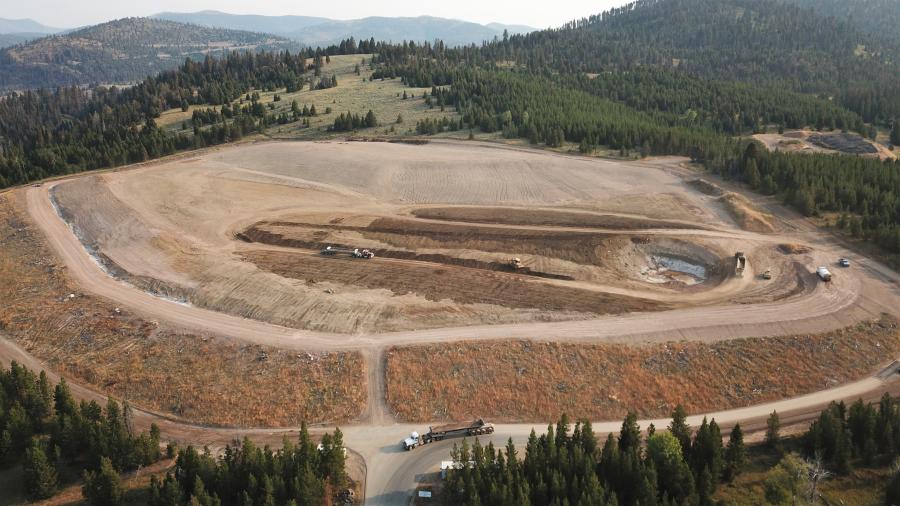 In ensuing years, the environmental damage to the headwaters of the Blackfoot River — and to the cutthroat trout living therein — became undeniable and mining and smelting companies responsible for it tried to mitigate the disaster. They ultimately failed and a $39 million clean-up settlement was reached in 2008 with the state of Montana and the U.S. Forest Service. Remedial and restoration work began in earnest five years later.

The task is two-fold: remove poisonous sludge and mining debris deposited downstream in 1975, then reshape the scraped and dug-up valley floor into something resembling a natural mountainous habitat. Two Montana agencies preside over this transformation: The Department of Environmental Quality is responsible for the remediation and the Natural Resource Damage Program superintends restoration.

The question is, will anyone 50 years from now appreciate all this remedial work in 6 sq. mi. of an isolated mining district boasting such intriguing creek names as Mike Horse, Bear Trap and Anaconda? Dave Bowers believes they will.

Bowers is project manager of the Waste Management and Remediation Services Division of the Montana Department of Environmental Quality.

"I don't think they will remember who did it or anything like that, but they will appreciate our restoring the fish habitat and getting things up and running at the headwaters of the Blackfoot River," he said.

Running Out of Money

Some underlying tension is playing out at this stage of the massive clean-up. The millions of dollars anted up by the mining and smelting companies are running out before the work is finished. Some four percent of the contaminating tailings made it all the way to wetlands at the lower end of the spill area and cleaning up those tailings is not part of the existing budget. Bowers said the state is trying to find additional funding for that wetlands work. 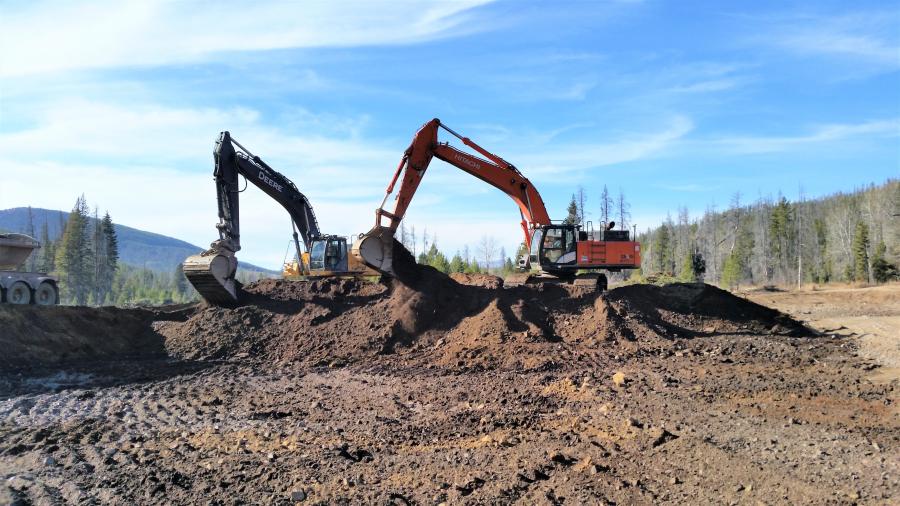 "We definitely have run into some surprises," he said of the extra time and money involved in the cleanup. "We have removed twice as much mining waste as was negotiated in the bankruptcy settlement. We've had to move a lot more. But as far as what we are obligated to do, we are going to get that done. We're going to remove all the waste from the flood plain and restore the plain and channel. We should compete that this summer."

One of the factors extending the project is the weather, which limits work days. In 2018, for example, work crews could only move dirt from the middle of July to the middle of November, a four-month working season. This year, contractors are hoping to start work earlier — on June 1.

"We have to deal with Mother Nature up there," Bowers said of the work site's 5,000-ft. elevation. "We're right on top of the Continental Divide. So, the construction season is short to begin with and is easily interrupted. We're at the mercy of the weather."

Here's one indicator of how unworkable the site can become in winter: The Mike Horse Mine site is just a holler away from the location that holds the record for the coldest recorded temperature in the lower 48 states — minus 70 degrees, a record set in 1954.

Headquartered in Helena, the company is tasked with removing tailings that are several feet deep in some places, as well as soil that has been thoroughly contaminated by such elements as aluminum, cadmium, arsenic, zinc, lead and copper. In the beginning, water running below the closed mines was an unhealthy shade of yellow and rocks wore copper and aluminum coats. Some 400,000 cu. yds of waste that can only be described as gray goo has been dug up and hauled away. 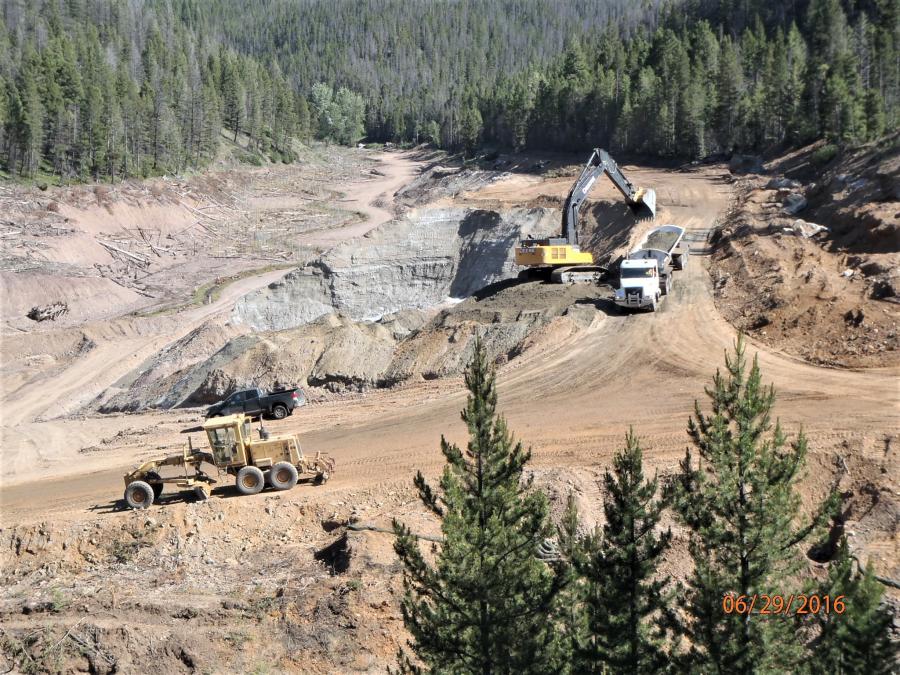 Miller points out that the impounded goo and poisonous matter behind the dam was 40 to 50 ft. deep, perhaps 10 percent of which rushed down the floodplain when the earthen structure gave way.

"The tailings downstream ran from six inches deep to probably 10 feet deep. Nothing would grow in it," Miller said, describing the transformation under way. "Now you would never know it. Wait four or five years when the grass grows up and you won't know this was once a wasteland."

At the dam, the waste deposit was spread five or six hundred feet across the plain, whereas this coming summer's work site lower in the plain will be perhaps 60 ft. wide. The clean-up crew started phase one at the dam, where the contaminated material was 50 ft. or more in depth. Each subsequent season, they cleaned up at descending elevations to keep the pollutants below them so rain couldn't wash "dirty onto clean."

The work site is populated with 10 or so wheel loaders, excavators, articulated trucks, dozers and water trucks manned by a crew of about 20. The Missouri River Contractors machinery is mostly Deere-branded, though Caterpillar and Hitachi also are represented. A fleet of eight tractor-trailer rigs cart away the excavated waste 18 cu. yds at a time, hauling it to a carefully constructed repository some 10 mi. away off state highway 279. Fifteen to 18 truckloads of waste are transported each work day, which last summer added up to more than 170,000 cu. yds. 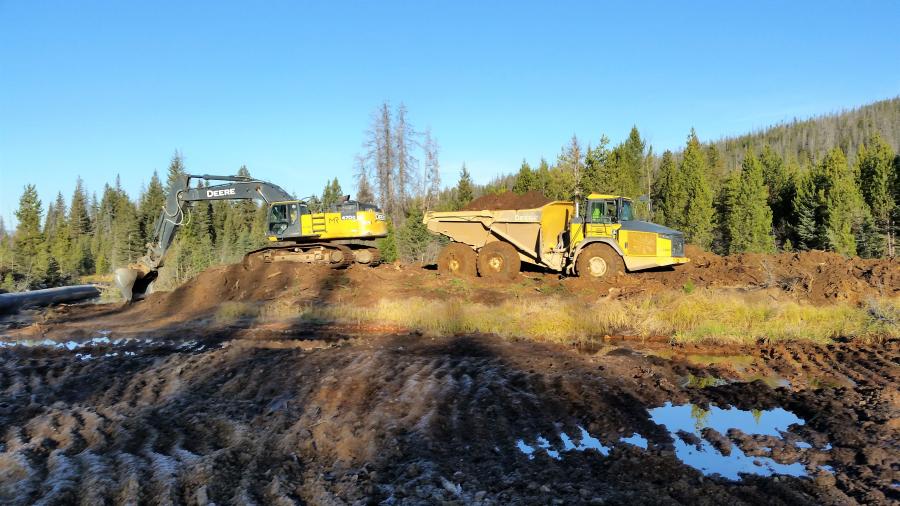 The haulage is highly contaminated, of course, so care is taken to contain it and to protect those working around it. Trailers are tarp-covered to reduce wind-blown transmission of pollutants. Truck drivers keep their windows rolled up. Water trucks suppress dust. Masks aren't generally worn, but hygiene is stressed — smoking and chewing tobacco are discouraged to keep hands away from the mouth.

"A 40-hour training course was sort of summed up as just don't eat the dirt," Miller said.

At the repository, a decontamination person operates a compressor and blows grit and dust from truck tires as they pull away empty. A stretch of roadway leading from the repository was paved and is kept clean to reduce tracking of polluted material onto a public highway. The repository itself is situated atop glacial and volcanic strata that are said to be virtually impermeable, thereby preventing leakage into an underlying aquifer.

The hauled-in waste eventually will be capped by a thick layer of earth with a manmade liner placed atop it and another layer of earth covering that. The site someday will support vegetation, though trees will be kept from sending down roots into the liner.

When to Stop Digging

One of the complications of removing the tailings is differentiating between the waste material and the soil beneath it, which also contains minerals. Bowers said knowing how deep to dig is rather difficult.

"The area is a mining district, after all, a highly mineralized area, and we do get into spots where there are low-grade deposits. I heard one guy say, ‘If we dig any farther, we're going to need a mining permit.'"

To guide them, geologists and contractors heed "multiple lines of evidence" to determine when they are transitioning from waste material into the alluvium. On-site geologists monitor such markers as the pH of the water, conductivity, and the presence or absence of pyrite.

"That's the challenge," Miller said, "knowing when we have reached the natural stuff and stop digging." 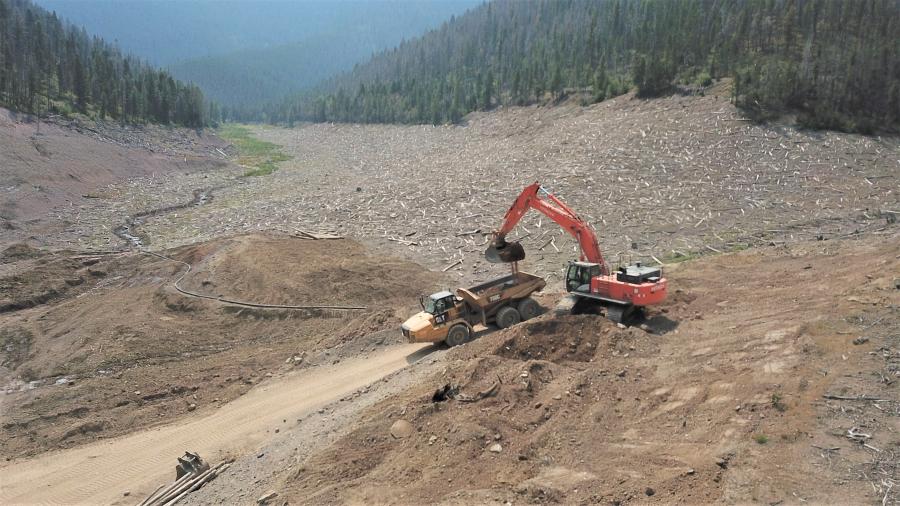 Once the offending material is removed, project labor changes hands. A subcontractor named Streamworks, based in the nearby town of Lincoln on state Hwy. 200, rolls its equipment onto the site. Using smaller excavators, the Streamworks team shapes the disturbed land mass into a natural-looking streambed. Grapples and thumbs at the end of booms precisely place native rocks. Eventually, plant matter from adjacent forested areas is transplanted amid shredded logs to let nature start reclaiming the valley floor.

"We have a botanist," said Bowers of the final phase of the restoration. He added that he has found "joy surrounding myself with some smart people — geologists, botanists, engineers and the remediation team that is lot of fun to work with including the construction folks. Missouri River Contractors is first-rate."

Bowers himself is a former Forest Service employee and English and history school teacher. His sense of history and a confessed love of the woods come together in his work in the Upper Blackfoot project.

"This land has existed like this for thousands of years. How do we get it back to a point where it supported fish and wildlife, to how it was before it was impacted by mining? That original condition is what we are trying to mimic as we put it all back in place," he said.

A minor final piece of the project is building a length of service road. Some of the tailings ended up in culverts and otherwise trapped in the roadbed. MRC will remove contaminated sections of the road — a few hundred feet at most — then bring in clean fill and reconstruct the rudimentary roadway.

Miller said the local community, including residents of Lincoln, by and large are supportive of the massive reclamation project. Public alarm arose when it became apparent that the contaminated material would have to be trucked on some stretches of roadway to reach the repository. However, the low-grade fears were assuaged by the various precautions taken to limit contamination.

As a fifth-generation Montanan, the 46-year-old Miller is all-in with the effort to restore the rugged land. He has a personal connection to the project: His great-great-grandfather mined these same mountains in the 1860s.

Now, the great-great-grandson of a 19th-century miner is helping to clean up the Blackfoot River tributaries and bring back the trout.