“It was like a bomb was dropped off in our lap,” Des Moines City Engineer Pam Cooksey said of the revised flood forecasts from the Army Corps of Engineers. 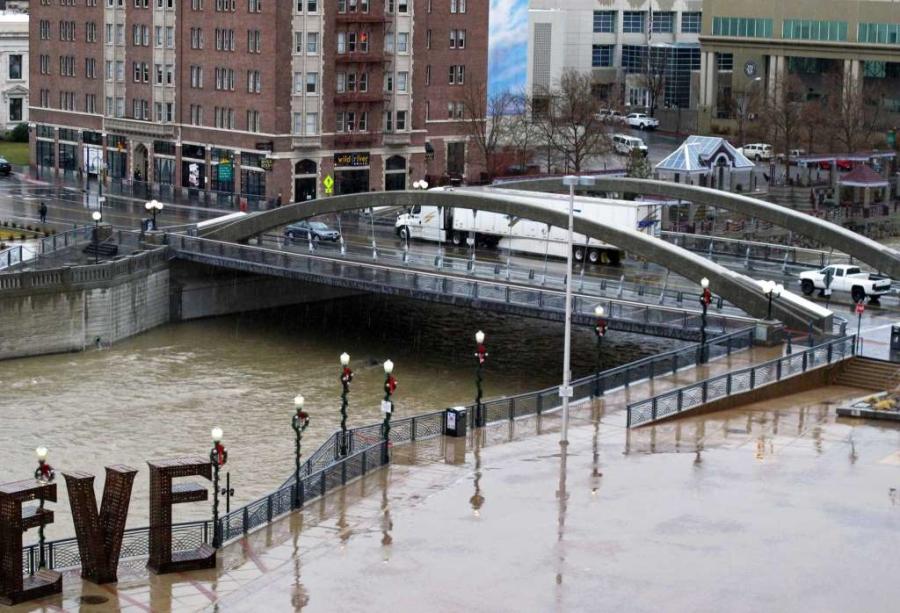 The Virginia Street bridge in Reno, Nev., above the Truckee River. (AP photo)

DES MOINES, Iowa (AP) A century-old train trestle stands as one of the trophies of Des Moines' push to spruce up its downtown. Bicyclists and pedestrians pose for pictures beside the brightly painted beams of the Red Bridge and gather on viewing platforms overlooking the Des Moines River.

But little more than a decade after it was restored, crews went back to the site with a crane to hoist the span 41/2 ft. (1.4 m) higher, at a cost of $3 million, after experts concluded that the river's flooding risk was nearly double earlier estimates. Climate change was likely to blame.

“It was like a bomb was dropped off in our lap,” City Engineer Pam Cooksey said of the revised flood forecasts from the Army Corps of Engineers. The findings suggested that the bridge could act as a dam during bad storms, sending waves of backed-up floodwater into the refurbished business district.

Climate change is often seen as posing the greatest risk to coastal areas. But the nation's inland cities face perils of their own, including more intense storms and more frequent flooding. Even as President Donald Trump has announced his intention for the United States to withdraw from a global climate agreement, many of the nation's river communities are responding to climate change by raising or replacing bridges that suddenly seem too low to stay safely above water.

The reconstructed bridges range from multi-lane structures that handle heavy traffic loads to small rural spans traversed by country school buses and farmers shuttling between their fields. The bridges are being raised even in states such as Texas, where political leaders have long questioned whether climate change is real.

In Milwaukee, bridges have been raised as part of $400 million in flood-management projects across a metro area with 28 communities. In Reno, Nev., officials spent about $18 million to replace a bridge over the Truckee River last year and plan to replace three more after flood-danger projections were increased by up to 15 percent.

Because the cities are inland, &#8220A lot of these are not the kind of places that people are used to thinking of being in the forefront of climate change,” said Jim Schwab, manager of the Hazards Planning Center at the American Planning Association, which is working with nearly a dozen cities on flood-mitigation options.

Many communities are “still feeling their way through this particular problem,” he said.

No one tracks how many communities are raising bridges or replacing them with higher ones, but the Federal Emergency Management Agency says it's now routinely providing money for this purpose, although no dollar total is available. Typically, more than 1,500 bridges are reconstructed each year for an assortment of reasons.

Schwab said he's sure hundreds and possibly thousands of bridge-raising projects have been completed recently or are planned. A cursory check by the AP in a handful of states found at least 20 locations where bridges have been raised or construction will begin soon.