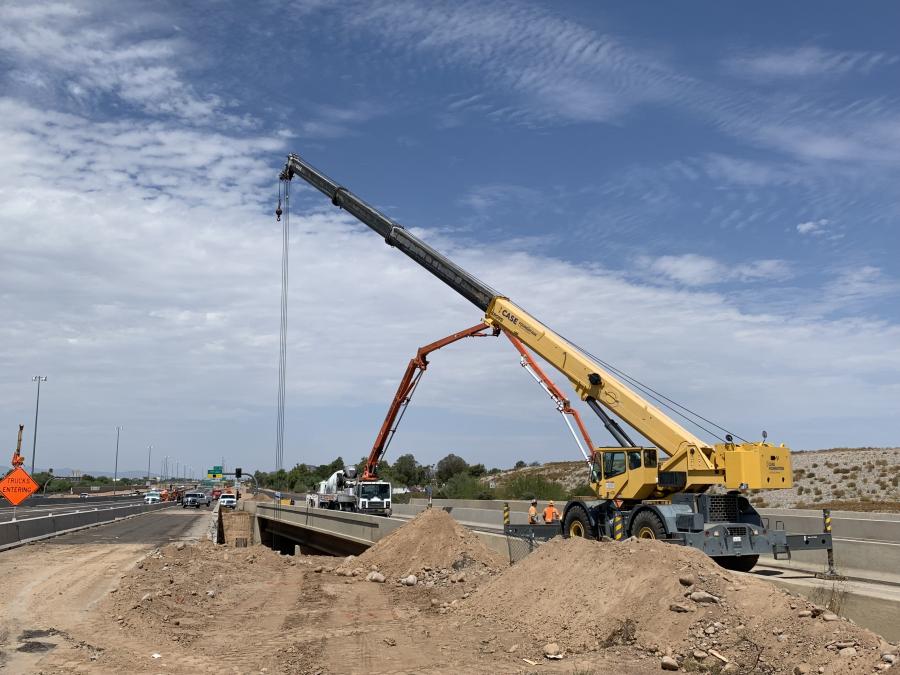 The Arizona Department of Transportation (ADOT) is overseeing a $185 million effort that will widen and improve the Loop 101 (Pima Freeway) from Interstate 17 in Phoenix east to Pima Road in Scottsdale. (ADOT Photo)

The Arizona Department of Transportation (ADOT) is overseeing a $185 million effort that will widen and improve the Loop 101 (Pima Freeway) from Interstate 17 in Phoenix east to Pima Road in Scottsdale. The project addresses mounting traffic demands in the northeast Valley, and will relieve traffic congestion on the Loop 101 during the morning and evening peak travel times.

"The need for new lanes is here, and, fortunately, so is regional funding to allow ADOT to do the work," said ADOT spokesman Doug Nintzel. "We're able to schedule work to limit impacts on major annual events in the area, including the Waste Management Phoenix Open golf tournament in January, so this is a great opportunity to build the new lanes. The nearby Scottsdale Airpark, which includes Scottsdale Airport, is one of the Phoenix area's major employment hubs, and will benefit from these freeway improvements."

ADOT works with regional planners at the Maricopa Association of Governments (MAG), which serves as the Phoenix area's metropolitan planning organization. Under the Phoenix area's regional transportation plan approved by Maricopa County voters in 2004, MAG sets the schedule for local freeway improvement projects, while ADOT manages the design and construction. Projects to provide added traffic capacity along the 60-mi.-long Loop 101 have been part of the region's transportation plan for a number of years.

"This is the second in what will be a series of Loop 101 widening projects in the Phoenix area," said Nintzel. "The first project, completed in 2016, added a fourth general purpose in each direction along 11 miles of the freeway, between Shea Boulevard and Loop 202 Red Mountain Freeway.

"This current project, scheduled by MAG, is designed to help the region manage growing traffic demands by adding a new lane in each direction from I-17 in north Phoenix to Pima Road in north Scottsdale. Our earlier project along another stretch of Loop 101 in the Scottsdale area has produced improved traffic conditions, and we expect that to be the case here, too."

The undertaking, which began in February 2019, is using design-build as the delivery method. The joint venture Coffman Ames is the primary contractor. Primary funding sources for the plan's projects are a regional half-cent sales tax, as well as the region's share of state and federal transportation funds.

According to Anthony Brozich, P.E., ADOT senior resident engineer, the project is moving forward at a steady pace.

"The project team is a few months away from completing final design. A lot of the first-year work has involved the establishment of work zones and material removal, including demolition of some outside barrier walls, along the 13 miles that are being improved. The widening of several bridges is under way.

"As with most projects, establishing work zones while also maintaining four lanes of traffic in both directions is a challenge. This project also requires several weekend freeway closures. Minimizing the impacts on drivers who use the freeway is a challenge, but we've worked very hard to keep the public up-to-date when it comes to restrictions and suggesting alternate routes."

"The overpass will be constructed along a busy stretch of the freeway between Scottsdale and Hayden roads in north Scottsdale. The contractor will have finished construction-bypass lanes along the outside of the existing freeway by late summer, so work can start on the new bridge over the future Miller Road. Our goal is to keep the traffic moving as seamlessly as possible, while the new overpass is being built in the coming year." 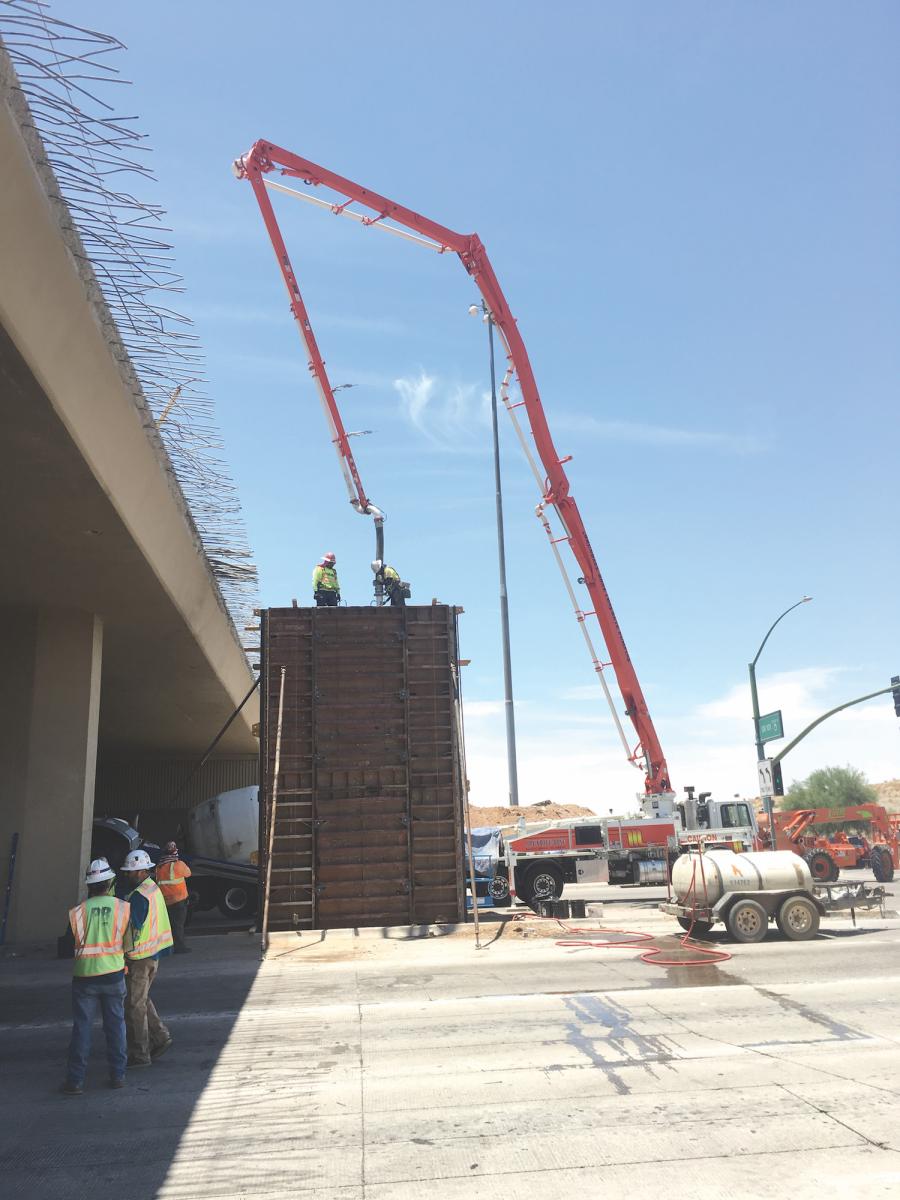 "It certainly takes a lot of coordination within our project team and also with the cities where these interchanges are located. We're reconstructing ramps so they fit the wider configuration of the Loop 101. We want to keep as many ramps open as we can while that work is taking place. But, in some cases, it's better to close a ramp and get the work done faster."

This stretch of Loop 101 was originally built with a number of sound and retaining walls. In some areas the freeway widening requires changes, so now workers must relocate or add walls where warranted, based on computer modeling. Most of the walls are designed in order for construction to start soon.

"The contractor team has had the job of milling the existing one-inch top layer of rubberized asphalt along the freeway," said Brozich. "That has been done through a series of weekend closures when work zone-related lane shifts also are put in place. Plans call for adding a new layer of rubberized asphalt along the freeway in a later stage of our schedule, such as fall 2020. A project like this requires adjustments to drainage systems in certain areas to make sure they still operate as designed to capture and move storm runoff to regional channels.

Right Equipment for the Job

As for dealing with outdoor conditions, ‘The good news is that the weather has not been a big factor with the project so far this year," said Brozich. "The Phoenix-area climate has helped. We had heavier than normal rain this past spring, but it hasn't affected the timeline. One thing that has to be accounted for are acceptable temperature ranges for operations, such as concrete and asphalt placement."

Although it's early in the process, some tasks have already been completed.

"We're done with the majority of design work. Crews have established work zones and set temporary traffic shifts. They've moved along with demolition and material removal. We have manufactured girders, worked on drilled shafts, abutments, landscape salvaging and started the relocation of Freeway Management System components, including fiber optic cable.

"Before we complete the project by early 2021, milestones will include the construction of the new Loop 101 overpass to carry traffic over the future Miller Road alignment, east of Scottsdale Road, to be in place by summer 2020. Crews also will finish abutment reconstruction work on the 15th Avenue bridge over Loop 101 to provide room for the new freeway lanes by late 2020. The primary feature of the project, adding new lanes in each direction along Loop 101, will be completed by fall 2020, when a rubberized asphalt surface layer is scheduled to be paved."

Brozich added that safety is the team's main concern.

"Our contractors take steps, including the installation of temporary barrier wall to create safe work zones, to protect workers and the traveling public. The speed limit is lowered from 65 to 55 miles per hour. We also communicate with the Arizona Department of Public Safety on patrols along the work zone.

"Quick clearance of any crashes along the tighter work zone is a priority, since a timely response can reduce the risk of secondary incidents. The team will regularly look for ways to improve upon current efforts as traffic patterns change through the remainder of the project's schedule."

For Nintzel, the minor inconveniences are outweighed by the benefits area motorists will enjoy in the long run.

"This stretch of Loop 101 has its rush hour challenges, with slow and go traffic during peak travel times. The additional Loop 101 lanes will certainly provide more room for traffic in the Phoenix area's north Valley. We can't end rush hours, but drivers can look ahead to improved traffic flow, once the project is completed in 2021." CEG